The annual Xmas game in North Devon was something a bit different, something you come to expect when Chas invites you over to his place. The game was based on the raid carried out by the James-Younger Gang on September 7th 1876, see the link for more details. 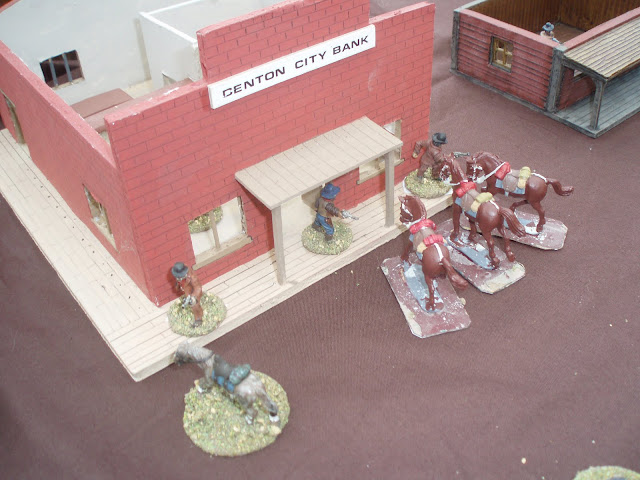 The gang led by the infamous Jesse James and Bob Younger decided to do a job in the North, so it was rather amusing to find after randomly assigning characters to players, that the gang were run by the South Devon contingent of me(JJ), Steve M, and Vince vs the North Devon citizens run by Chas, Clive and Nick.


As in the original raid the start positions had Jesse, Bob and Clell Miller in the bank holding up the staff, the other gang members were in two groups guarding the route out of town should things "kick off". As the gang we needed a quick resolution of the hold up (decided with a die roll each turn) before to many townsfolk became aware of the raid and decided to take up arms against us. The gang managed to grab the cash by turn two and Bob and Jesse were on their horses ready to leave. Clell, however chose to adjust his saddle just as the alarm was given and was immediately shot in the back by a citizen wielding a six gun as he came out of a neighbouring building. 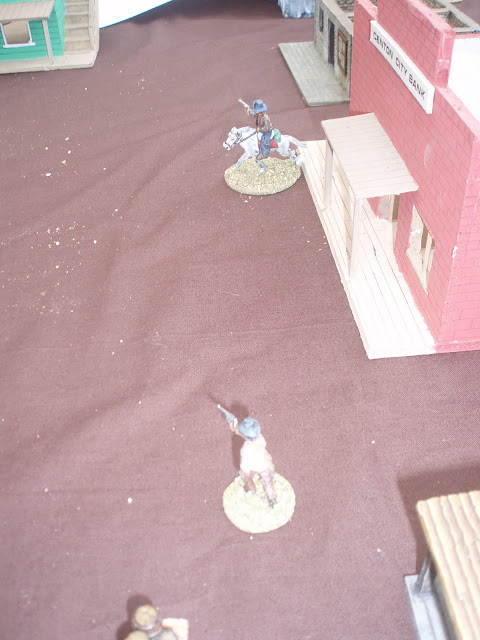 What followed was a painful battle up the centre of town as the two leaders gradually worked their way towards the bridge out of town, fending of shotgun/rifle wielding enraged townsfolk taking potshots. The other gang members gave support fire from the bridge and the stagecoach(conveniently parked up in the town), and using innocent unarmed townsfolk as cover enabled the gang to move without actually killing anyone. 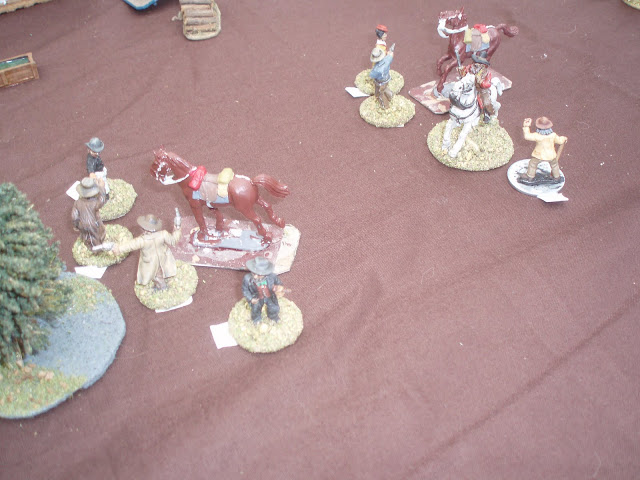 The game reached its climax as the final dash was made for the bridge and safety. Both sides upped the anti with a local "pistolero" fanning his six gun at the robbers, killing Cole younger, and one of the gangs horses. In return the gang now started to shoot to kill in an attempt to relieve the pressure on their rearguard, felling four townsfolk in two turns, with citizens being ridden down on the bridge by Bob Younger as he left his gang to get out. 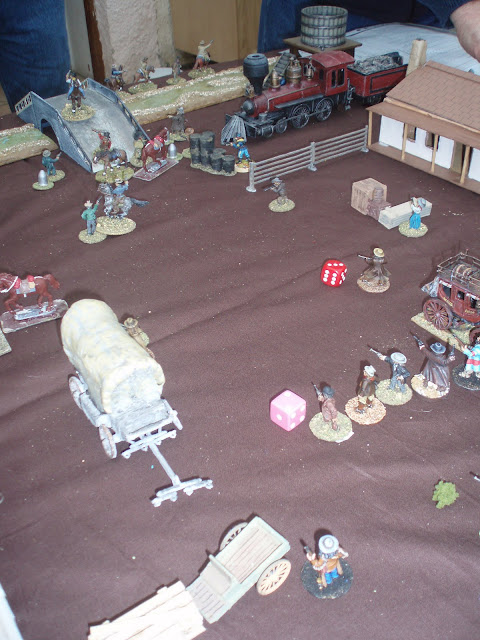 In the end the gang were able to make good their escape leaving two of their number dead and six murdered townsfolk.


Really enjoyable game, thanks to Chas, Clive and Nick for setting things up.
Happy new Year
Jon
Posted by carojon at 13:06