Black Hawks Down in Mogadishu - Force on Force

This weekend saw our annual trip up to North Devon for our Summer Game which had added significance this year as our host, the gentleman that is Mr Charles Carter, recently celebrated his 60th, so it gave us a chance to have a lot of fun with a jolly nice chap. Thanks Chas, a great day, good times.

So to the game. I have included the briefing sent out to all players with the relevant orbats and victory conditions. As you can see a very powerful US Ranger and Delta Team task force are tasked with extracting the persons of interest, whilst subduing if necessary any armed resistance, which seemed likely following the shooting down of one of their Black Hawk helicopters.

This shooting down has also necessitated the rescuing of the helicopter crew from the crash site. Our game started as per the brief with the Ranger teams securing the buildings around the Olympic Hotel and fast roping onto the crash site (see the map for approximate positions).

The American force were taking no chances as their motorised convoy headed in from the north on Highway 1 and all troops were on over watch as they nervously looked out over the apartment blocks of down town Mogadishu. The tension was rising like the smoke from the barricades of burning tyres at the southern end of Highway 1 and as the Ranger team approached  Black Hawk Super Six - One it "kicked off". 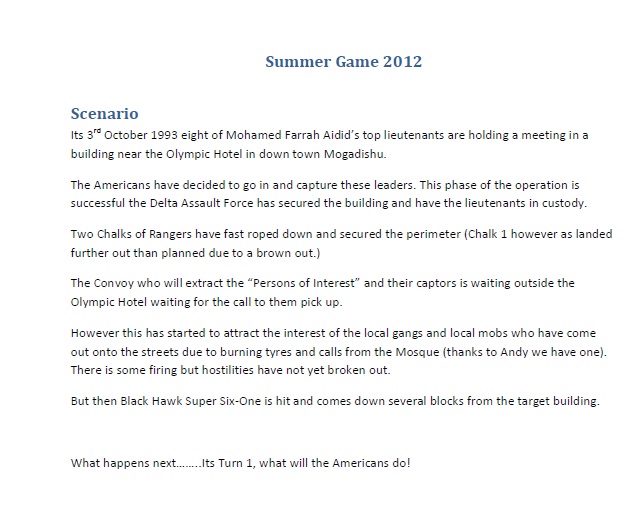 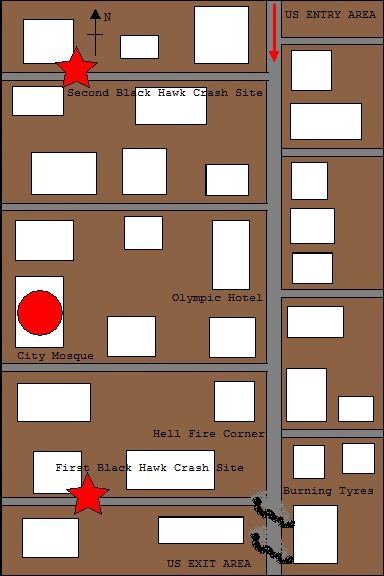 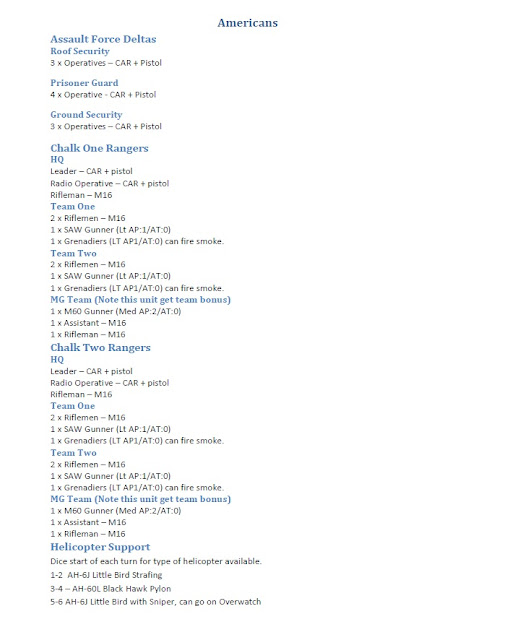 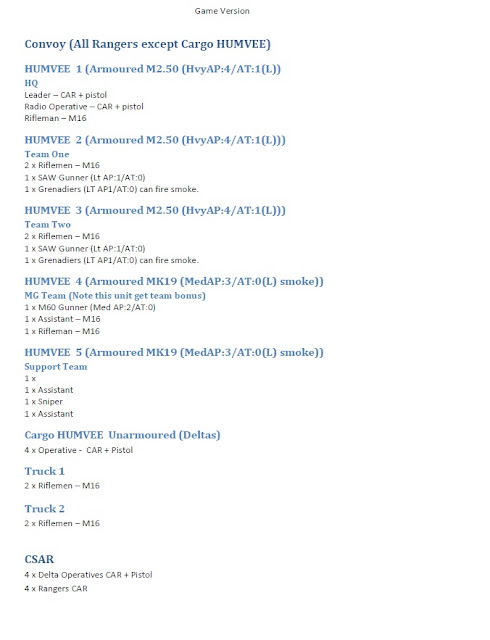 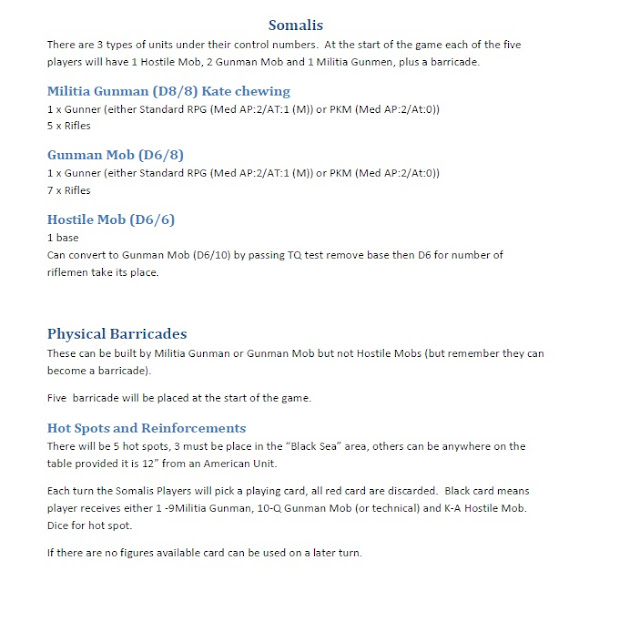 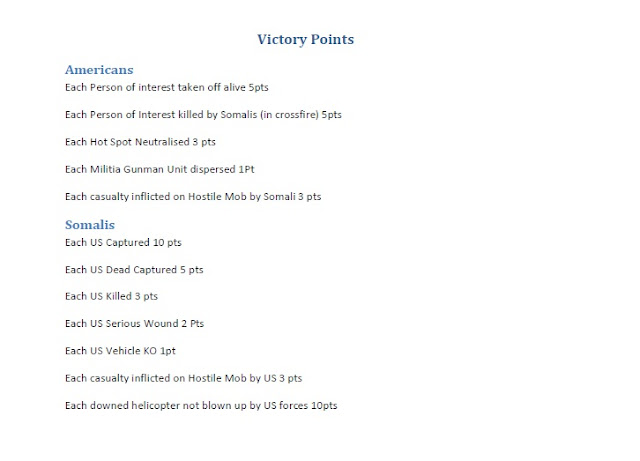 As the Rangers closed in on the crash site and started to assess the crew casualties the first shots rang out from nearby buildings as Somali militia gunmen opened up with small arms fire.

The Ranger teams coolly took on the militia groups and drove them off with well directed return fire. First round to the Americans.﻿


As the US motorised convoy entered town, the Somali forces gathered in nearby streets, along with mobs of angry citizens mixed with traders and goat herders just trying to mind their own business. These obstacles made life difficult for US forces when attempting return fire, as any casualties on civilians were a gift of points to the militias.﻿

As the Americans edged into town the US air support kept over watch, taking occasional anti-aircraft fire from below. This was sufficient to allow the militias to rapidly gather ready to ambush the Yankees.

Three moves in and the Somalis struck. An angry mob coming in from a side road threatened to disrupt the approaching convoy. US troops were forced to debus and attempt to disperse the crowd. This they managed to do but as the crowd dispersed, further shots were fired from militia in nearby buildings, killing one US Ranger.

Meanwhile further down the main highway, the Rangers in their attempts to clear nearby buildings approach a block of apartments covered by an their machine gun support team. The second ambush was sprung with three militia groups able to pool their fire on to the lone Ranger squad and causing a second casualty, forcing the group to fend off their attackers whilst attempting to remove their wounded colleague.

With the battle raging at one end of the street and another at the other end, the US commander having got a sit rep from his group leaders demanded over the radio that any further movement must be done under the protection of over watch groups. The Americans then brought up the HUMVEE's to add their fire support to free the Rangers in the first ambush zone.
The security teams at the Olympus Hotel were bombarded for requests for over watch fire support as the Somali attacks grew in intensity.
The battle at the second junction, swiftly becoming known as "Hellfire Corner" was becoming a death trap for the Rangers there trying to free their wounded. With support from further up the road looking more unlikely, the US commander put in a shout for a strafing run from one of the circling Black Hawks in a desperate attempt to relieve the pressure on his men.
The Somalis were getting the measure of the Yankees. With the majority of the US teams on over watch fire, the militia were throwing in multiple attacks at the same point, which was wearing down the hard pressed Rangers ability to keep up the quality of their fire support. Eventually with their over watch degraded up would pop a "kate" chewing elite group of militia toting an RPG or heavy weapon and pop off another Ranger.

The Somalis numbers had grown significantly as the game progressed and thus their anti-aircraft fire became more potent. As the second Black Hawk strafing run came in over the city, the second helicopter was shot down crashing at the north west corner of town. This was was a body blow to US morale, forcing them to change the plan and get the VIPs out from the North and pull out the wounded and crashed helicopter crews at the same time.

The second crash site had to be secured and quick. The race was on to get the crash site secured and Lt Chas "Dutch" Carter was just the man for the job leading his four man team in the direction of the wreck. A shot rang out and over US radios the call no one expected went out. "Delta Team, man down", its Dutch!!

Not only that but now the HUMVEEs were taking hits, two being quickly disabled and with the truck brought in to carry out the VIPs taking damage the convoy was now only able to limp along at half speed.
The final moves of the day simply confirmed a crushing defeat for US ambitions in the horn of Africa. The last futile attempt to get their wounded away simply added more Rangers to the growing list of MIAs. Around 12 Rangers fell into Somali hands many lightly wounded facing being paraded in front of the worlds media. The arrest and detaining of the "persons of interest" seemed of little consequence given the losses US forces had sustained. This was however at great cost to the Somalis whose dead and wounded were littering the roads and streets near to the Olympus Hotel.
The following day after the Battle for Mogadishu, we all enjoyed a super cooked breakfast and headed down to the Cobbaton Tank collection which is close by. On the way out Vince showed off a Hungarian paratroopers light AK47, surely not a trophy from Mogadishu? 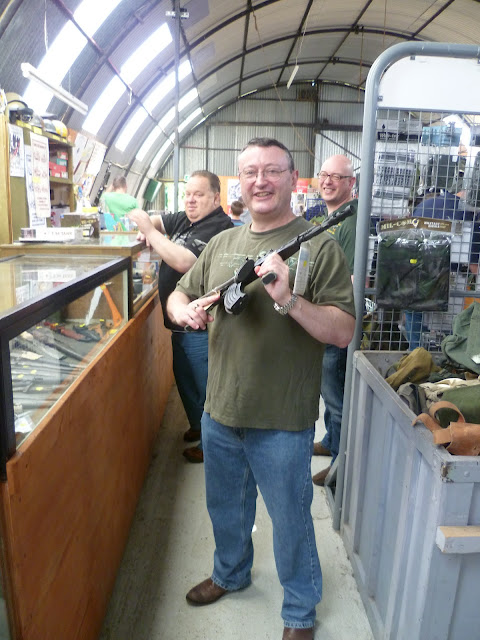 The collection of vehicles and weapons are well worth a visit if you are in North Devon, and I took time to grab a shot of a "rare beast", a Challenger 17lbr tank 1944 vintage. 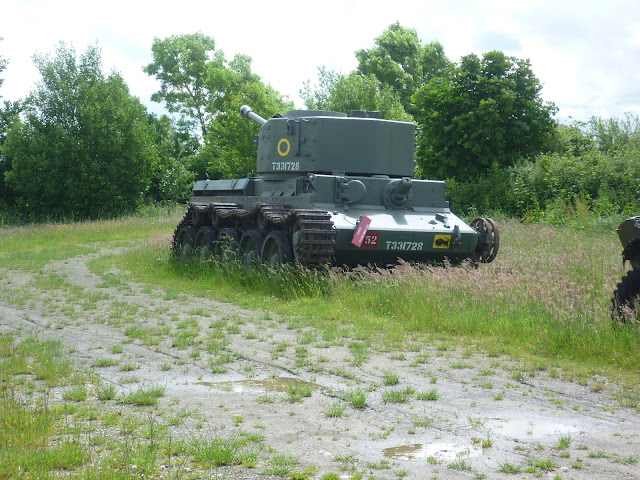 A fun time was had by all, good company, great banter, and great fun. Thank you to Chas for pulling together a fun days entertainment, and thanks to Andy C, Andy W, Vince, Nathan, Steve, Nick, John and Clive for making it happen. 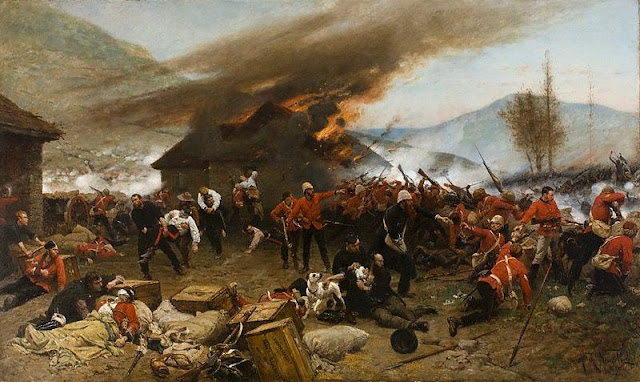