November saw Chas, myself and Andy B put on a scenario from Operation Barbarossa, using "Flames of War" rules. Jason joined in because no one else wanted him.

It was a 3000 point a side game, with the Soviets fielding a battalion of tanks (including 5 monster T 35's and 11 T 28's) and a battalion of infantry, all with attendant supporting arms.

The German force was more modest, with a tank company, supported by a company of panzer grenadiers and attendant supporting forces (including priority air support - Stuka schwerpunkte).

The scenario was an "encounter" battle, so half the platoons on both sides were deployed on the table, with the rest being delayed and scattered reserves (roll for entry from turn 3 and dice for where each platoon arrives).

Initial deployment saw 33 Soviet tanks facing 6 panzer III's and 3 armoured cars. The Soviets raced forward and the German pioneers raced onto the central hill objective and did what pioneers do best, dig in !

The German armoured cars were wiped out by a company of T 28's. The German motorcycle recce on the other side of the table saw two companies of Soviet light tanks and decided discretion was the better part of valour.

The German tanks went firm and shot it out with the T 26's and BT 5's, inflicting serious loses and sending a company of T 26's and one of BT 5's packing. The wave attack rule came into play and the BT 5's reappeared, at full strength, as if by magic !

A platoon of T 35's and a horde of infantry joined the Soviets and a platoon of Stugs bolstered the Germans facing the T 28's (much to Chas's relief). 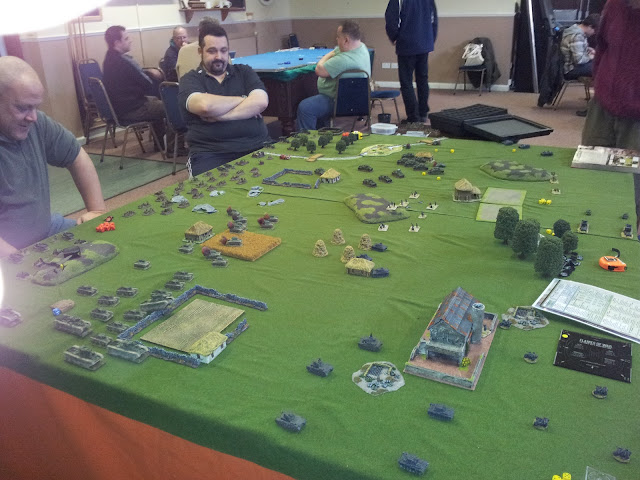 The shooting contest started again and the new BT 5 and T 35 companies suffered the same fate. 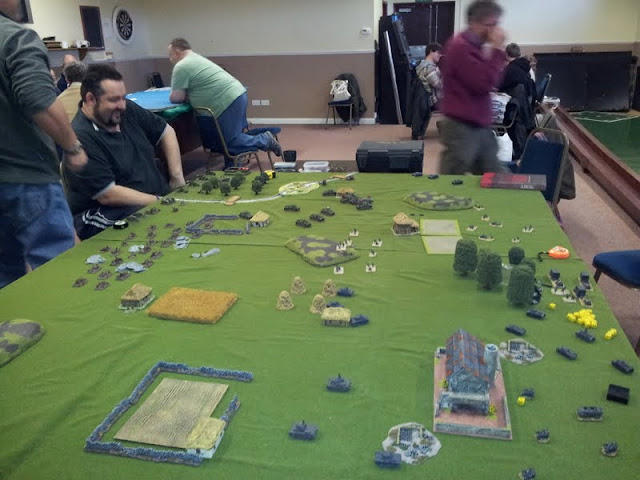 The above picture shows the point when the Soviets conceded. Chas can be seen leaving the scene, suppressing his laughter.

Quality beat the quantity this time, but it might have been a different story if the Soviets had refused to engaged in a long range shooting contest and had just rushed the German positions.


Just to show there were no hard feelings the Soviet players posed for a picture with "Chuckling Chas".