Yesterday at the club we played a game of Battlegroup Kursk. I had been looking forward to playing this set of rules since their release late last year and having played an earlier reincarnation Kampfgruppe Normandy. 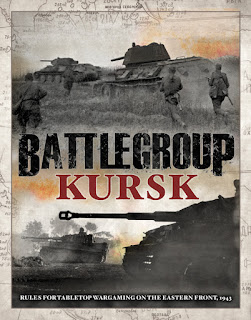 Our game set up was a "Meeting Engagement" with two forces composed of infantry and tanks approaching the battlefield from opposite corners of the table. The set up has four objectives identified which, possession of, determines victory and impacts the overall morale of the side that does not have control of them.

The initial set also takes into account the amount of recon assets each side possess to determine the how far on the two sides can advance their lead units. The German force having a platoon of armoured cars and recon infantry in half tracks dominated the recon of the position allowing the Germans to occupy three of the objectives at the start of the game.

The German recon victory had immediate consequences for the Russians as the three objectives now occupied plus their loss of the recon move meant they had to draw four chits. These chits generally have a number on them from 1 - 5 plus a few with special events such as air attacks, vehicle breakdowns etc. The number on the chits indicate that number of morale points lost to that side. These chits are also drawn when units are destroyed, when unpinning friendly units or when an objective is lost to the enemy. Thus the end of battle is predicated by the events of battle and the Russians having just lost 14 points were off to a bad start.

The success of the German recon also meant that the Russians would be advancing into an ambush zone set up by those same recon units, supported by German pre-registered artillery fire. In the end, as the T34s advanced on to their corner, it was the artillery that caused the first losses of a couple of T34s plus several pinned tanks. This was swiftly followed by an air attack from bomb armed FW190s who screamed in to add to the mayhem caused by the artillery.

The Russian tanks reeling under this barrage of fire responded as best they could by knocking out the armoured car platoon to their front. These pyres burned throughout the battle on the front line.

The rest of the German recon infantry resolutely awaited their support units and watched as the Russian armour struggled to regain its composure to recommence their approach to the Farm. They were able to choose their moment to strike, as being recon units in cover made them difficult for the Russians to spot and gave them multiple ambush opportunities.

As the T34s now supported by infantry and T70s closed in on the Farm complex the first German reserves started to arrive led by a formidable Tiger platoon.

It was now time for the Russian artillery to enter the battle and they reserved their greeting for the Tigers. The Russian CO obviously had connections as he calmly picked up the field telephone and requested support from Army. The big Russian guns responded promptly and large calibre shells started to drop around and on the Tigers in the fields close to the main road, knocking out one of these leviathans. The mayhem caused was compounded by the Germans having put Panzer Grenadiers on the decks of their Tigers who were now scrambling for cover in the barrage and getting themselves pinned just when their support was needed.

Despite the success of the Russian artillery, events were moving to stifle their advance. The German reserves were coming on thick and fast to consolidate the gains made by the recce. The Panzers and Panzer Grenadiers were spreading out to deal with any threatened Russian penetration of the front line.

The Germans abilities in command and control were enabling them to build up their front line force quicker than the Russians could theirs, despite the distance across the table that the German units had to travel. The Russian force needed to break in to the German line quickly to regain the initiative or the front would solidify around the German positions.

The Russians having now got a solid group of armour and infantry up to the farm complex now commenced their main attack. Their initial preparation consisted of firing along their front to pin the German infantry and tanks prior to their assault. Then using their special tactics of "Stal Stal" allowing their armour to pretty well move en masse they threw it in at the recon elements occupying the Farm Complex.

This attack resembled the tanks rolling into the buildings occupied by Sgt Steiner's men in that classic Russian Front movie "Cross of Iron". The fighting was close up and personal, but this time the Germans held. Throwing in dice and chits to unpin their supporting units, the Germans were able to throw back the Russian infantry following up their tanks. 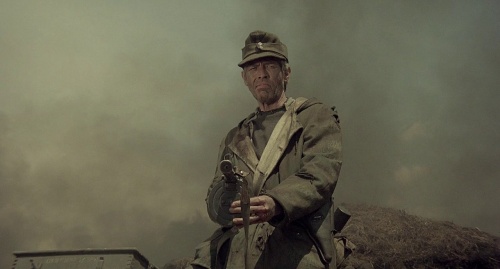 The Panzer Grenadiers who had come up with the Tigers launched a counterattack on the Russian infantry throwing them out of some workers houses, before they themselves were thrown back by more assaulting Russian infantry.

The Russian armour was held and as the German armoured cars continued to burn with the occasional pop of 20mm ammunition, the smoke of battle started to shroud the carnage.

Thus ended our Battle at the Komsomolets State Farm on the road to Kursk.

My impressions of the rules and game:
I really enjoyed the flow of the game. These rules played faster as we got our head round the mechanisms and, with the chit draws, give a lot of the "unexpected" that many "IgoUgo" games seem to lack. As signed up members of the Too Fat Lardies IABSM club, the unexpected has now become the expected, and so these rules ticked a box. There is an element of the old school systems of recording ammo amounts for individual vehicles and ticking off usage that is slightly cumbersome, but I stress slightly. This is counterbalanced by the author including the use of replenishment vehicles and rear area support units such as medical teams and wire laying groups that can add "spice" to any scenario.

I suppose my only quibble having sat back and thought about these rules is the orbats themselves. The use of   three tank platoons particularly for the Germans and 5 man sections with one light machine gun nags at my historical simulation gene. I understand these are mechanics to make the game system playable, particularly with the German machine guns. Apparently two of these weapons in a section are not workable in the rules.

Would these be my turn to set of WWII rules? Definitely not. I'm afraid IABSM still hold that position.
Would I happiliy play this game system again? Definitely Yes. The rules give a fun game that seems to capture that movie element to WWII and I will get a copy of my own to play. I think for the Russian front these rules have some distinct advantages particularly when there are numorous units on the table.

I will certainly be awaiting the launch of the Normandy module (which is more my own personal interest area) with great interest.

Great game, good fun. Thanks to Andy, Jason Nathan and Gus for a fun day