At the Devon Wargames Group we pride ourselves in always trying to run at least two games a month to cater for all tastes.

In addition to the game I ran, Steve H set up a 15mm ACW game using the Peter Pig Rules "Civil War Battles. I have played these rules before and though not involved in yesterdays battle, know that they are a fun set to play.

During a lull in the fighting in the Indian Ocean I was able to wander over and admire some lovely models "Strutting their stuff in Dixie" and took a few shots of the game.
﻿ 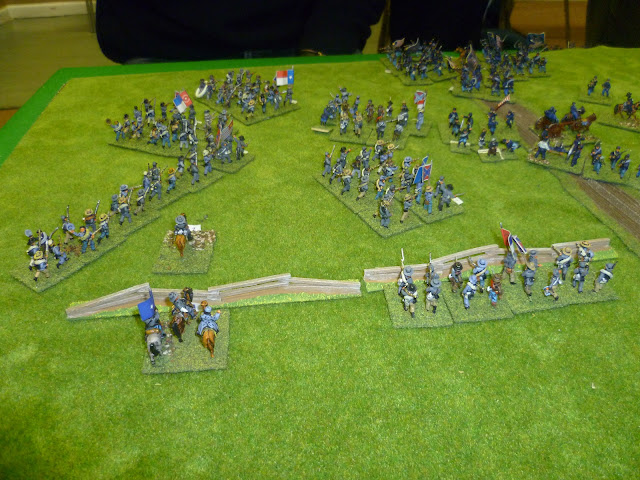 Every wargamer has a story about bad dice, well here’s another one.
In Peter Pigs “Civil War Battles” both sides during the set up allocate 60 War Point dice to decide the attacker and assorted small perks spread over a further 9 topics , all you have to do is throw 5 or 6 , deduct the two totals and look up the effect . The Union chose to have 18 attacker dice and achieved a magnificent two 5/6’s , the Confederate player had allocated the minimum 10 dice as he wanted to defend  and then managed to get eight 5/6’s . But the Union wasn’t going to stop there, in CWB the defender now has to throw for each unit and either remove bases or move off board as reinforcements or both, the severity of the dice rolls depend on how much he lost the dice roll (6 is really, really bad) however each gun only has to roll once and if it is a 5 then it becomes a reinforcement, a 6 and its gone for good. Somehow out of 8 rolls he managed to get 6 sixes.
So it looked a bit grim for the union, a third of its forces gone walkies plus most of its guns, the thin blue line looked desperately thin as the vast hordes of Confederates made their first move.

There was one thing in their favour, if they could hang onto the rear objectives until the game ended in around 6-8 turns then they might just grab enough victory points to win. Because the had lost the roll off by the worst possible score then they already had a guaranteed 12 D6 VP rolls, prevent the Confederates getting 9 VP rolls for the rear objective and they might just do it.

The Rebs throw everything they could down the left hand side , 7 units would surely sweep away 2 flimsy weakened Union Brigades and despite them heroically standing for long after the time when I would have been halfway to Washington it looked  all over once they crumbled before the Reb Bayonets . (In CWB the “Falter Test” is taken prior to combat, generally the attacker starts with a score of 3-5 and the defender 2-3, add 2D6 and if the attacker wins he gets in. If he wins by +5 then the defenders rout off table. The Union Right wing commander in line with team orders throw double 1). However reserves were coming on from all sides plus the centre units swung across to somehow stem the tide. In what looked like a scene from Zulu the Union forces stood back to back as the Rebs tried in vain to force their way through to the Road entrance objective.

Meanwhile the centre of the Union was down to 1 Raw brigade against 6 so you don’t need me to tell you what happened and it was actually this sector which would see the  not unexpected Union Collapse however with poor terrain and poor command rolls the victory advance became a victory crawl .( each brigade must pass its roll to move, add the generals rating 0-3 to the units rating 1-3 plus 1 point for every 3”from the general and 1 for terrain /units ; throwing under this total or a natural 2 or 3 is a fail and everyone only gets 1 Action Point ) .

The left wing for the Union side was however a rousing success and didn’t lose an inch of ground , good dice rolls for base removal at the start had left them with almost full sized brigades and they managed to throw back the Rebel attack which was not helped by their best units being left behind by yet more bad command rolls . This only got worse as each turn they got further and further back as their attacking comrades raced forwards , do you stop your the attack and wait or do you push on and hope for the best. This time it didn’t work and the Union Forces held their ground along with the important side road objective.
It was about now I realised the pub was open so called a halt to the game and started to add up the VP ‘s  , the cunning Union game plan suddenly kicked into life and a torrent of high rolls on the VP dice saw a change in Confederate expressions from smirking to worried . By the time the swarm of Blue coated bases in the dead pile were added in however the final score was +10, a Small Confederate Victory.

CWB is a defender biased game if you play with the “War Points” and set VP scoring and given average dice rolls for base removal you are not going to force your way throw the defence in 6-8 turns. I must have played this game 20 times mainly as the attacker and despite being at least in my own mind a brilliant wargamer I doubt that I have won more than 2-3 times. Make your own scenarios and victory conditions if you don’t like it, but those War points, their so damn addictive.