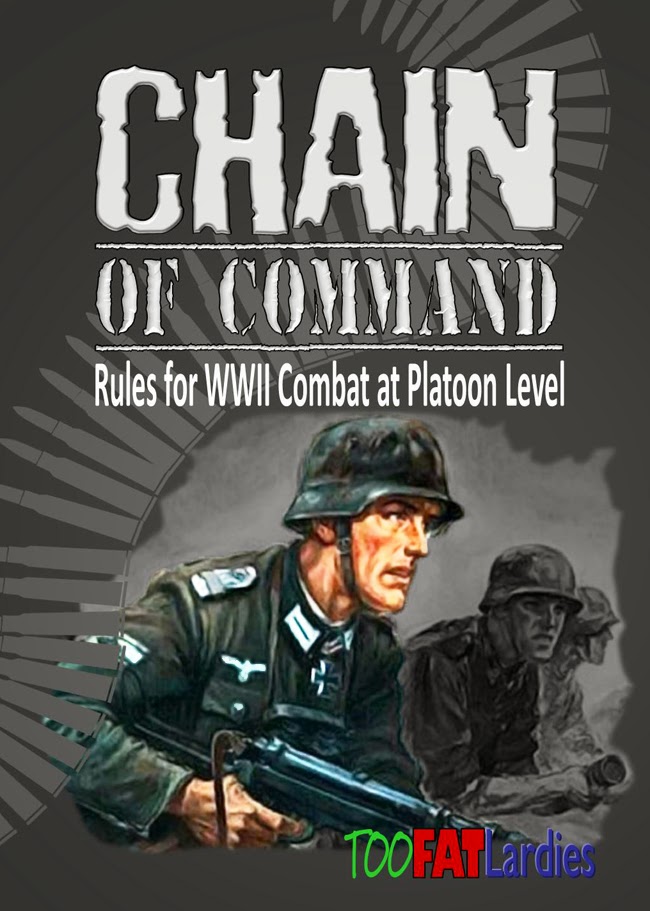 First club meeting in 2014 saw us getting started with two games of Chain of Command staged by Jason and Nathan, who were very much involved in the play testing and development of these rules. For the rest of us, this was our first go at them and we were at the bottom of the learning curve, all be it , that we had all seen the marvellous video demonstrations staged by the Lardies on their You Tube presentations.

So the game I played was set on the Eastern Front 1941 with a German Infantry platoon vs a Soviet Rifle equivalent. Our German platoon was beefed up with an extra Rifle section and an MMG section, but no specific anti-armour capability. The Russians had a couple of T26 tanks and Flamethrower team.

So our first game had a meeting engagement with both sides patrolling forward towards a small village. When the markers were finally locked the German Jump Off Positions allowed them to occupy most of the village with the Soviets in the hills and woodland beyond.

The German force had first phase and decided to deploy two rifle sections into the village with a MMG team on their left flank at the crossroads. The Soviets deployed two rifle sections, one on each flank and a T26 tank on their right, German left flank. This caused a certain amount of consternation in German ranks with nothing better to take on a tank than grenades and determination. Oh well it's early East Front, how sad never mind.

The Soviet forces on the German left were ensconced on a small wooded hill and proceeded to open up a barrage of small arms fire into the village aimed at neutralising the MMG team, killing one and causing a shock. The MMG team fired back killing two Soviets. Then the T26 edged onto the road looking right along the German position in the village.

With their flank turned the German infantry were forced to clear the road, and start to move troops out to the left to deal with the threat posed, but having to keep troops available to watch the other Soviet force on their right. More small arms fire was directed towards the MMG team and they were dead.

The German response to the T26 on their flank was to use their "Handgranaten" characteristics and launch a close assault from a wheat field close by, under cover from smoke from their 50mm mortar. The attack wounded the commander and shocked the vehicle into shut down for a turn as they tried to recover their composure. With the threat of the MMG disposed of the Soviets brought up a second Rifle section  on to the hill and started to lay down a fusillade of fire onto the next German section in the village causing a few casualties but more shock.

Meanwhile on the other flank the Soviets advanced their rifles to the edge of the village taking care to keep out of sight as a threat in being, and bringing on a second T26 which advanced down the road towards the crossroads.
Next phase saw the German commander try to finish off the first Soviet Tank but only succeeded to cause more shock and kill the gunner. Meanwhile more German infantry were killed by Soviet small arms fire, although the German return fire killed the section leader and half his squad on the hill top. In the Soviet phase the pressure continued with a maxim MMG being brought up on the hill to add further fire support and a surprise attack from a Soviet flamethrower team from the opposite wheat field to where their tank was being attacked.
The flamethrower killed a couple of German troops, wounded the Junior leader, and caused two more shocks before being wiped out in a hail of return fire.

With all the incoming small arms the German force was becoming pinned down and unable to remove shocks, which with the drip drip of mounting casualties was starting to impact on unit and force morale.

The pressure finally took its inevitable toll and with two German sections collapsing under the fire the platoon fell back from the village a broken force.

Thanks to Nathan for hosting our game and to Chas, Vince and Ian for a very entertaining afternoon.

Chain of Command really lived up to expectations for me. I really liked the way they model this scale of action and the use of kills and shock to model casualties and morale as a joint result of combat. The ground scale works well for 20/28mm and is perfect for use with 15mm which is a big plus for me. When time permits, I will put together specific sets of figures to run my own games. If you haven't tried these rules yet but are thinking of doing so, give then a go, they really are very good.

Meanwhile on the Western Front.
I didn't play in the Normandy game, but gather the Yanks got beat. So here are a few pictures of Jason's collection of figures and terrain, which I think you'll agree look splendid.