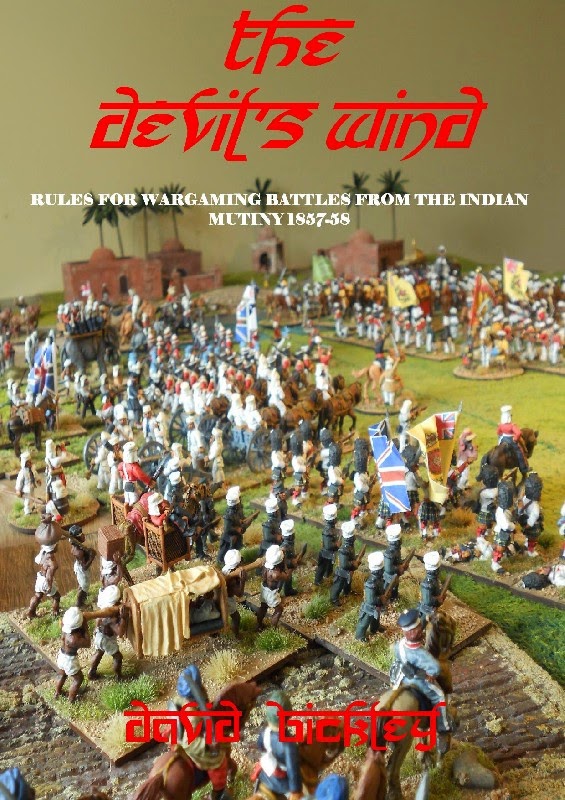 Scale : 28mm
Rules: The Devils Wind, Rules for Wargaming Battles from the Indian Mutiny
Game organiser and Figures: Chas and probably someone else, I wasn't really paying attention.

One of the games at the October meeting was a 28mm Indian Mutiny run out using “The Devils Wind” rules; I was keen to try this set as part of my on-going search for something I can use to re-fight the Anglo-Sikh wars in 15mm.

As it was the first time most of us had used these rules two battles were arranged , first there would be a smaller skirmish style game with limited forces so that people could get to grips with movement, firing, casualties and morale etc. The longer the Mutineers could hold back the British then the more time would be earned to allow the main force to erect defences for the second game later. 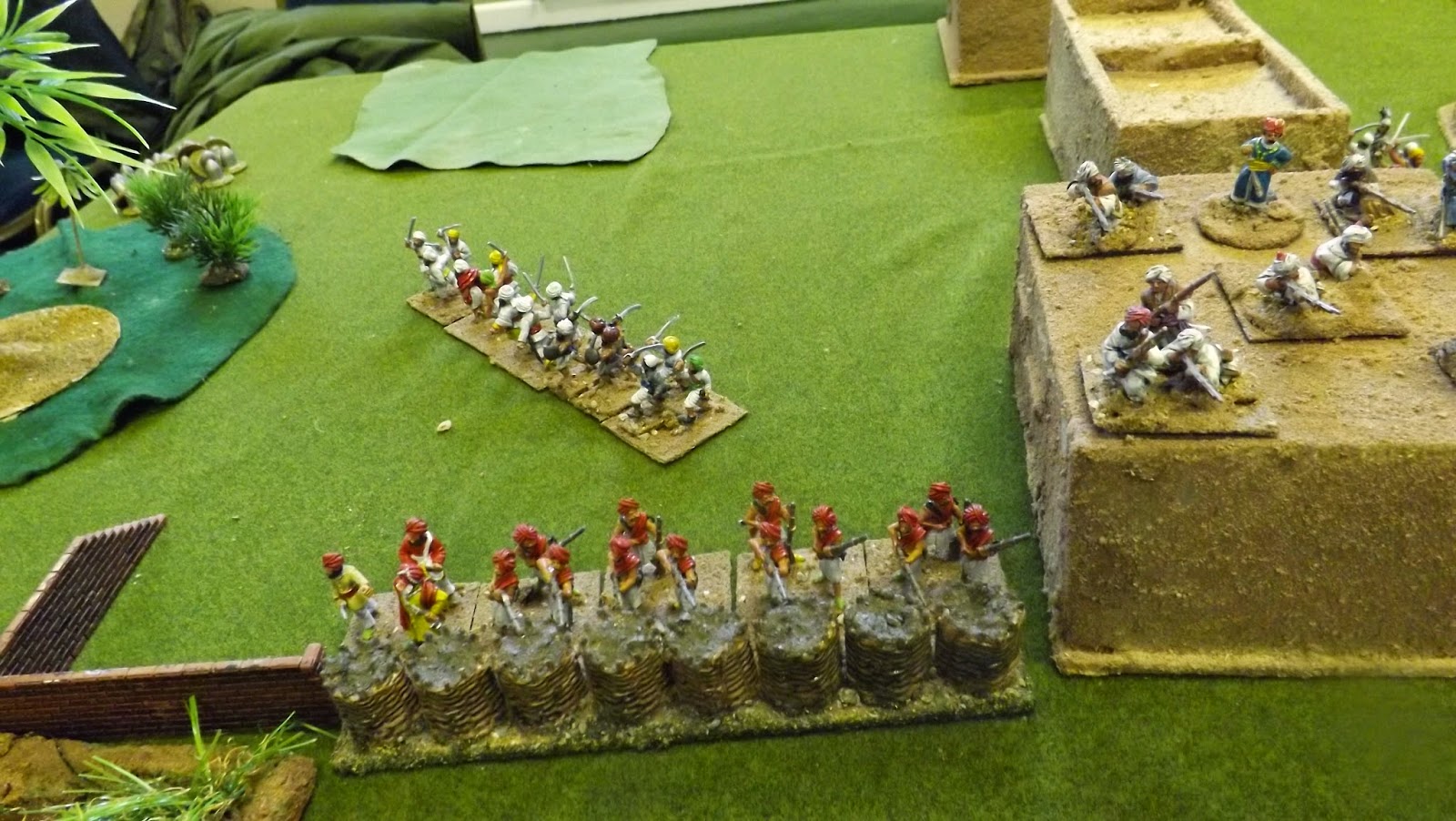 Frankly not much happened in the first game and as we quickly mastered the necessary rules we moved on to the bigger bash. 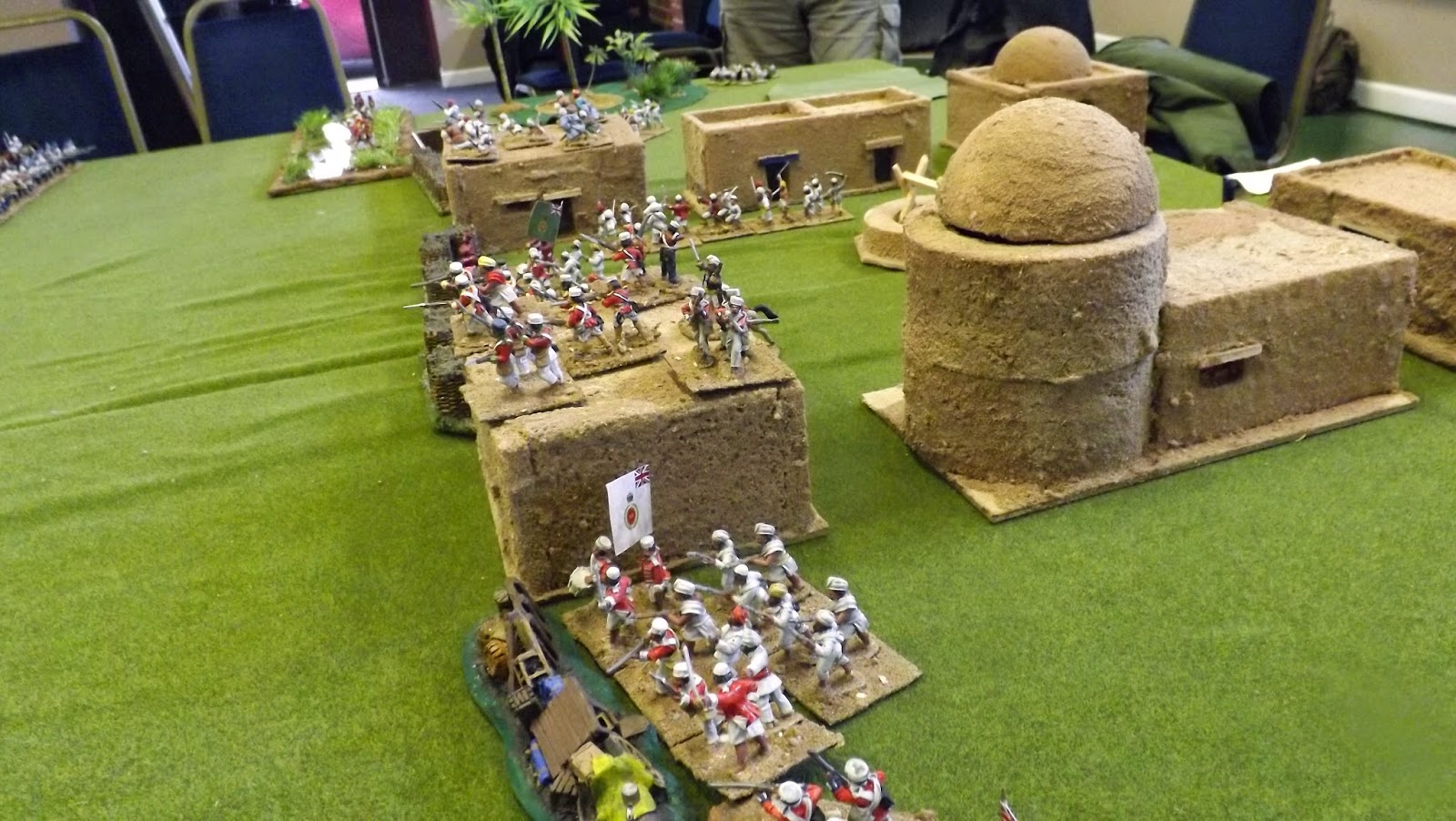 In the main game the Mutineers (sorry, that should read Heroic Defenders of Liberty) occupied a small village and barricaded the hell out of it , we also had two guns which we sited in the centre of the board and some cavalry that did what all cavalry do and that’s look pretty and do nothing.

Faced with the daunting prospect of attacking a heavily defended village the Imperialist oppressors and their lackeys (sorry, that should read the British forces) moved onto the table, Their Sepoy’s were massed on our left flank, the centre although only thinly held was very artistically made up of units in lovely pastel shades and then on our right were their British regulars and other European’s forces.

The Sepoy’s moved into close range and proceeded to shoot it out with the defenders and not surprising lost out despite their numbers. (The Sepoys had the same ratings for both H2H and firing as the mutineers but had lower morale) I would like to say it was mainly through my skill that I flung back this attack but it was probably because I was getting a 50/50 saving throw for being in cover and they didn't. The fact they stood for so long at all was only through the assistance of a couple of “Heroic Chaps” who were tagging along, “just to help out, don’t you know, what, Pip Pip “.

The serene centre units so beautifully coordinated were now adding large dash’s of red to their ensemble through the judicious application of large cannon balls helpfully supplied by the Mutineers artillery, the peaceful and calming effect of their uniform choice didn't appear to be working but fortunately they did have a lot of “Pluck” (its what the rules call morale) so they held on.

More successful was the British left , made up of their European units they advanced onto the flanks slowly pushing back the Mutineers , their application of Peace through Superior Firepower was proving effective but at a cost. Shooting works like this: throw to hit, then convert to a kill, and then a saving throw if any.  They may have been better shots then us but troops in the open don’t get a saving roll. 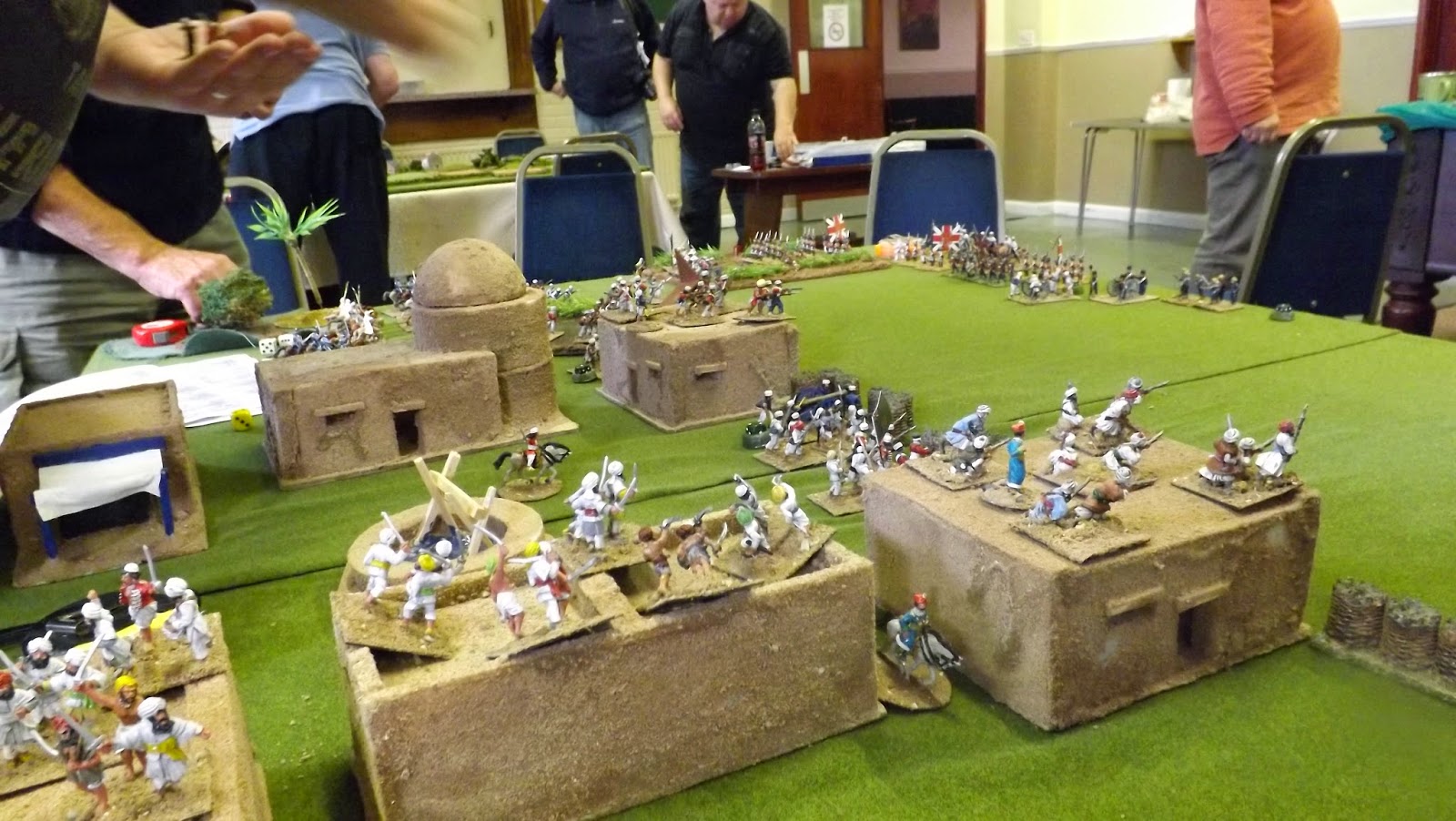 After two hours the game was over, the Sepoys were falling back, unable to shoot away their enemy and there was no point in trying, instead, to go in with the bayonet, the centre was holding but now having to stand a lot further apart to occupy the same ground, the British left was closing on the village but very thinned out and it looked unlikely they would be able to force out the indigenous population. 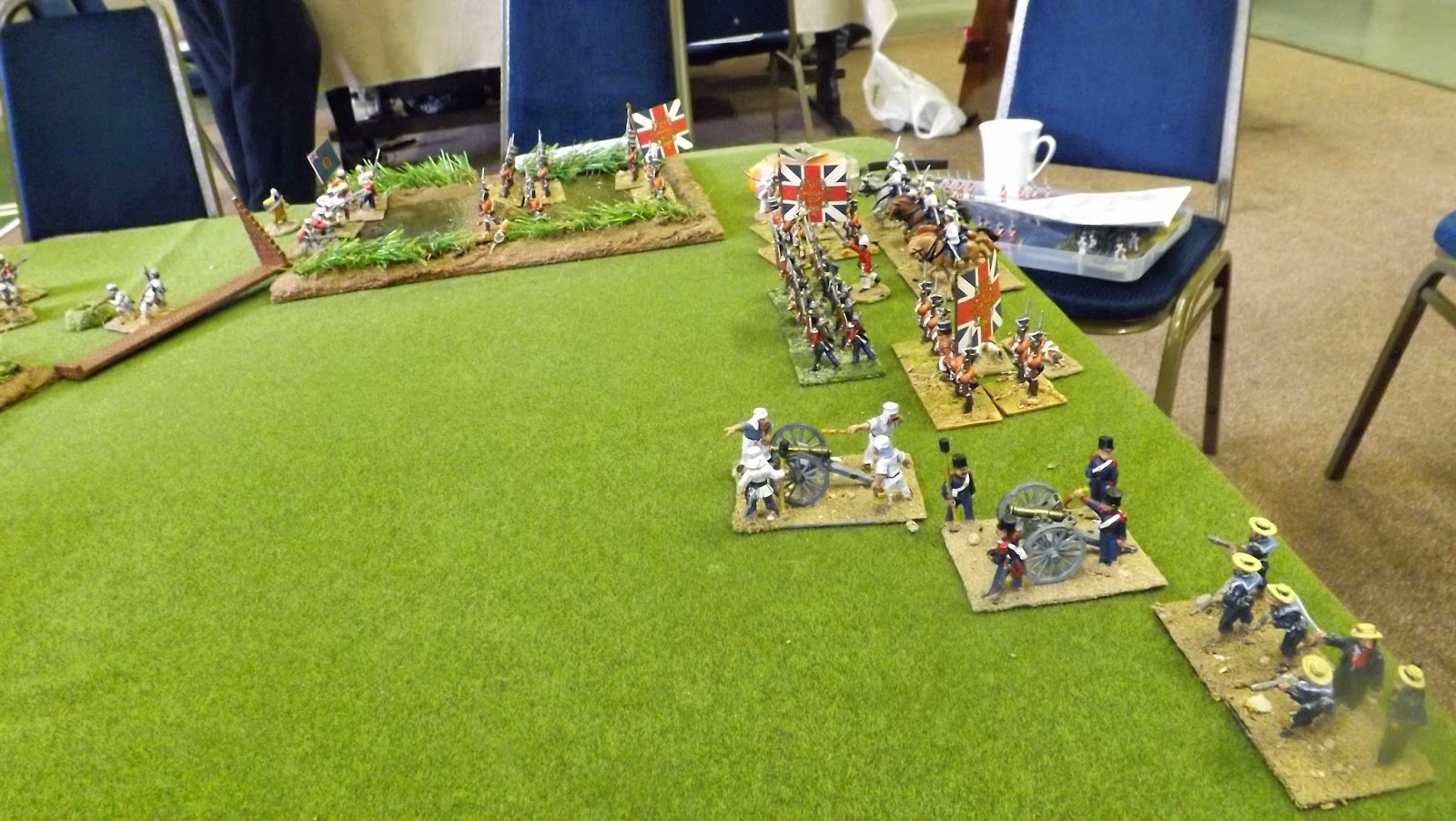 We all agreed that the best option for the British would have been to have sat just outside musket range and shot us to bits with their rifles therefore forcing us to come out and advance on them, whereupon we would have been mowed down. 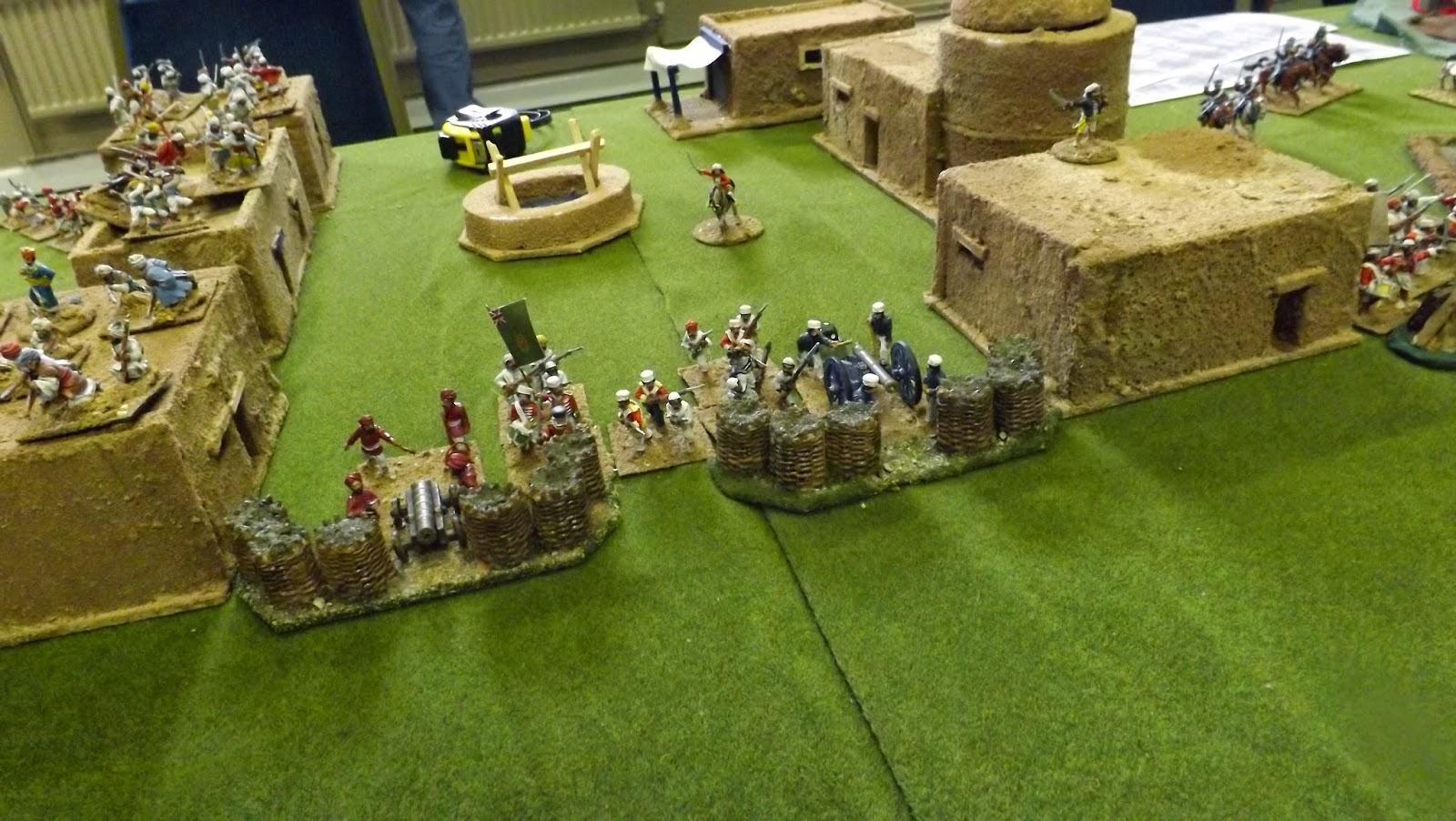 These rules are ideal for an evening’s game when you only have 2-3 hours available and not really suited for a club afternoon with plenty of time despite the large forces we had on the table.

So after we had packed up we had to decide what to do next as it was still only mid afternoon, we could either watch our colleagues play their games, go home and help the wife with the shopping or go to the pub.  Pint please!

My search for a decent set of Anglo-Sikh rules goes on.
Posted by carojon at 17:13