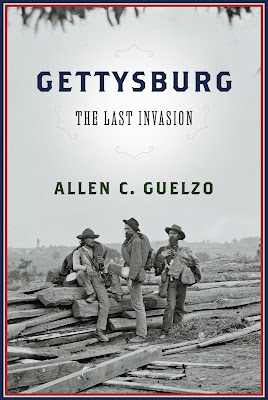 I have started reading the so far excellent book “ Gettysburg – The Last Invasion “ by Allen C. Guelzo and have reached page 45 ( finger burn on your pointing finger does slow you up) . There are a number of points he has raised in his pre-amble that have interested me, the main one of which is at the end of this comment.

Firstly the discontent prevalent among both sides;  for example the Southern command viewed the Georgian and North Carolina troops suspiciously as being very lukewarm towards the cause and more prone to desert than other states forces. On the Union Side he outlines how the steep division between the Corps commanders worsened once McClellan was relieved of command by , already badly split along party lines there was now the pro and anti ‘McClellan’ commanders. The author suggests that Lincoln deliberately chose the most ‘anti-McClellan ‘ general  in the army , Hooker , to replace Burnside ( pro-McClellan) to try and get some control back over the army .

More interesting was his mention of the effectiveness of early volunteers.

“One regiment lined up to target shoot at a barrel 180 yards away, only 4 shots out of 160 tries hit it. In the 5th Connecticut forty men firing at a barn 15 ft high from only 100 yards managed to score a mere 4 hits and only 1 was the height of a man.”
And
“Even among the regulars of the 12th US the troops knew very little about principles and practice of firing, ours was very bad, the rear ranks sometimes firing into and killing the front ones.
. William Izlar, 1st SC remembered a fierce exchange ( 1st Bull Run) of volleys at a distance of no more than 100 yards in which the chief casualties were the pine cones from the extreme top of the trees. I guess that only 1 round in 500 ever hit anyone “

Getting to my main point; I am sure that we have all seen some of the Waterloo re-enactment that took place recently and were surprise by not only the volume of smoke which was generated by even a small amount of people but the fact that it hung around spoiling everyone’s pictures , 50 years later smoke was still a problem.

“Soldiers on the firing line quickly found the smoke from their rifles hanging about them in clouds and it was not uncommon for officers to have to get down on all fours to peer under the smoke bank to confirm enemy troop positions.”

And here it is:

“At , artillery gun crews ran laps around their guns waving their arms in an effort to dispel the powder smoke from the guns discharge.”

Top marks to any manufacturer who brings out models representing this.

Lets hope the next 427 pages are just as interesting
Posted by carojon at 08:48