Battle of Paraitakene 317BC refight. Part One: Planning 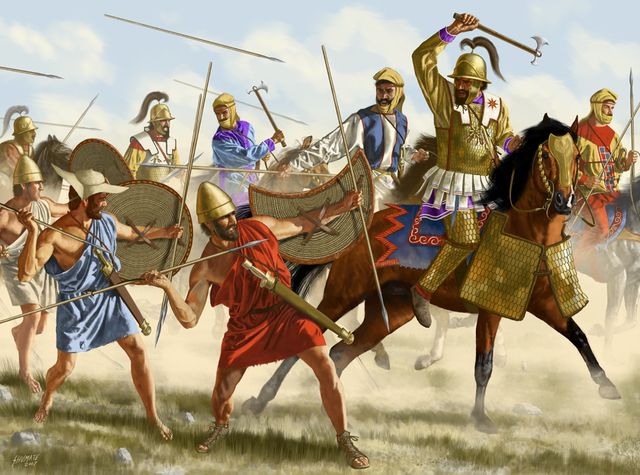 I was asked to organize one of the games to be played at the August club meeting and the request was for it to be an Ancients game using Hail Caesar and if possible for it to be between two Seleucid type armies. Fortunately I have a couple of suitable armies that could go some way towards this and with the addition of Steve Huntsman’s collection as well then I reckoned that between us it was doable.

I thought that rather than just doing the usual equal point’s battle which would look very "samey" with two identical forces, I would try instead to find an actual battle which we could refight. So the first thing I did when I got back home was to call up Wikipedia and go though all the Successor battles and try and find something suitable. I decided on the Battle of Paraitakene between Eumenes and Antigonos in 317BC because it was one I hadn't previously played, also the two sides were relatively even and there was a reasonable amount of information regarding the forces involved.

Obviously the next step was to then search the web for someone else’s re-fight of this battle, rip off their work and then organize my figures accordingly for our particular game and rule set. Unfortunately I couldn't find a re-fight that showed me anything useful on how to convert this battle onto the tabletop and instead of doing the normal thing of giving up immediately and trying to find another battle that did have the forces broken down for wargaming , I thought that I would actually try and work it out for myself.

First step then was to tie down a source for the numbers involved, fortunately I have a reasonable library built up over the years of suitable books for this period and combined with another trawl through the Net I ended up with two sources that had good enough details to allow me to have the confidence that I had the forces involved reasonably right rather than just copy off whatever was on the Wiki page.

I used the excellent book by Richard A. Billows “ Antigonus the One-Eyed”
Antigonos the One Eyed

from my collection and combined it with some on-line pages from Lost Battles: Reconstructing the Great Clashes of the Ancient World  by Philip Sabin.
Lost Battles


These then had to be split down into their relevant troop types which using the above sources came out as:

Next was to convert everything into wargame figures and into also HC units. After several beers I decided that the best way to do this was to work with ratios/percentages and as long as I kept them as close to the actual battle then I could work around units straight away rather than the normal one man = 500 etc. method . This would then allow me to draw up two armies out of the units.
It’s probably easier if I show you.

In the actual battle the percentage ratio in heavy infantry was 38:62 in Antigonus favour so for the game I had 15 units of HI, 6 v 9 which works out as 40:60 , close enough.
The rest worked out as:

At the same time I did still have to come up with some rough split of troops–to-units ratio and rather than impress you with my genius I have to admit I just guessed on what looked about right and fitted them into the game and rules.

HI were therefore 3000 men per unit
Cavalry were 1000 per unit
Light Infantry were 2000 per unit.
Skirmishers as small units 500 per

Don’t go looking for any rationality behind these figures as there isn't one.

I still had additional unused information from the above mentioned two sources on the actual make up of both armies so I allocated them all as best I could into the various sub groups and then with a bit of subtle rounding up/down to the nearest figure plus combining a few similar units together, it all worked out very nicely in the end.
The one thing I didn't do was work out the ratio between all the various types to each other but that’s frankly taking thinks too far plus my curry was getting cold.

After that it was a matter of getting out the HC Army lists and making up two armies from the Alexander’s Successors List to match my deductions . I don’t plan at the moment to include the HC armies but they are available if requested however as there isn't going to be much I can write for the re-fight that puts me in a good light then I might find myself with a bit of unexpected space in part two that needs filling .

Terrain was easy in that it was fought on a plain and had some hills on two sides that didn't come into play.

Next up: part two, which will cover the re-fight, how I lost and the creation of a new club phrase.

This has been a Mr Steve presentation.
Posted by carojon at 18:59