Perhaps one of the most iconic scenes that epitomises the closing of the Falaise pocket and the closing stages of the allied campaign in Normandy is the pictures of the end of the battle to take St Lambert sur Dives which saw the awarding of the Victoria Cross to Major David Currie.

The map below illustrates the significance of the little hamlet of St Lambert and it's taking by Canadian troops as being pivotal in preventing remaining German troops from retreating back over the River Seine and the Belgian border beyond. 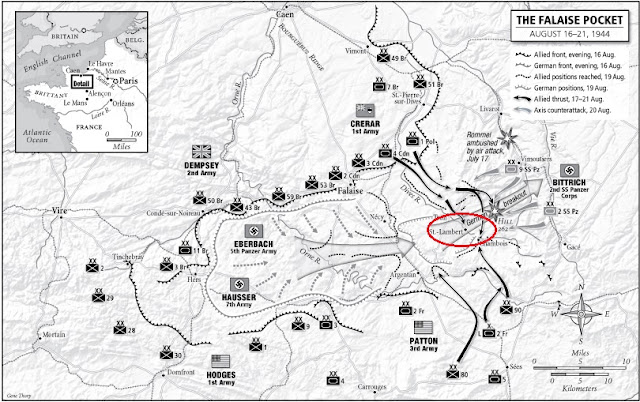 The club is having a bit of a resurgence in playing "I Aint Been Shot Mum" just recently following a lot of games of its stable mate "Chain of Command" and for this game Ian pulled together his collection of figures and terrain to play the scenario "Canadian VC" that models the battle to take St Lambert and is featured in the main rule book.

Too Fat Lardies - I aint been shot mum


The village of St Lambert is described as a typical Normandy village with sturdy stone built buildings surrounded by open orchards and light hedgerows atop a slight rise overlooking a stream in the valley below it.


The village was held by a "hotch potch" of German troops scraped together for the sole purpose of holding the route open for as long as possible. 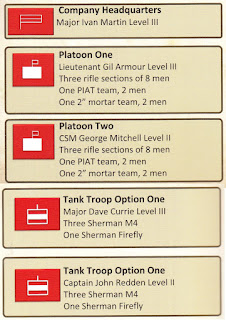 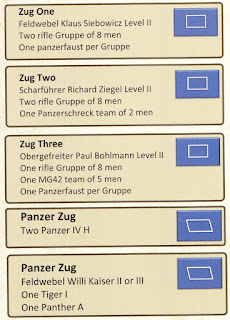 Conversely the Canadian force is rated as Veteran and the motivation that rating brings would see the Canadian troops able to take the fight direct to the German defenders and very quickly gain the ascendancy.

So with the table set up and the forces deployed on blinds, we were ready to start. The Canadian troops would advance onto the table on and around the road leading over the three arch bridge.

There objective was to break the German force holding the village and take the crossroads at its rear, without being a broken force at game end.

With the objective in mind the Canadians advanced with a troop of Shermans under Currie (Blind 5) and an infantry platoon under CSM Mitchell (Blind 4) with the armour looking to cross the bridge and gain the dead ground under the ridge, whilst 'brassing up' the forward buildings to cover the approach of their supporting infantry.

Behind the lead units, the second troop of Canadian tanks (Blind 6) would move through the orchard on the Canadian bank to cover Currie's troop, whilst the 1st infantry platoon under Lt. Gill (Blind 2) would quickly follow over the bridge and make for the centre of the village on the right of Mitchell's platoon.

Currie's troop were the first to bump the enemy, with their rapid advance over the stream, shooting up the first building and shocking the hidden German infantry on their passing; their progress was stopped by a fierce little duel with two Panzer IV's, that saw the German tanks get the better of it.

Currie quickly brought the other three Sherman Vs in his troop up to the ridge and their combined fire took out the two Panzers.

Meanwhile Mitchell's infantry, making best use of their veteran four action capabilities, poured on mass small arms fire at the first house on the road and then placed 2" mortar smoke in preparation for their assault on the badly shocked and pinned German infantry.

The Canadian infantry attack was irresistible when it hit, sweeping through the first building and wiping out the defenders. CSM Mitchell then formed his platoon into a fire base to shoot up the next German zug that left the cover of the nearby buildings to line the wall of the church yard in a desperate attempt to stall the attack.

The second German zug fell the way of their comrades, coming under fire from Mitchell's platoon and Lt Gill's platoon, before Gill lead his men forward with grenades and bayonets to clear the wall.

The German defences were reeling under the assault and threw in their remaining assets to stop the rot.

The Tiger/Panther zug rumbled out into the fields on the German right to take up the fight with Currie's troop, quickly disabling one of the remaining Shermans and forcing the other two to retire to hull down on the slope, taking pot shots at the big cats frontal armour.

Meantime Lt Gill's platoon came under punishing machine gun and small arms fire from the three storey house on the crossroads, causing the first Canadian infantry casualties in the fight so far.

Hunkering down on the wall to their front, Gill's men returned the fire as best they could and were amazed to see huge chunks of masonry fall from the building as the first shells from Captain Redden's tank troop smacked into it as the Sherman tanks drew up behind their infantry.

Our gaming day was coming to a close and the bar beckoned when we assessed the end of our game.

The German defence was clearly unhinged with three of the five zugs written off and their remaining infantry zug under withering fire from Canadian tanks and infantry and little hope of relief from their remaining tanks who were pinned holding off Currie's troop.

The German ability to manoeuvre was now compromised as the loss of 60% of their forces had reduced the number of their force cards in the deck very much in favour of the Canadians who were now more likely to get the drop on their opposite numbers and so we called it a Canadian win.


The map below illustrated the Canadian attack and three separate actions that turned the battle leaving the Germans with a battered infantry zug at blue 5 and their two tanks at blue 4. 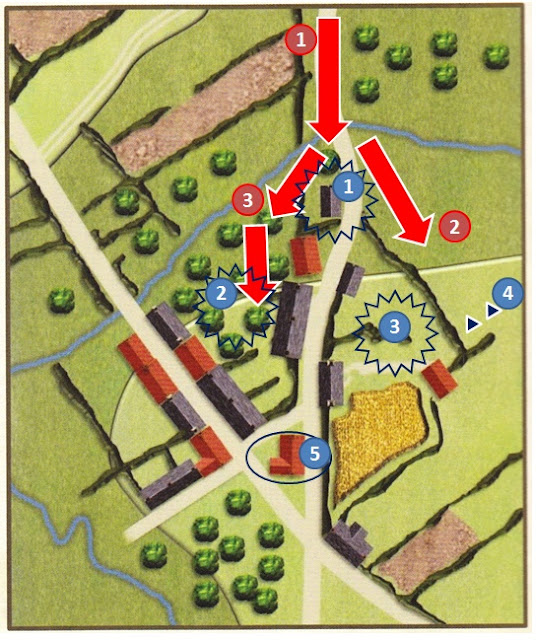 This scenario is a great historical battle to re-fight with good mix of troop types on the table and with Canadian infantry carrying their 2" mortars allowing us the chance to practise the rules using them.

IABSM produced a fast moving unpredictable feast as usual and allowed us to do a bit of tag-wargaming as I was able to hand over command of the Canadians for the first part of the attack to prospective new member Simon, who joined us early in the day, whilst I went off to photograph and record events in the other games being played.


Thanks to Ian for pulling the game together and for Steve and Simon in making another pleasant day of gaming at the DWG.