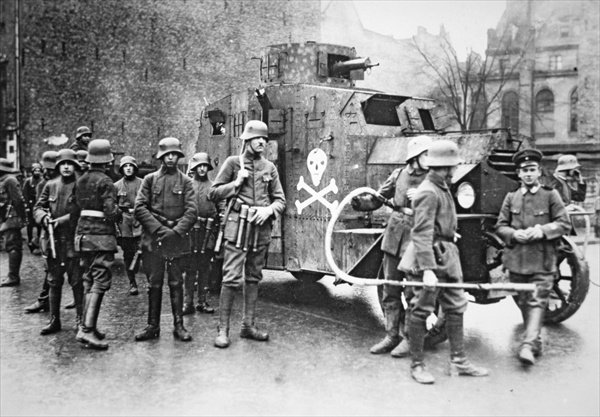 Now you don't see a game from this rather unique period in history being played that often, but Chas can always be relied upon to broaden our historical wargaming diet with interesting games supported by interesting rules, not to mention the figures to recreate the theme.

I have to say I have never come across "Triumph & Tragedy" until this month so if like me these are news to you and you would like to know more then follow the link below.

Any questions should be posted here on the blog and I will see if we can't get a reply from our resident expert.

I grabbed some pictures of this month's game and Vince kindly produced a summary of the events. 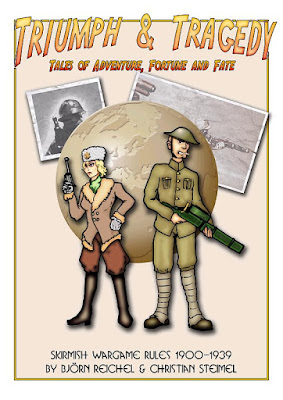 Just a few words to thank Chas for taking Steve H & myself back to the mean streets of the little
Bavarian village of Gerching in 1919. 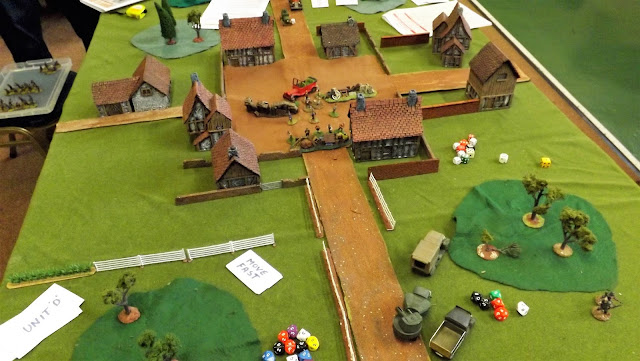 Hurrying to join their comrades in putting down the Spartacist revolt in Munich, a small force of
Freikorp received a request to rescue a well-known Austrian orator & politician, who had been
kidnapped by the rebels. The approaches to Gerching had been blocked with barricades and manned
by militia. Local rumour suggested more reds were approaching from Munich. 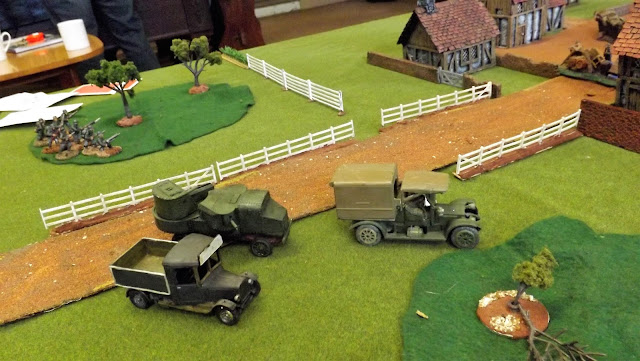 Time being of the essence the Freikorp infantry debussed from their trucks either side of the road in
the adjoining woods, as their Garford-Putilov armoured car brought the barricades under fire from its
75mm gun. The militia commanded by Chas were under pressure and taking casualties, as their
reserves arrived and ex-soldiers in their ranks deployed an HMG to fire on the Freikorp. A fire fight
developed and three Freikorp fell, before the HMG was silenced. 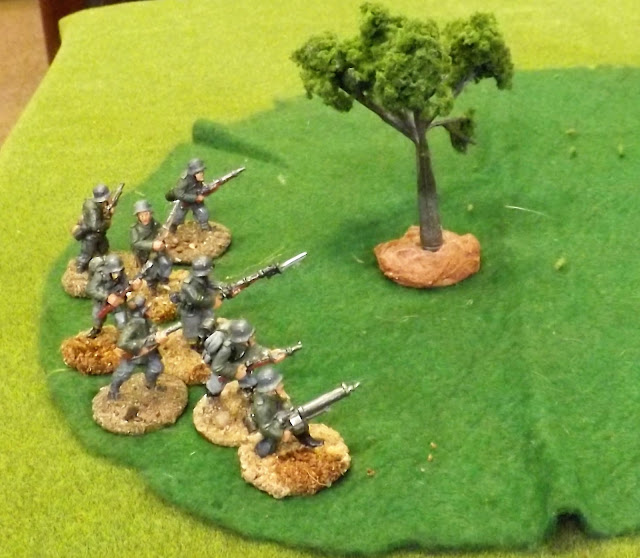 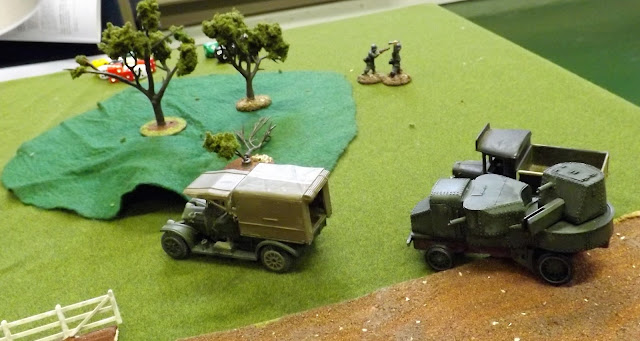 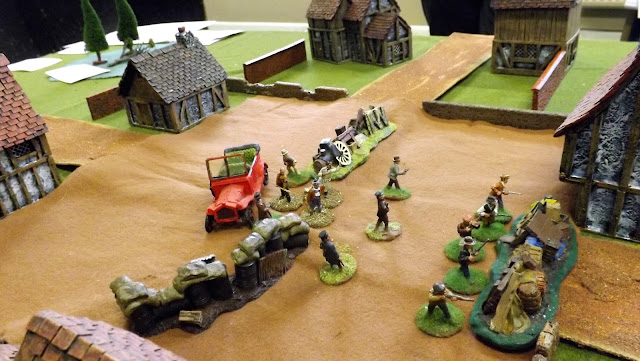 Meanwhile some red sailors under Steve, arrived to bolster the defences and their HMG deployed to
fire on the Freikorp on the other flank. 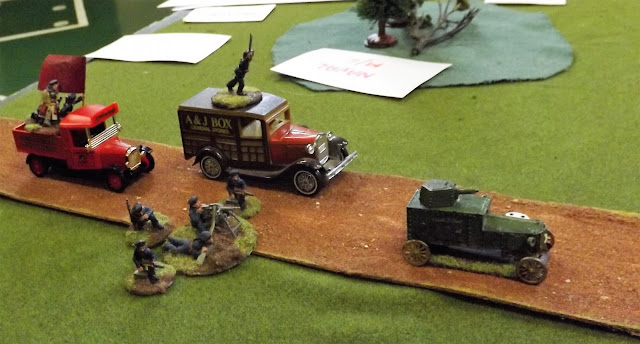 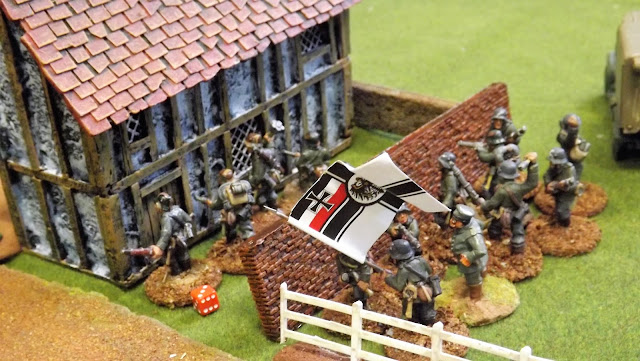 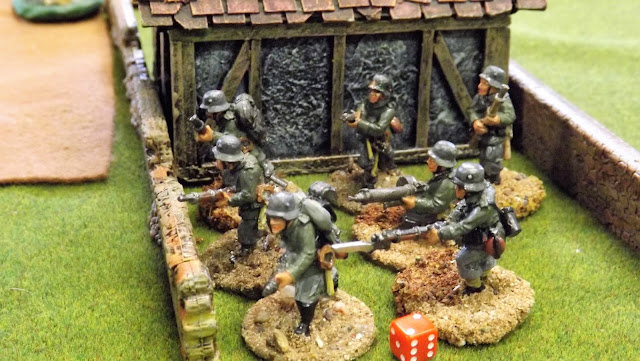 As the militia hustled Herr Hitler away, a 75mm shell caught the rear-guard and scythed them down. 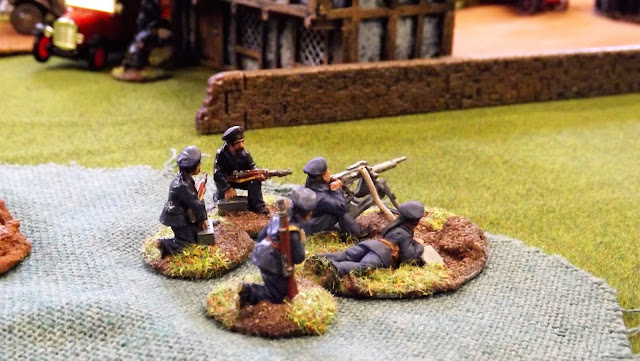 Having cleared the first barricade, the Freikorp moved up to take it, but came under effective fire from the sailors and their supporting Model T improvised armoured car. The Garford-Putilov silenced the sailor's HMG, but the Freikorp on the barricade were forced back, despite their supports moving to take the right flank. 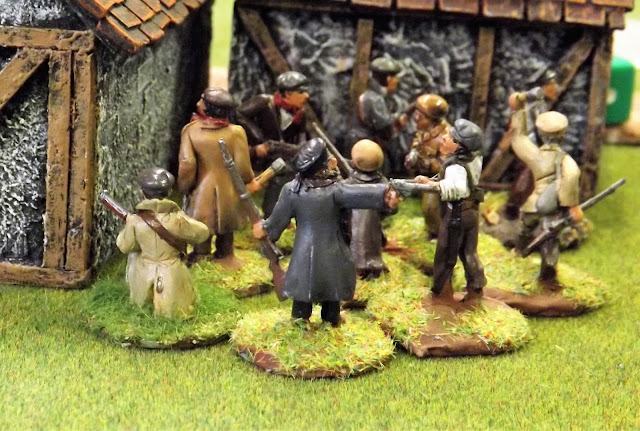 The rebels escorting Adolf away were in the distance by now, so the armoured car made a desperate
attempt to crash the barricade, but it was too little too late. Sight of Hitler's toothbrush moustache was
lost in the fading light. "Ya, a new party, revolutionary, national socialist, well maybe not so nationalist anymore." he was heard to remark.