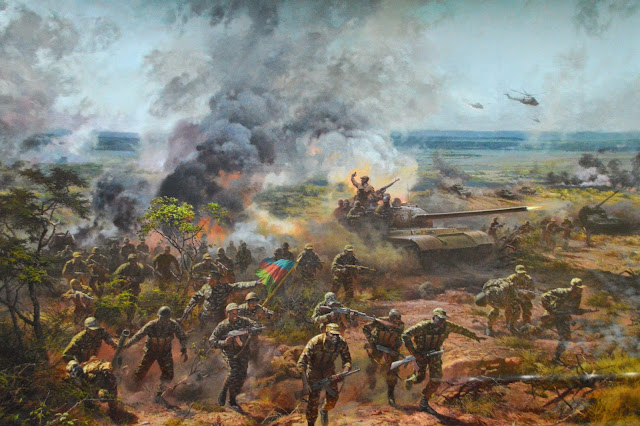 Operation Hooper was an SADF & UNITA attempt to destroy FPLA forces guarding the approaches to Cuito Cuanavale in Angola. On the 13th January 1988 FPLA 59th Brigade pushed UNITA back and occupied their positions. The following morning SADF units counterattacked 59th Brigade, whilst UNITA forces put in diversionary attacks on adjacent sections of the Angolan army line, to prevent them being able to support 59th Brigade. With 59th Brigade forced to withdraw, Cuban tanks and mech infantry pushed up to prevent 59th Brigades destruction, by turning the SADF flank.

We played using my SADF and Chas's FPLA & Cubans in 15mm, to "Cold war Commander" rules.
These are fast play rules, with an emphasis on command and control. Each vehicle or stand of troops
represents a platoon and commanders give orders to platoons or groups. Whether these orders are acted on, is determined by a die roll that must be under or equal to the commanders rating to succeed. 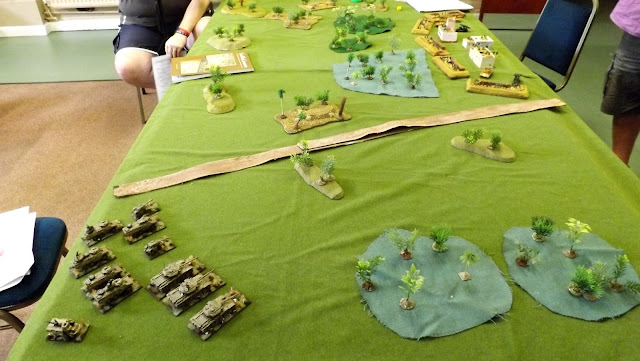 The game opened with my Oliphant tank company (think Centurion 105s) and Ratel 20 battalion
pushing up through the centre, supported by an SP AT company (Eland & Ratel 90s) and a battery of
Ystervark AAA. This provoked an aggressive response from the FPLA, with a T55 company and two
companies of infantry pushing out of their positions and moving towards the SADF making good use
of cover. 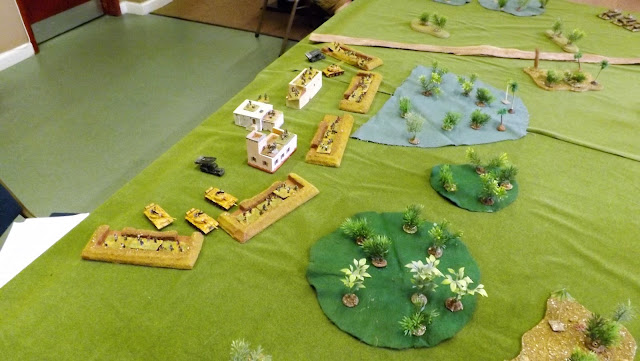 The SADF now had some command and control problems, which led to a halt in their advance and
the SP company failed to act on orders to move and bring the T55s under fire. Grasping the seriousness of the situation, the commander sent the Oliphants to take a position in scrub on a low
rise, to protect the flank of the SADF attack. 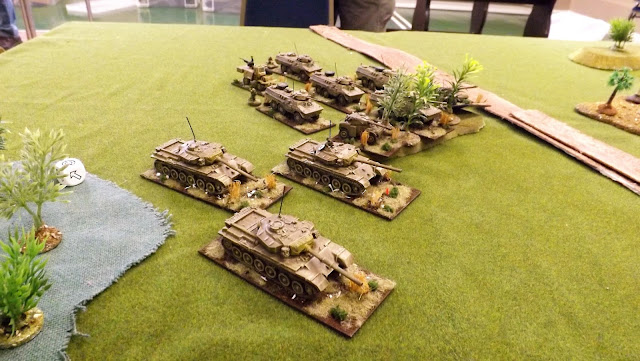 With the Ratels back on the move, the SP AT company brought the FPLA shell scrape trenches under
fire. This drew a vicious response from the BM 21 batteries, with the FAO calling in accurate fire on
the Elands, forcing them to fall back and inflicting casualties.

Not to be out done the SADF FAO called deadly fire down on the FPLA trenches from two batteries of G6 SP artillery. 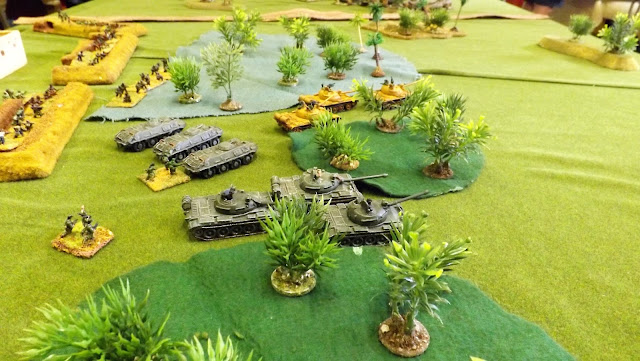 Seeing their allies suffering, a company of Cuban T55s and a battalion of mech infantry tried to flank
the SADF attack. Taking fire from the Oliphants, the Cubans sought to use cover and redirected their
APCs to directly support the FPLA trenches. The Cuban commander sought to order the nearest FPLA unit to follow him. They considered the instruction and shot him dead. 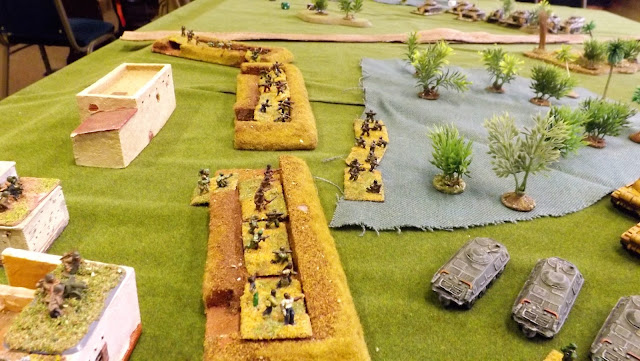 With the FPLA FAO suppressed, the Ratels moved up to cover on a ridge and brought the FPLA under more fire. A mortar company now joined in and things looked bleak for the FPLA, as the supporting Cuban APCs and FPLA tanks were suppressed and taking casualties from the G6 barrage. 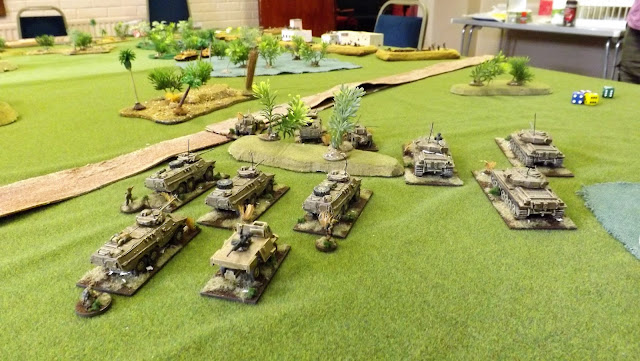 Rallying his suppressed T 55s, the FPLA commander threw caution to the wind and sent them racing
across open ground towards the Ratels, only to cross the Oliphant gun line. The Oliphants were given the order to engage, only to fail to respond and the opportunity was missed. The SADF commander reacted and the FAO called down 155mm fire on the T55s. Bad time for a blunder and a worse one to call fire on your own position. Having suppressed himself, the FAO took cover. 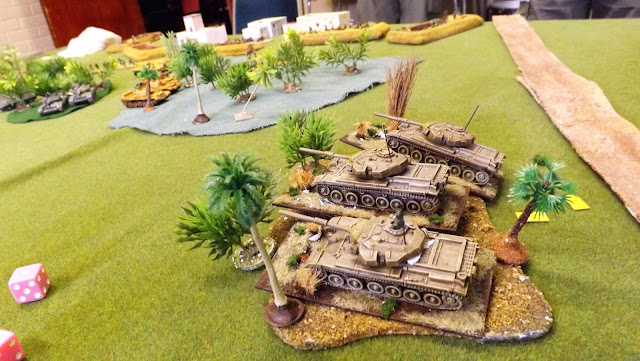 As the T55s fired on the Ratels, the SADF lost a platoon of IFVs. Things looked bad, but Karl Gustav fire from infantry deployed by the Ratels, knocked out a number of tanks and the G6 fire suppressed the rest. 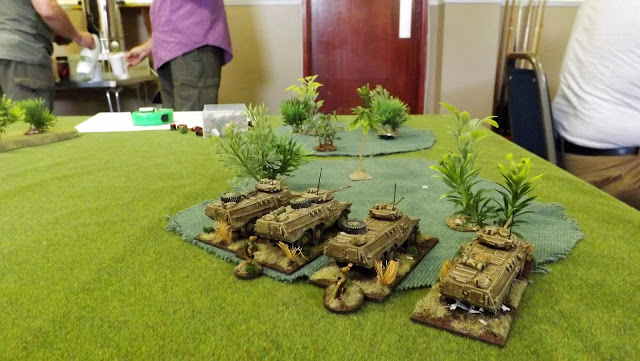 With Cuban T 55s moving up, mounting SADF casualties caused their commander to order the
Oliphants to cover the Brigade's withdrawal. 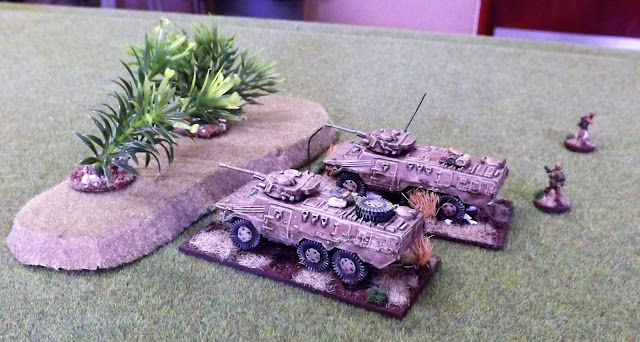 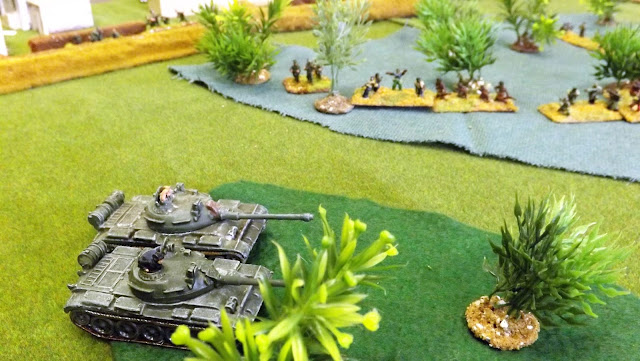 A good game, played in good spirit, with more "blunder rolls" than I have seen in ages. The result
was historical, with the FPLA getting mullered, the Cubans taking casualties, but rising SADF losses
forcing a withdrawal. Naturally both sides claimed victory.