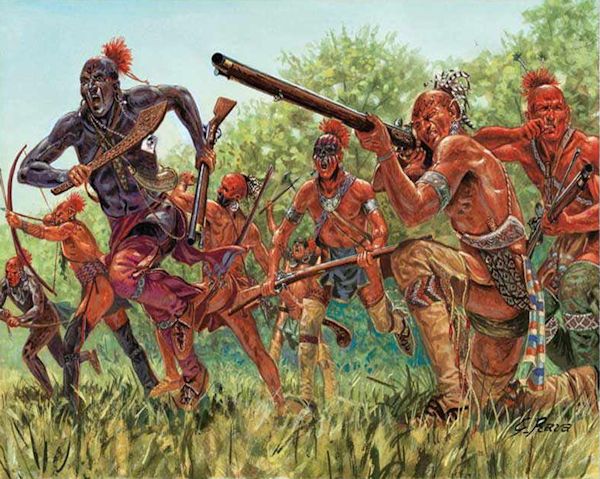 The FIW collection saw another outing this month, using The League of Augsburg’s ‘Donnybrook’
rules.

For skirmishing in the FIW, I currently use three sets of rules; Donnybrook, Muskets & Tomahawks and Sharp Practice (other sets are available!) And for me, this also equates to their level of complexity. 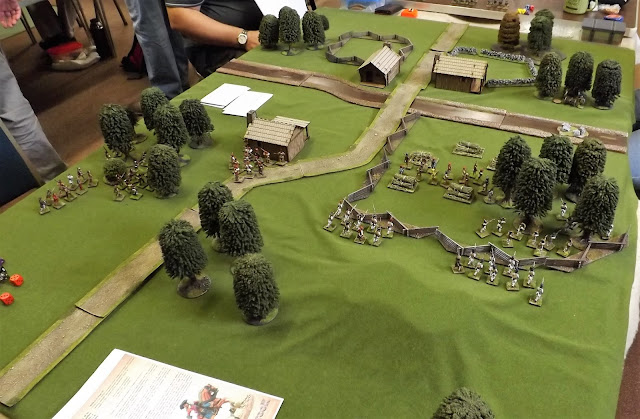 Donnybrook is fast, straightforward and bloody! Very little in the way of saving throws. Its also card
driven, so you will see there is a theme with the other rule sets mentioned.

The game is based on a small force of anywhere between 12-48 figures a side, using a points system,
with the average being 20-30 on a 4 x 4 table. Figures are organised into units of 3-12 figures, based
on your force make up. These are; 12 recruits or 9 mounted recruits, 8 drilled or 6 mounted drilled,
or 4 elites or 3 mounted elites. Regardless of the size of the force, each side also gets a free Hero
level Character. 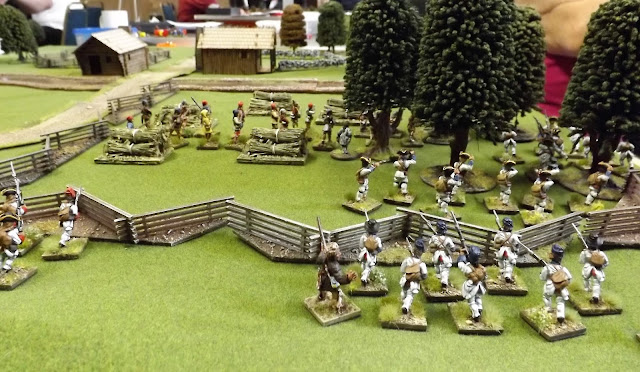 Each turn follows a sequence of Rally (if necessary), Move, Shoot, Close combat. With outcomes
decided by the throw of the appropriate dice; D6 for recruits, D8 for drilled and D10 for elites. The
Hero gets a D12! Each force can also be supported by a number of special characters, which can
include additional, lower level officers, sergeants, drummers, musicians, standard bearers and
scouts. All of which bring their own attributes to the game. 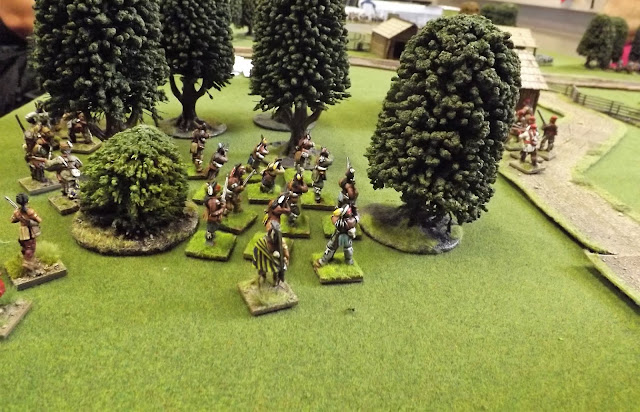 As mentioned, this is a card driven game, with each unit and each character having their own card,
plus an ‘end of turn’ card, a ‘reload card’ (all guns remain unloaded until this card comes up, although the sergeant does have a special attribute) and an ‘events’ card, which can be quite fun! As the author states though, if you don’t like the fact that not all your units move every time, leave the card out! 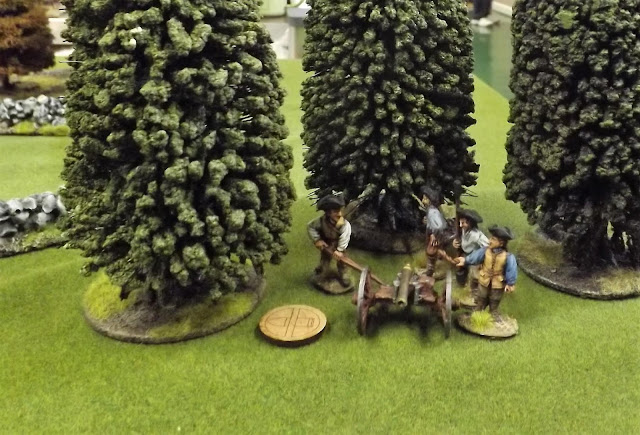 I won’t go into any more detail for now, but the rule book has one-hundred and seven pages, of which twenty-three cover the rules character abilities etc, the remainder given up to the numerous ‘factions’ that can be built, a breakdown of weapon abilities, a random events chart, six scenarios and a brief overview of some of the conflicts covered by the era, which I forgot to mention is 1660-1760! The FIW is not covered specifically in any of the above, but I’ve easily adapted it. 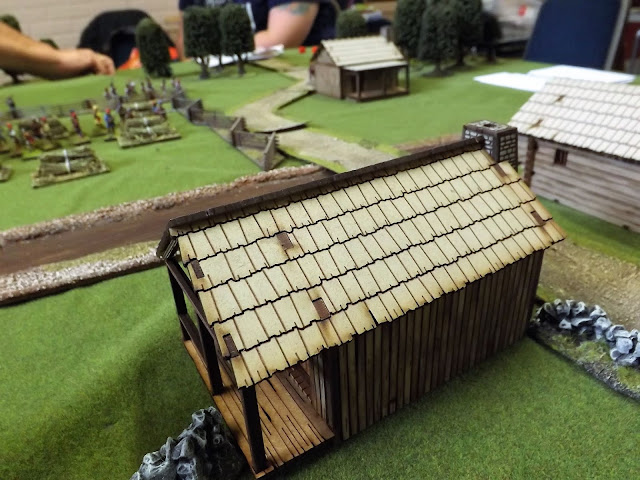 In my game I used the ‘rear guard’ scenario and just upped the ratio. The British rear guard
consisting of;

Opposed the French of:

Note on supporting characters; You can have a character for each force point you field. Each faction
has its own special characters, while some are generic, but limited in number. For example, the
‘Army’ faction (as above) is allowed a max of 1 x additional officer, 3 x sergeants & 3 drummers. 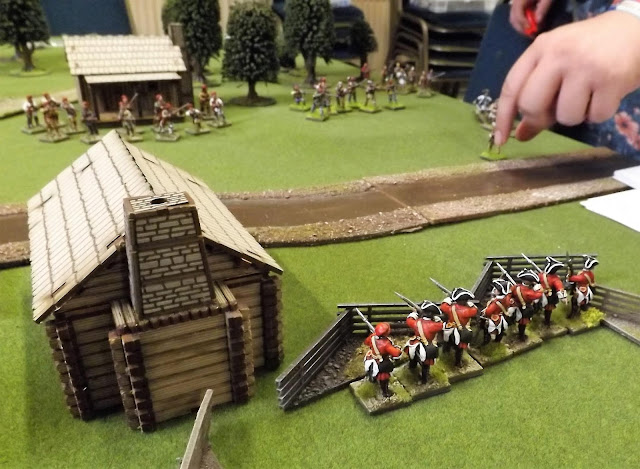 The British set up first, using hidden deployment on a hastily drawn map, although I decided that the
gun must be on the table. The French then came on from the table edge, when in fact I should have
allowed them to deploy a certain depth in from the table edge. My excuse is that we got stuck in
traffic on the way in, and were running late!! 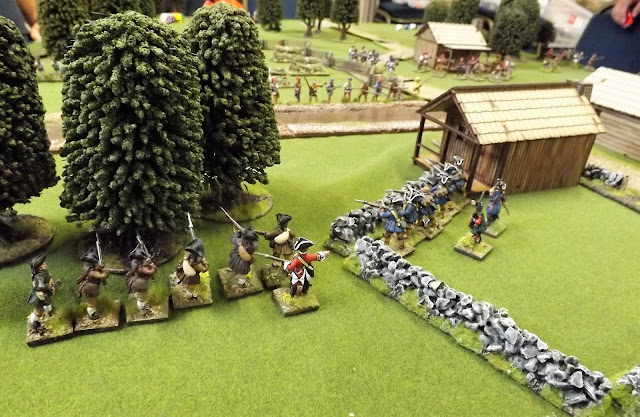 There wasn’t much for the British to do but sit and wait, and that probably went on for a move too
long due to the above! Eventually the French got within musket range (24’’) of the gun and started
taking pot shots at the crew. Fire effect was poor to start with, but eventually they got the range and
the crew started dropping. What the rules allow you to do is to replace crew with troops from other
units, along as at least one original crew member remains, which the British did to start with, but the
gun wasn’t a healthy place to be! The gun managed to reply, rolling a D8 to determine the number
of shots resolved against one enemy unit, then rolling D8’s again, requiring 6+ to score a hit. 4 hits!
But rolls of 1, 2, 3 & 4 were never going to worry the French! 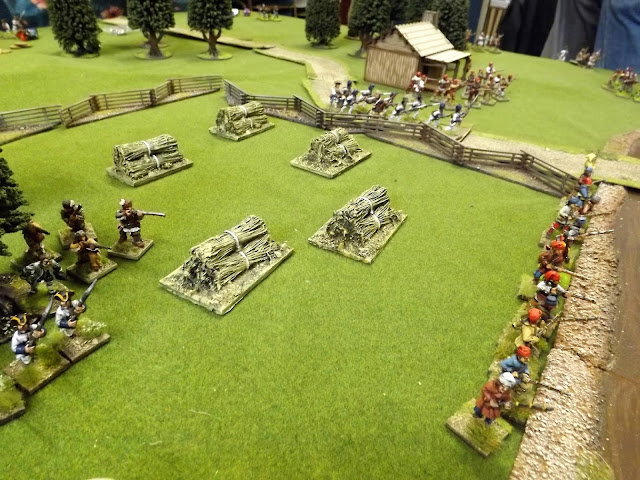 As the range closed, the British started to deploy their infantry and more of a general musket duel
ensued. There are some saving throws for being in cover and soon the French, not always trying to
push forward as fast as they might, were getting the worst of it. British elites in one of the houses
were charged by a French regular unit – bad mistake! 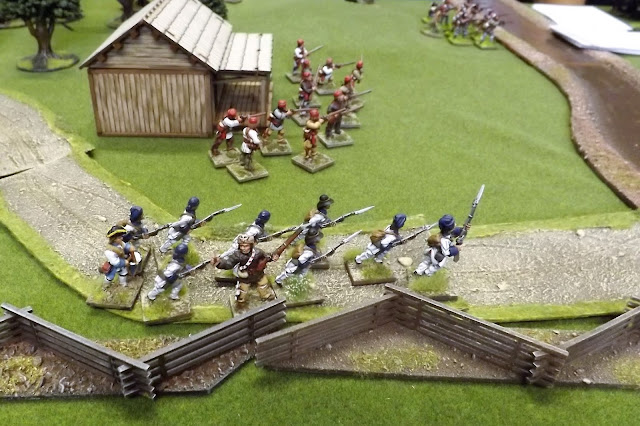 Some of the French units were starting to require morale rolls now, and my next mistake was getting
them to use D6’s instead of their relevant ability dice, with 5+ required to carry on. I blame the
traffic!! 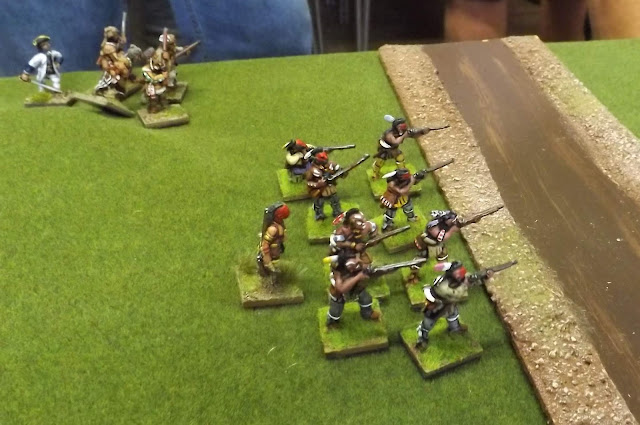 Eventually, what was left of one regular French unit was past the British lines and heading for the
table edge, but as the next ‘end of turn’ card was drawn and we counted up casualties, the French
were below 50%. A roll of 7+ was required, based on the highest ability of the surviving members of
the force – it wasn’t the French’s day!

Apart from being a bit rushed on set up, and forgetting a couple of things, the game ran well (in my
opinion!) and the guys seemed to like it, so thanks to Graham, Chris, Ian and Jason for an enjoyable
days gaming. Graham even said he was off to order the rules straight away, so it can’t have been
that bad!