Chas promised to give us a full blooded run out of Warlord's new offering "Cruel Seas". This is a
naval set of rules, together with a 1:300 range of small craft, from the forces that fought out actions
in places like the English Channel, the Mediterranean, Far East etc. 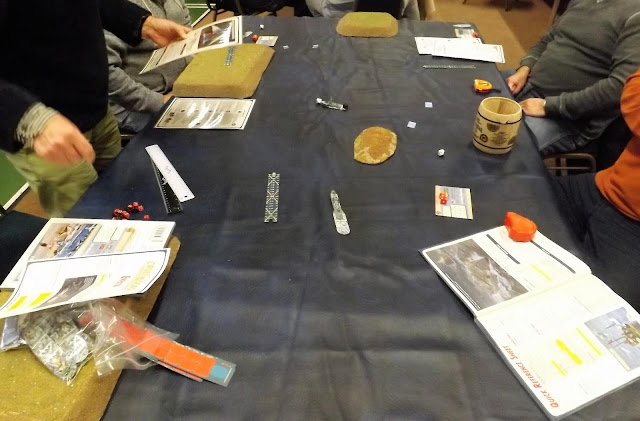 Our scenario took place in the North Sea, pitching Vosper 73 MTB's and Fairmile MGBs against
S-Boats (E-Boats if you prefer) and a small German convoy of coasters, armed trawlers etc.
The year was 1942 and the Germans were intent on moving heavy water from Norway, along the
coast to Germany, for use in their nuclear programme. The British Force consisted of a mix of MTBs
and MGBs, with orders to take out the freighters at all costs. 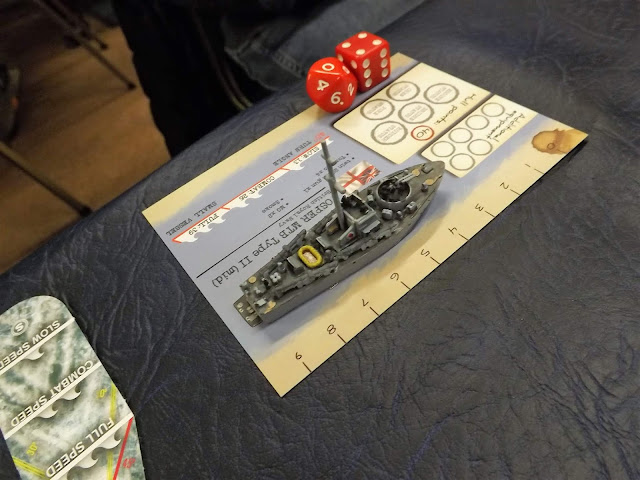 Bill and I flew the flag for the Royal Navy, whilst John and Chas played the Kriegsmarine forces.

After a quick conflab, Bill took half our force to strike at the head of the convoy, whilst I had the balance of our craft, ready to exploit any gaps in the convoy's escorts that Bill created. On the other side John took the fast craft escort, whilst Chas took all the slower vessels, such as cargo ships, trawlers and mine sweepers.

As soon as the convoy appeared, Bill launched a full blooded attack, firing a wide spread of torpedoes. As the fish were away, a vicious gun battle developed between the S-Boats and MTBs/MGBs. A Vosper and an S-Boat soon joined Davey Jones. 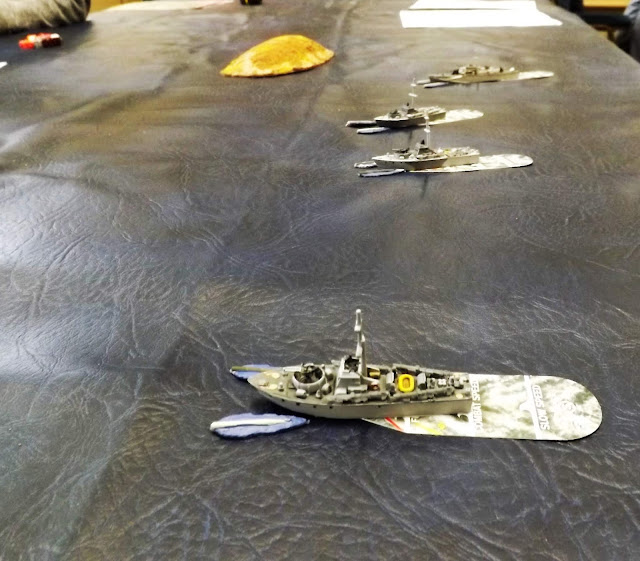 The convoy turned in an attempt to "comb" all the torpedoes they could, but four or five found their mark. At this point we tested for duds and all bar one was, with the remaining torpedo causing moderate damage to one cargo vessel.

The S-Boats and the heavy guns on the slow escorts were taking their toll on the British squadron,
with several more vessels being sunk, whilst the rest sought to turn to deliver another torpedo attack. 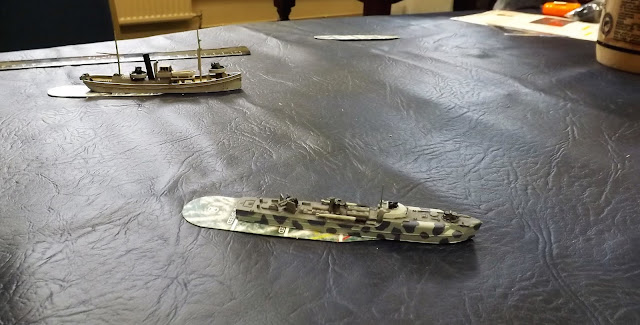 At this point I brought the other half of our forces onto the scene, together with our lone Blenheim bomber.

The Blenheim successfully strafed most of the convoy's larger vessels and turned for another run.
Bill's forces lost further craft and an S-Boat went down to the weight of concentrated fire. 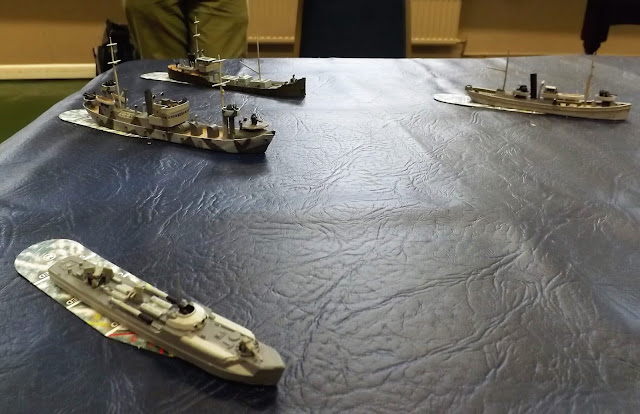 In this melee things became confused and one of my MTBs rammed my Fairmile, causing major
damage to both.

A further spread of torpedoes was launched at the convoy, as another MTB was sunk. 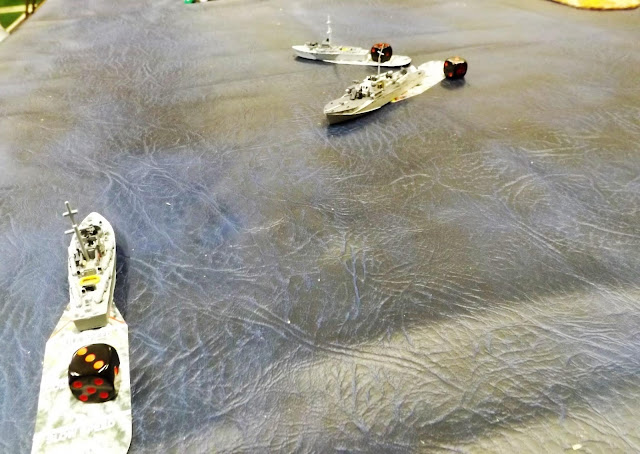 The fire of the minesweeper and armed trawlers was now finding its mark, but the Blenheim hit the
trawler with an airburst bomb, crippling the boat.

Several torpedoes hit home and all were duds. This was the British high water mark and the few British vessels capable, put the pedal to the metal and headed home.

It looked like the Germans were a step nearer developing a nuclear weapon. 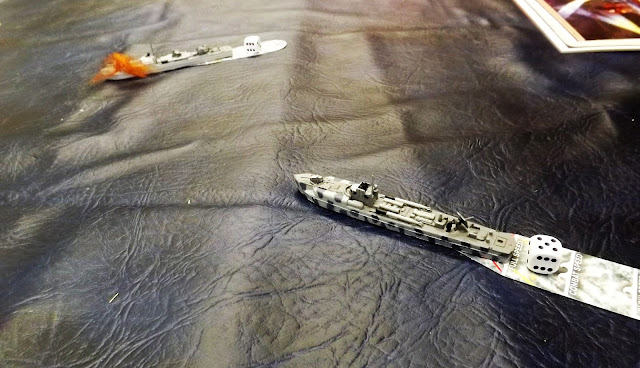 A good game, played in a friendly manner. We had some queries regarding the rules, despite the errata and had to use "house rules" to cover the situation.

The rules give a good game, although a few areas caused me to draw breath (a torpedo can't sink an
undamaged mine sweeper - really ?), but they are not insurmountable. 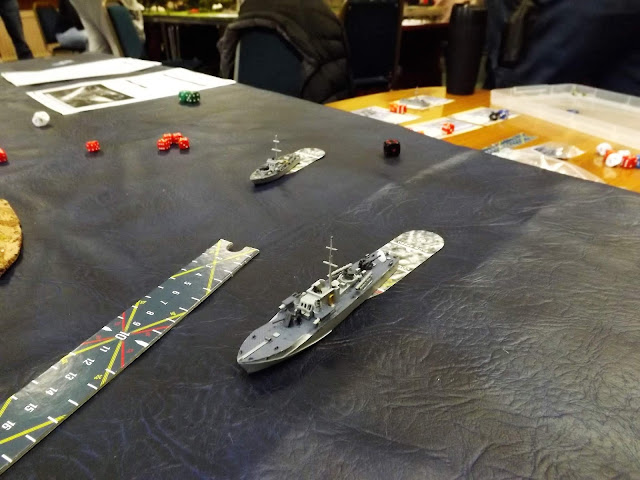 All in all a fun game, which everyone seemed to enjoy.

Many thanks to Chas for giving us the chance to play and painting a large number of vessels over the
past few weeks. The models are very nice and although I think 1:600 suits the game better, I can see
why Warlord have gone for the much more attractive 1:300 scale.