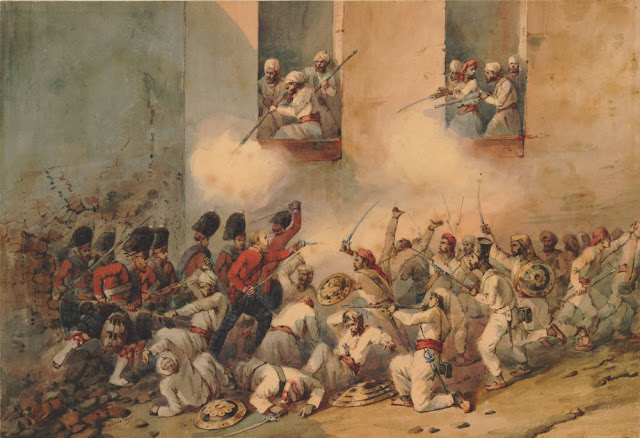 The Jack Tars (under the command of Chris) had got themselves in a bit of a pickle they found themselves in fort Kosai running low on ammunition. 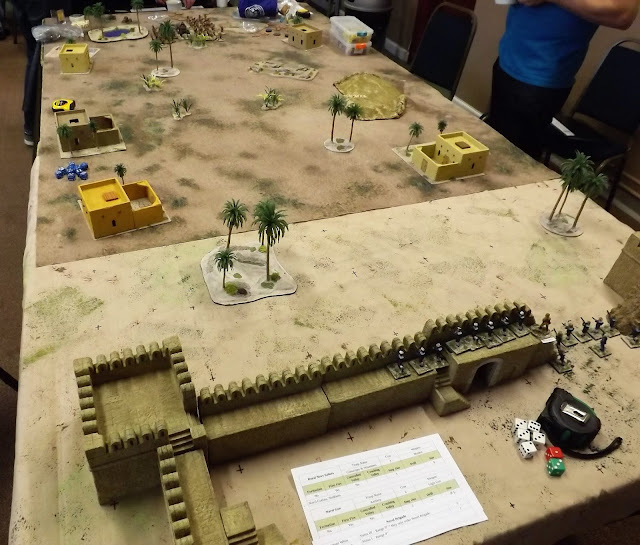 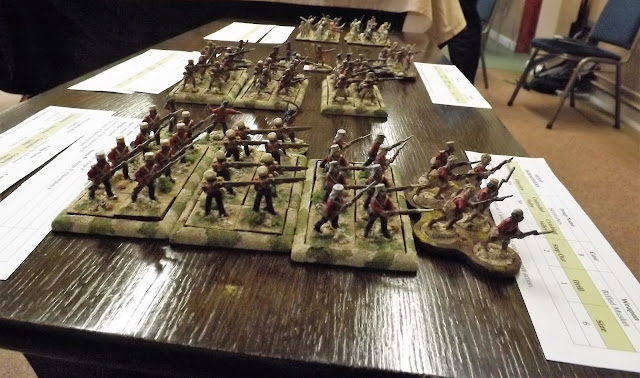 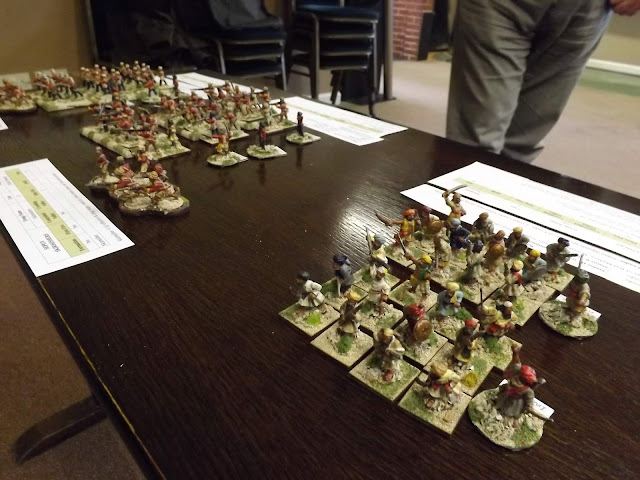 A cheer went up when a supply column (David) consisting of the 93rd Highlanders and the 3rd Native Bengal infantry were sighted. 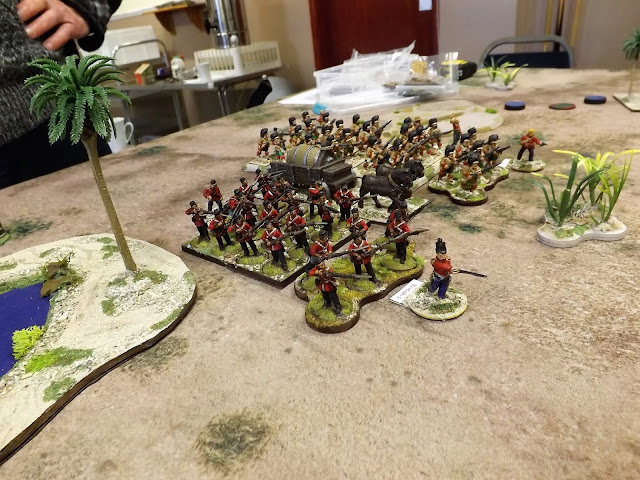 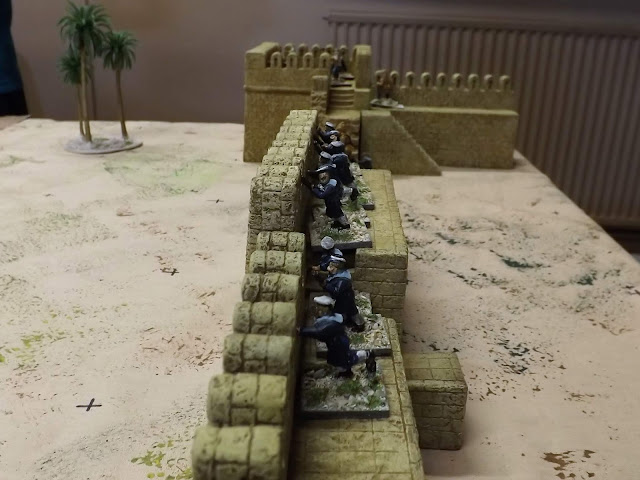 The column advanced through the scattered houses surrounding the fort with their skirmishers scouting ahead, when they were fired on upon by mutineers (John) from two of the houses. 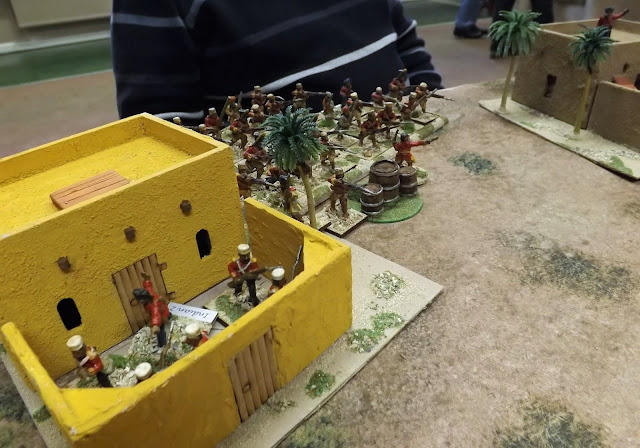 A fire fight developed between skirmishers of both sides, meanwhile the 93rd and 3rd formed lines to each side of the wagon. The skirmishers on both sides were depleted and forced to withdraw. 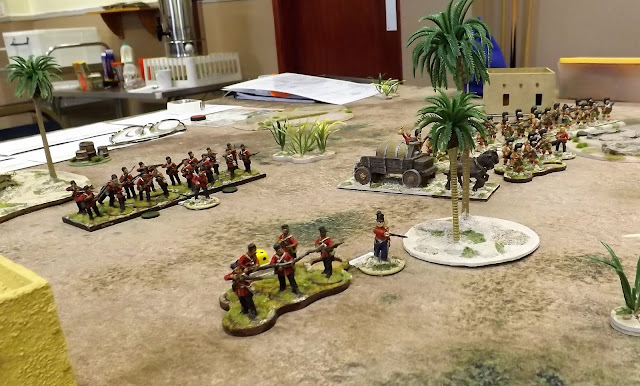 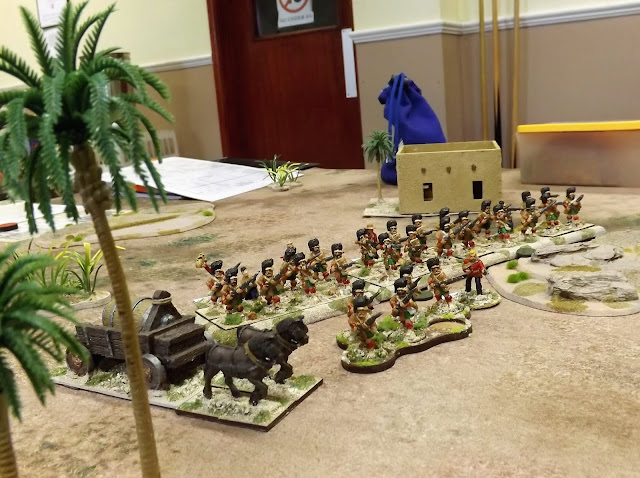 The Navy provided covering fire onto flank of a line of Sepoys advancing out the buildings causing
some shock but not enough to stop them advancing. 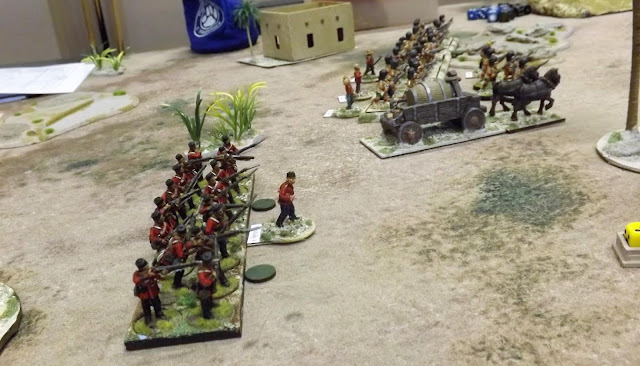 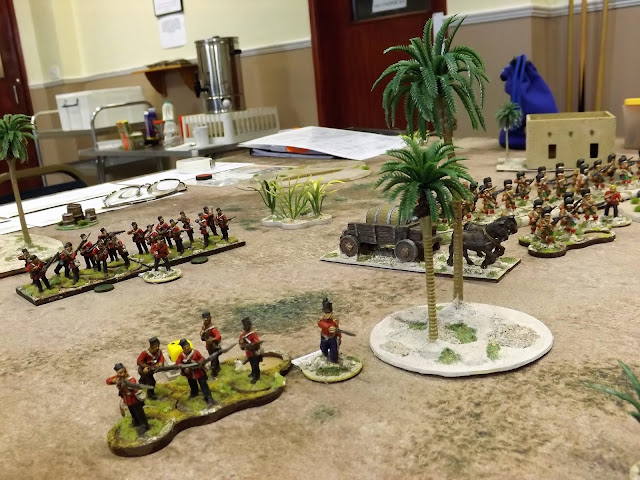 A bunch of local 'badmasher' ruffians (Mark) attempted a surprise attack onto the flank of the 93rd but their canny commander anticipated the manoeuvre peeling off two units forming a line facing the ruffians. The ruffians charged over the crest of a hill but the failed to contact the 93rd taking fire which caused enough shock to reduce their fighting efficiency when they gallantly charged a second time into contact. 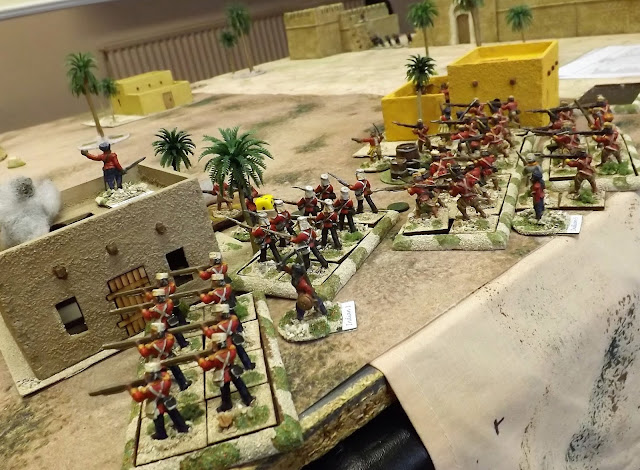 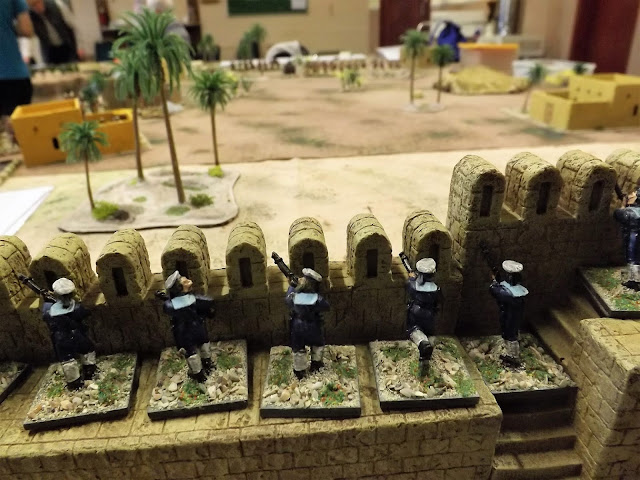 The 93rd were jubilant as the ruffians retreated, but the jubilation was short lived. The Navy sallied out of the fort to assist their rescuers but before they reached the conflict the waggoners decided to make a run for the cover of the fort. 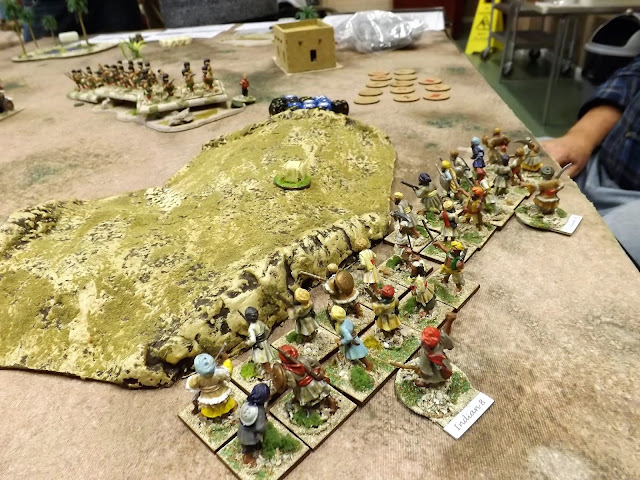 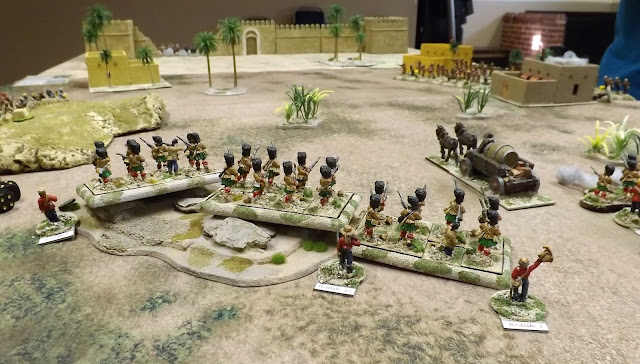 The Sepoys seized their chance and charged the wagon hitting it with two units one being repulsed
but inflicting enough damage that combined with the second attack destroyed the wagon thus
winning the game. 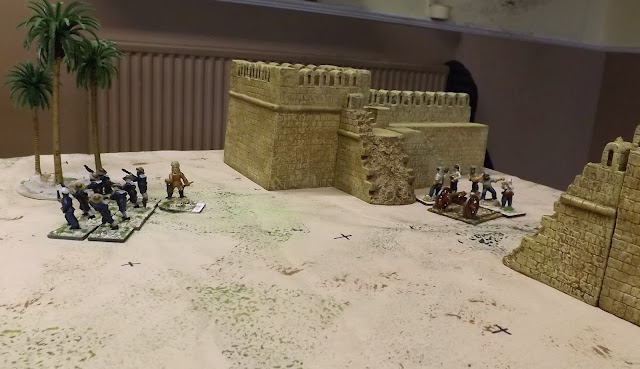 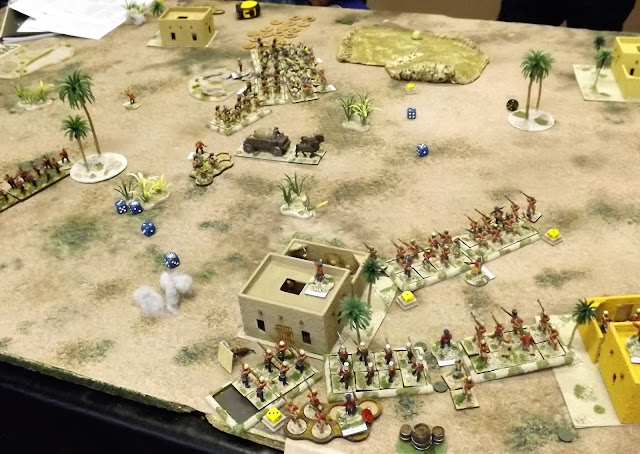 Then both sides with much reduced moral decided to break off the fight. The British were able to withdraw having at least rescued the sailors. 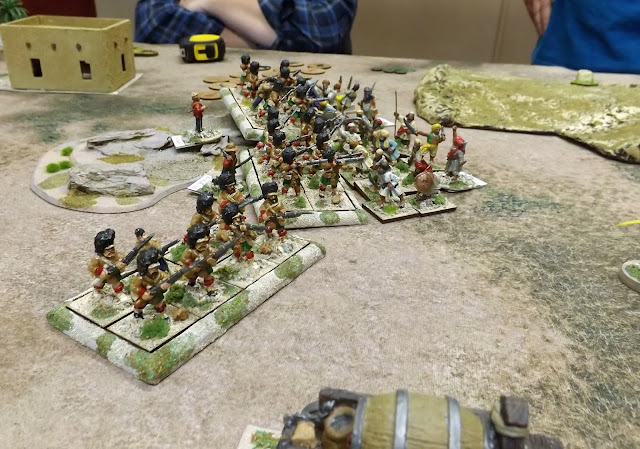 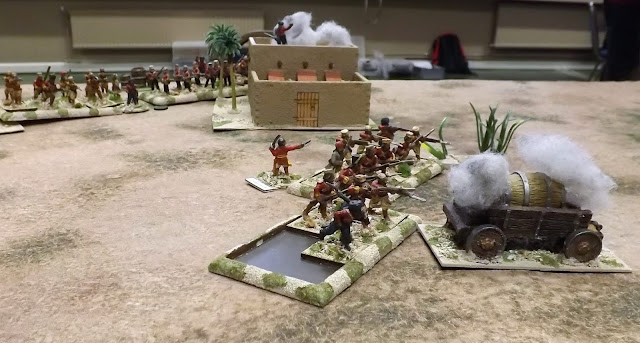 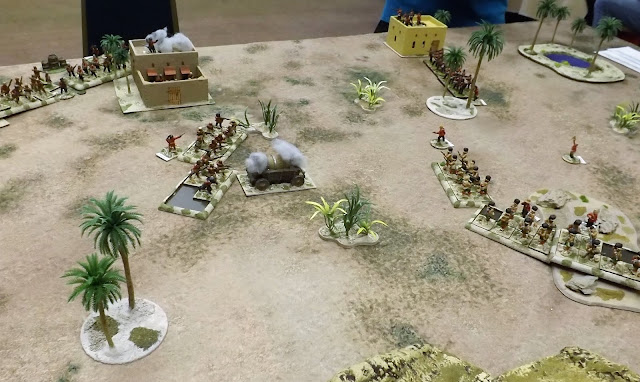 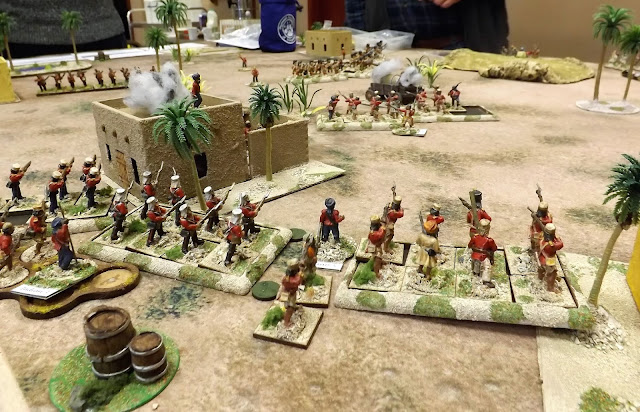