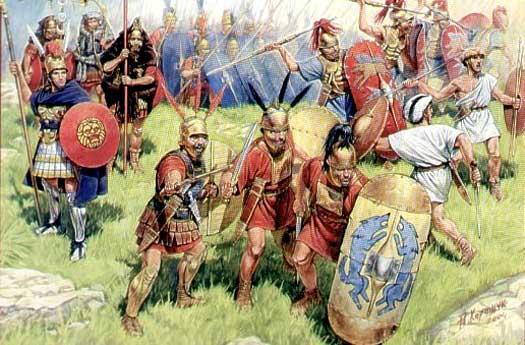 Our third game at club last month was a 15mm Hail Caesar game put on by Nick and Steve L and involved a strong Roman force reinforced by Campanian allies taking on a Samnite army supported by Gauls. 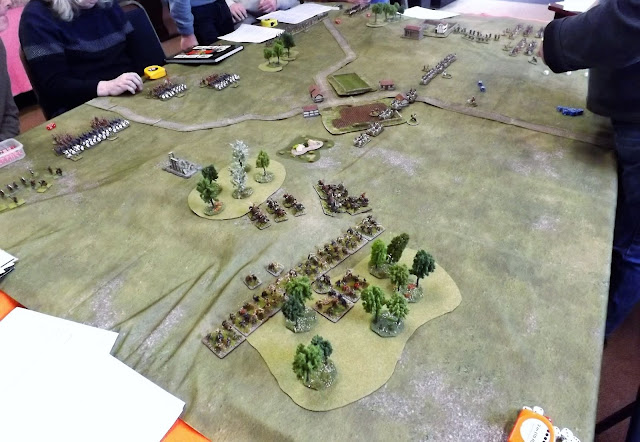 Both armies were split into four roughly equal infantry divisions with sufficient cavalry to make another two if the players wished to break them off. 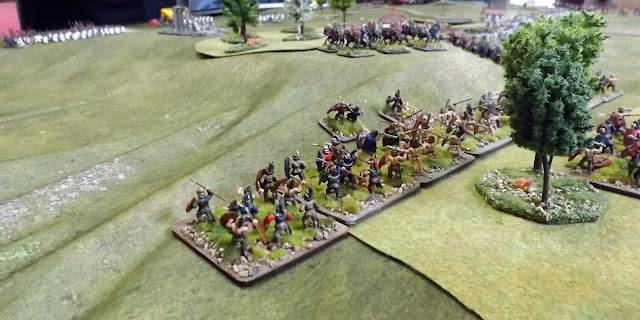 The Romans set up with most of their heavier cavalry on the far left of the table with the Campanian allies off to their right, two bodies of Romans held the middle with the intention of taking the central position containing a ruined temple and a small village.

Out on the right facing the Gallic wing of the enemy army was the last of the Roman infantry along with what remained of the cavalry. 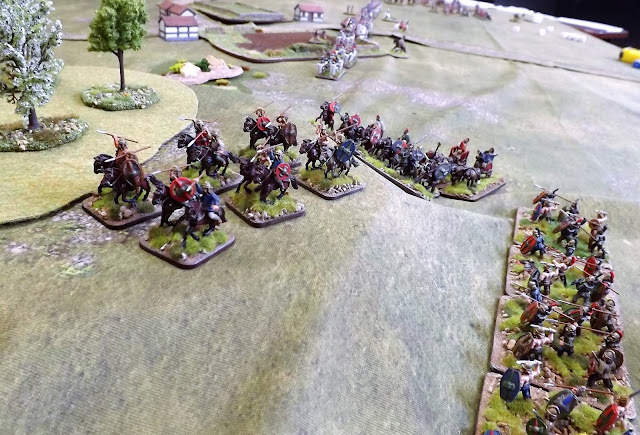 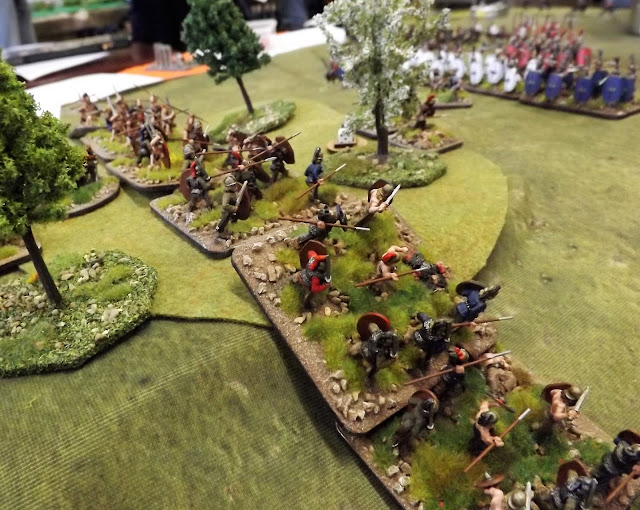 The Samnites held the centre with their heavier infantry and placed the rest of their infantry either side, the Samnite cavalry faced off the Roman cavalry out on the wing. The Gaul’s were given the left hand side for their mixed force of warbands, chariots and cavalry. 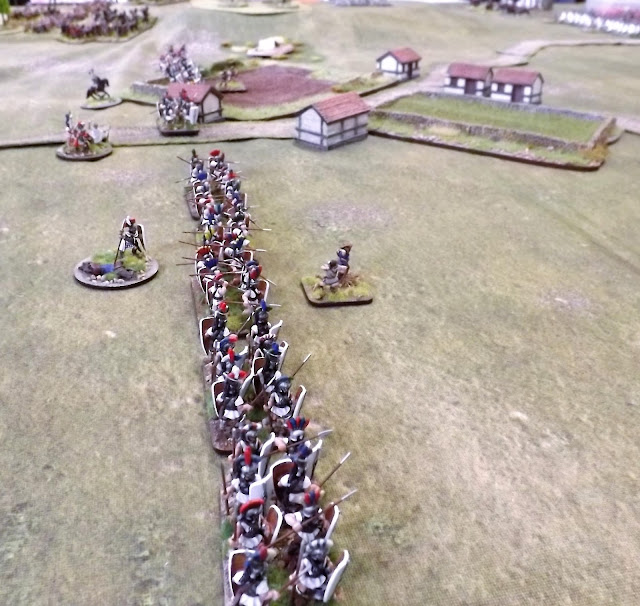 The Roman cavalry and Campanians had a bit of a problem, they were facing two Samnite infantry blocks and a strong force of cavalry so whilst the Romans held back their cavalry south of the nearby woods and guarded the edge of the table, the Campanian long spear phalanxes along with supporting infantry slowly advanced whilst trying to maintain contact with the forces either side.

In the ensuing combat the phalanxes held the initial Samnite rush with their heavier armour helping to slightly nullify the pilum coming their way but casualties quickly mounted on both sides for those who were not so well equipped.

Over time both sides were tiring with most units seeing red dice indicating shaken status replacing the normal white ones however only the larger Campanian units could absorb so many hits and their weaker supports started to leave the table along with some of the Samnites. 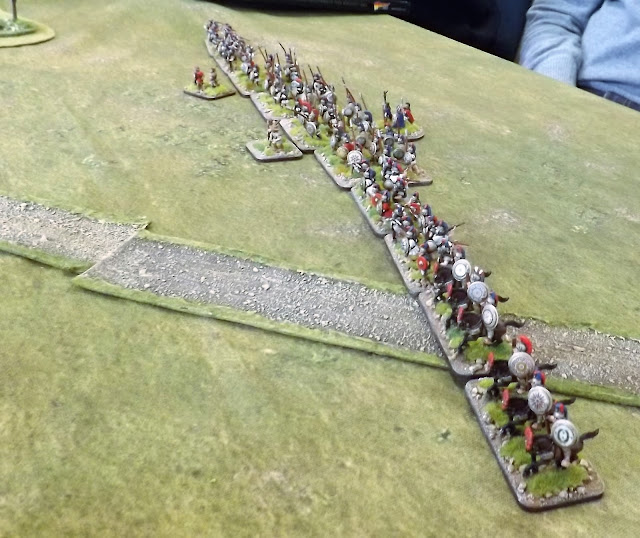 To their left with the enemy coming around and over the wooded hill and threatening their allies flanks the Roman cavalry had to now get engaged and try and hold them for as long as they could.

Overall they had the upper hand and the Samnite cavalry was pushed back all along the line however the supporting infantry ignored all this and closed in on the open Campanian flank. With no help available it wasn’t looking good if you weren’t a Roman with access to a horse. 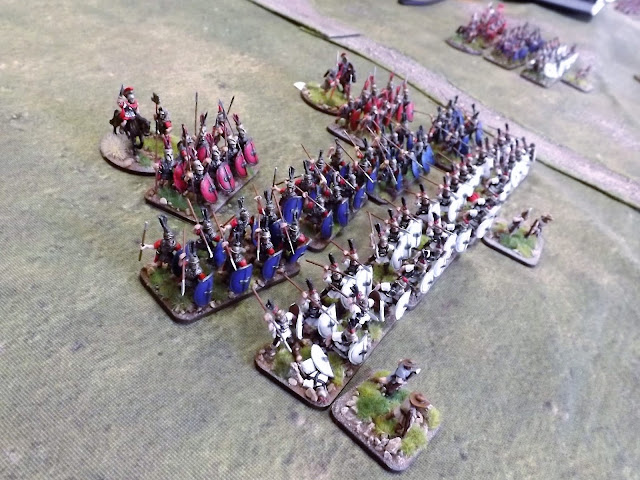 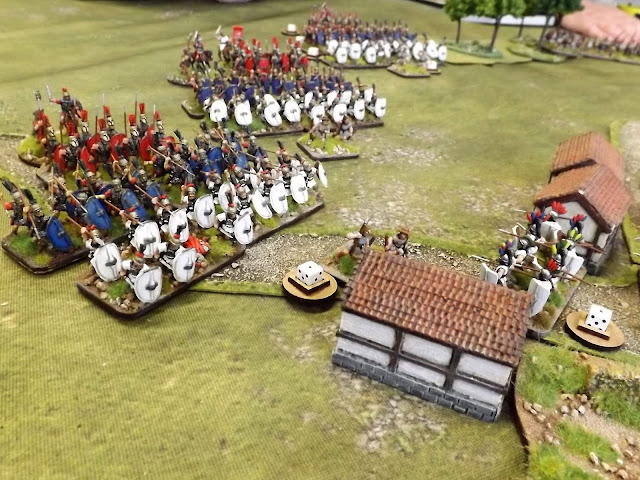 In the centre the heavy Samnite foot had occupied the buildings and ruined temple, here they faced two divisions of Romans advancing in their traditional three lines of Hastati, Principes and Triarii. Try as they might the Romans couldn’t dislodge the defending Samnites and sluggish movement through the village and dogged resistance from the rest of the Samnite infantry prevented them from turning in on the Temple from the flanks.

The two sides slugged it out without conclusion so let’s move on to something more interesting. 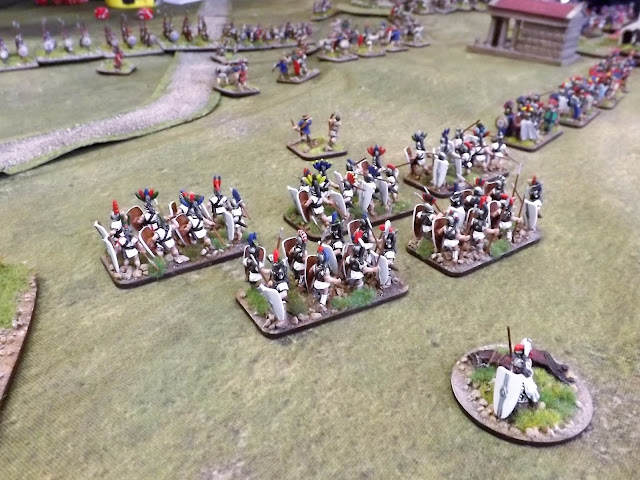 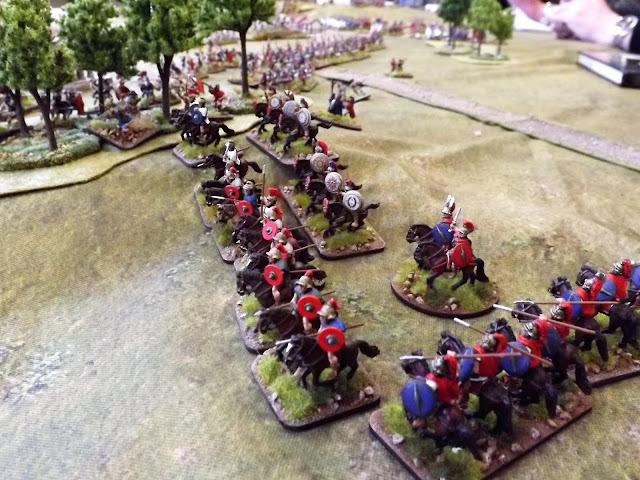 On the Roman right a solitary Roman infantry division had the problem of hordes of ‘hairy Gaul’s racing towards them along with a substantial mounted force.

The supporting Roman cavalry consisted mostly of lighter troops and using the traditional tactics of darting in and then evading as necessary managed to slow up the Gallic chariots and cavalry for some time, eventually of course they had to commit and after a valiant struggle they and their single unit of mediums were broken but not before causing their enemy to take significant damage and putting them out of the game for several turns whilst they reorganised. 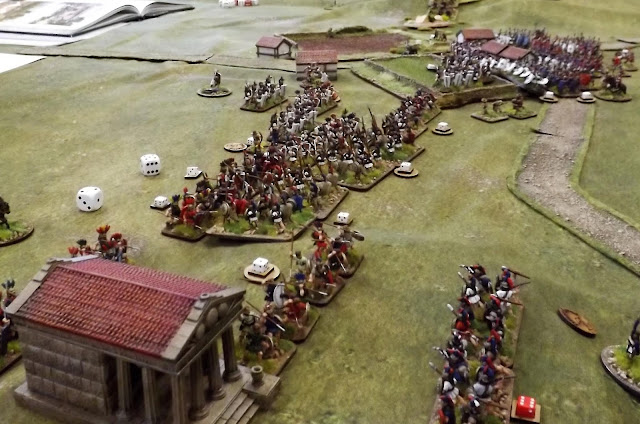 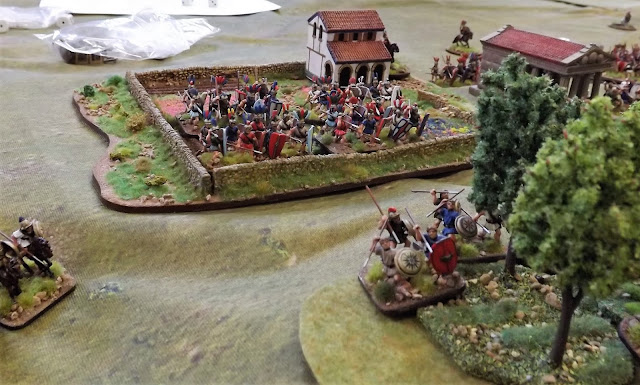 As the cavalry melee was reaching its dénouement, the Gallic warbands and the Roman infantry finally met each other on the top of a nearby hill.

The Romans lost, badly. Their smaller units could support each other whilst the large warbands got in each others way and generally had to fight singularly but when you only take four hits to be shaken and the enemy have nine attack rolls then it isn’t going to be easy especially at this time only the Hastati have Pilum and the Triari are the only ones with Heavy armour.

The Romans hung around for two or three turns but there were just too many Gaul’s and all of them were in much larger units and so after lopping off sufficient heads to take back as presents for the wife and kids they went looking for more action. This happened to be the Romans still trying to clear the village and temple. 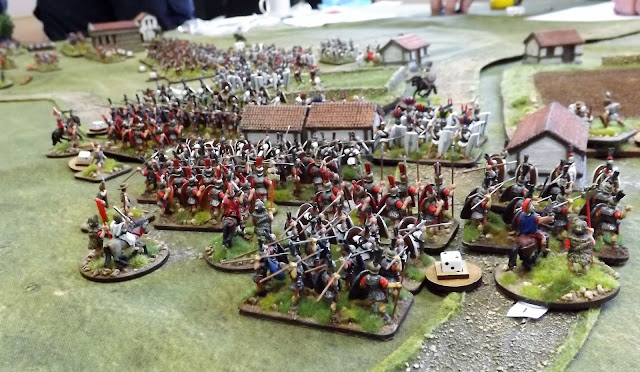 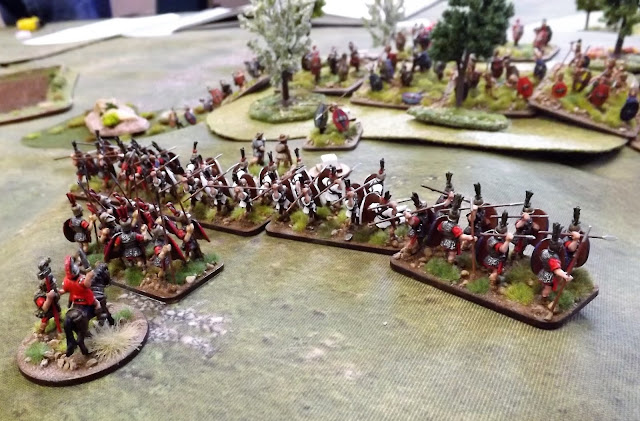 The Romans now with both flanks collapsed and the Samnites showing no sign of being forced out of the Temple ordered a general retreat, which wasn’t going to be easy but as no one plays retreats it was therefore deemed to be pub time. 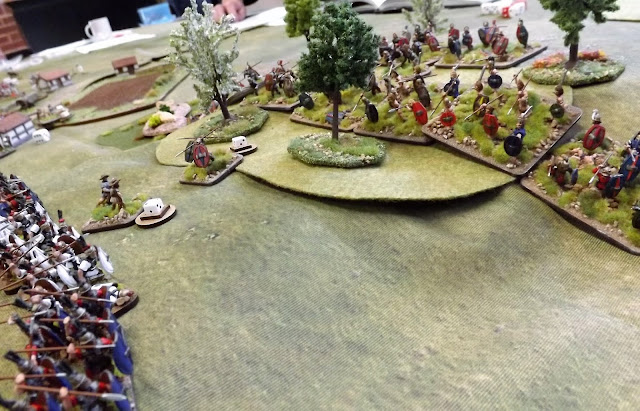 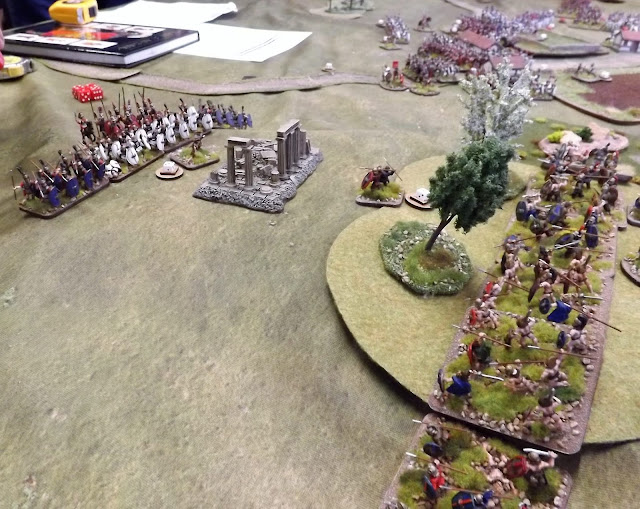 This period of Roman history is quite interesting as they do not have the overwhelming advantages found later on; there is only limited use of the Pilum and only gradual improvements in armour. You also have a large variety of different opponents to take on and who, when they are not fighting the Romans, fight amongst themselves and this expansion of Rome into central and southern Italy would make an excellent campaign. 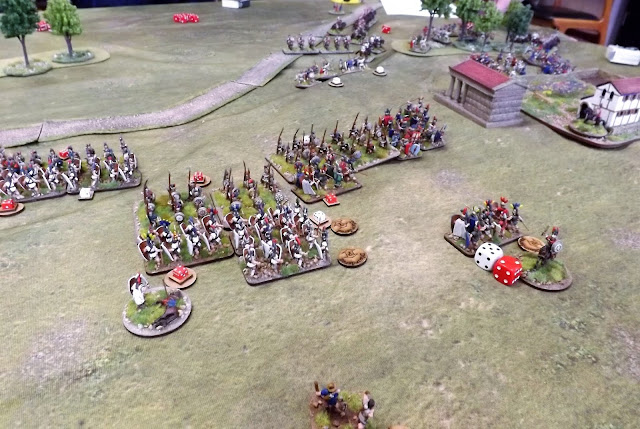 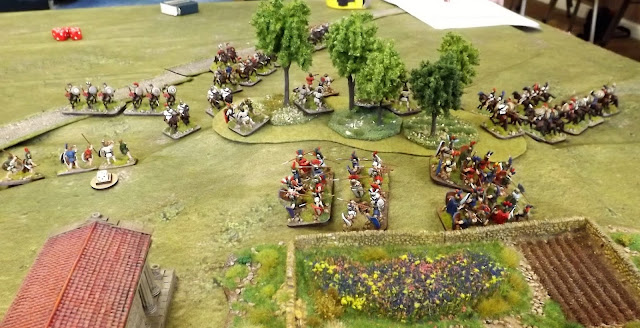 We followed the Hail Caesar rules more or less as written with only minor changes, we allowed a single direct move ahead after failing a movement order for the unit or group concerned so as to speed things up, for the same reason we allowed the Gaul’s to move through the woods without penalty otherwise it’s a long way to come for the day and not do any actual fighting for the player concerned. 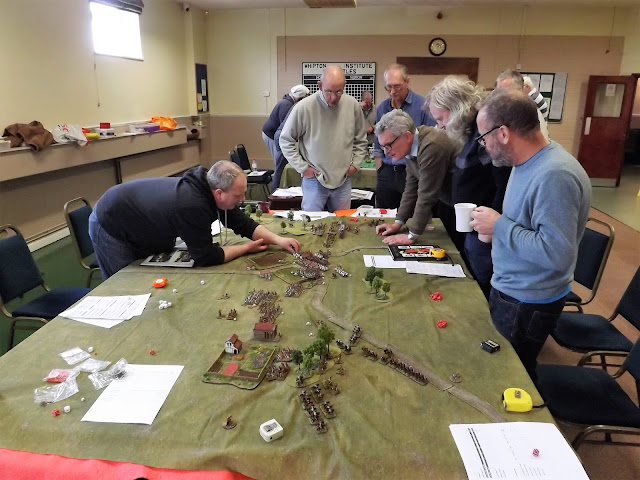 This has been a Mr Steve Production
Posted by carojon at 07:21