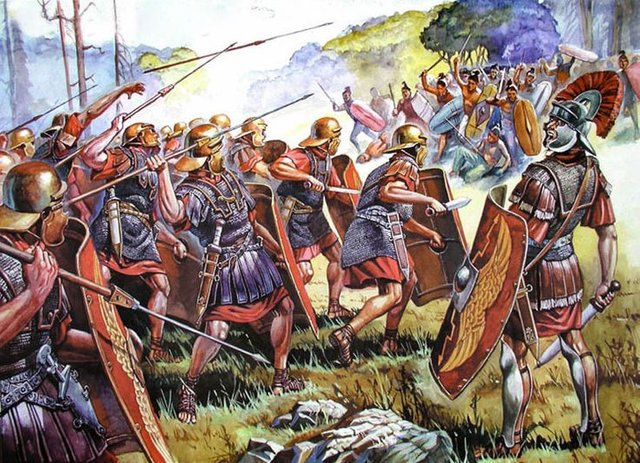 This battle was part of the long running civil war fought between those who supported Marius and those who supported Sulla, both men at various times were in power in Rome and although both were now dead their supporters scattered around the Empire fought on.


Sertorius was on the Marian side and had been sent to Spain as it’s pro-consul, here he gained control of the two provinces that Rome held which were mainly along the coast and fostered good relations with the Spanish in the Interior. With the Sullan side now in charge in Rome they sent various forces to try and oust Sertorius from Spain but met with little success as he defeated all that were sent against him. Eventually Pompey got himself posted to try his luck but nothing changed as in a series of battles he fared no better than any of the others.

If you want to know more about the eight year Sertorian war then see the link below:


Sertorius was one of Rome’s better generals and virtually unknown in comparison to Pompey, Julius Caesar, Scipio etc. I can recommend the following book on his life if you want to dig down deeper, written by Phillip Matyszak who is one of my favourite history writers which helps of course.


The Battle of Saguntum was his last major battle as afterwards he reverted back to a guerrilla style of war and fearing that the conflict would never end, he was assassinated by some of his generals.

Trying to re-create the battle isn’t easy as there is very little to go on, I did find someone else’s AAR from which I pinched the terrain from and there was a series of scenarios for the whole war written up on the GMT site from their Great battles of History /Caesar game which gave me a few hints but didn’t help me as much as I hoped. We are told that both forces were reasonably equal with Pompey having around ten legions of various strength plus assorted allies and auxiliaries. Sertorius was down to the last of his roman legions that had arrived in Spain with other Marian supporters over the eight years and of course loads of Spanish.


Using my Marian Roman and Spanish Hail Caesar armies as a core I then fleshed out both sides with what I thought looked appropriate and came up with two armies at about 750 points each and so making it be one of the bigger games we had put on at the club, falling just short of our re-fight of Paraitkene back in 2015. 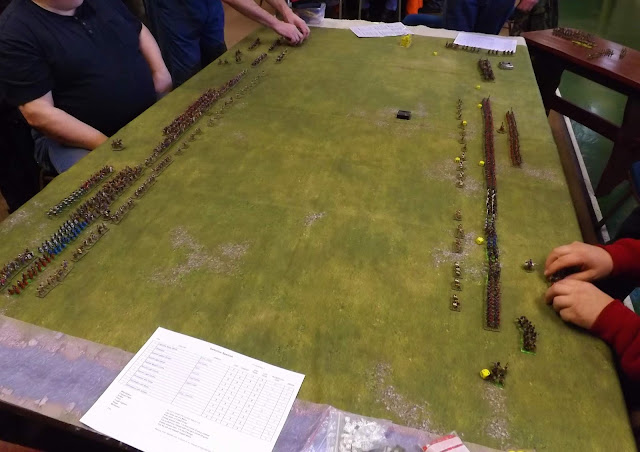 The forces used in my game are as below and are described in Hail Caesar terms. 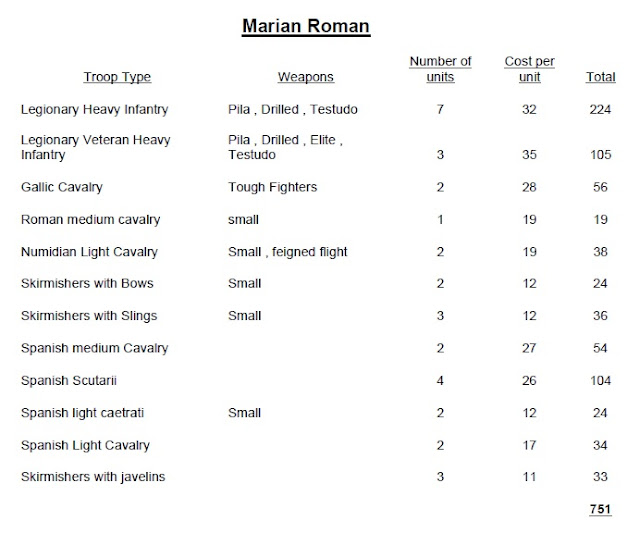 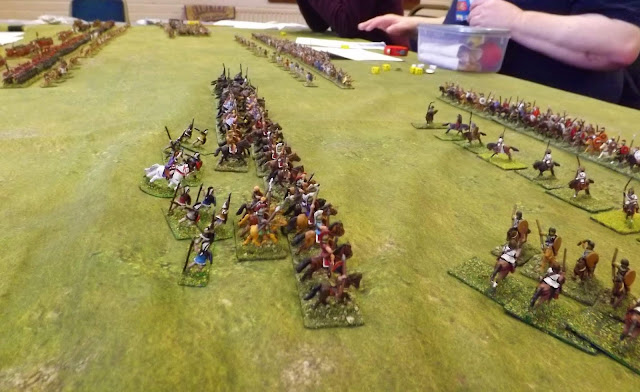 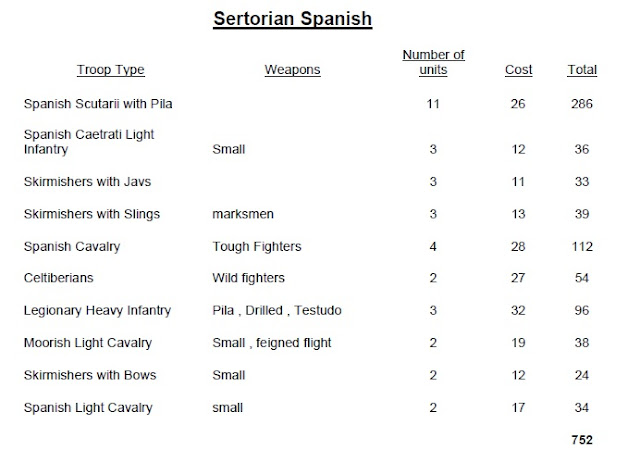 Onto the game:
The Romans set up with a centre composed entirely of Legionary’s, their right had most of their cavalry and the left against the river had a few Romans along with all the allied infantry and some cavalry. Facing them the Spanish held their centre with scutarii, a lot of scutarii, their left wing consisted of all the cavalry and their right against the river had the three Roman legions, any remaining scutarii plus the Celtiberians.

It was on the wings of the battle where it was decided; both sides cavalry skirmished briefly using their light cavalry out in front to buy time for their heavier colleagues to get nicely lined up. Despite being evenly matched the Romans got by far the worst of the fighting and this division was utterly broken after 5-6 rounds of fighting, the decision by the Romans to post some of their cavalry out on the left wing where they didn’t take part in anything useful now looked an error although having some untouched cavalry is always handy to cover a rout. 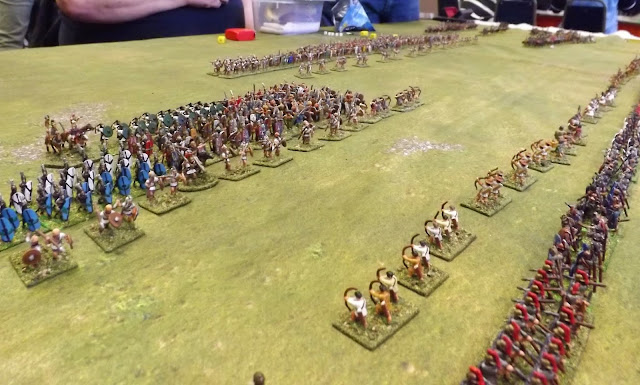 The Spanish cavalry were still in a good enough state to start threatening the Roman centre which despite vigorous encouragement from the umpire (which I can confirm stayed within UN guidelines) was still hanging back from actually trying to hurt anyone, apparently pinning their faith instead on a hard hitting poster campaign and possibly a robust chat around a drum circle. 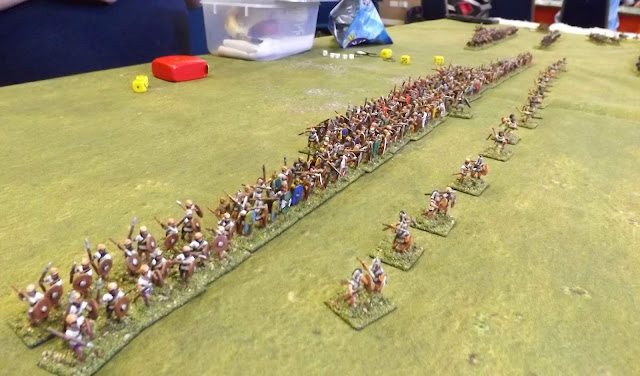 Maybe seeing what was happening out on their left flank was influencing there decision.

Taking the advice of the now rapidly fleeing Roman cavalry commander to close up ranks with their legionaries, a particular favourite despicable tactic of said commander, they allowed the Celtiberians to charge in and whilst they held their ground for a while, their Spanish allies facing what remained of Sertorius’ roman infantry quickly collapsed. There was some imbalance of forces on this flank and the Sertorians did take some losses but the Roman left was getting chewed up the same as their right had been, just a bit more slowly. Some honour was maintained by what viable forces remained as they gradually fell back onto the centre preventing a second envelopment taking place. 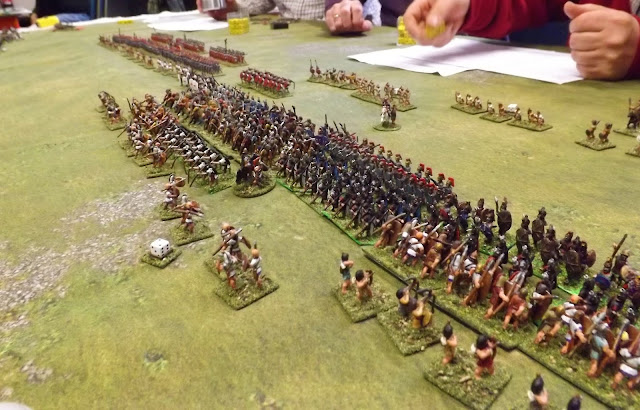 The Roman centre meanwhile after being assured that they would definitely smash through the imposing massed ranks of Scutarii facing them moved in and got down to doing what Romans do best, killing people with less armour than themselves, only in this case it didn’t quite happen that way. Sertorius’ Spanish infantry played the unexpected tactic of not dying, instead, in an event that never happens when I fight against Romans, it was the Romans who failed their armour saves and then accompanied by some very childish noises from those watching, failed their morale rolls as well. 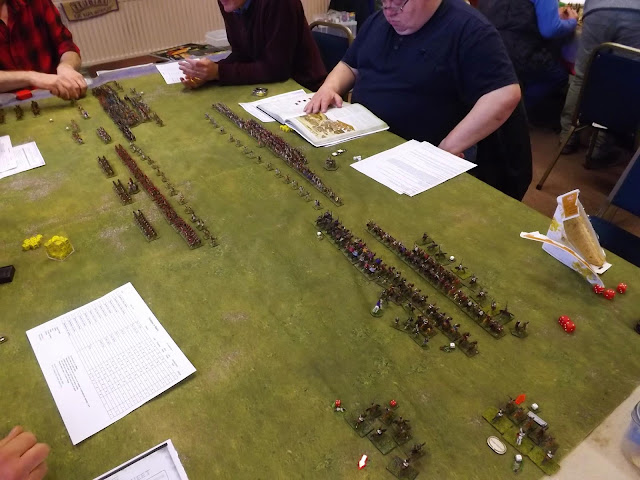 All in all it was suddenly becoming a good day to be Spanish, not a term often heard throughout history. With cavalry coming one way and victorious scutarii coming the other, someone’s flank was going to get hit and those Romans who had been peeled away to fend off the cavalry soon found themselves in a very sticky situation as their friends to the front stopped being of any help unless the Spanish tripped over their dead bodies. 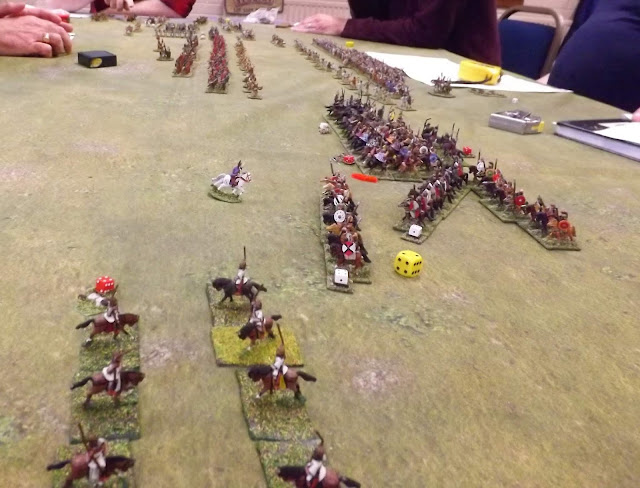 Outnumbered and with enemies closing in from all sides, the Romans desperately fought on until the new members who were taking part in today’s game had it explained to them about the club rule where you calculated the ratio of pub time versus no chance of you escaping the mess you are in. 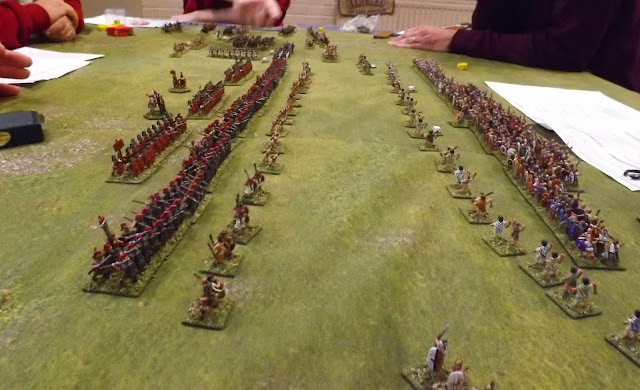 The real battle according to the Romans was more or less a draw with Sertorius losing the last of his Roman troops and both sides taking roughly even losses, Pompey despite his greatness got the run around in all the battles he fought against Sertorius, then again, he didn’t do that well against many others when you think about it. Fame after all is chiseled in stone by those with either have a good PR team or are the winners. 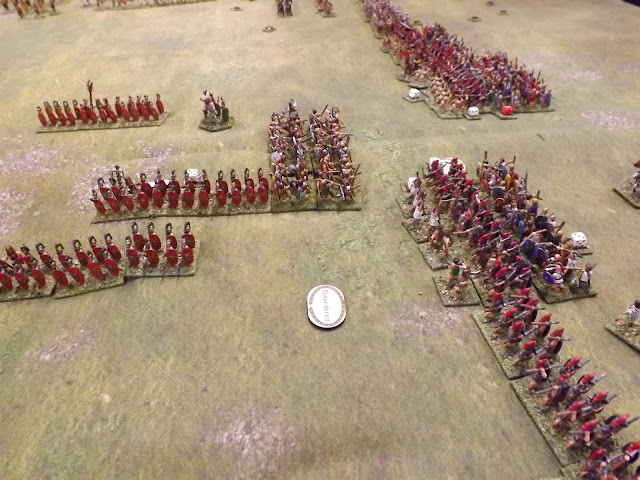 Thanks to all who took part and whose names I couldn’t be bothered to write down but probably included several Steve’s.

Figures: mainly Ancient and Modern, a few Magister Militum, War and Empire and wherever Steve Huntsman’s stuff was from

This has been a Mr Steve production
Posted by carojon at 10:36