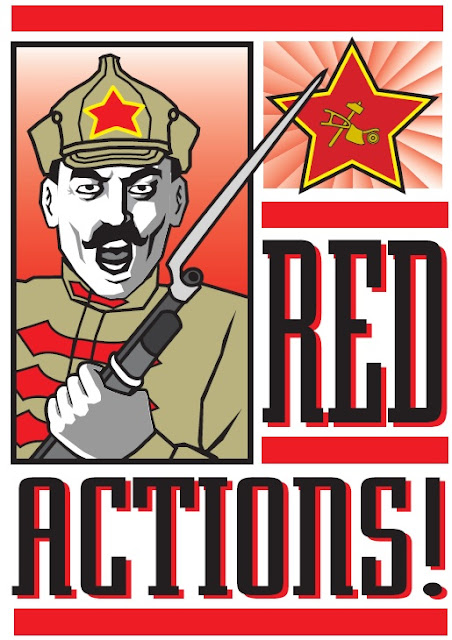 Originally billed as an AWI game, after a quick figure count I realised I couldn’t field enough troops for four players. I’d intended bringing John Bull/Patriots to the table. After some head scratching, I decided the best solution was Red Actions, similar rules and long overdue an outing.

The scenario came from the generator in the rule book, ‘Is that the Chattanooskaya Choo-Choo?’ The attacker, the Whites in this case, need to secure the rail station before an ammunition train arrives in order to capture it intact. 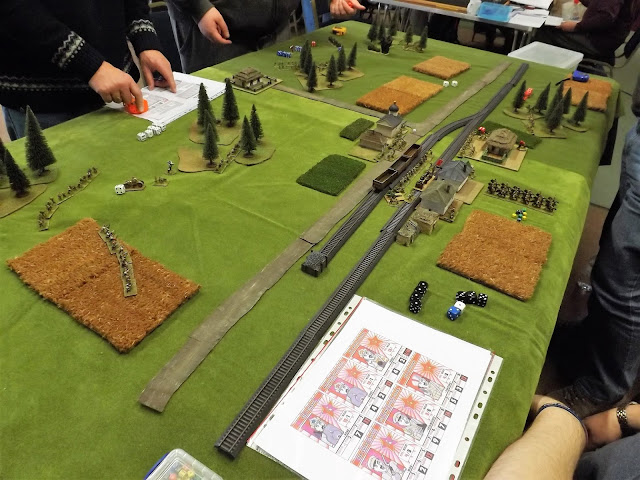 I rolled for the forces as per the scenario generator, the Red defenders getting 180 points and the White attackers getting 260. This gave each Red player three companies of five platoons, all Red Regulars, an MG each and a field gun each. They also had a squadron of Red cavalry and a spare MG. 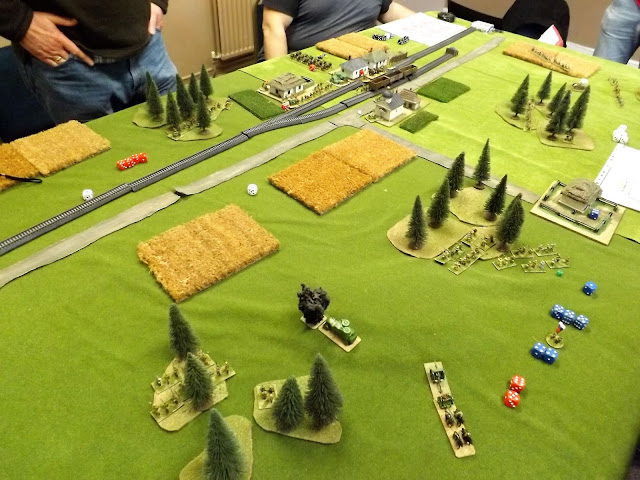 The White players each had two companies of six volunteer platoons and a company of five Colour infantry platoons. They shared out four MGs, an FT17, one field gun and an Austin-Putilov armoured car. 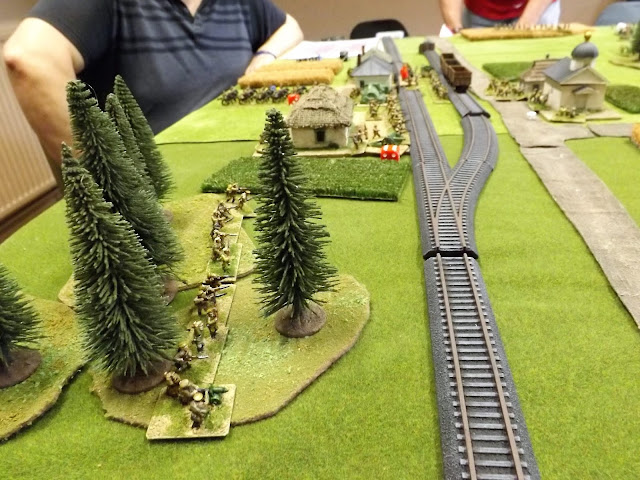 Since I was not as familiar with the rules as I’d like and the players were all new to the game, I avoided Commissars and other complications. As a house rule, we decided action sequence by dice roll. Each player rolled a handful of dice, one for each element with sixes being wild. Dice were then allocated to an element in numerical order. Ties were re-rolled and sixes could be used whenever the player chose. This seemed to work well and at a couple of points made for some interesting twists. 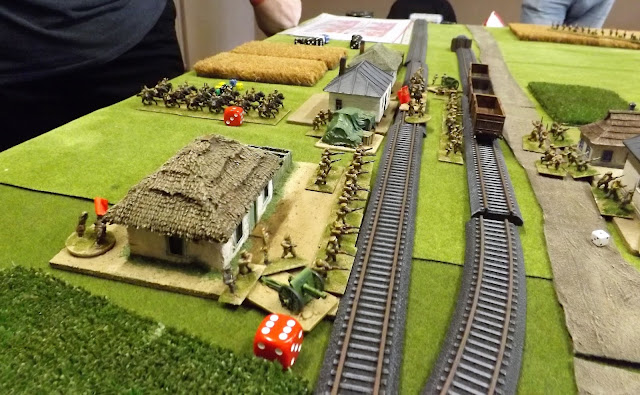 The Reds set up around the rail station making use of buildings and what cover they could. The Whites entered from the far edge, a little further back then the scenario suggests, to give players a turn or two to familiarise with activation and movement. 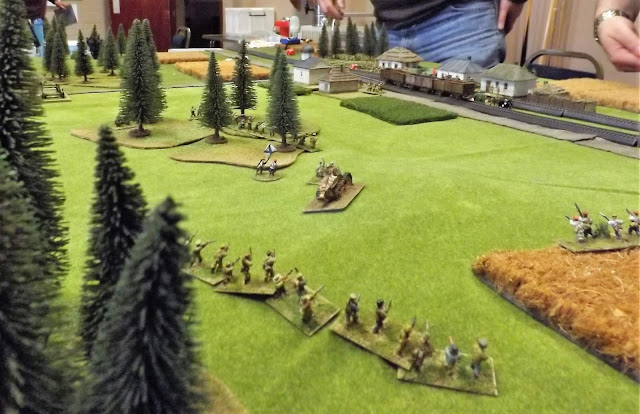 There didn’t appear to any particular plan on the part of the Whites, other than ‘You go up that side, I’ll go up this side.’ A clearly inexperienced White gun commander quickly discovered that a limbered gun on a sky line makes a good target. After beating a hasty retreat, a more cautious approach then followed. The Austin AC was similarly incautious, but the hapless crew didn’t get a second chance. The Red gunners were on their game. 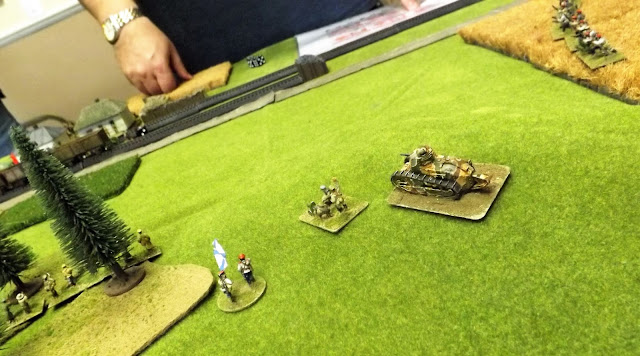 On the Whites’ right a steady advance brought them up to the trees overlooking the sidings. Under covering fire from the FT, the Colour infantry attempted a flanking manoeuvre. At the first attempt they were beaten back by rifle and MG fire, whilst the Red field gun duelled with the FT. 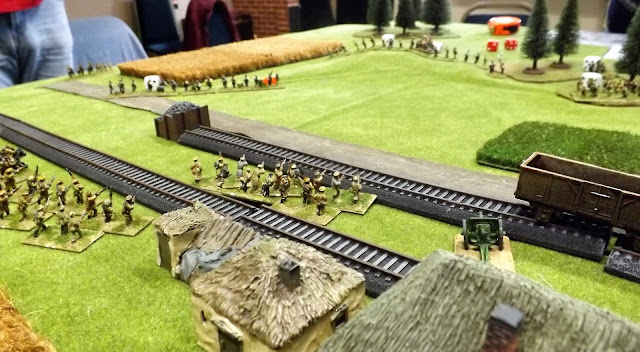 On the White left, some order was being imposed and slowly troops, MGs and the field gun were positioned to win the firefight. The Whites scored a major blow when they managed to rout the crew of the Red FG, who routed away before they could be rallied. 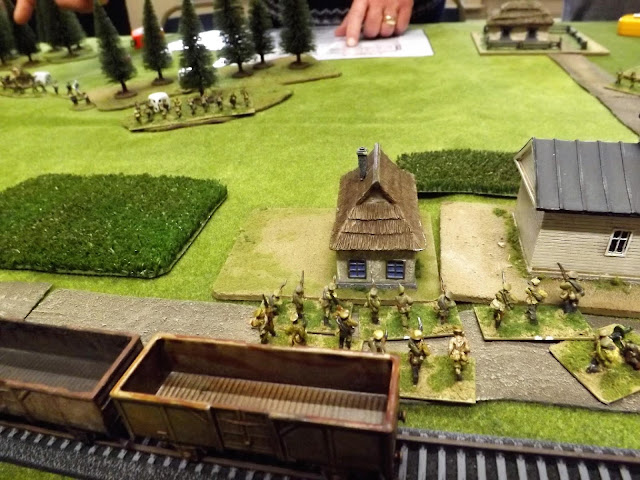 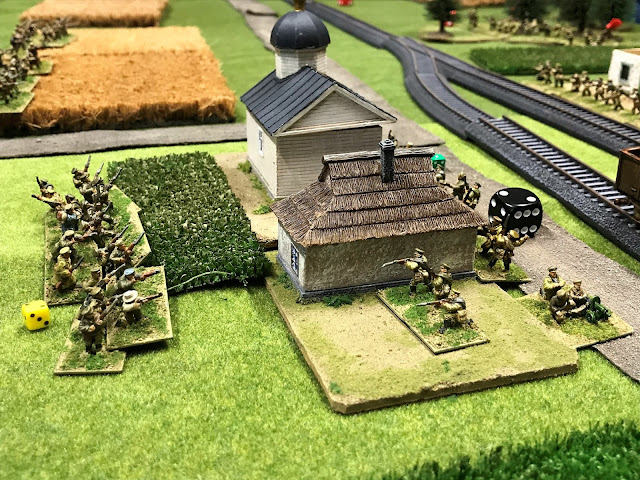 Back on the Whites’ right, a second flanking attempt by the Colour infantry was forced back by the threat of the Red cavalrymen. This cost the Reds a platoon but held the flank for now. However, after several turns of duelling, the FT eventually got the better of the Red FG. 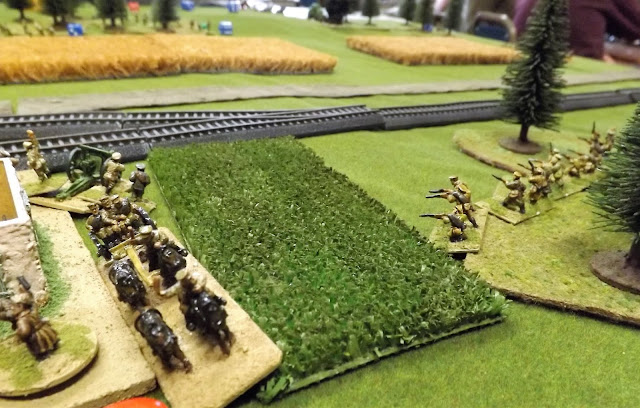 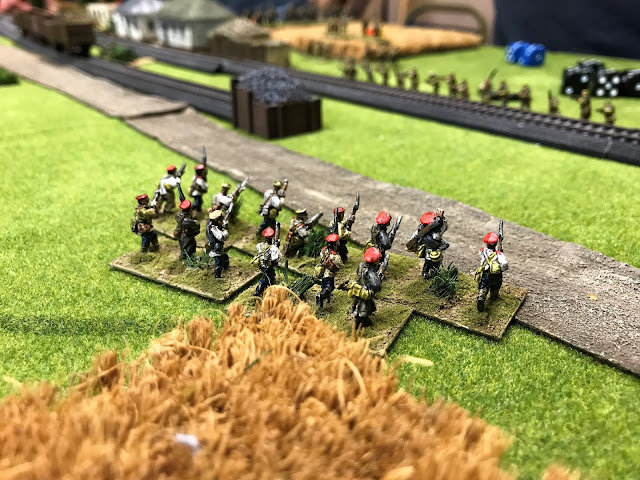 About the same time, a White volunteer company finally gained a foothold in the church, forcing back the Red company. The Reds had a very nicely placed MG behind the church, which had very effectively enfiladed the Whites flanking movements for several turns, whilst being out of sight of the Whites fire support. The loss of the church made its position untenable, unlocking the right flank for the Whites. 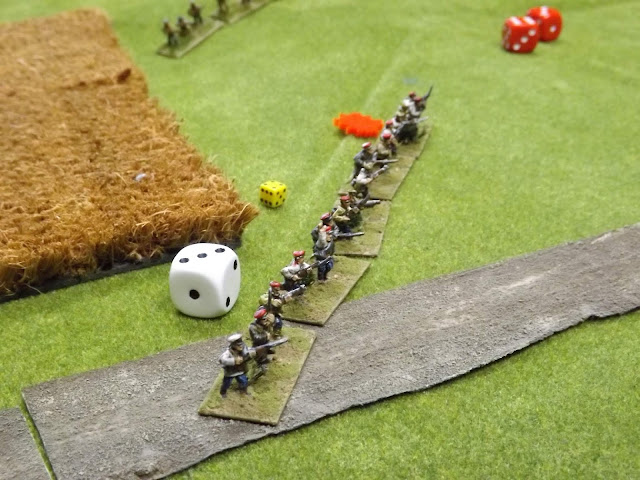 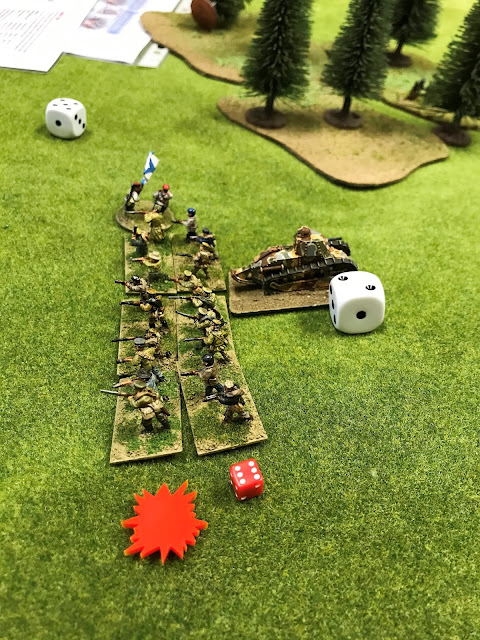 The Whites were now massing in the centre and having knocked out both Red FGs, had a decisive advantage. The Reds we’re slowly getting prised out of their positions, left and right. 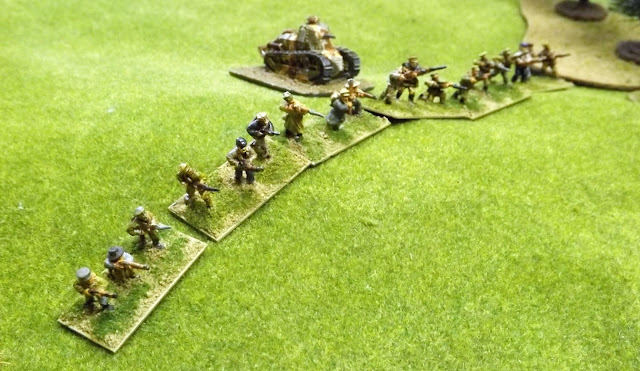 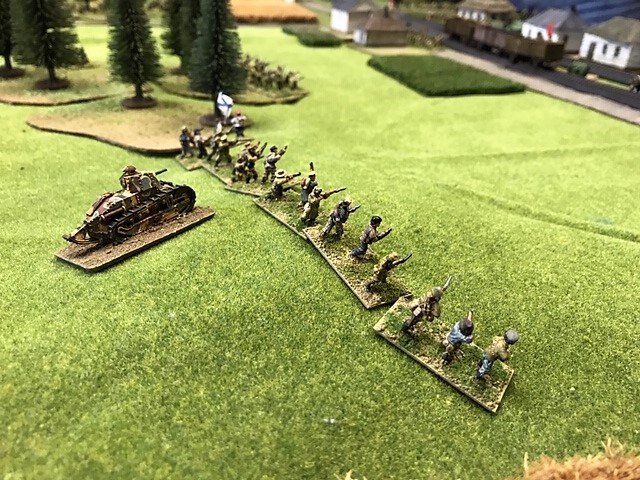 Having played for four hours, we called it at that point. All the players enjoyed the rules, even if I made a few mistakes in application. As a first game with the rules it worked well, players running their sides of the table with minimal refereeing. The rules are pretty simple but have considerable character. I really like the similarity in basic principles with John Bull which makes switching period much easier with minimal relearning of rules. 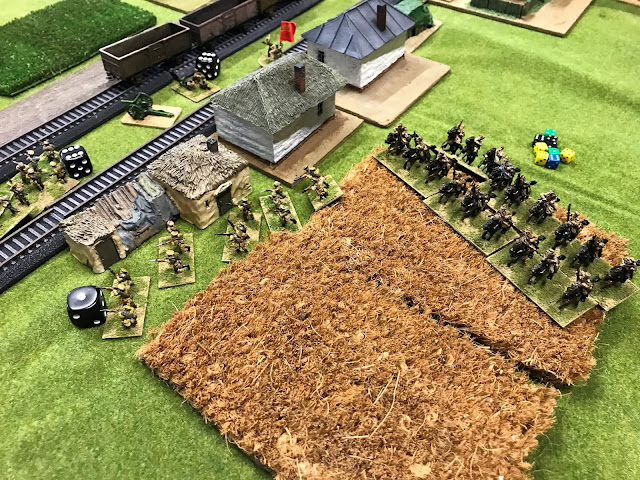 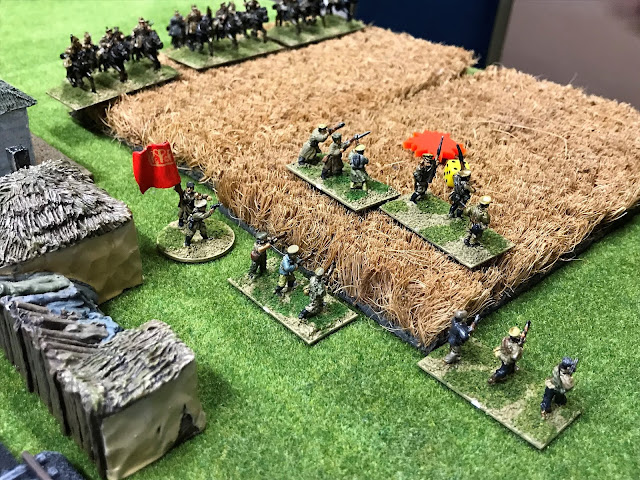 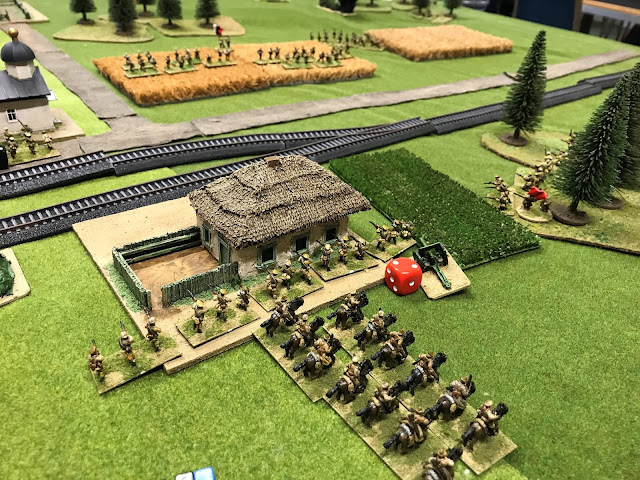 All figures are Peter Pig, buildings are Ironclad miniatures or scratch built and rolling stock by Siku toys. Railway from Battlefront/Gale Force 9. Great to see the toys on the table, it’s given me the enthusiasm to paint my Red sailors, Cossacks and Tachankas. Hopefully more to follow before too long.