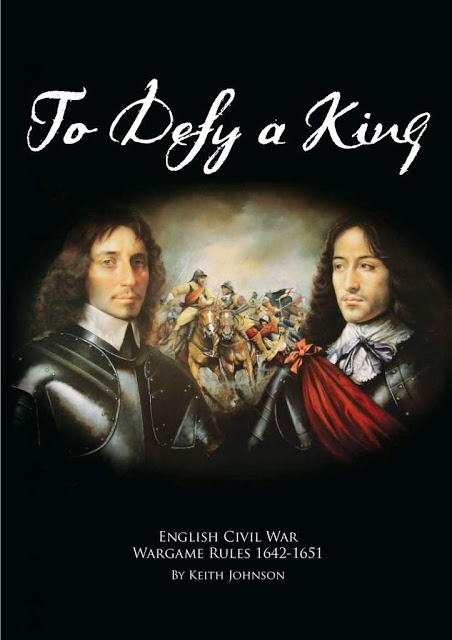 Rules used: To Defy a King

Buildings: some Hovels, others too old for me to remember 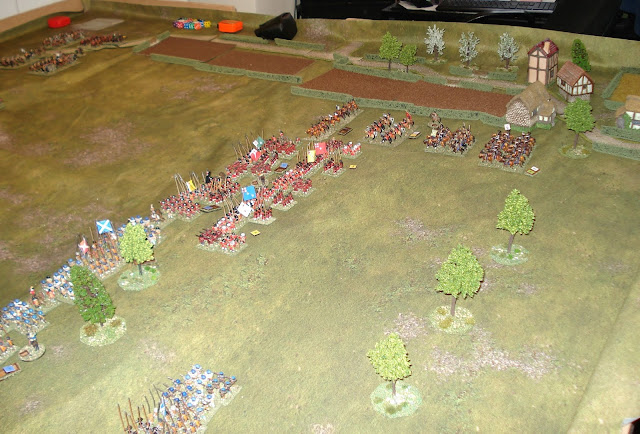 Over the last twelve months I have been slowly building up a 15mm Royalist army to go with my already completed New Model and Scots armies and whilst I am still missing most of the cavalry I felt that there was enough available to run a game. With the use of Mr Land’s 8x5 home table I could do what we all like to do and that is to get the whole lot out and then play for a day. 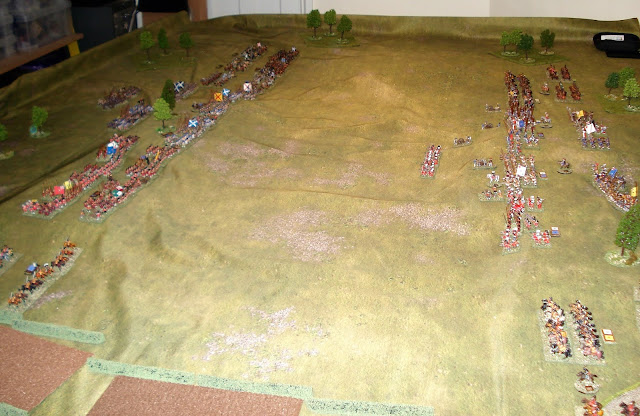 Now as this was an ECW battle the course of the fight went like this; the infantry marched forwards, fired at each other for a while and then meleed for the rest of the day, meanwhile out on the flanks the cavalry fought each other until one side was victorious, chased away their opponents and then turned in on the infantry. Right that’s the AAR done so this report will be more picture heavy than normal with a few comments on the rules used and if they worked for such a big battle. 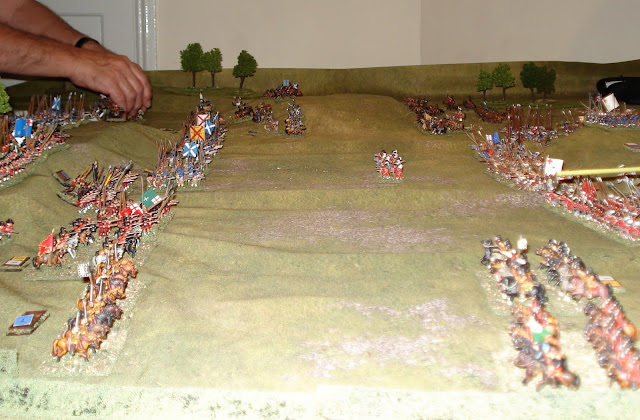 Although the above is a bit stereotypical, it was what I wanted to try and achieve, I don’t want to see musketeers machine gunning down their opponents and the infantry should slug it out for most of the day. Also with the cavalry I want to try and get a situation where there are waves or lines of conflict, the possibility should exist where one side might break quickly but mainly I wanted a to see a bit of too and fro until one side gets the upper hand. 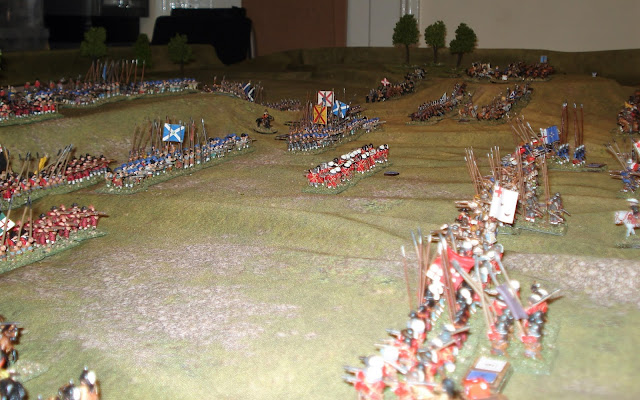 Perhaps you need the bigger type of battle to achieve this as you will have the extra figures available but then again with smaller forces you should still be able to achieve something similar but more quickly due to the lack of reserves. 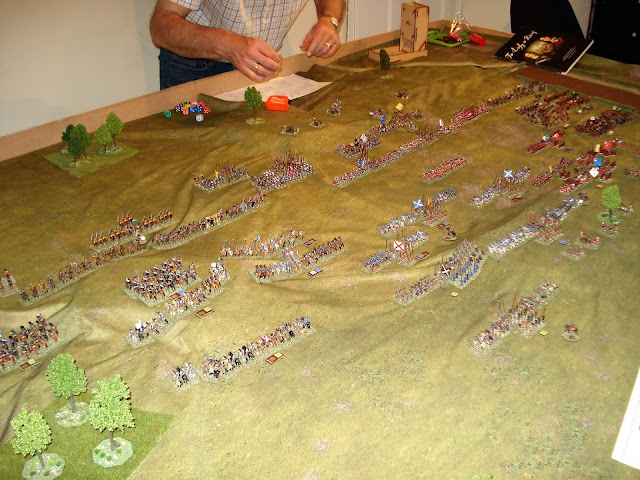 To Defy a King is one of those rule sets that never caught on and has disappeared into the wargames cupboard along with so many others that we buy, I still use them for ECW as I like many aspects of the rules especially the army creation section. The rules are written mainly for around 10-12 units per side sprinkled with a bit of period flavour but I didn’t see any reason why it couldn’t be used for 40 units a-side with a bit of pruning. 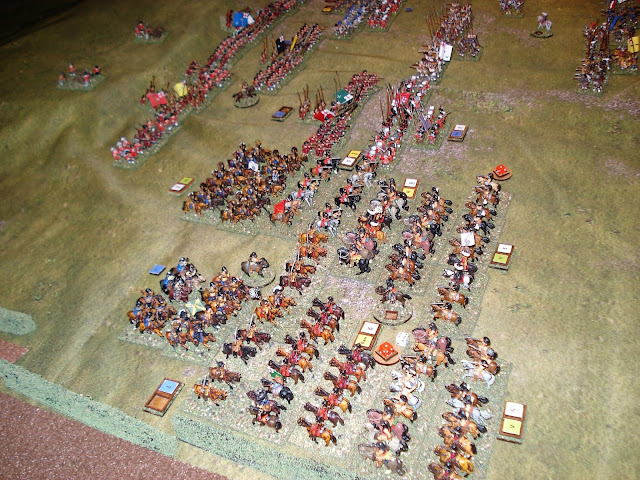 So out went giving orders to brigades and then sending messengers to change them which does normally work quite well and I also decided not to bother with any unit specifics like Ironsides or Brave etc, I just kept in the three quality levels and the different troop types. 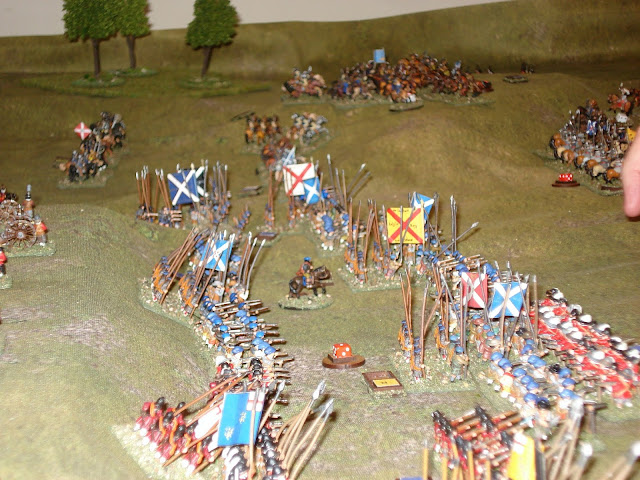 Beforehand I had made up some small chits to help identify the various quality levels and I distributed equal quantities of each type to both sides sufficient for their forces, I did however give the Scots/New Model a couple more Raw chits in their mix as they had more units and to reflect the Scots lower quality and the Royalists had two more Veterans in their set. Then they randomly drew a chit and placed it against a unit. After that was completed I allowed both sides to swap any three chits around amongst their armies. 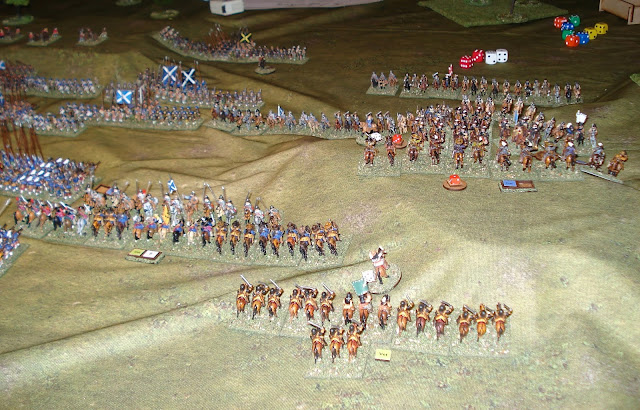 These rules I find give me the period flavour I am looking for by how it handles combat. Melee and shooting work the same so I will roll it all into one explanation; you fight or fire per stand and need to score 8 on two dice with a few pluses or minuses. Using pairs of differently coloured dice really helps so that you can then throw them all in one go, the number of hits thus obtained is your chance of inflicting a stand casualty so you are not likely to inflict more than one at a time, the number of hits achieved must then be converted into a kill, 6 hits will remove a stand so anything under or over that will then need a single dice throw equal or under to the number of remaining hits in order to convert.

Quite frequently the players only managed to get one or two hits needing them therefore to throw a one or a two to take off a stand. For example at the start of the game I allowed a three turn artillery bombardment, both sides had six or seven guns with each gun having two shots per model, the total number of hits I think was five and then only two kills were achieved, sounds like a terrible game. 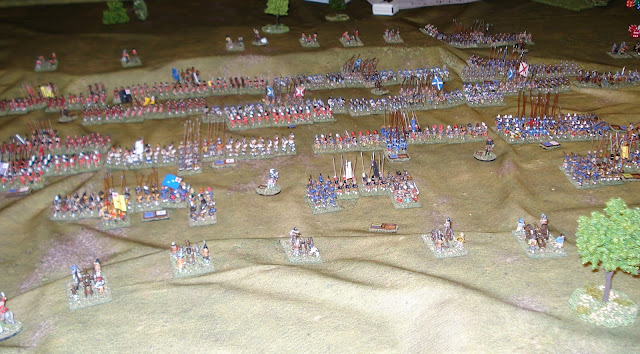 In fact they loved it, casualties amongst the infantry did slowly accumulate over the battle and fresh units had to be fed into the fight, in comparison cavalry losses on the other hand were a lot heavier. The players decided after a while to stop trying to shoot the enemy away and instead get down to push of pike all along the line. 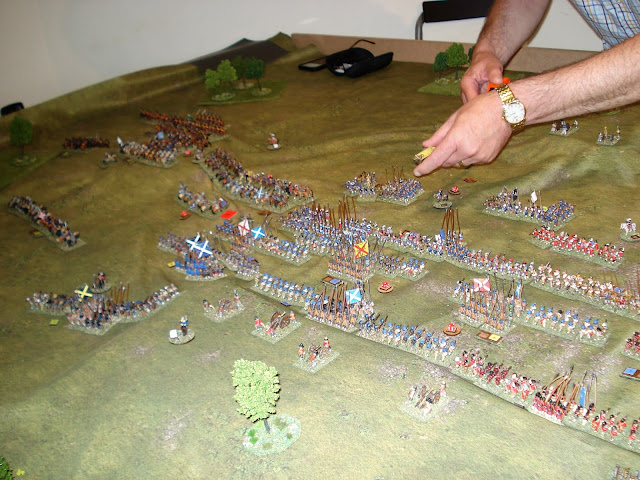 In melee along with the occasional stand removal you will also be pushed back a number of inches equal to the difference in the damage caused (not kills) and you can only go back so many total inches before breaking or routing (infantry and cavalry do different things), this distance will depend on your quality level. See it more like losing the will to continue fighting rather than unit losses if the lack of dead bodies worries you. The players would see a unit on its final inch just win the next round and regain some ground as the fighting flowed backwards and forwards. 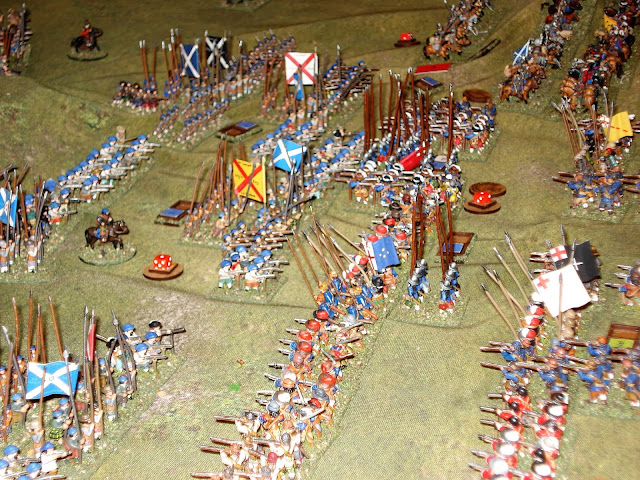 The cavalry units being smaller were more prone to being destroyed but also had less possibilities to cause casualties due to their lack of stands, getting that one or two kill possibility conversion was important but I noticed that the push and pull of the melees was attracting their attention far more than taking off a stand of figures as it was key to their winning or losing. 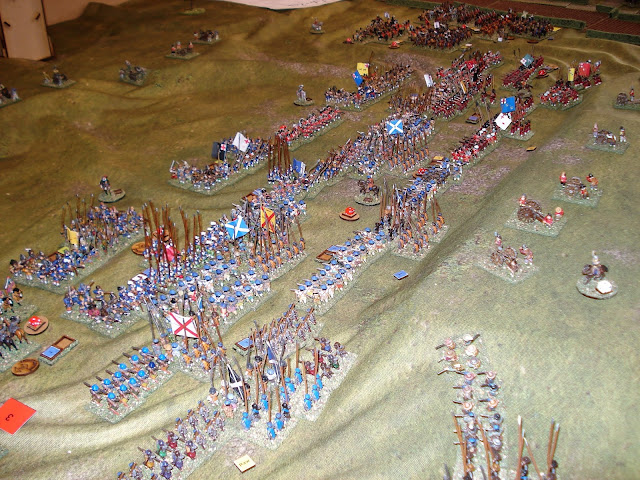 Returning from lunch we found that we had acquired an additional player.

In the end I think I achieved more or less what I wanted, I had a game that the players enjoyed and with the right period flavour to my way of thinking. 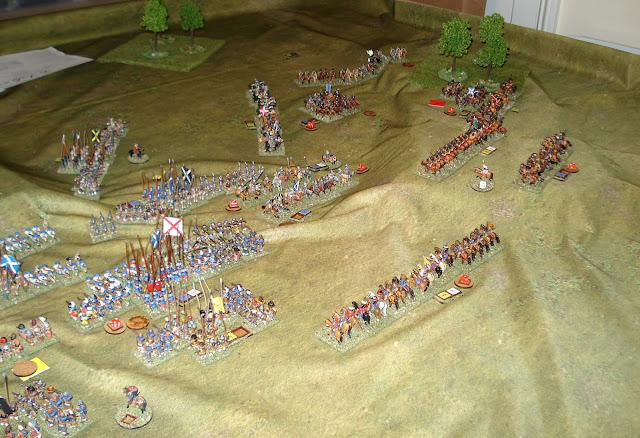 For the record the Royalist right wing cavalry struggled to break through in what was a large swirling cavalry melee but definitely had the upper hand with some of the back line Parliamentarian infantry having to be moved out to help block the pending break through. On the left where there were smaller forces, the Parliamentarians had broken the majority of the Royalists facing them and were heading back towards the centre. 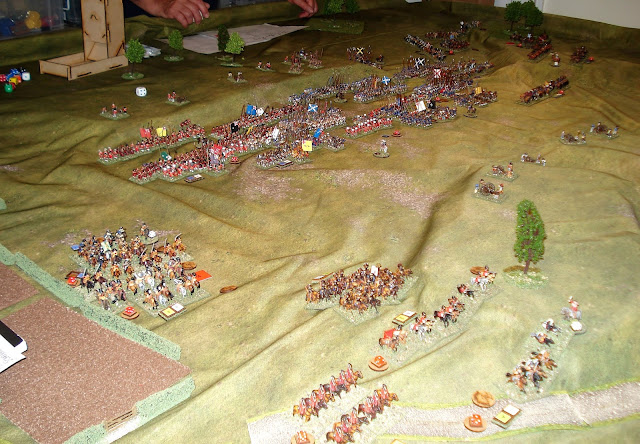 Here the infantry battle was going the way of the Royalists who despite their lack of numbers had pushed the Parliamentarian/Scottish line back to the bottom of the hill. 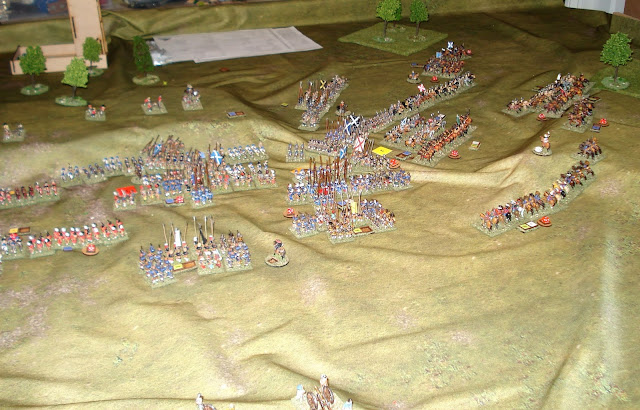 Of course this is not an evening type of game but no game this size would be and I will definitely play the smaller version using the army generator again, maybe with all or some of the rules in play or maybe not. 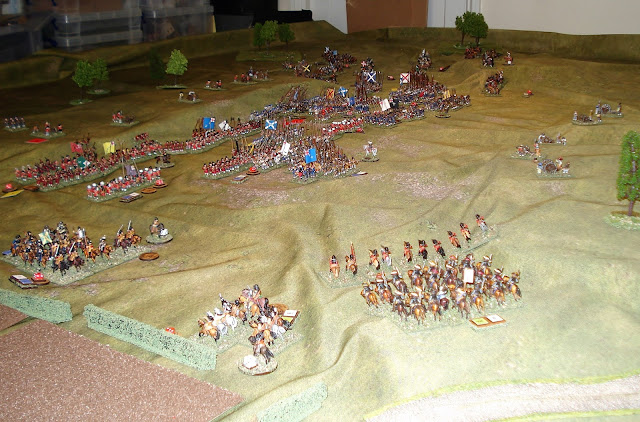 Now that the Royalist cavalry is almost up to strength and I have made some nice little holders for the chits to sit in, I wonder if it would work with fifty units per side.

This has been a Mr Steve production.