It's Maida, JJ, But Not As We Know It 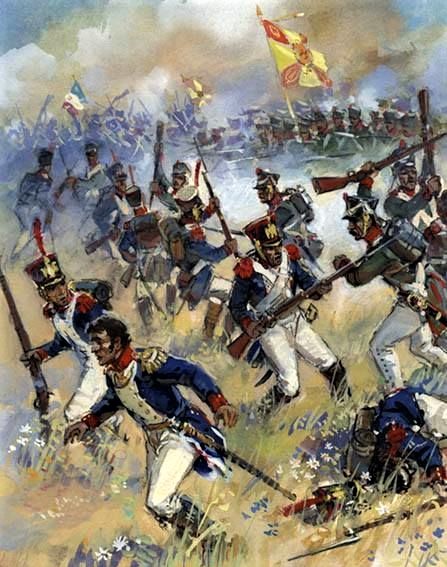 OK. Let’s come clean straight away. When I offered to put on a game at the club based on the battle of Maida with Russian and French forces fighting in the snow, there was much raising of eyebrows and scrabbling for laptops. DWG puts on historical wargames, and, apart from the odd Nazgul flying across the table at Christmas time, historical wargames is what DWG play. So, Maida, fought under the scorching Italian sun between British and French, being played on a frozen waste between Russian and French forces. Hmm.
The thing is, I have been building up both a French and a Russian Division and I had an excellent, spanking new Tiny Wargames snow mat and I wanted to play with my new toys. I was also introducing the club to my set of Wargames rules, and I knew that Maida was the perfect scenario for this, being essentially an infantry engagement of approximately Divisional size. 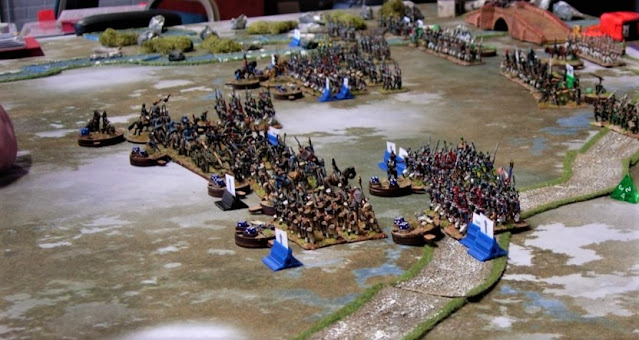 The Battle of Maida was fought on 4th July 1806 and is popularly (and erroneously) seen as the first time that the fire power of the two deep British line overwhelmed an attacking French column, but let’s not go down that particular rabbit hole. It was a welcome victory after the humiliation of Ulm and crushing defeat at Austerlitz and showed that a French army could be defeated. Maida Vale owes its name to the battle, there apparently being a pub called The Maida or The Hero of Maida in reference to Sir John Stuart (later Count of Maida) who led the British troops.
The British force landed on the Italian coast and force marched to attack the French camp at Maida. Stuart’s force, numbering some 5,000 men, was made up of 11 battalions, (two of which, the 78th and the 81st were untested) and 8 guns. Regnier, the French commander, was notified of the British landing and with a slightly larger force of 8 Battalions, 4 squadrons of cavalry and 4 guns, left his well-fortified position to confront Stuart’s force. Confident of victory and eager to avenge his defeat in Egypt five years earlier, Regnier immediately ordered an attack on the outnumbered British force. 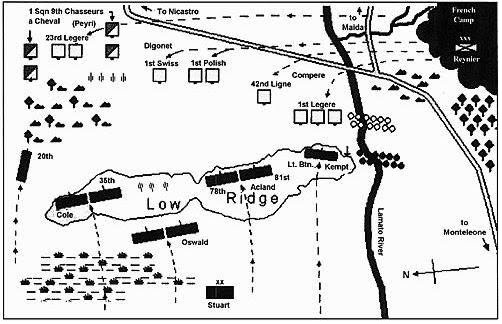 The players were given the following briefing and map.
Russian Intelligence reports that a French force of Divisional strength is crossing the river to the east with the intention of mounting an attack on the Russian Supply Depot. A Russian Division under Count Mikhail Fedotovich Kamensky, is ordered to leave at first light to attack the French before they can establish a foothold.
The French Division under Marshal Jean Lannes, 1st Duke of Montebello, Prince of Siewierz, has crossed further South and has force marched through the night with the intention of mounting a surprise attack on the Russian Supply Depot at Dawn .
First light finds Count Mikhail Fedotovich Kamensky’s forces strung out in March Column leaving the depot, with the French bearing down on their right flank.
TERRAIN
Snow areas and forest - Broken Terrain
Area of ground to West of River - Broken Ground only passable in Skirmish Formation
River - Broken Ground only passable in Skirmish Formation
The map was flipped East to West and the Low Ridge was ignored. It doesn’t feature in any accounts of the battle so even if it did exist it was of no tactical importance The Russian forces under Kamensky were based on the French order of battle with Light infantry units on both their flanks. Davydov’s brigade consisted of two raw militia battalions in place of the Swiss and Poles in the French Order of battle. Neither regiment covered themselves in glory on the day. Would the militia share the same fate? Raevsky’s Brigade was beefed up to make the French worry about their Line of Communication, but the flip side was that the units of his Brigade would be harder to keep in Command.
In addition, all the Infantry were classed as stubborn which meant, although they were regular or raw and wouldn’t fire or fight particularly well, they would be harder to break. 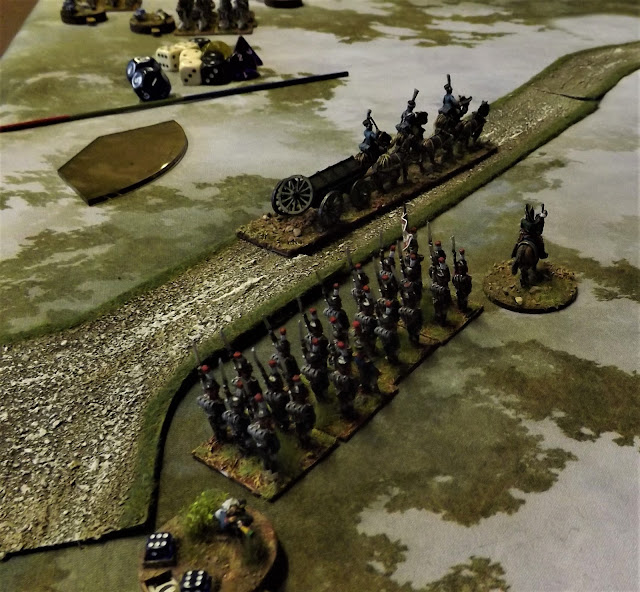 So that left Stuart’s forces to be represented on the tabletop by the French forces of Lannes. Sacre Bleu!
I reduced the number of brigade commanders for the French force because I wanted them to have to think about command and control. Each Brigade officer has a command control of 150mm - any unit outside that range can’t do much except defend itself. To the Russian commander and Brigade officers, command and control was a constant headache because with a command range of 300mm for the Russian commander, it was impossible for him to be in control of all his forces all the time, relying on his Brigade commander’s initiative, which wasn’t great. 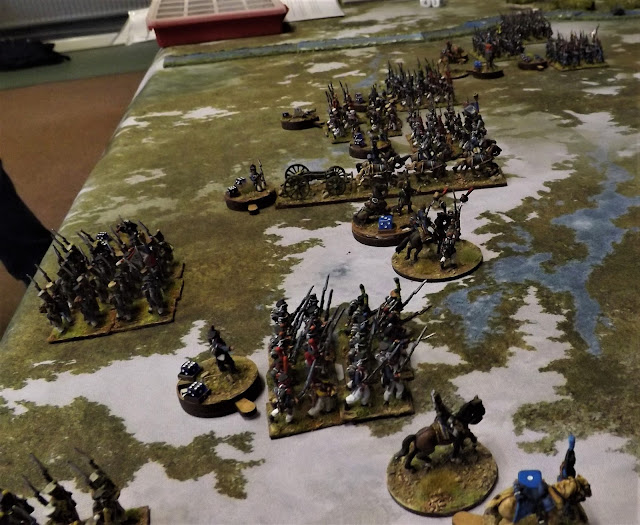 So what happened? Is it just me, or do all scenario designers worry that the game will last two turns? Would using Average Dice make the results too predictable? Would the Command-and-Control mechanic prove too restrictive? Would having casualty disc markers to show fatigue and strength casualties be too fiddly? Would the game just clunk along? 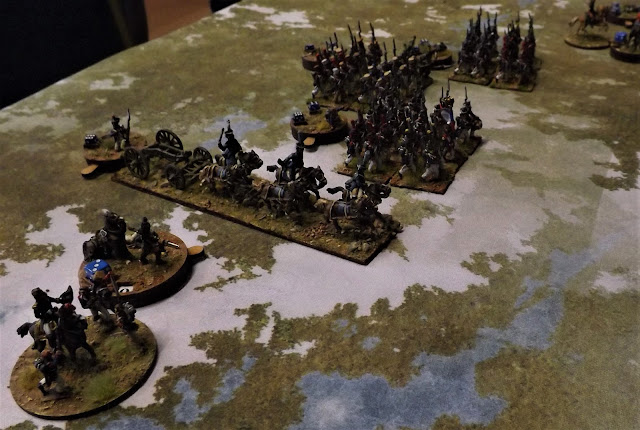 Raevsky on the Russian left immediately had command and control problems and had his work cut out to get his forces moving through the wooded terrain. Tuchkov and Davydov’s Brigade formed a defensive line and awaited the onslaught as both Maransi and Veillande advanced confidently with no command-and-control problems. The first shock was the loss of 2/17 legére who were caught in Skirmish formation and ridden down by the Izyum Hussars. Maransi quickly recovered his composure and closed to musket range, starting to wear down the Russian line with his superior fire discipline. Tuchkov’s Brigade, although getting the worst of it, refused to break initially, but eventually, the fire came too hot for the 1/19 Jägers, who routed leaving an inviting gap for Maransi to exploit. 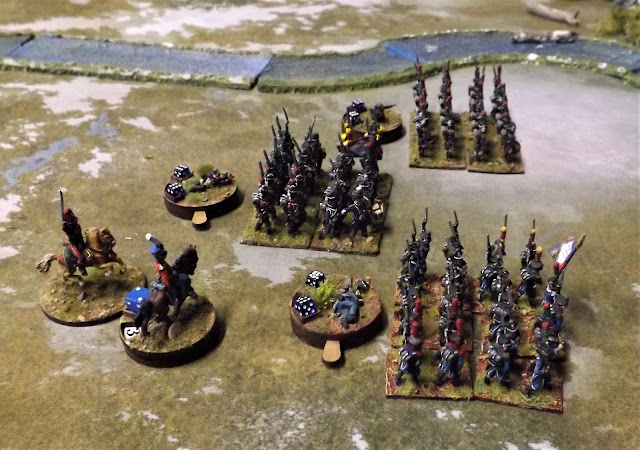 Veilande did away with the niceties of a fire fight and ordered his battalions to charge unloaded. As the Russian Battalions confronting him were the two raw St Petersberg Militia Battalions, he expected to make short work of them. Filled with confidence, the 3/64 ligne and 1/34 ligne, passed their moral with ease and advanced to contact. They were stopped in their tracks by a crashing volley – from the raw Militia Battalions. Some unerringly high dice rolling, (06.18% chance – one tends to take note of these things when freakish results pop up) together with the presence of the charismatic and inspirational Davydov, ensured the Militia inflicted eyewatering casualties which routed one battalion and caused the other to stop and deliver a ragged volley, only to remind their officers that they had been ordered to charge unloaded. Had the Militia been allowed within the rules to volley and charge as the British did, (there’s that rabbit hole again) that would have been the end of the matter. 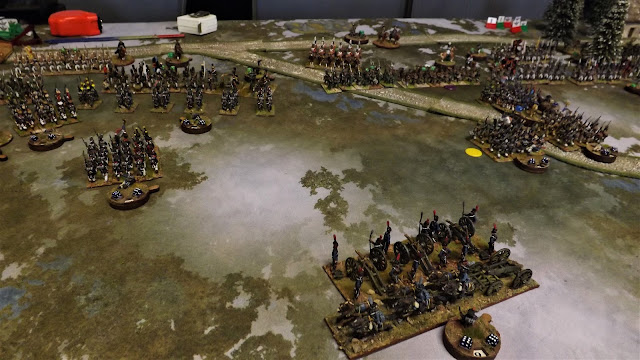 It was now Lannes who was wrestling with command and control. Should he attempt to rally the 3/64 Ligne to stop his Army moral from plummeting? Doing so would potentially leave both his Brigade Commanders out of command. He decided to attach to the 3/64. Heartened by his presence, the battalion rallied. Maransi passed his initiative, and his Brigade continued to press the Russian right flank, getting close up and personal. With Veilande still in command and reserves in hand, the remaining two battalions of his Brigade charged the St Petersberg Militia, but this time with loaded weapons. Both battalions, the 1/40 ligne and the 1/100 ligne, were untried. Would they emulate their counter parts in the real battle, the 78th and the 81st, who behaved as seasoned soldiers on the day. 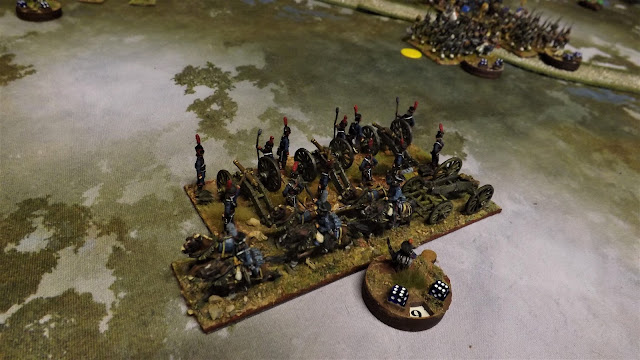 Alas, no. The 1/40 ligne turned out to be raw and the 1/100 regular. Nevertheless, with the encouragement of Veilande, they charged forward, to be halted once again by a steady volley from the Militia. The 1/40 returned a ragged volley which did little to harm the Militia. Davydov’s ADC begged his commander not to expose himself to so much danger, to which he replied in defiant mood,
“You seem unusually afraid of dying today.”
A shot rang out, and he fell lifeless from the saddle. One shot, one dead General. 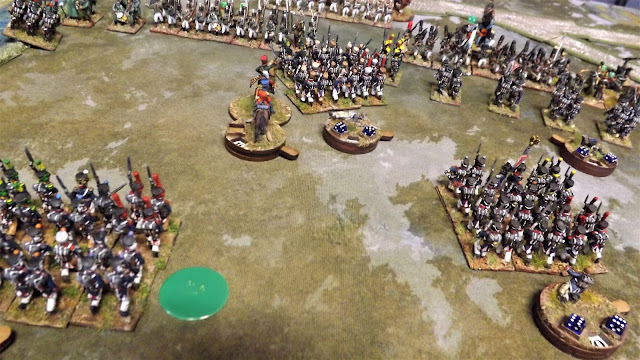 Despite his loss, the Militia held their ground, routing the 1/100 ligne and capturing Veilande, who had his horse shot from under him. It was at this point that Raevsky Brigade emerged from the woods on Veilande’s right flank. The game was up. Despite the hole in Tuchkov’s line on the Russian’s right flank, Lannes conceded defeat. With his line of communication threatened and both Brigades in a sorry state, he recognised the pointlessness of carrying on the fight. 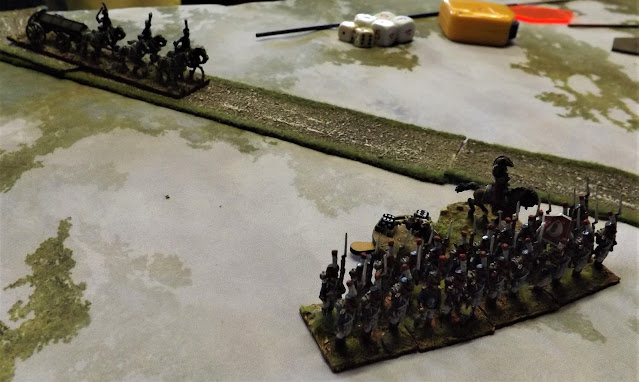 Well, it lasted for longer than two turns and we got a result; the Average Dice produced remarkably above and (for the French) below average; Raevsky’s Brigade arrived just in time to deliver the coup de grace. However, skirmishers need to be handled differently in the rules. Losing a whole battalion of light infantry near the start of the game shouldn’t have happened as it did. They should have a least been given a chance to evade and fall back on their supports. When the rules were conceived some thirty plus years ago, skirmishers were treated more as gun slingers who roamed freely over the board, throwing dice, and saying ‘Bang, your dead’, which was fine for single figure skirmishers but battalions in skirmish order need to be handled differently. 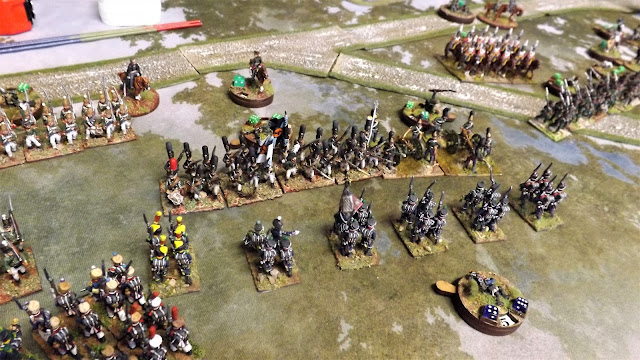 Our game did in a rather bizarre fashion, mirror (sometimes quite literally) some of the events of the real battle. Two of the French regiments, 1st Swiss Regt. and the 1st Polish Regt. behaved badly and broke. These two regiments were represented in our game by the two Militia Battalions, and we know what happened there. 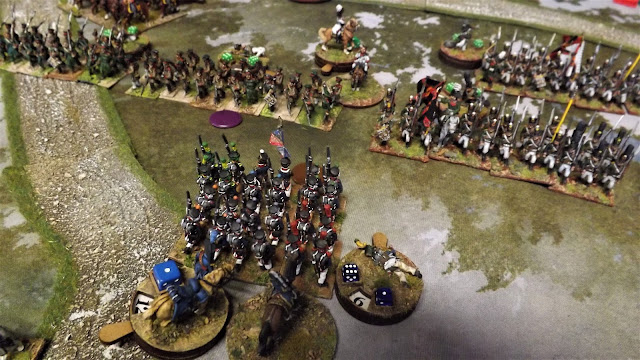 The British force had two untried battalions, the 78th and the 81st. They fought well in the battle, unlike their French counter parts in our game. The similarity of the impetuous, overconfident French advance being stopped in its tracks by well-directed musketry was striking. 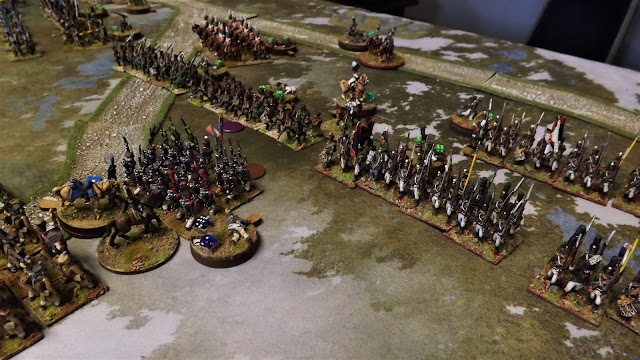 For those of you who would like to know more about this battle, I recommend Richard Hopton’s book The Battle of Maida 1806 Fifteen Minutes of Glory. 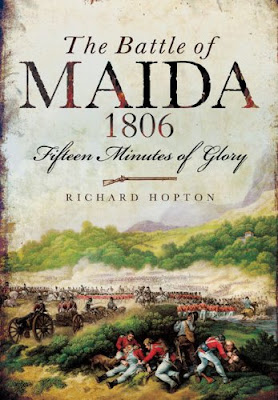 My thanks to Mike (I throw high Average Dice), Si (I throw low Average Dice), Steve L (who could see the wood for the trees) and especially Nathan, who didn’t throw his toys out of the pram when his light battalion was ridden down by the rules, rather than the Izyum Hussars. All four made my life very easy with their patience and enthusiasm. 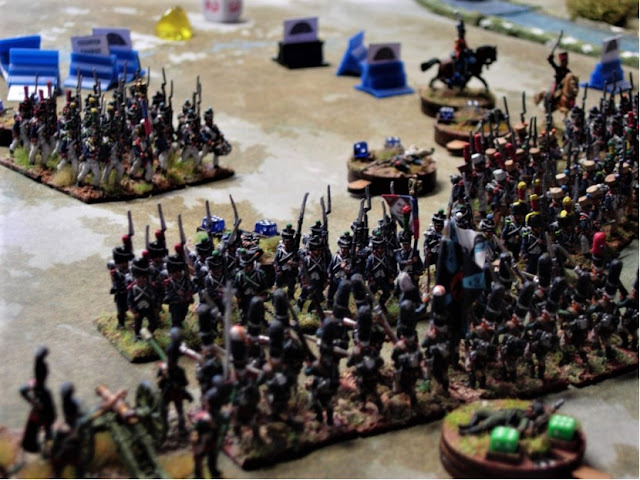 It is a great strength of the club that everyone is there just to enjoy playing and to have a good time and to make sure that everyone else has a good time. Having said that, I’m not sure if the chairman will let me off the hook for running such a dubiously historical game.
To misquote a misattributed quote. It’s Maida, JJ, but not as we know it.
Figures: AB, Museum Miniatures, Xan
Russian Command figures: Boki
Terrain: Fat Franks, Tiny Wargames.
Posted by carojon at 09:40