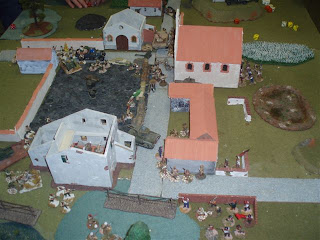 The Republicans try and early attack on the square 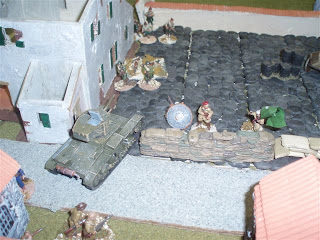 Things that can ruin your day 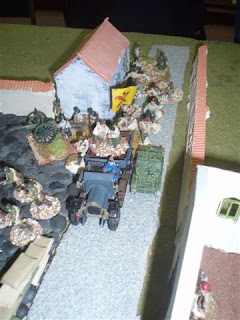 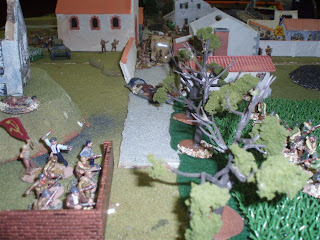 You Cross the Road. No, after you !

This month Chas put on a SCW battle in 28mm. Steve M & me played the brave revolutionaries and Andy & Malcolm were the oppressive communist government.
The scenario revolved around government attempts to take the town of Sesena. A unit of Moroccans were caught resting in the town square and victory was deemed to go to whoever occupied the square a close of play.
The Republicans attacked with regulars supported by 3 x T 26's. This caused some alarm to my Moroccans, as they lacked any distance effect weapons that could damage tanks. The Moroccans duly spread out, manning the barricades and occupying the houses around the square.
A field gun and tow turned up in support and the gun deployed covering the square. The tow truck was used to block one of the roads into town.
A desperate fight for the church ensued and Andy launched several attacks on the barricades, only to be beaten back by the Moroccans.
With both sides receiving reinforcements the battle swung to and fro. The government lost the T 26 on the edge of the square, to a round from the field gun, but the gun crew then withdrew under mg fire.
Given the short ranges, crossing open ground was very costly and a stand off on the approach roads developed.
On our right Steve and Malcolm shot at each other from cover. Even the "Chip Van" could not be persuaded to turn the corner under fire from Steve's Legionnaire's, Civil Guard and Moroccans.
On our left, mg fire from the hill meant the Legion and Carlists could not leave the wood. Equally the POUM militia facing them dare not leave cover.
In a desperate assault Andy took the factory on the left of the square, only to be wiped out by counterattacking Legionaries (who died to a man in the process !).
As darkness fell 3 Moroccans still manned the barricades and a mass of Phalangists moved down the road to reinforce them.
A good game, played in a good spirit to "Rate of Fire" rules.
A little more aggressive use of the tanks and Chip Van might have swung the game. If we had lost the square, then the deadly cross fire from the buildings and barricades would have made retaking it very difficult.
Vince
P.S thanks to JJ for the photos.
Posted by Snoop at 10:05