This was a game I had been looking forward to playing when painting my collection of British Infantry and Waffen SS Panzer Grenadiers. The campaign was written by Gary Martin and is available on the Battlefront Website, from which you can find the orders of battle. Mission 1 represents the "Break In" attacks launched on the 26th June 1944 by the 15th Scottish Division and the particular attack by the 6th Royal Scots Fusiliers as they fought to take the village of St Manvieu. The village was held by 2 Kompanie, 26 SS Panzergrenadier Regiment and the command post of the first battalion. 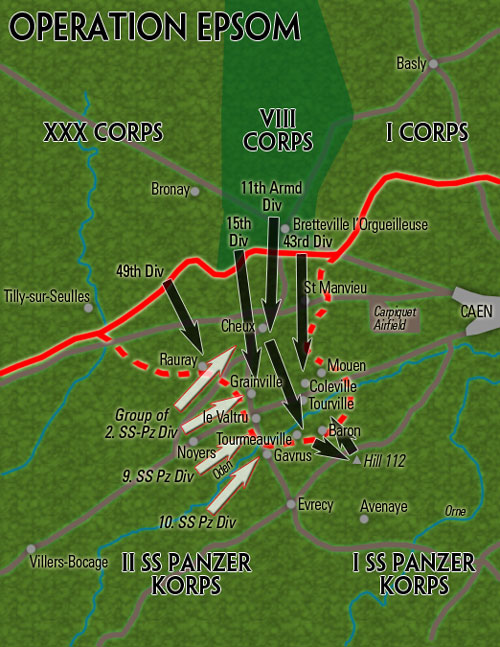 The SS troops had been in almost continual action since June 7th, when they had counterattacked the beachhead established by the Canadian 3rd Infantry Division. By the time the Scott's attack took place the 12th SS Division was firmly on the defensive and had started to harden their defences with prepared positions. 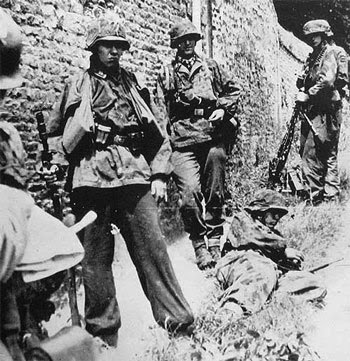 This was the Scots initiation to battle after years of training in the UK. Although they were untried, they were confident and well trained in their assault tactics of "leaning in" to their supporting artillery barrage, backed up by Infantry tanks to shoot them on to the objective.
The day would prove how well that confidence was founded.

The map for the game as per Gary Martin's briefing 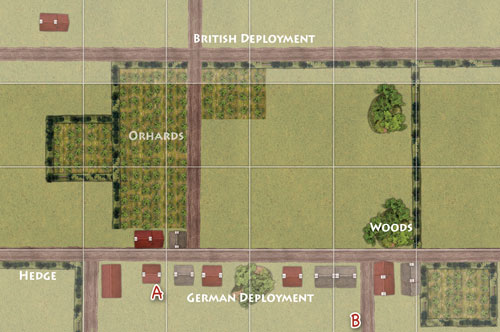 The table top interpretation. I decided to make some slight changes replacing some of the light woods with cornfields which were a major feature of the terrain and captured in so many photos of the battle of "Tommies" advancing with rifles at the port in waist high corn. 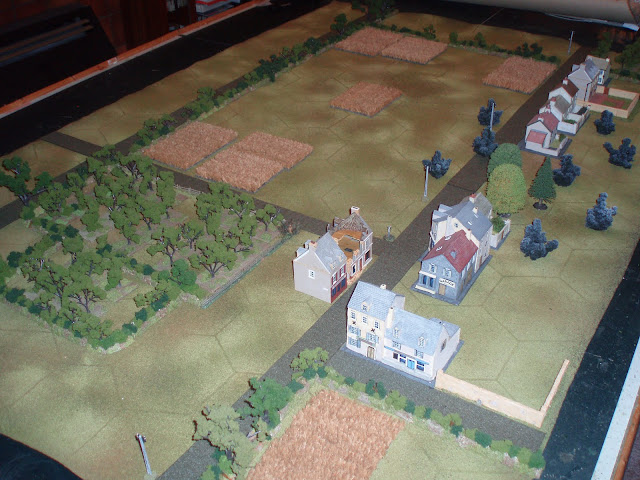 I also decided to change the original game design by allowing the Scots to be preceded by their rolling barrage provided by the Divisional and Corps artillery batteries. This caused the loss of three SS foot groups and a dug in PaK40. 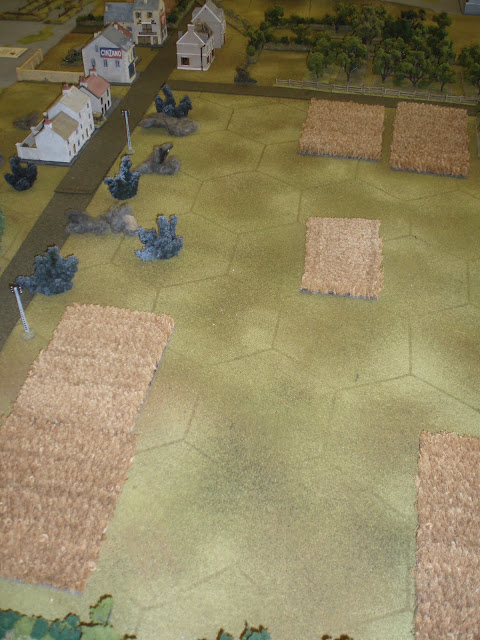 Both sides placed an objective in the German set up area, and not unsurprisingly they were well separated to confuse the Germans as to where the attack would concentrate. 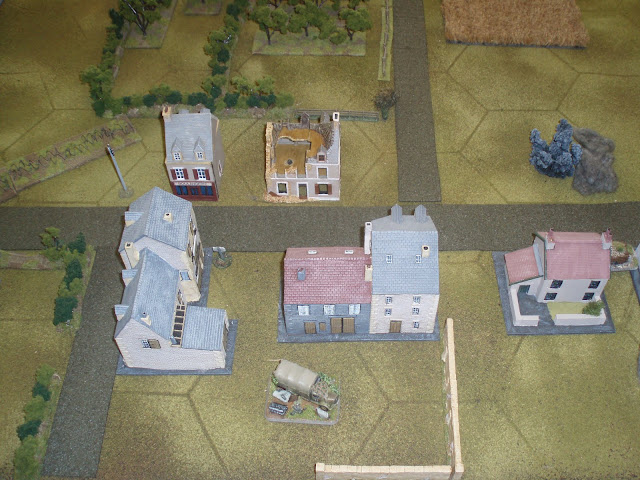 The Scots advanced rapidly into the orchards on their right flank and approached the edges of the village, while the SS were busy trying to unpin from the artillery barrage. 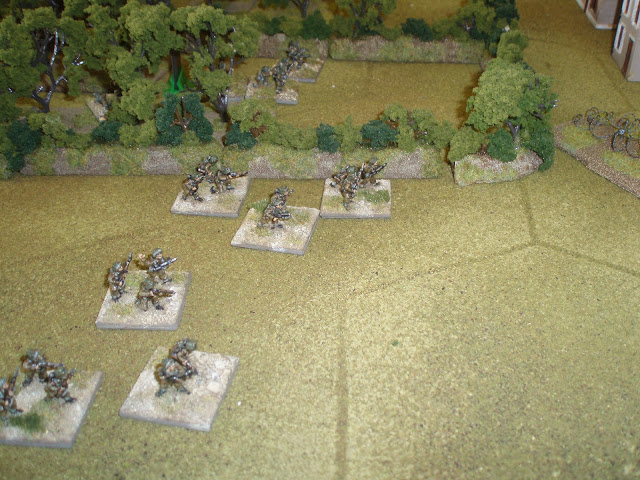 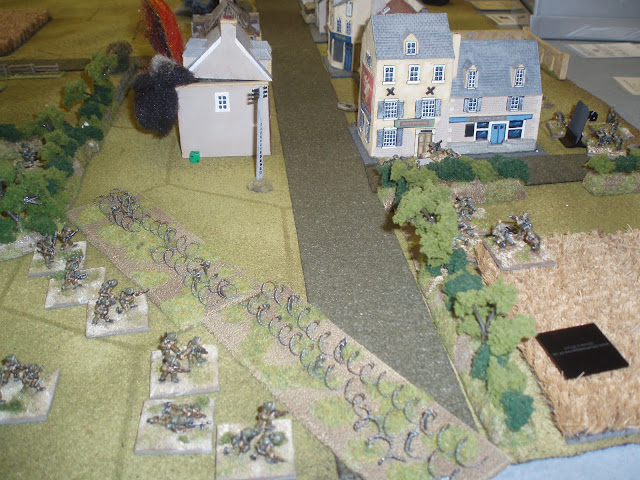 The Scots came up against the German wire and stopped to work on breaching it whilst exchanging desultory shooting into the village. The marker on the right indicates potential SS ambushers. 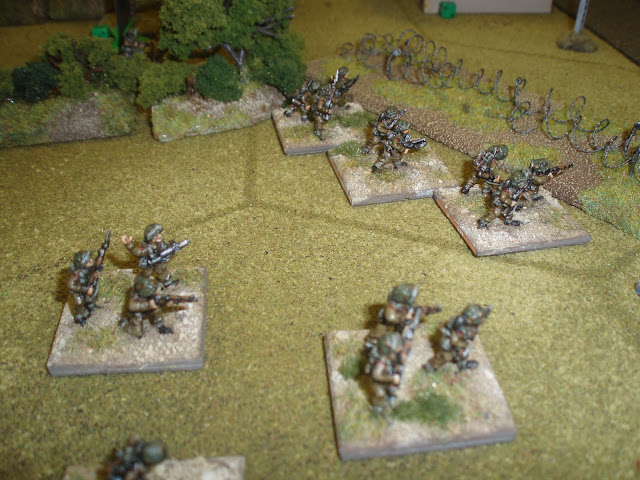 It started to become clear that this was the main assault as the lead platoon supported by Pioneers was quickly followed by two more rifle platoons, backed up by the crocodiles. 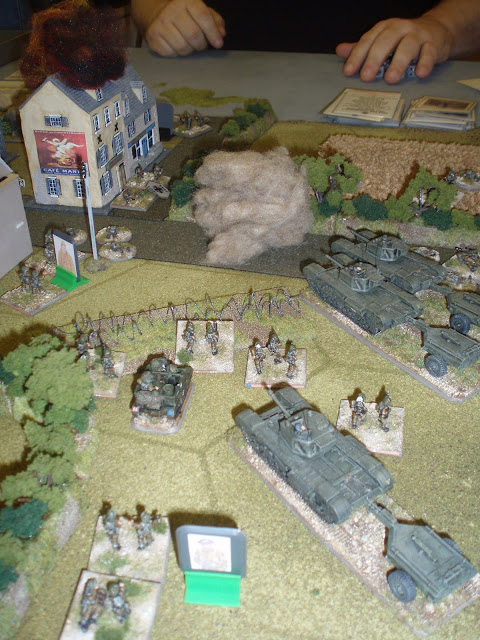 The Pioneers joined in by starting to flame the outlying houses and infiltrated into the outskirts. 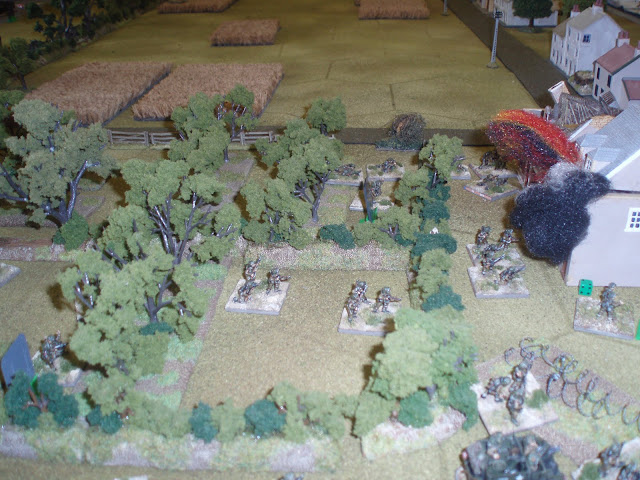 Whilst the attack was going in on the British right, the HMG carriers in the centre were supporting with indirect fire into the village. This prompted retaliatory fire from the SS mortars which caused damage to several carriers. 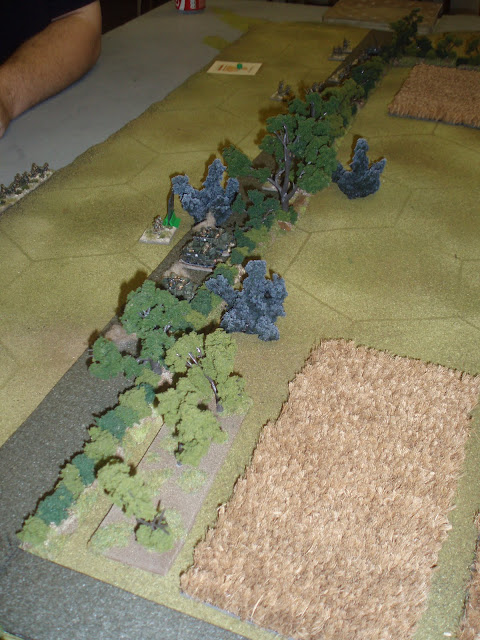 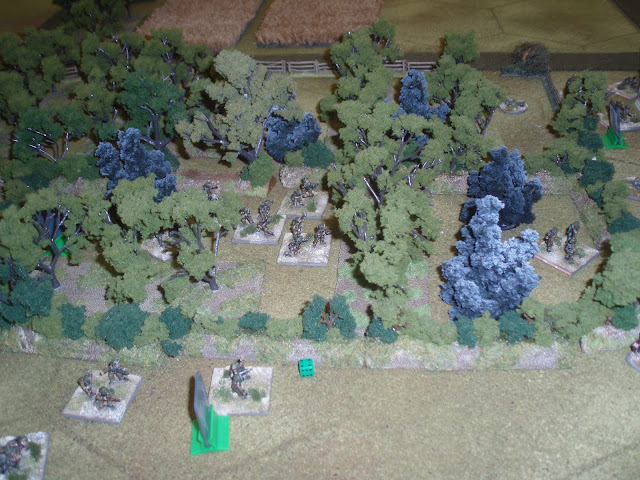 Then the SS nebelwerfers joined in dropping a barrage into the orchards knocking out five rifle groups from two platoons and pinning the Scots attack. This also finished off the Pioneer platoon who had led the assault. The damage had been done to the German flank though, and the remains of the SS platoon there were forced out and retired. The other SS platoon started to feed reinforcements across their front to secure the objective, whilst leaving a security section to guard the German right flank. 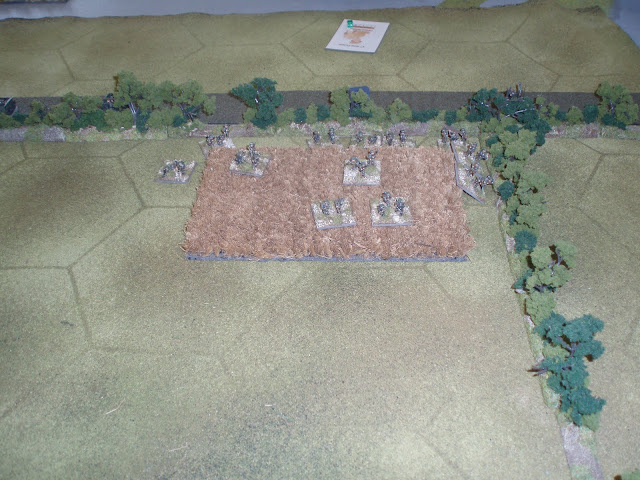 In an effort to stop the German re-alignment, the Scots launched their reserve platoon at the German right, braving MG42s and mortars in the fields beyond.
This was where our game finished, with 8 turns completed and the fighting still very much in full swing. However with slightly under half of the SS company destroyed and only about 25% casualties of the Scots hors de combat, the battle looked to be heading to a historical win for the Brits. However as in the actual action the Scotts had been fought to a evening battle amid the flaming ruins of St Manvieu, where the follow up units of 11th Armoured Division would become embroiled in the mopping up next day. But that's another game!
Thanks to Malc, Jason Nathan and Steve M for fun game with lots of swings of fortune from one side to the other. The best bit was telling Nathan that he only had to avoid getting a 1 on a D12 when taking a morale check for his SS boys. Although I couldn't see the die, his face said it all. Don't take up poker Nathan!!!
Hill 112 next
Jon
Posted by carojon at 07:39