The second game in the mini-campaign from the Skirmish Scenarios book "Heroes of Omaha and Panzer Lehr" was fought this weekend which picks up from the first game where Battlegroup Heintz had held off the US 3rd Armoured Division whilst waiting to be relieved by the 902nd Panzergrenadier Regiment, Panzer Lehr. 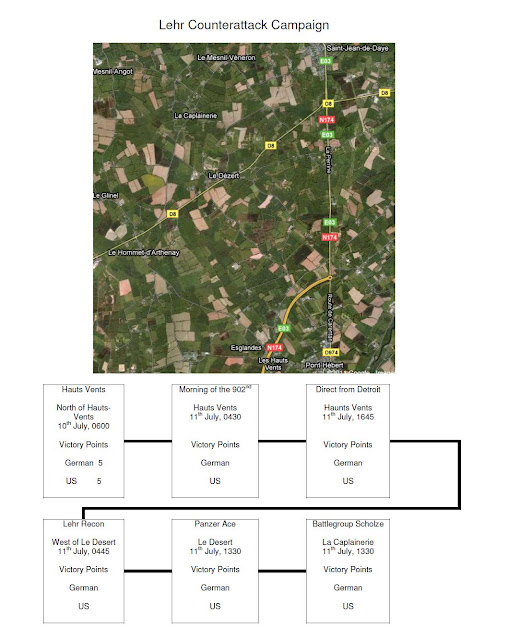 The campaign position is even with both sides gaining five victory points in the first battle. The hill position at Hauts Vents in visible in the lower right corner of the map.
Panzer Lehr arrived at Point 91 in the early hours of the 11th July 1944 and prepared immediate plans to assault the US lines in the hours of darkness to enable their forces to close with the Americans, hoping to take full advantage of the confusion and intermingling of the opposing troops and thus avoiding US air attacks when the daylight came.
Steve, taking the role of Oberstleutnant Welsh, commander of the 902nd Panzergrenadiers, having the option to delay the attack until dawn, followed the historical plan and opted to attack at 0400 hours in the dark.
This decision meant that the action took place at very close range, no more than 240 yards (four hexes) and very often more likely to be at 60 - 120 yards (same to next hex). 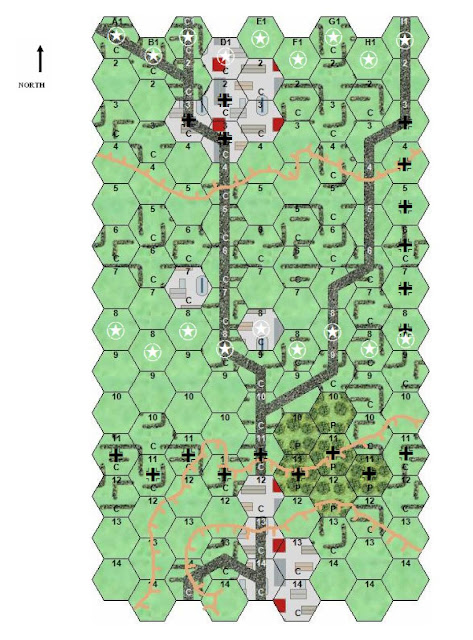 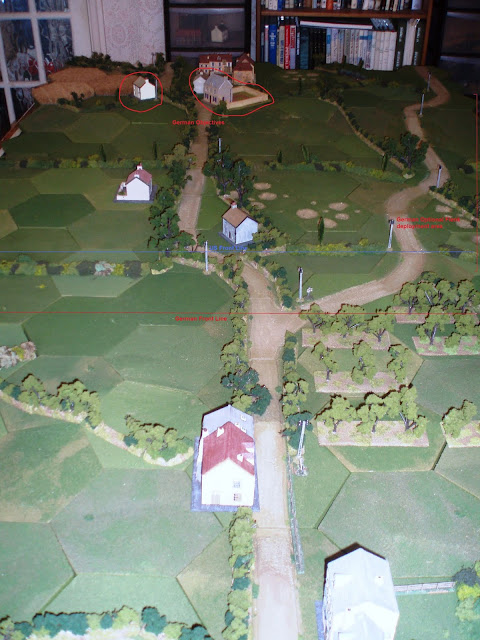 The table and set up map show the starting positions and the objectives buildings at the top of the picture that Panzer Lehr had to capture. If they also took the manor house seen right at the extreme top of the picture on the North edge, they would gain four attachment credits, which would come in very handy for the next game. In addition because the US forces in the Hauts Vents game failed to capture their objectives, the Panzer Lehr have an optional flank set up area on their right flank. 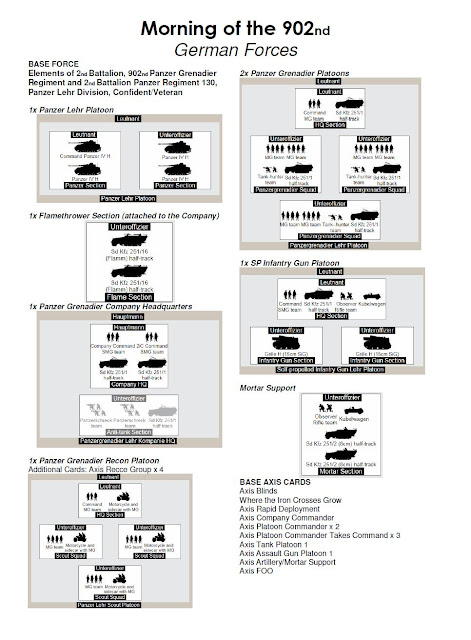 The German battle group was very powerful with two armourd panzergrenadier platoons backed by mortars, tanks, SP guns and flamethrowers. In addition Steve managed to get the Recce platoon as his additional attachment enabling him to scout ahead of his main force. 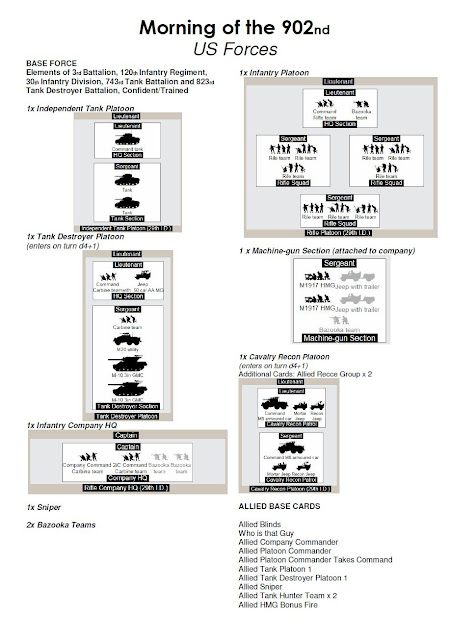 The US forces represented the infantry of the US 120th Regiment, 30th Infantry Division, who had been battling in the hedgerows for several weeks since D Day. They were thus subject to an attrition die roll at the start of the game to represent this state, forcing me to remove a stand on a die roll of 1-2. This removed six groups including an HMG before a shot was fired. In addition, because Steve opted for the night attack option, my M10 TDs and additional recce platoon would now arrive in d4 turns as immediate reinforcements. It was obvious that with this reduced force I would not be able to defend the whole position and so I looked for obvious choke points such as gateways and enclosed fields where I could set up all round defence and turn neighbouring fields in to kill zones. 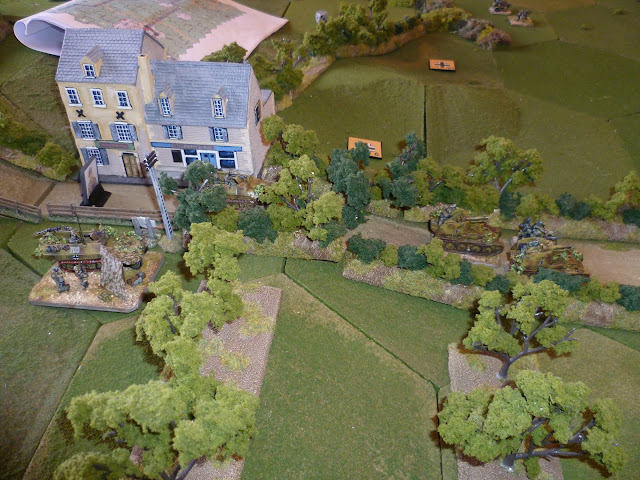 As expected, the Lehr recon platoon lead the intial probing of my defences. We had all un-spotted units recorded on the maps, or as blinds on the table until they were confirmed as troops. This gave the uncertainty that the actual commanders had to deal with when fighting in the bocage at night. In the picture above can be seen the Company commander and 2IC vehicles parked up on hill 91, with the two Grille SP 105 sIGs supporting the following Panzergrenadiers 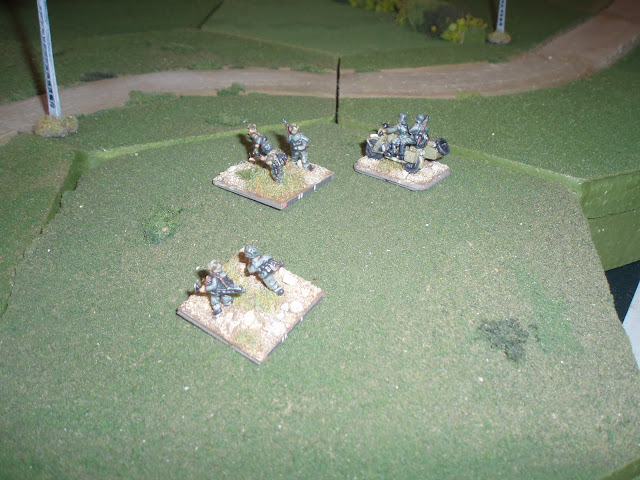 The Grilles probed a bit too far down the road and one vehicle was disabled and the crew abandoning it after a shot from one of my defending M4 Sherman's. 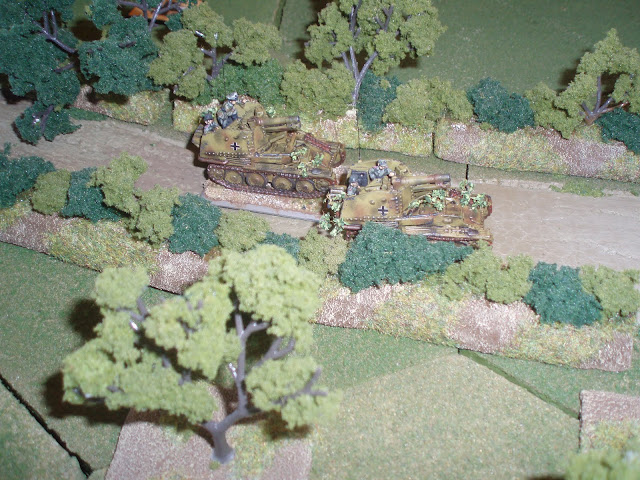 The picture below shows one of the Panzergrenadier platoons that came on on the US flank deploying and carefully approaching the field my US platoon were holding. 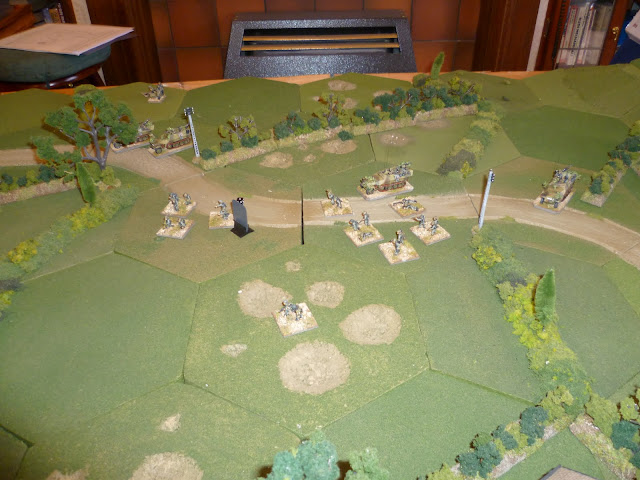 I had placed the Sherman's in the corners of the field so they could contribute to any fire from my infantry. The US Company CO can be seen in the centre and off to the left are some Panzergrenadiers finding the only hex of mines placed to cover the gateway on that flank 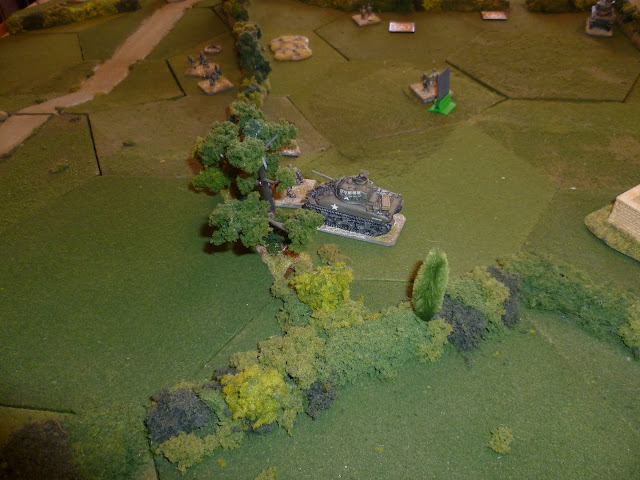 The picture below shows the German positions at the bottom of the field. The terrain and darkness made it difficult to maintain command, and the US infantry were able to hit this platoon the hardest causing them to fail two mission resolve checks, without quite being able to break them with a third failure 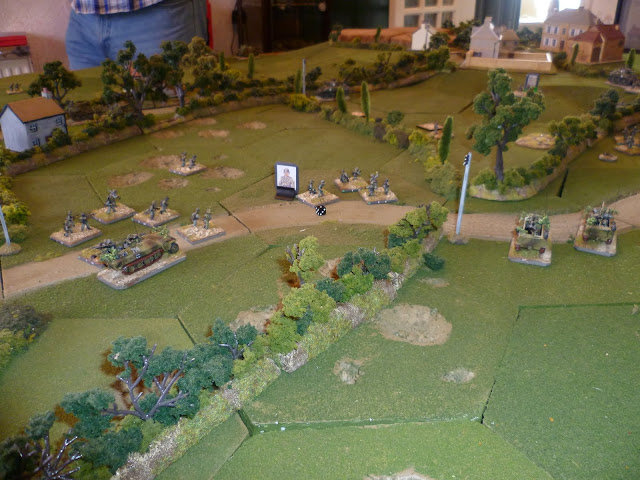 With the Panzergrenadier section stuck on the mines and losing a casualty, I opted to close assault them taking them out but losing a casualty myself on my own mines. The casualty markers are testament to this battle. The Lehr platoon leader has moved up to clear his casualties in an attempt to stop his unit breaking. 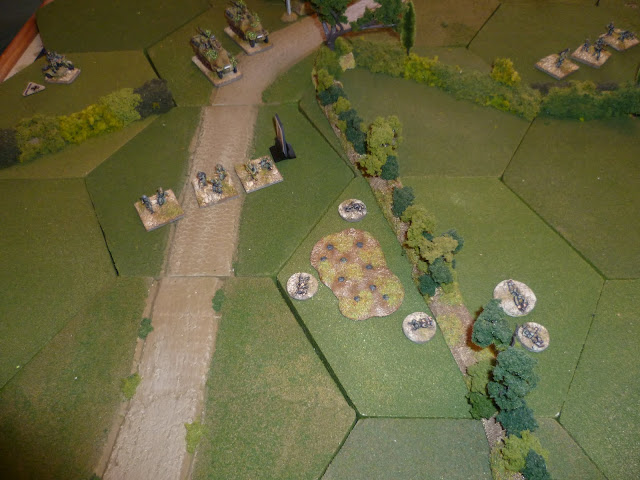 Meanwhile on the other flank the main Lehr force was labouring across mud and bocage to turn the right of the US positions. I could only use my Tank Destroyer platoon to delay the inevitable and try and exact a toll on the advance. The burning Panzer IV was one success and caused the German armour to stop and wait for the infantry to catch up with them and lead the assault into the objective buildings. 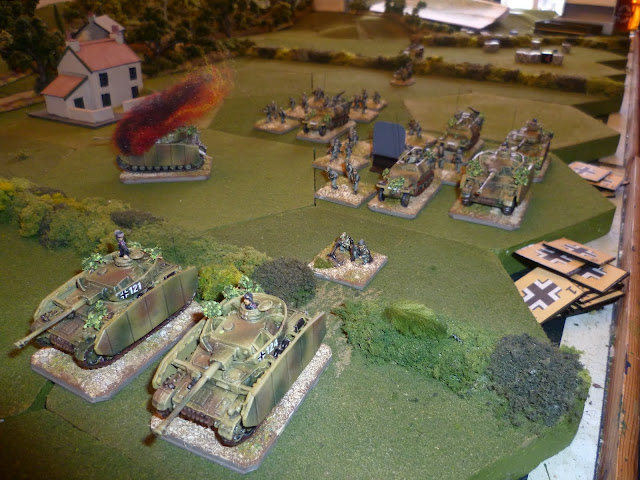 With the arrival of the Panzergrenadiers the full armoured force was ready to assault the manor complex. 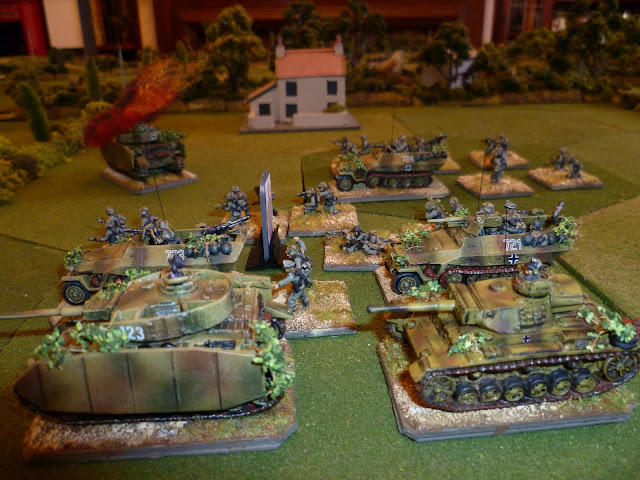 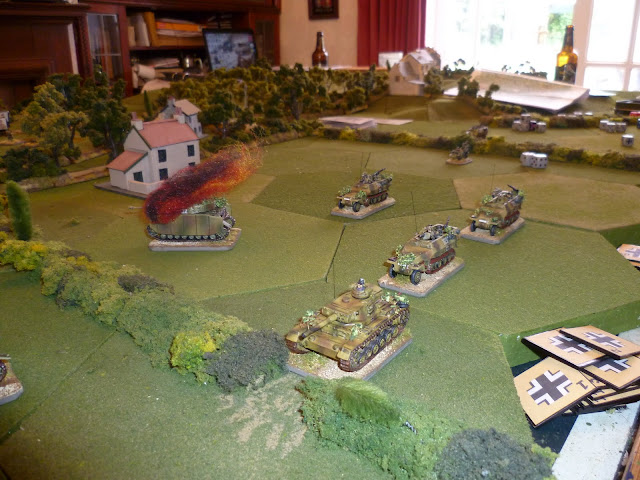 By turn eight and only one turn to go before checking for game end or an extension, the US forces were being forced back into the buildings. The Sherman's added their combined firepower to keep open the road back to US lines. 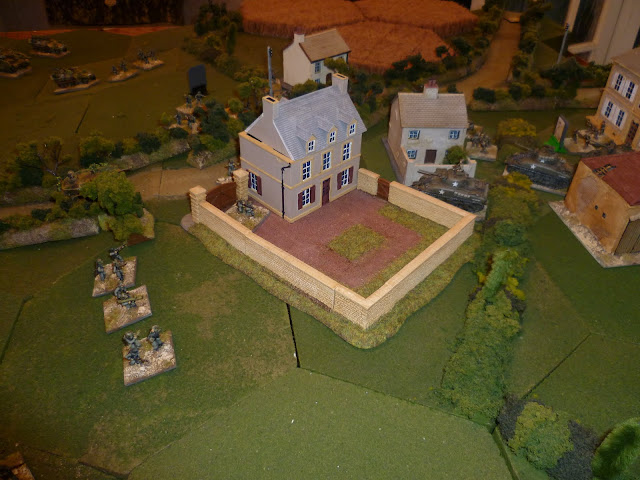 As the Lehr closed in for the kill, and a final lunge to capture the manor turn nine ended and a d4 was rolled, with 1-3 indicating an extension of that number of moves, and a 4 ending the game. The die gods took a hand and a four was duly rolled. The game ended with 8 victory points to the US and 10 for the Germans, but the manor was not taken. One Sherman and one PzIV were knocked out and one M10 and Grille were disabled and abandoned. The US infantry executed a textbook withdrawal in the face of the enemy losing eight stands of infantry, and surviving two mission resolves at below 50% strength, also losing their platoon commander in hand to hand fighting. Likewise the Lehr platoon that suffered on that flank were in on the objective, taking out one of the annoying M10s with a well directed barrage of Panzerschreck shots. 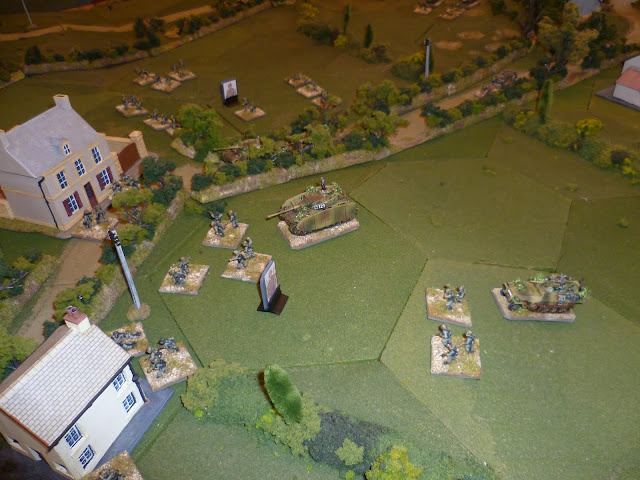 And the next game will be on the same table but with the full weight of US 3rd Armoured Division looking to counterattack and roll back this prong of the Panzer Lehr assault. 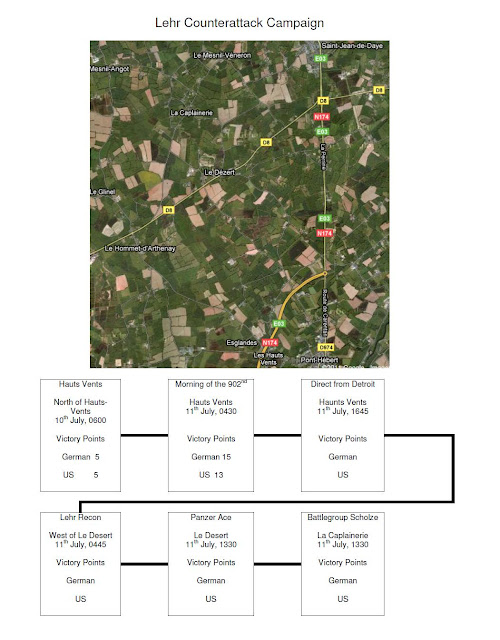 Thanks to Steve for a great days wargaming, good times.
Jon