Not being avid Royal watchers, Steve and I got together on Royal Wedding Day to kick off a mini campaign based on the Skirmish Scenarios Book "Heroes of Omaha and Panzer Lehr". As a display of loyalty to the Crown we did take a moment to toast the happy couple, several times as I recall!!
The particular campaign chosen is the Lehr Counterattack campaign of six linked games that recreate the attempt by Panzer Lehr to counterattack American forces threatening to engulf St Lo in early July 1944.
Having suffered 30% casualties facing off the British in front of Villers Bocage, Panzer Lehr were rushed in to bolster the front in the US sector. The first game "Hauts Vents" features the German Kampfgruppe Heintz (see orbats below) in front of Hill 91 which overlooks St Lo attempting to hold back a thrust from US 3rd Armoured Division, prior to the arrival of Panzer Lehr. The next two scenarios are also fought on this map, so Steve and I plan to carry on to the next game taking the consequences of the result of this one. As this was a linked game it was important to both sides not to take a heavy loss, as this might impact heavily on the prospects for the entire campaign. 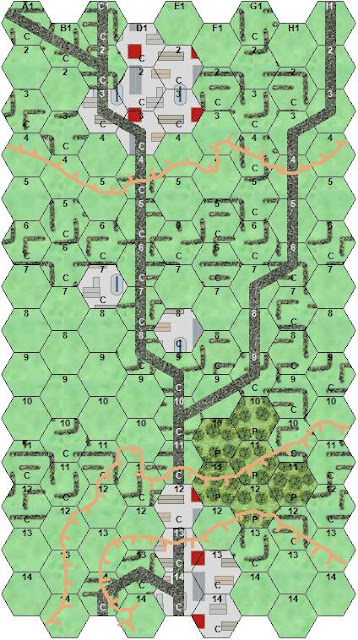 The map shows the terrain with north at the top. The table represents a valley in between two ridges, the highest being the Hauts Vents village on top of point 91 at the south map edge. The Germans were able to occupy all the ground except the six hexes in the top right corner, the US entry area. In addition the US armoured infantry had the option to enter from the top left four hexes. The two buildings in the valley floor were the American objectives.
The table threw up several challenges for both sides but principally the US having to attack. The buildings and bocage were considered "closed terrain", requiring massed firepower to kill enemy groups in those hexes. The long table enabled the Germans to position OPs and AT guns on hill 91 and be able to see US units maneuvering and cover large areas of open terrain. These problems together with muddy ground due to recent rainfall, causing wheeled vehicles to bog, and a pesky German PaK 40 on the eastern board edge able to fire at US vehicles ending their movement in open fields on that flank, forced the US troops into prepared killing zones and required a level of circumspect before moving.
The Germans were set up with full hidden placement, and fortunately the US were able to field two mobile recon platoons that enabled them to spot these ambush sites more effectively. 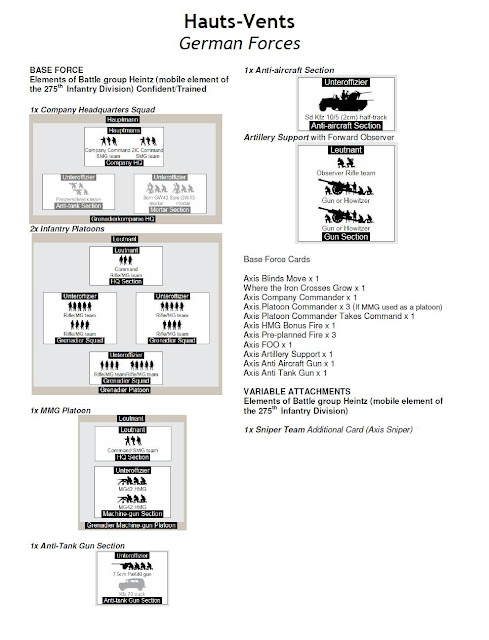 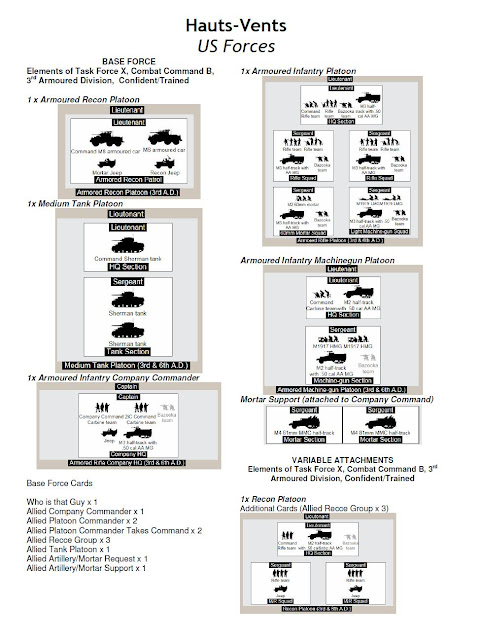 The table below shows the German held hill 91 in the foreground with the US entry and objective points marked. 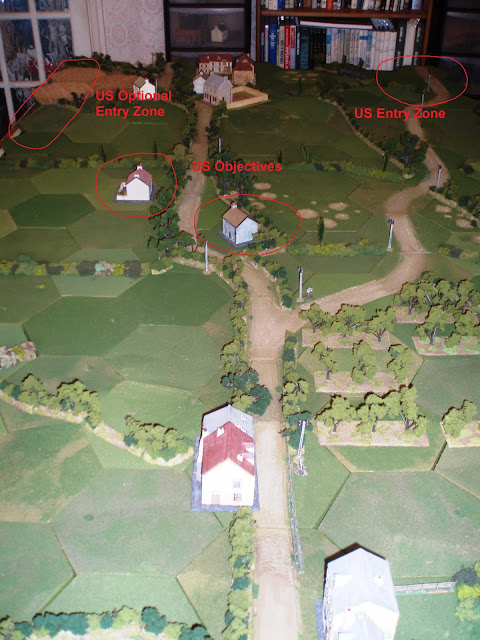 The picture below shows the Manor and neighbouring houses. The Manor was particularly important for the US as it was a three story building on the north ridge which gave a panoramic view of the German positions allowing the US mortars to play their part. 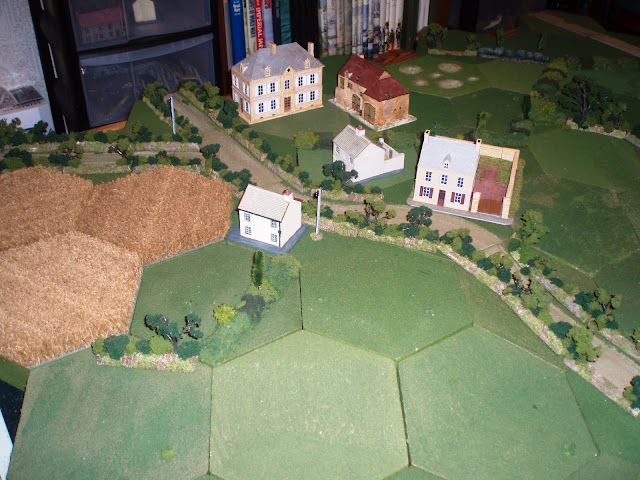 Picture below shows the outskirts of Hauts Vents on hill 91. The hill and three story building in the foreground were the highest points on the table and in German control. 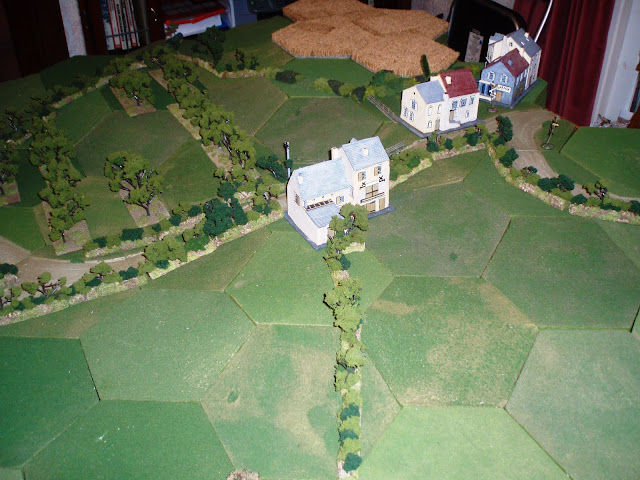 US recce soon established that the US objectives were strongly held with a platoon of infantry, the Company HQ, HMGs, wire and mines 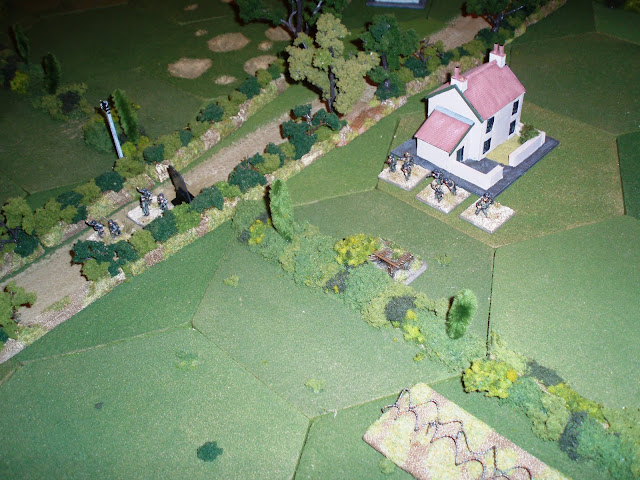 The US recce and armour were forced to deploy together and so commenced to shoot up the German platoon holding the Manor complex. They had to proceed carefully because the Armoured Doughs deployed on the other road, so the armour was very wary of panzerfausts. 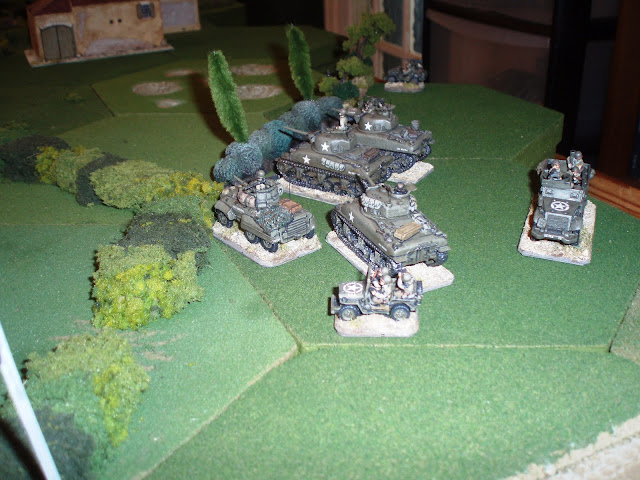 The massed fire of tanks, armoured cars and recce halftracks soon had the barn on fire and started to cause casualties. 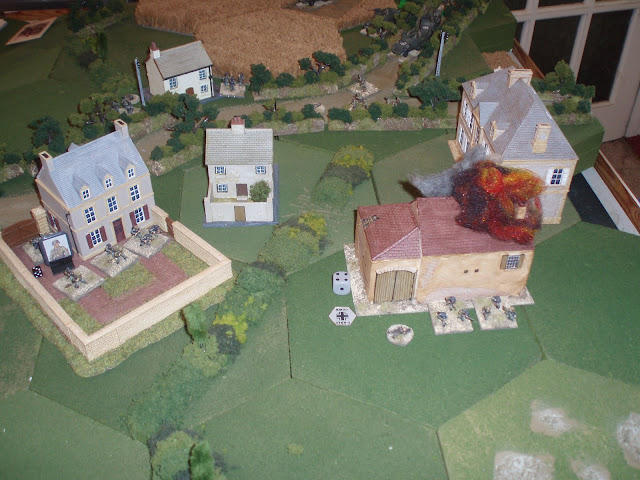 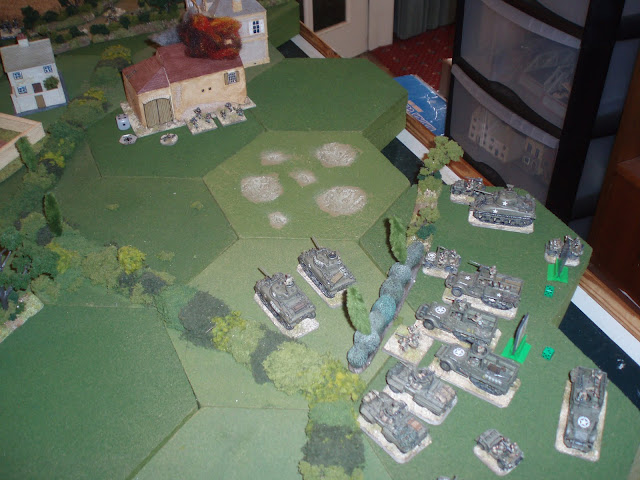 Meanwhile, below, the Armoured Doughs edged in from the other flank "brassing up" the house in the foreground with the Halftrack MGs. The infantry dismounted and prepared to assault, only to shoot up the house with a bazooka group and knock out the two remaining rifle groups. 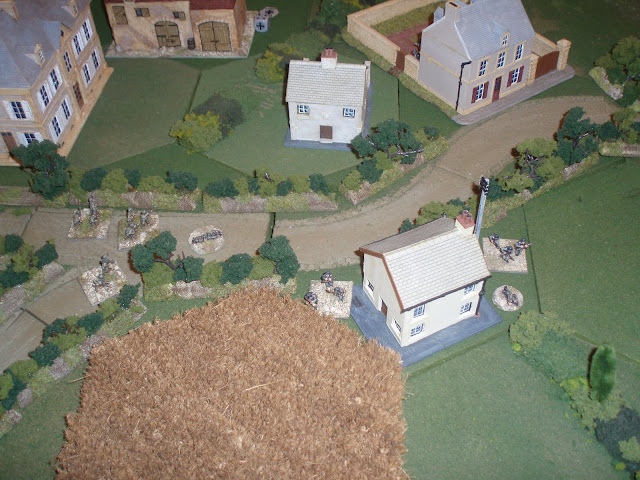 The German platoon commander was forced to pull in the perimeter and with two morale failures already, loosed off a barrage of rifle and MG42 fire at the Doughs on the road, wiping out the assault section. The commander then set to clearing casualties and removing pin markers in preparation for pulling back down the road to the Company MLR. 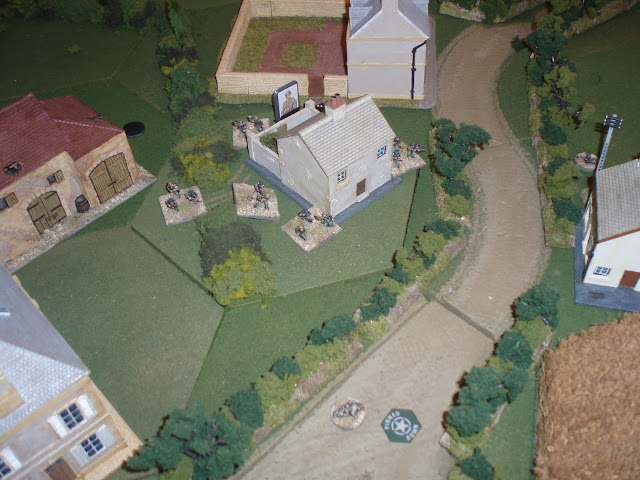 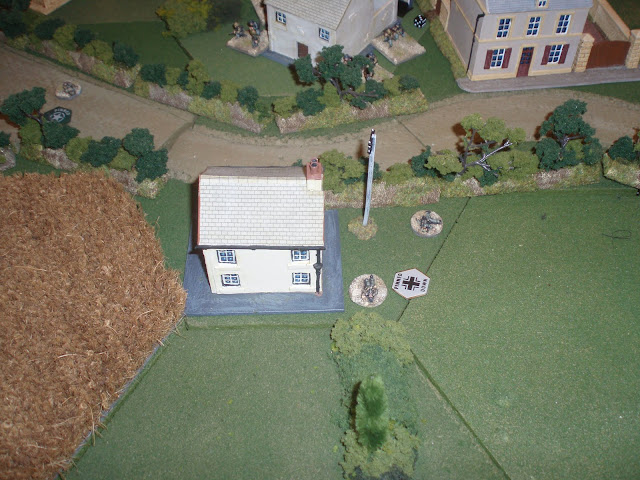 The Germans looked like pulling off a masterful withdrawal after bloodying the US advance only to fail their final moral check on the turn end and rout back behind the lines. 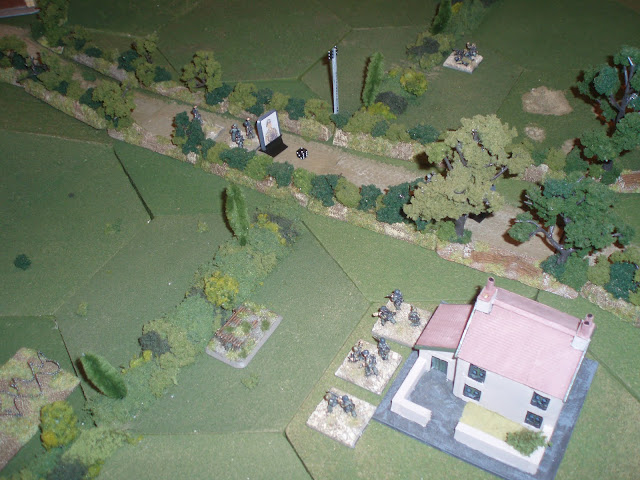 With the Germans ejected from the Manor, the US prepared to assault down the road into the valley (see picture below). However it was important to get the Company CO up in the Manor in contact with the mortars to either shell or smoke off German guns and strong points before closing in. This proved a frustrating exercise as it took the CO two moves to get into the building, only to discover the mortars were out of range and required a move to get on the table.
Despite getting a two move extension to the game on the random die roll at the end. The US forces had to be content with the ridge in their control. 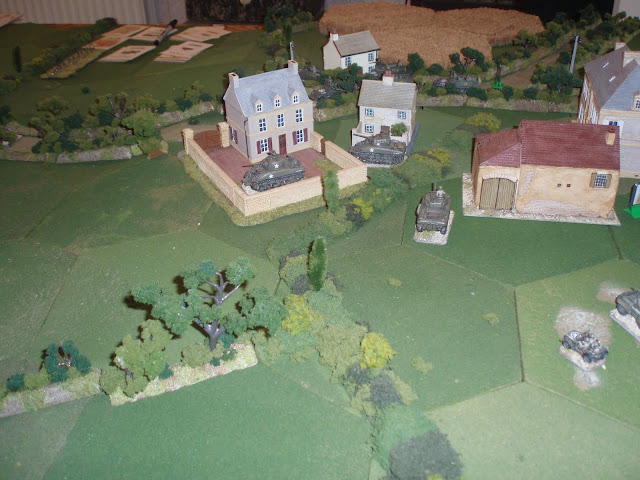 So the game ended in a German win as the US failed to secure the objectives in time, but as the casualties were even and no US armour was lost, the Germans do not get attachment credits (credits can be used to effect the chances of getting a particular unit in the next scenario orbat) but will get set up benefits in the next game.
Victory Points were awarded one for each group or vehicle destroyed (not routed, unless captured) German casualties were 3 Rifles, 1 LMG and a sniper. US losses were 3 Rifles, 1 Bazooka and 1 HMG group (Sorry Steve I missed the sniper off the list yesterday). Which gave 5 VPs to each side.
So the Campaign Score stands at US 5, Germans 5
Thanks to Steve for a great game and lots of laughs.
Happy Bank Holiday and best wishes to the Duke and Dutchess of Cambridge.
Jon
Posted by carojon at 09:34