Warfare in the Back of Beyond 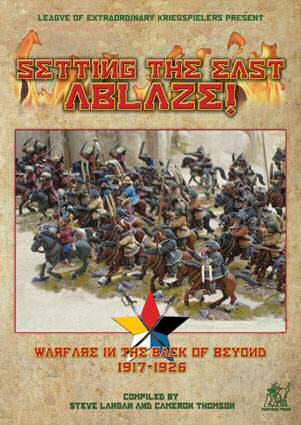 A big thank you to Chas for running a really good game today. Haven't enjoyed a bash like that for a long time.

We took to the Mongolian steppe to refight a strange little war from the early 1920's. An Austrian Baron called Von Ungern-Sternberg decided he had not seen enough slaughter in the First World War and fighting for the Russian army, so raised an army to fight for Mongolian independence (as you do).Needless to say the Bolsheviks had something to say about this, not least when he invaded
Russia. 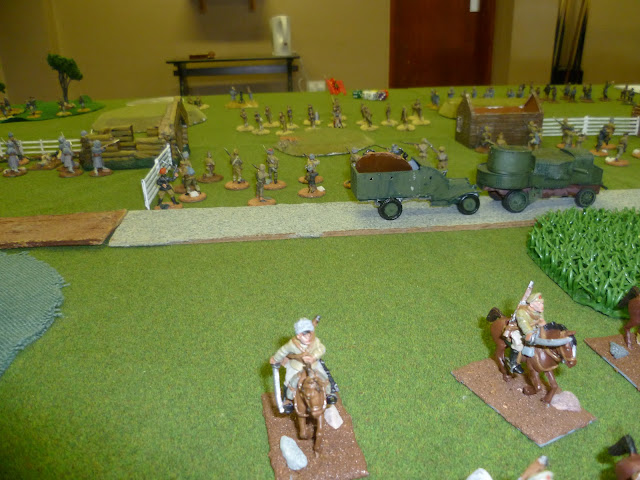 Andy B, Clive and myself took the mad Barons men. Chas and Andy C played the Reds.

The scenario saw a red convoy being attacked by the mad Mongols, Chinese and assorted bandits. The Reds had to get their main man off the table, with his car laden with Mexican silver destined for the pay chest (or perhaps a nice Dacha).

Our infantry flanked the road and moved towards the convoy. The reds deployed a number of infantry units and our Chinese infantry started to feel the pain. Red cavalry rushed out to cover the other flank. 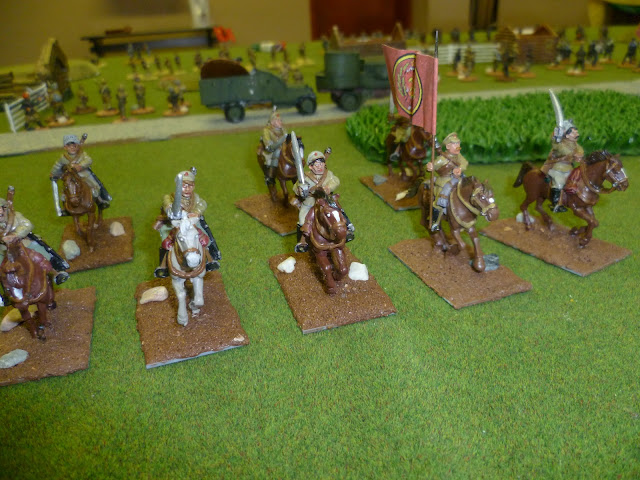 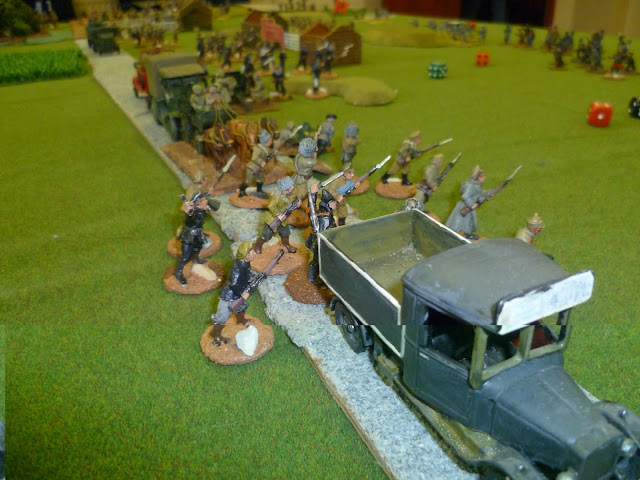 Our Mongol cavalry horde rushed on from the rear of the convoy and ran straight into the marksmen of the Siberian infantry. The Russians must have been panicked, as soon the Mongolian "Spoons" squadron was amongst them with two more Mongol horse units following up.

The rest of our cavalry broke right and flashed up the flank. The Russian armoured car and an HMG unit stopped to cover the threat.

The Red army cavalry clashed with the Baron and his bodyguard. It was the last thing they did. With the Baron there are no survivors. 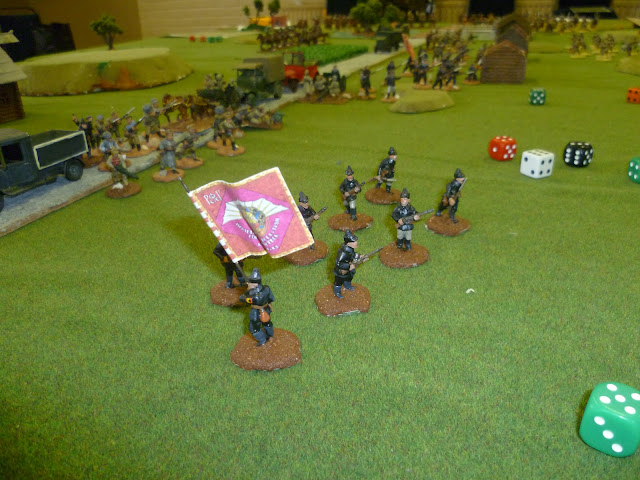 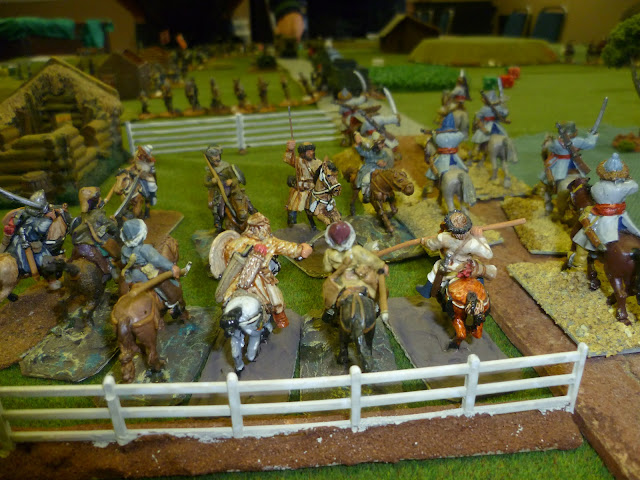 Despite Andy B's best efforts, the weight of fire forced some of the lesser units back and a couple decided to go home.

With his force engaged, Chas decided it was time to get his car off the road and make for safety.

Our infantry were starting to go to ground, but a unit of Chinese peasants knew no fear and to a cry of "Big swords", they burst over the crest of a hill and into the elite Cheka.

With Mongolian horse rampant in his rear, Chas deployed his last fresh infantry unit to cover his escape. What could go wrong ?

At that moment the Baron and his bodyguard charged into view. A volley from the reds failed to stop them, but it looked like they would fall just short. 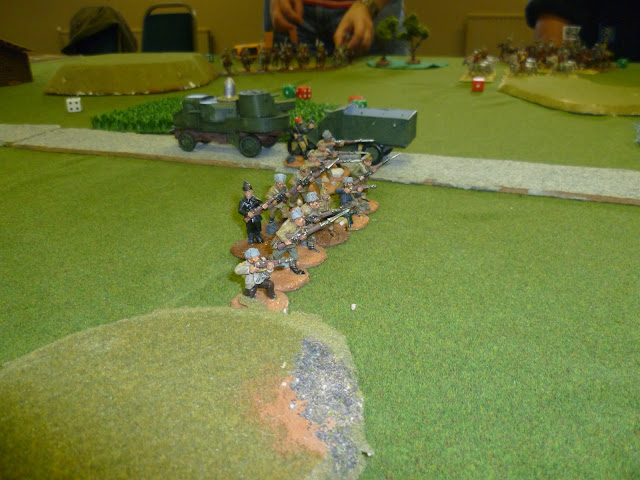 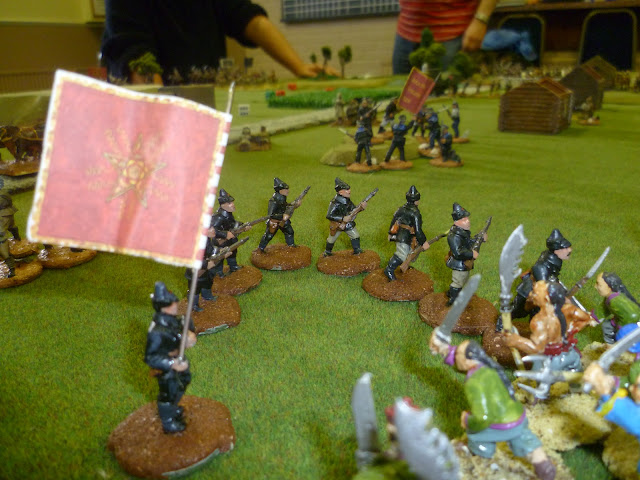 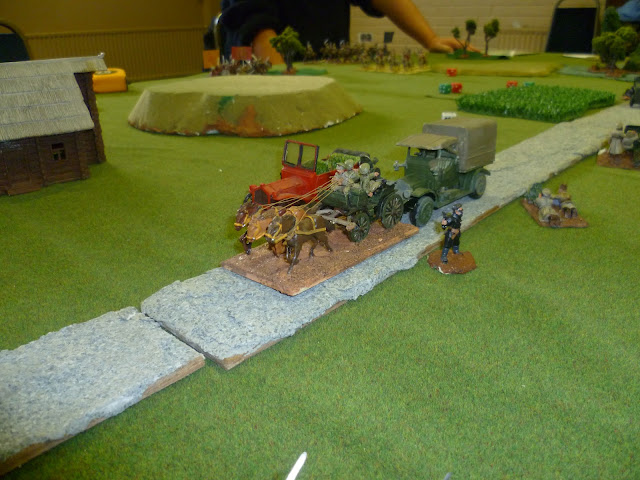 The Baron used his special rule to force an extra few inches out of the charge and the Russian commander fell beneath their whirling sabres. The last thing they heard was a shout from the Baron, "No prisoners."

A good outing for the "Setting the East Ablaze" rules and nice to see such a varied collection of 28 mm figures on the table. Most of the units were of very poor morale and fighting quality, but I've rarely seen such a mix of abilities, nationalities or weapon types on the same table !

Played in the usual easy going style, a good time was had by all.