Continuing with our testing of Battlegroup Overlord and our series of games pitting the 6th British Airborne up against the German defenders on and after D Day in the Orne Bridgehead, yesterday it was the turn of 21st Panzer Division to make their debut using this rule set. As the designer of this scenario I will discuss my thoughts further on JJ's Wargames 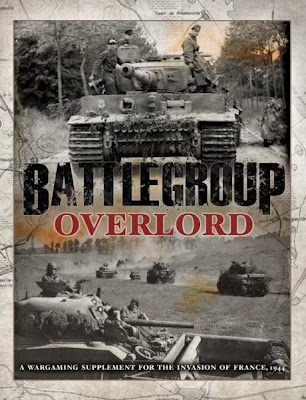 So, being tasked with pulling one of the games together for this month's club meeting, I turned to another of the Too Fat Lardies scenarios looking at 6th Airborne's capture and holding of the Orne Bridgehead, Bas de Ranville, where 12th Para were tasked with fending off a probe in force from 21st Panzer Division on the 7th of June.

So to our battle. The 12th Paras hunkered down in their dug outs as the rumble of "vehicles" approached from the south. That could only mean Germans, and with 21st Panzer close by, probably Germans with tanks. It was good to know that two six pounder guns were in place amongst the hedges together with a PIAT team and, if all else failed, the trusty Gammon bombs were on hand.

Unknown to the Airborne commander one of his six pounders was damaged in the lift and would only reveal that issue when either gun attempted to fire. The umpire die roll would reveal this problem, but not in ear shot of the Germans. As far as they were concerned they still had two guns to contend with until they knew different. This worked very well and the damaged gun remained in situ providing a clear deterrent until cleared in the initial attack.

As the German entered the field to the south of town they prepped the hedges to their front with copious amounts of MG42 fire, forcing the Paras back towards the buildings. As the attack was being lead and directed by the German commander who called on his OP to bring down mortar fire the British sniper opened fire.

The sniper was on his game and his first shot took out the mortar OP forcing the German platoon commanders to take over the radio. Within minutes the German company commander lay slumped over the side of his APC as the sniper located his head above the lip of the open topped half track.

With a layer of command and control removed the German junior commanders took control urging the men to close in on the first hedge-line to get cover and regroup for the final assault on the "Tommies".

At the midway stage the German force had suffered in its approach across the fields, but the British force smaller, initially, in numbers, had also burnt morale in having to maintain their defence by continually removing pins suffered under the weight of German machine gun and mortar fire.

Aware of how deadly the sniping was from the British, the German force commander set about dealing with this threat by sniping back at suspected buildings with SP 105mm shells. Eventually the HE rounds found their target and the sniper was dead.
The battle had reached a critical stage. The German force was battered but by no means out, and the British force was having to move and react to German threats in areas they were no longer in control of. This movement in the village was threatened by the ever growing mortar and HE fire that the German commander was able to call on. The MG42 was also becoming an ever increasing threat as the Germans attempted to smother known strong points in machine gun fire.

The British were, however, Veteran, which enabled them to avoid more of the pinning effects of the German fire, and the hard cover was also reducing their casualty count. These two factors, coupled with the fact that two fresh sections had arrived, marching to the sound of the guns, and had bolstered the British defence.

With one last hurrah, the Germans assailed the defences with their mortars and HE. Three sections of Paras were pinned in this maelstrom of fire and the German commander moved in on the back of this preparation, close assaulting a Para section holding the central orchard in front of the Para HQ. The British defenders were killed to a man and the Germans consolidated on the position.

The fighting was getting close up and personal and as the German 2IC directed fire from the machine gun on his APC a sudden strike from a PIAT bomb turned his battle taxi into a funeral pyre.

No quarter asked, none given, the battle became a final slugging match with Bren and MG42 fire ripping through windows and hedges with men falling left, right and centre. The morale chit draw was becoming regular and with the advantage in class lying with the British our game ended with the German force four points away from break point and the British still with twenty points in the "bank".

The Germans had thrown the proverbial "kitchen sink" at Ranville but as in the real affair, the Orne Bridgehead was a tough nut to crack and the defences held.

Thanks to Ian, Jack, Charlie, Steve and Nathan for a very entertaining afternoons war gaming. Next month we will be rolling out "Chain of Command".﻿﻿
Posted by carojon at 10:18