October's club meet saw us running three games, one of which was an "Hail Caesar" clash of Romans v Seleucids. As I took the photos but am not the expert on people with pointy sticks I have put together Steve's game report interspersed with my pictures of the battle.
﻿ 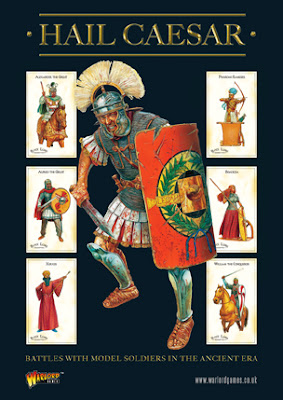 Wargaming with Romans is so boring, I mean picking an army is really fascinating, 90% are Legionaries, add in some light troops and a few cavalry and your done, what fun is that; and then there’s all that constant slaughtering of the enemy every time. However if you like to fight historically like I do then you have no choice but to bring them out as long as its not me that has to play them of course. Fortunately I have a very understanding opponent in Steve Huntsman at the Devon Wargames Group who indulges me by toga-ring up every time the Ancients come out.


This time we agreed to pack the table with as big a force as we could muster between us without having to resort to using Zulus or panzer grenadiers (you know what I mean) and this time it would be the Seleucids turn to fight against the tedious oppressors of joy.


760 points with Hail Cesar is a lot of figures so it meant I could pick all sorts of shinny toys and it took sometime before I came up with:


Steve spent 2 minutes and picked 90% Legionaries , some Light Troops and some Cavalry.


I chose 3 pieces of terrain and surprisingly the Romans picked none so it was very bare, oh well, better for me and my cavalry/pikes. The plan was the usual anti-roman one, win on one wing with my superior cavalry and hope everywhere else desperately hangs on long enough for them to save the day. Steve’s was to march quickly up the table and hack huge holes in the enemy infantry before his cavalry got crushed.


Quite frankly as I put out my units I had no idea were to deploy my Cataphracts, Galatians or Scythed chariots, in the end the Galatians’ anchored the join between the pikes and the medium infantry on the left wing with a unit behind to fill in after they went loopy and went looking for heads, the cataphracts and the Scythed Chariots backed up the right wing and waited for a suitable gap.


As I said at the start we used every appropriate figure available so I was stuck with these disposable chariots and Cataphracts don’t really do much in Hail Caesar. My hopes were pinned on the stout hearted Pikemen and the good cavalry rather than the gimmicky stuff .

As is normal in Hail Caesar there is always one wing that continually throws high dice for moving and this was the Left (Seleucid) and Right (Roman), the Romans I think only moved 4 times in the whole game so I  can cover what happened here over 4 hours very quickly, some cavalry got slightly scratched and the Galatians charged various Light troops and wiped out around 3 units in total. At times it could have possibly got a little tricky for the Seleucids but those Romans just don’t pick allies that can be relied on to get stuck in.

In the centre there were the six pike blocks and these slowly marched forward until the two centres clashed with the Romans charging in. The beauty of pikes is that they stop the +1 to hit for charging which usually sees the Romans smashing straight through if they get the jump, (no infantry counter charging, and with the -1 save for pilum first round of each combat, very nasty, and usually fatal). However the Romans needn’t have worried as they won most of the combats and two of my blocks dissolved due to low dice rolls on morale. Now this was unlucky, first I had roughly the same number of attacks, plus I had +4 save (- pilum) and I could even lose by 2 and not even take a morale roll, then I only had to roll 8 or more to survive. Of course the Romans saved most of their hits, I didn’t and then rolled low. At this rate there wouldn’t be anything for the Cavalry to save, Being a six unit division I was two units away from breaking and these two units now had Romans on their flanks . The Romans then charged the last two untouched Pikes on the right of centre as well, however this Roman division had been shot up and had previously failed a Blunder test with a 1 (retreat + everyone gets 1 hit) so this was a stalemate for a while, the last two pikes continually lost their combats and equally continually rolled 10+ to stay on the table. Even with the minus for flank and Shaken they and their supports slowly wore down the Romans until they too were mainly shaken, when once Steve saved every hit now he couldn’t save a thing.

But what’s that I see sweeping in from the flank? is it Grouchy, sorry wrong game, is it the Cavalry? no it’s the Thracian Rhomphaia.


On the Right things were very different, the Romans (actually Gallic/Galatians) bravely advanced and then equally bravely started throwing 9’s for moving just as those nasty heavy cavalry got in range (can toy soldiers bottle go?). The Seleucids cunningly didn’t fail a throw irrespective of how many times in a turn they went for it and each cavalry fight was horribly one sided . Once the first unit got wiped out then it was sweeping advances and flank attacks until the Galatian warband that had made the big mistake of joining the wrong side saw not only cavalry on their flank but some sort of cart, and is that knives? surely not, what idiot would stick knives on a cart, why the risk assessment form alone would take a month to fill out and then there are all the training days on top. All this was two moves away so the Romans throw for orders and predictably throw 9 . The Seleucids didn’t.

In three moves there was no Roman Left wing.

Meanwhile in a tranquil leafy glade there were some Thracian’s busy showing each other their Rhomphaia and seeing who had the biggest one, however out in front they could see a large group of hairy Galatians heading their way and for a moment this wasn’t looking like what they had signed up for,


“ They promised me 90% of them would be Romans, all shiny and crunchy like“

but just as it looked like they may have to get dead un-happy about being dead, suddenly the Galatians weren’t there anymore; they could see some of their Cavalry and is that a cart with Knives on? (no it wasn’t as scythed chariots are taken off after one round of combat).

Only one thing to do now as the boss had ridden up and was watching and that was to charge the now exposed Roman Legionary flank fighting the nearest Pike block, and this is what they did, again, and again and again, until they were shaken but by then there wasn’t that many Romans left.
﻿
Steve pulled his second supporting line of Romans out to face off the now victorious Cavalry wing but it was neither strong enough or numerous enough, loses were too high and first one division went under 50% and then the next one as well. The Pikes hung on and for one nasty moment just before the Thracians broke the Roman Centre left division I was suddenly reaching for the rulebook as all of my pikes had become shaken and I was in trouble, however as usual I didn’t know the rule correctly.

If over 50% of your division is broken or all of your units are shaken then you must retire that division. However if in combat then you stay until either you win the round and therefore cannot follow up or the enemy choose not to advance if you fall back (basically break off in some way). My pikes were stalemated and of course I beat the morale roll required for drawn shaken units.


A Seleucid victory through determined throwing of 10+.

This is my seventh or eighth game and I am still getting rules wrong, this time I closed up skirmishers to fight hand to hand, No, only Light troops can do this, and I learnt that even if you fail your Evade order then you still get one move and not just stay stationary.

Thanks to Steve Huntsman for a good game.
Posted by carojon at 08:19