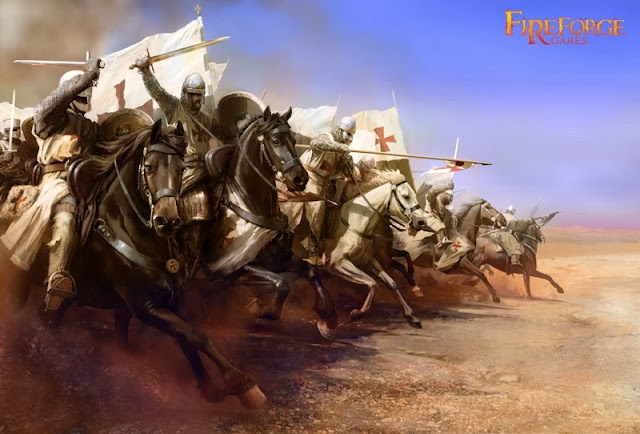 Report by Steve H, Pictures by JJ
Every summer we all put on our best smocks and head north to for the great Summer game . This involves much planning and preparation as we never seem to choose a period for which we already have masses of figures and this year will be no exception as we will be playing a big Crusader game (or whatever we are supposed to call this period now). 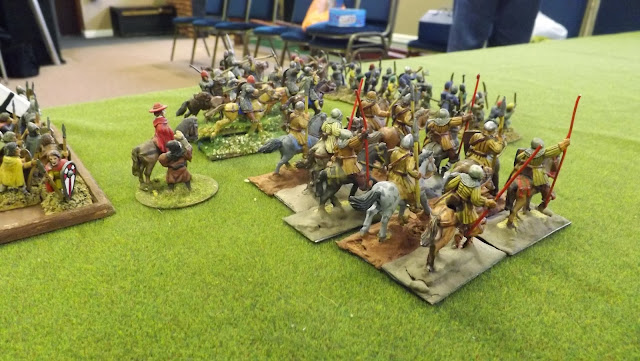 So the following activities need to be started in advance:
Buy and paint additional figures on top of any existing stock.
Parcel out painting duties
Learn the relevant rule set.
Get false birth certificates made up to prove that we are all related and this will prevent us being burnt in a wicker frame as outsiders.

A smaller advance game is also played to try out the said new rules so that we all have plenty of time to forget it all before the big event takes place in June/July. 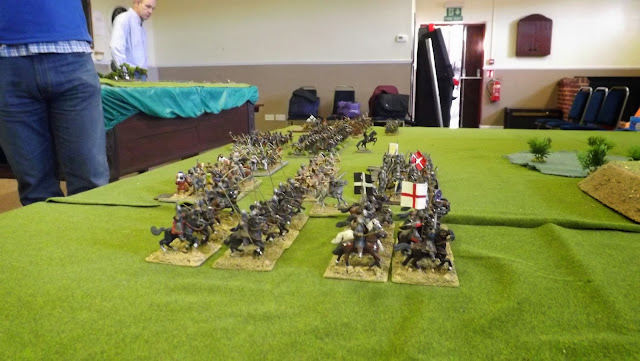 This month Chas bravely put on the trial game using the Deus Vult rules which are aimed at this period. There is no point giving a Battle Report as it was just a trial game where we tried to play out every rule going irrespective of its effect on the battle and also because I got completely wiped out . If you want to know about sequences and stuff then there have been much more complete reviews for Deus Vult on other sites like TMP which I suggest you read. Instead this is going to be a gamers’ first glance. What you get below is my summary of what we learned from the game, intermixed with pictures of the game taken by JJ. 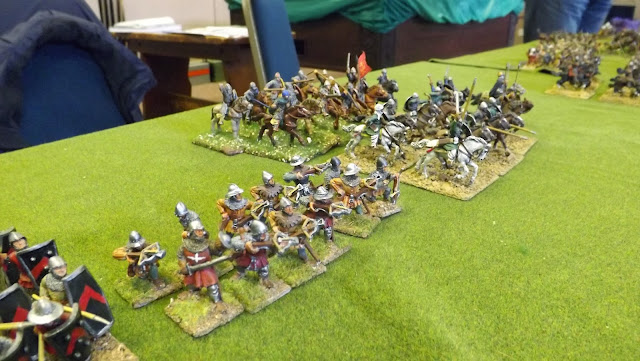 You start by splitting your forces into Divisions, we had five each with four to six units per division and the divisional commanders have various ratings which are rolled for against a table, recorded onto their individual card and these are used as required.

Each unit also has all the normal stuff you would expect as well, all be it with different names. Discipline is used for movement decisions and Courage for morale (overly simplified by me) but you can on occasions use your Divisional Commanders ratings instead if within the 8” radius.

Then you decide each turn who has the Initiative (Straight roll off) and you stack your Leader Cards in the sequence you wish to move them, each side then moves one division (Initiative Winner decides which side gets to move first) and carries out all shooting and fighting before moving on to the next. 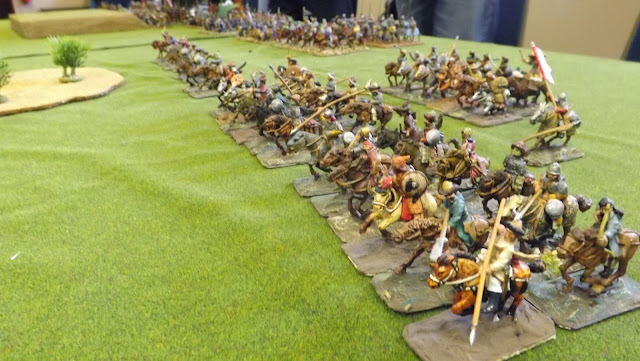 What did I learn, well obviously not much given my complete lack of survivors but here goes.

Commanders have a Command rating either rolled for as above or historically allocated and this determines how many units in your division you can choose to move each turn. 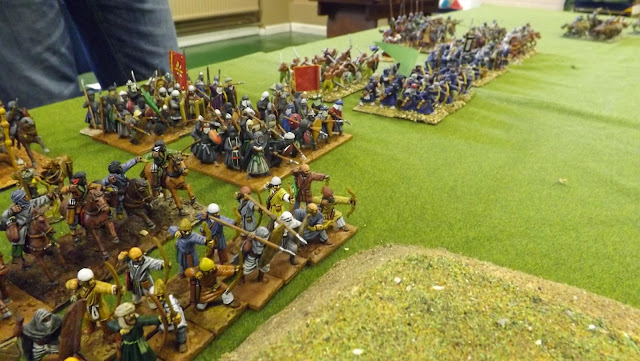 Suppose like our reserve your command rating is one and you have four units , well each turn one unit can take actions as normal and you join a second unit for the old follow me type stunt. The other two units must then wait until everyone else has moved and either do nothing, or roll against their Discipline rating to activate. 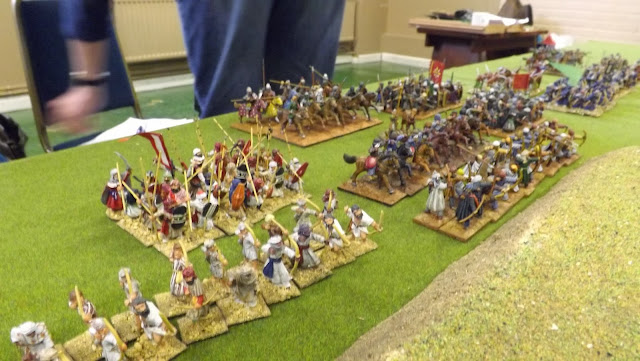 Now I wish at this point  to add in a common occurrence. Whenever you have to do something like a Discipline Test or Morale/Courage you get to do the 4+ roll . As long as you can score 4+ on a dice you pass, I like this as its simple, no cross referencing multiple lists. Better troops/leaders get to roll more dice but still only need one 4+. So our elite reserve got to throw two dice to try and activate for being out of command and my scummy ill-disciplined horse archers only had one roll which is why I failed my evade dice three times running.

Ah ha you say, why not use your commanders rating instead, that’s all very well but he was also a one and besides he was underneath piles of dead horse archers.

Failure is punished by going into disorder so think before you roll. 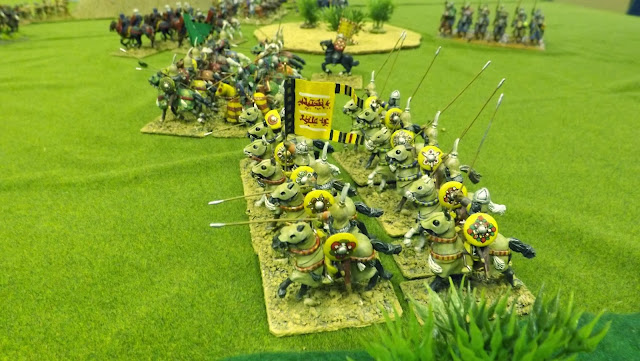 Shooting is ok as well, ranges are quite long but suitable for 28mm and you get two dice per six man infantry base and one dice per two man cavalry base. 6’s are killing hits with 4’s and 5’s being what I call morale hits. First try and save the kills against your armour save and then add all the hits together to see if you have forced a morale/courage roll (the old 4+ again). Usually anything between three to five hits will be enough depending on the troops. You can shoot twice if standing still. 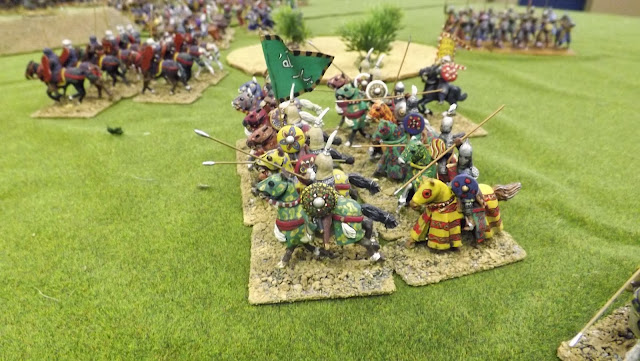 Now hand to hand. This took me a while to absorb, the main point is that you don’t get to fight back until its your turn and this takes a bit of getting used to, plus if they have already moved that division this turn then it is possible, with good luck, to hit them again in the next turn before they get any chance to reply. Hand to hand requires lots of dice. Hits as per shooting above. 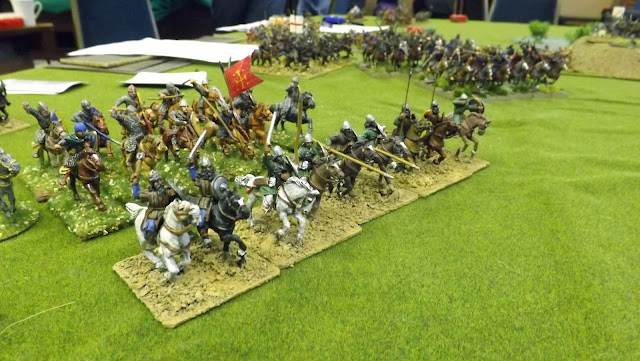 
If charged and you have only one dice to roll to try and evade then you might as well counter charge no matter how puny you are . 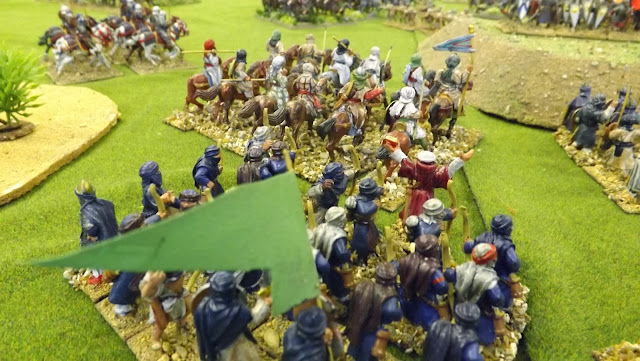 You see we are now moving on to Disorder, this is heavily punished in Deus Vult.


Never get disordered. If you fail a 4+ roll then you are disordered (there are other ways but that’s the main one). If disordered then all shooting and combat dice are now changed so that a  4/5/6 will kill. Nasty! 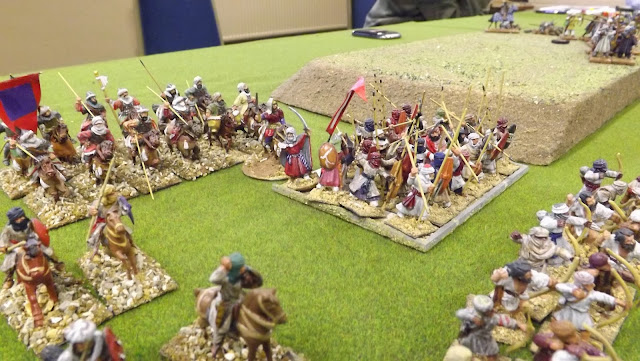 In our game a unit of half dead knights, (that’s half dead not undead) being rather miffed about the amount of pointy things coming their way, charged all those responsible and each time my horse archer units got charged they failed the evade roll, becoming disordered and got to lie down in untidy heaps very fast.

I admit that if I had instead counter charged I would still have had to pass a Disarray test but without the rules I don’t remember if this was as bad. Probably. 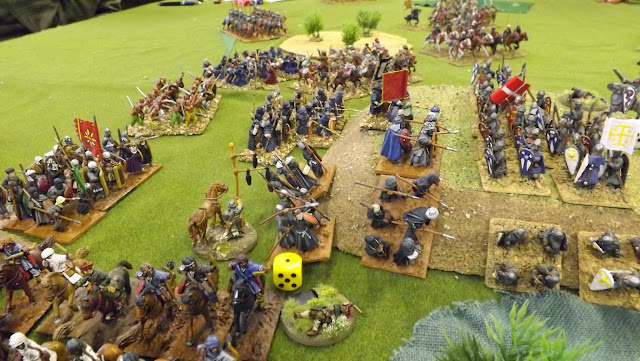 Finally each unit has a mass of additional skills like Counter Charge or Manoeuvrable , I think the record for one of our units was nine and these all do various jolly things to liven up the day.
So don’t get disordered, and finish off those weak units (taken off when you lose the next base after 50% e.g. if six bases strong then remove from table when down to two bases). 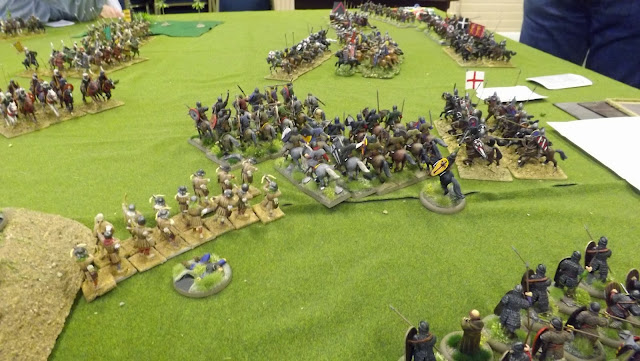 Obviously it was our first time so we must have made masses of errors, however we did try out as many rules as possible and it looks a promising set of rules suitable for the Summer Game.
Posted by carojon at 11:01