One of the games laid on at the club yesterday was a 15mm Hail Caesar encounter with Early Imperial Romans up against Early Period Germans. Mr Steve Huntsman was our Gamemiester for the day, still on the wrong end of jet lag, but managed to lead us through the Hail Caesar rules, as most of us were playing our first game, including me. 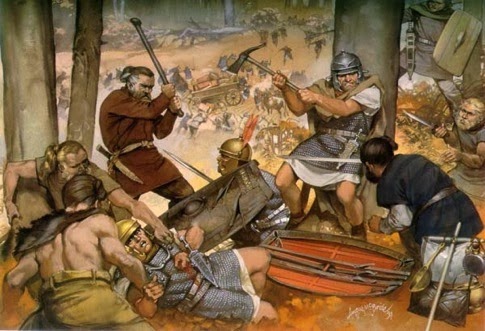 We diced to see who would set up first, which the Germans won, and so  the Romans in three divisions were invited to set up first. Following this the Germans deployed in two divisions of about 8 and 10 units each.

Hail Caesar works on the principle of players announcing their intentions and then rolling dice to see if their command and control is capable of allowing the intention to be carried out and to what extent.

Thus as Romans, two d6 were rolled against the standard command rating of 8, with 9 or more being a fail, 7 or 8 giving one move, 6 two and 5 or less three moves. A move being movement or formation change. If units of a division are in a chain from their commander, within six inches of each other they can make divisional moves. To reflect the discipline of the Legionaries, they are assumed to be able to move once in a turn automatically if they fail a command test.
Thus it was that the German left division, the stronger of the two, failed its divisional order to advance on the Roman right and centre. Appreciating the opportunity to get the jump on their barbarian opponents, the Roman left and centre divisions advanced rapidly towards the German right division using their massed cavalry to keep the attention of the other German division.

This, right from the start, became the defining moment of our game as the German left struggled to move to assist their comrades on the right all the while having their heals snapped at by marauding Roman allied cavalry.

As the Roman lines closed with the German right. the Roman left division quickly overcame the extreme right hand units of Germans and proceeded to turn their flank. As the neighbouring units attempted to turn and support their friends they exposed their flanks to the oncoming Roman centre division. As Legionaries charged in on their German counterparts winning some encounters getting pushed back on others, the battle for the German right flank degenerated into a slug fest as the two side wore each other down in a series of multiple melees.

The Germans were using their "wild fighters" attributes, re-rolling up to three failed hand to hand attacks in their charges together with their higher clash value of 9 dice rolled versus 7 for the Legionaries. It return the Romans were lobbing in their pila with each charge reducing the German save attempts from hits achieved in the hand to hand combat phase. The net result producing a grinding down of the opposing units as each side attempted to break the other before supporting units could intervene. All good fun and very nerve racking at times.

On the Roman right the Allied cavalry quickly drove off their German opposite numbers together with some infantry that attempted to come to their aid and immediately swung around and behind the German left flank, forcing the rear most units to about face as they attempted to move towards the fight on the right. This helped to slow any succour the German right wing commander could hope for and gave the Legionaries more time to wear down the opposition.

One highlight for the Germans was the sight of the Roman Cavalry Commander getting carried away and leading his men into the charge taking a wound for his trouble but managing to win the melee. Good stuff and exemplifying the spirit our game was played in.

As the German relief force closed in on the Roman right centre, the German right started to break up as unit after unit of German infantry started to go shaken status and the inevitable happened as the units started to break in the melees. Once a division has more than half of its units destroyed or left the table then it is deemed broken causing the remainder to become shaken and forcing the division as a whole to quit the field.

Thus with the German right division broken we deemed the Romans had achieved a Pyrrhic victory able to hold the field at night fall and recover their dead and wounded comrades of which there were many.

Many thanks to Steve, Ian, Ollie, Jason and Tom for a very enjoyable afternoon battling in the forests of Germania, "On my command unleash hell".

For my thoughts on Hail Caesar rules check out JJ's Blog