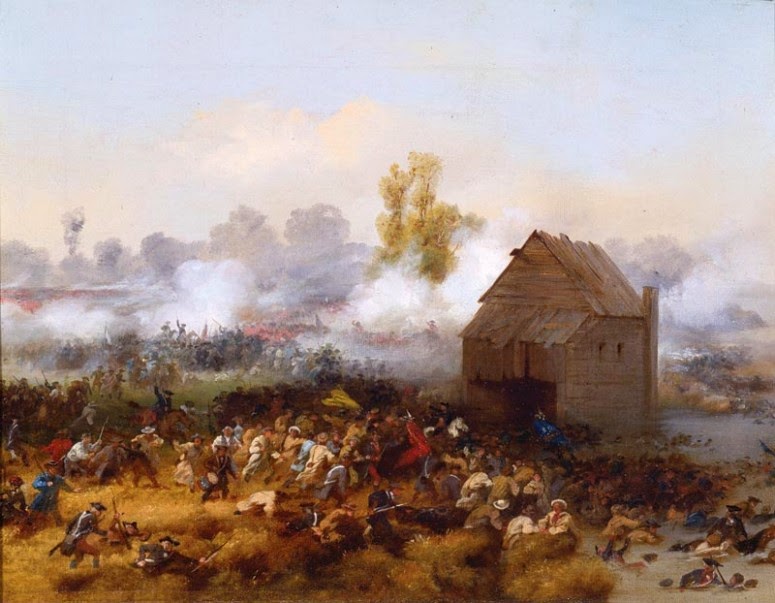 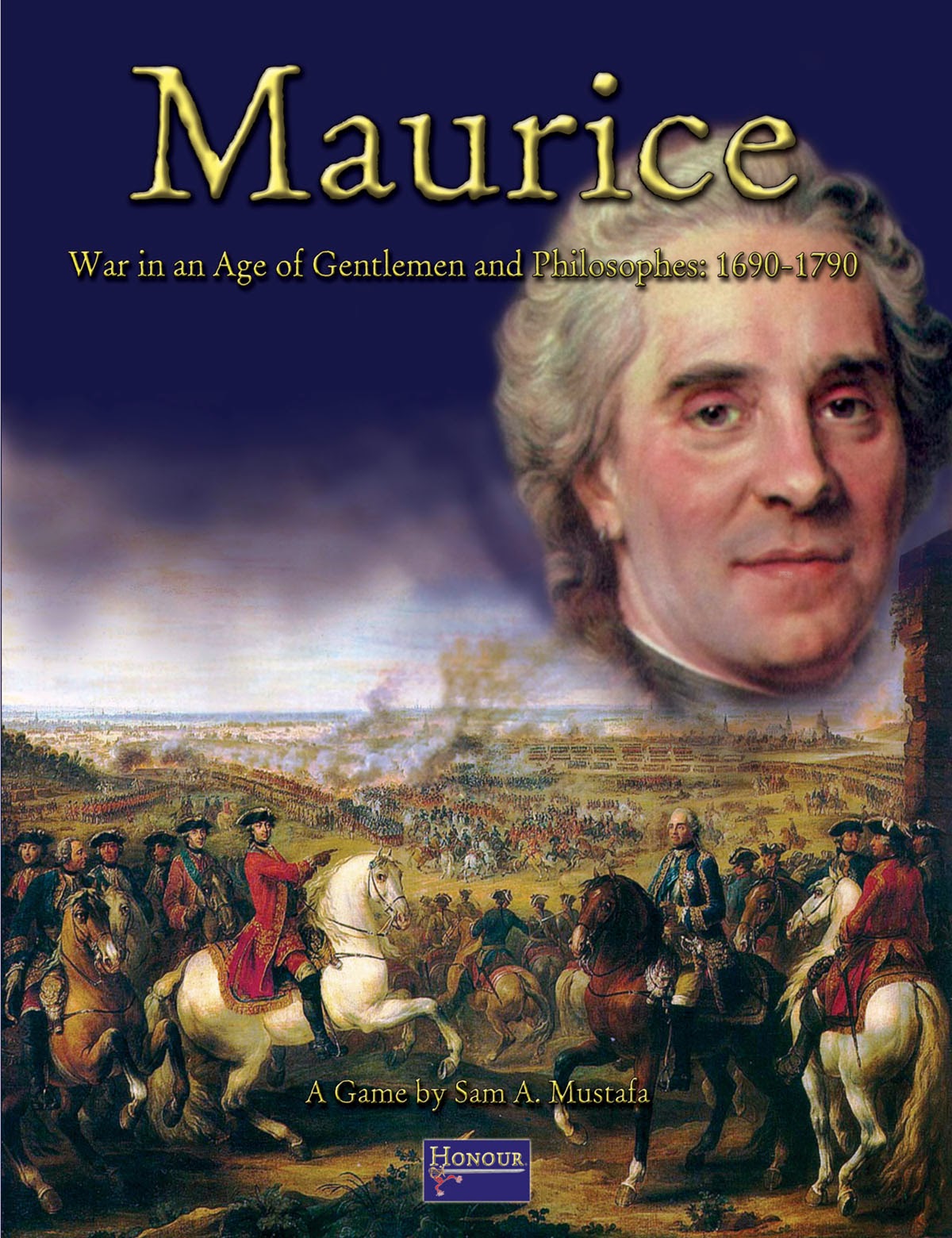 Every now and then you play a wargame that really holds the tension throughout, with swings one way and then the other, finally culminating in a dramatic climax. Such was the game we played yesterday at our first meeting for 2015.

I designed the scenario around the the board game scenario from "Hold the Line"from Worthington's Games.
http://boardgamegeek.com/boardgame/35342/hold-line

The scenarios in the game provide a rich source for games easily converted to Maurice, and this one uses the orbats and set up for the "Long Island" scenario. 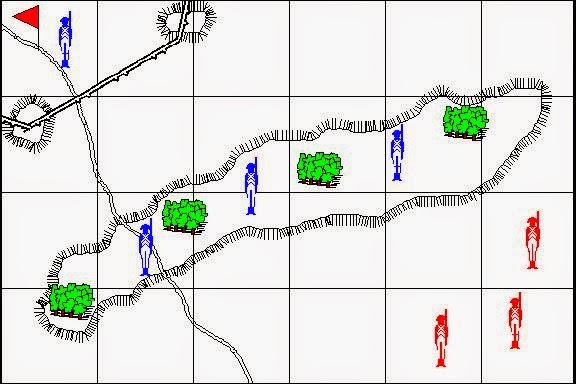 So my map illustrates the set up positions for the British and American troops, together with the objective positioned behind the defences protecting the American embarkation point.

Two thirds of the American troops are strung out on the ridge defending the approaches and need to stop the British getting the objective and avoid a morale defeat whilst trying to break the British morale if they can. The playing through of the card decks in Maurice act as the clock in the game, so the Americans can win by simply avoiding defeat until all the cards have been played 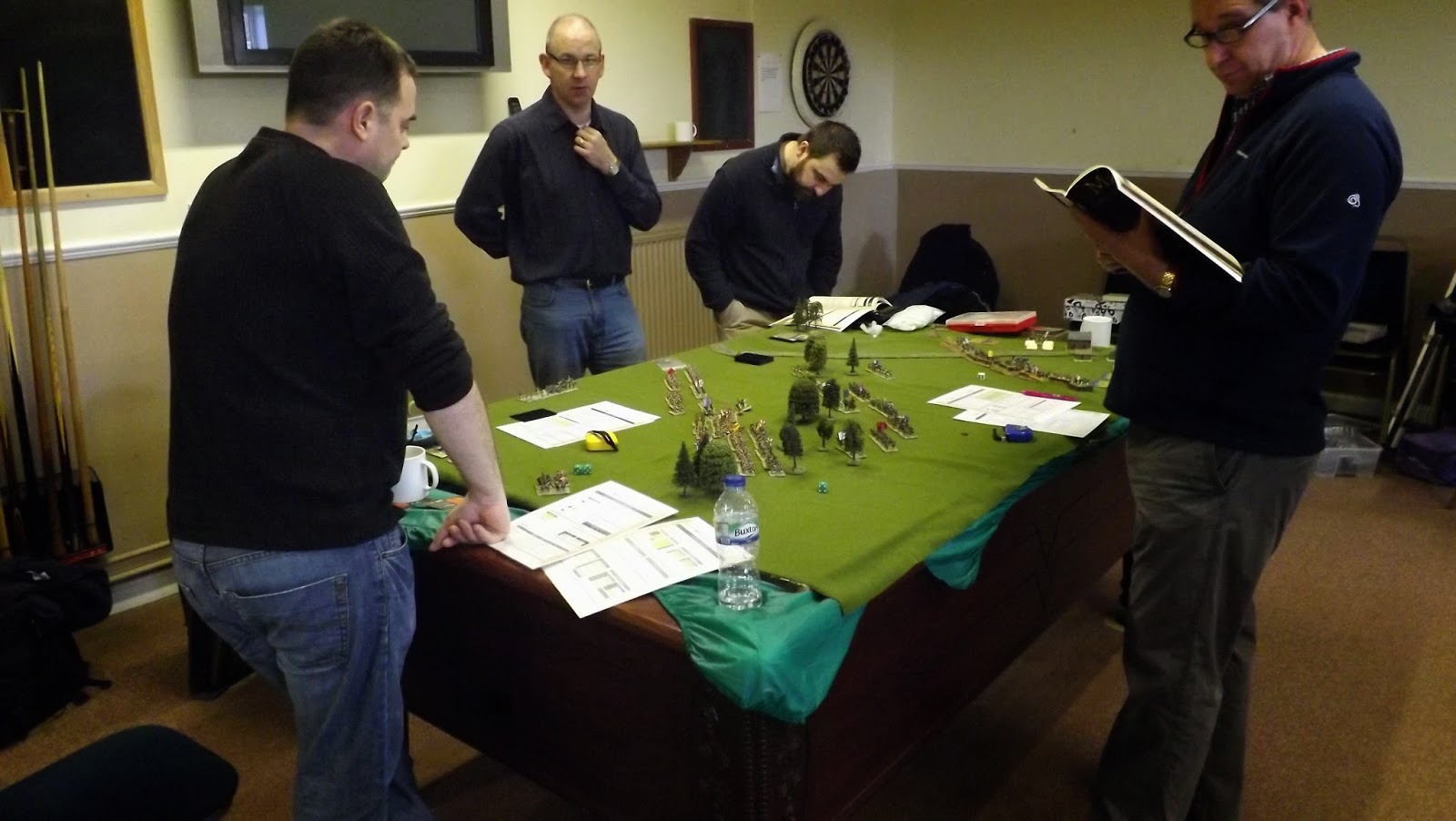 I determined the forces to be:

The British represent the powerful forces under Howe that conducted the 1776 campaign around New York with (Lethal Volleys) designed to encourage the British player to shoot his way on to the objective.

The American force represent those troops dedicated enough to resist this British Army, more comfortable defending than manoeuvring (Steady Lads), but with that determination to fight to save the revolution (Rally to the Colours).

With the terrain very much favouring the Americans but with the American army split with four battalions of Regular Trained (Continentals) occupying the defences together with their gun, and the remainder having to occupy the ridge line, the game presented challenges for both sides.

With all the troops in position and the cards dealt, we were off.

The British came on in a two deep line with a third line of units forward of their right flank as seen above. The Americans opted to put their militia forward supported by the continentals, knowing the copses along the ridge would disrupt the British formation.

Probably one of the biggest threats to the American position was the British cavalry which due to a lack of an American counterpart gave the British commander a threat of getting them in behind the rather stretched American line. Fortunately for the Americans, that threat never materialised.

As the British climbed the ridge they were met by some very effective firing from the militia. The combination of the British and American ability cards made the combats very entertaining and the initiative swung back and to for a couple of turns; until the British players brought the numbers to bear, together with some cute card play causing one American militia unit to charge its British counterpart whilst carrying three disrupts.

In another combat the American player attempted to avoid a volley phase hoping to rally off disrupts on another militia unit only to be forced into a volley phase by British card play.

The loss of the two militia units was also costly on army morale with a five point loss. The Americans struck back with the destruction of a Redcoat battalion and the playing of "Death of a Hero" card causing three points loss to the British.

As the British pushed the Americans back off the ridge we were close to the re-shuffle card appearing to set up the final deck.

The firing was general across the line as the British attempted to force their domination of the situation. The Americans resisted tenaciously losing a continental and militia unit but taking out another British unit in return.

As the reshuffle took effect, both sides were exhausted as we entered the final phase with the British having just one card to hand and the American with three cards.

The battering both sides had inflicted had reduced the American Army morale to five points and the British to nine. The slight lull in the battle allowed both sides to reassess their respective positions with the British looking the more crestfallen as they felt victory was beyond their grasp.

As the Americans attempted to retrograde march back towards the defences, conscious of the British cavalry threat, they played the "Retrograde" card, allowing them to drop back a whole move instead of just half.

The British responded by closing in on the forward American units and shooting themselves into combat using their Grenadiers and Guards to attempt to "seal the deal".

The final deck was coming to an end but so was American morale as with just two points remaining the Americans lost one combat along their line bagging the final points with the loss of that last American unit. The British were exhausted with just six points of Army morale left but able to claim a marginal victory.

This game played out very well and kept everyone involved through out, leaving me to exclaim that this was the best game of Maurice I had seen, and that is after I can safely say that I have always enjoyed playing this rules system. Sam Mustafa must be congratulated for producing a very fine game that is always a pleasure to play.

If you fancy giving this scenario a go, you might want to try getting that British cavalry to work, and the Americans decide on how they would fall back differently.

Yesterday was my first game in 2015 and if it is a sign of things to come, I can't wait.
Much thanks to Ian, Martin, Steve M and Phil for putting on a very entertaining days battle.
Posted by carojon at 11:15