This month's meeting at the DWG, saw "Mr Steve" get his lovely SYW toys out on the table to fictional clash between an Anglo/Hanoverian - Allied army vs his Franco-Swiss using the rule set Koenig Krieg 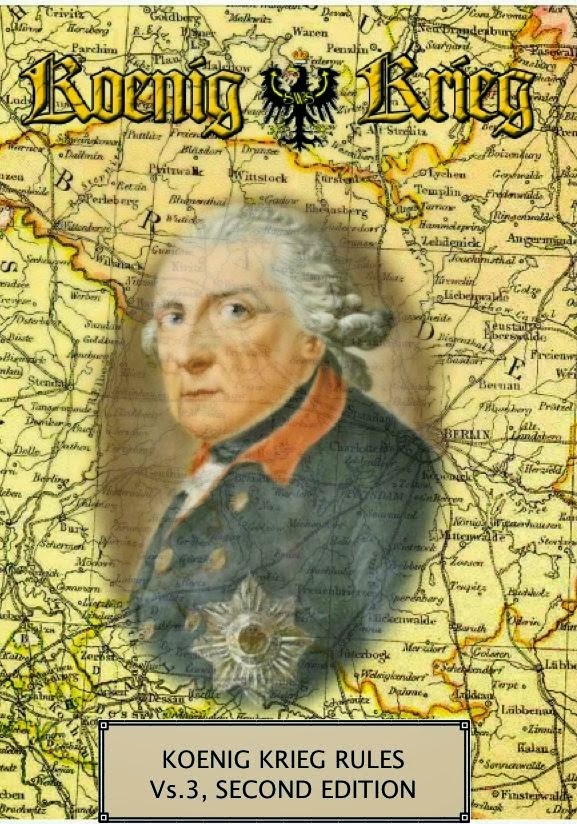 The last time we played with these rules was back in September 2013, so needless to say we were a bit "ring rusty" when we got going, and some of us had never played the rules at all. If you want to get a better idea about them then follow the link to our previous game where Steve H posted a bit of an overview.
http://devonwargames.blogspot.co.uk/2013/09/seven-years-war-koenig-krieg.html

One of the principle drivers in the rules is the gaining of the initiative and using it to do something with your units immediately or to force your opponent to commit to an action before they necessarily would have chosen to do so. Actions are therefore not simultaneous and the classic situation is to fire before your opponent thus hopefully inflicting casualties that reduce the return fire, or to force an opponent to use his initiative with a force that allows you to approach to a closer range without interference.

In this battle the Allies were plus one on a d6 roll vs the French straight d6, giving the Allies a slight advantage.

As you can see in the picture above, the two sides faced each other across couple of valleys one with a town in the centre the others on each flank being broken with woods on the valley floor.

The French on the left of picture chose to keep their better Swiss infantry in reserve, with the Grenadier brigade nearest to camera, their basic French infantry and levies in the centre forming two brigades and their Foreign allied brigade further along, As with the Allies the French massed their cavalry on their left flank facing off against their Allied counterparts.


The terrain caused both armies to choose a similar deployment. The interest in the game developed as the two armies wrestled to gain the upper hand in different sectors of the battle. The choices made in the initial deployment started to influence the success gained, or not, as the game went on.

The only off table reserve force was held by the French, looking for an opportunity to force an advantage in the town sectors or to support an attack on the Allied left flank using the next best brigade in the French army, the Grenadiers.

The beginning of the battle saw the two armies seeking to grab a terrain advantage in the centre table area. The town sectors and hills gave advantages in protection and combat and became valuable pieces of real estate.

The French despite their initiative disadvantage managed to make good use of their successes by doubling up to the town and grabbing two thirds of the buildings, and their cavalry getting the best views out over the lower lying land.

The Allied force had mixed success in the early clashes with their cavalry winning the first melees and pushing the French off their hills.

The Hanoverian Guards sent into contest the town leaving their lower quality line comrades to defend in the open, had a torrid time as French guns and line infantry occupying more of the buildings poured on a withering fire that wore down the large elite battalions as the game progressed. The French were then moving fresh infantry into the towns to relieve damaged units and thus keep up the attrition.


The Allies sought to take advantage of their early success with their cavalry, by following up with the British infantry and break the Foreign brigade in the French centre.

Unfortunately the French grabbed the initiative pouring in galling cannon and infantry fire onto the British line and disrupting their attack.


In addition the French cavalry started to win a few melees and cause the French left to stabilise just as the French Grenadiers and Swiss Line started to develop their attack to the right of the town.


French artillery played on the four battalions of Hanoverian line infantry, causing casualties on two of them as the eight battalions of Franco Swiss infantry closed on them. Meanwhile the fighting in the town was swinging to the French line infantry and with a rousing cheer the French charged in a bayoneted the surviving Hanoverian Guardsmen, clearing the sector nearest the French Grenadiers of Allied Infantry.

However it all proved too little too late as the janitor was threatening to lock us in and I had to get back to cook tea.

So based on the final situation who do you think would have grabbed the battle honour had we been able to play on?

Thanks to Mr Steve for bringing his figures along and running the game, or should that be "herding cats"? Also thanks to Ian, Steve L, Nick and Tom for playing.
Posted by carojon at 18:56