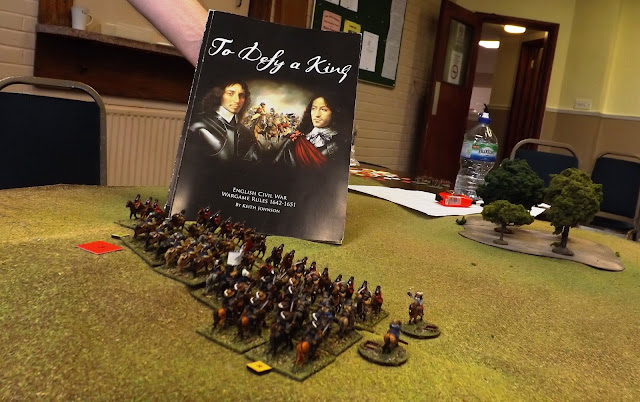 One of the three games staged at this month's Devon Wargames meeting was a late English Civil War clash between a Scots army bent on crossing the border and joining with compatriots to the the south, which would eventually culminate in the Battle of Worcester, and a New Model army sent to prevent their progress.

The resultant clash of the two forces was set up as a meeting engagement somewhere on the borders, hence the rolling open terrain interspersed with light woods, boggy ground and a north-south road from which the two armies had shaken out into battle formation.

The collection of figures is Mr Steve's growing host of 15mm figures from various manufacturers including Minifigs, Peter Pig and even a few classic Mike's Models. The rules were a set Steve and I first encountered at Attack in Devizes a couple of years ago, "To Defy a King" and was only our second go at them, which proves they must have ticked a box to make it through to the "lets have another go at them" stage of rule playing. My part of the days festivities was to provide the terrain, command the Scots and was ably supported by Steve M who led the New Model.

Steve did the army selection using the process set out in the rules, which for me is one of the big stand outs with these rules.

The armies during the English Civil War were very non standard one to another and the quality and training could be very different according to year and locality. The establishment by Parliament of the foundations of a professional English army, namely the New Model Army was a major step to eradicating that huge variability.

The rules seek to model this in a rather pleasing way that moves away from the lists by year and points costs, standard approach and instead generates forces in a much more variable process that produces forces that an army commander might well have had to make do with rather than what he would have chosen. It reminds me of the old Gilder system of writing brigade cards of various sized units and quality and then drawing a number of cards to suit the size of game and getting on with the force you have drawn.

Thus the forces deployed were quite different one to another with the Scots, the larger of the forces, having two infantry brigades of four and three regiments, all of different strengths and quality and two cavalry brigades like wise. The Scots ended up with some very large veteran units of infantry and cavalry which would prove a challenge to the New Model.

The New Model deployed an infantry brigade of five regiments (two small veterans and three larger trained) and two cavalry brigades, as with the Scots, one on each flank. The problem for the New Model at this period was that their officer cadre was not as good as in previous times with many of the best having quit the service. Their troops however were formidable.

You will see that we dispensed with artillery this time around as we were deploying off the march and moving to contact. The artillery in this period was not very mobile and quite feeble and we decided to dispense with its use (you can imagine it limbered up on the roads behind waiting to move on) and cut to the chase with the more mobile elements of infantry and cavalry.

For a more detailed coverage of unit capabilities you might want to follow the link above to previous games reported here on the DWG and links to the 'To Defy a King' web page that links to more explanations and the rules forum.

So with both lines deployed we were off with the initiative changing from move to move but with the Scots getting a hold of it for several key moves as the lines started to close.

The problem facing the Scots as they sought to advance on the New Model and exit the table from their lines was that the terrain of open woods and boggy ground interfered with the movement of large bodies of troops. Oh dear, how sad, never mind.

The worst effects of the terrain were suffered by the Scots cavalry on the right flank who emerged from a wood in disorder and were unable to reform before being caught by their New Model opposition and forced to fight very much at a disadvantage.

On the Scots left the weaker cavalry brigade sought to take advantage of a hill top position to fight the New Model cavalry and the veteran Scots regiment to the front, though greatly outnumbered managed with the support of a raw unit of pistol cavalry hold up the combat for most of the game before routing away at game end. (I have covered this combat in more detail towards the end of this post.)

As the cavalry got stuck in, the Scots infantry methodically closed on their opposites and clenched their buttocks as the New Model troops prepared to deliver their fierce, Swedish style, volley fire. This however, through rather unfortunate dice rolling proved fairly ineffectual.

The Scots let out their battle cry and charged in pushing the New Model trained line back in the centre as their veteran infantry held firm on the flanks.

The fighting for this period seems well modelled by these rules as it takes a series of combat wins and push backs to cause units to break and thus the combats generated took multiple moves before we could see where the momentum was favouring one side or the other.

This got quite interesting on the Scots right as their cavalry, caught disordered, suffered initially but through a combination of fortuitous dice rolling and eventual support from comrades in the rear started to reverse the combat.

Both sides were liberal in throwing in commanders to the combats and these rules are quite deadly when casualties are dolled out and commanders have to test for being caught up in the fighting, having a 50:50 chance of getting wounded or killed outright.

As the battle reached its climax or rather the day came to an end with the bar beckoning, the Scots infantry looked likely to force a break in the New Model lines but with their cavalry beaten on the left flank and New Model cavalry pinning the Scots right it was doubtful if the Caledonians could have forced the situation and the New Model would probably have lived to fight another day, leaving the Scots somewhat chastened by the experience.

So what are my impressions of these rules?
There is something about "To Defy a King" that is really appealing and I think it is the feel of the period expressed in the design, together with the army generation that really captures my imagination. I like them even though my appreciation is tempered with a frustration that they are a set of rules not quite finished in the clarity of the explanation and meaning of particular rules.

This was highlighted in the previous game when we couldn't divine how a particular cavalry combat should be resolved and a question to the forum generated a reply that suggested the players should decide on their own resolution.

That is all well and dandy, but requires a significant investment in time between friends to agree a common house rule on the situations where these considerations crop up. You would hope that rigorous play-testing prior to publication would have ironed out these seemingly straightforward situations beforehand.

This particular game threw up another situation when a Scots cavalry brigade changed their orders from advance to hold, seeking to hold the hill they were tasked with controlling.

With one unit forward and the other close behind in support, they were charged uphill by the enemy. The front unit was able to counter-charge taking advantage of their uphill position, but the other unit was not permitted to advance in its move phase to occupy the previous position held by its comrades (so not moving any further forward than when the hold order was actioned) and thus maintain support range because the brigade, had "hold" orders!

The rules seem unclear as to whether we are applying brigade or unit orders as the implications of a hold order implies that a supporting unit of cavalry could not move forward in support of a combat being fought in the position its brigade was ordered to hold, namely the hill, after the lead unit had counter-charged enemy cavalry attacking up the hill. Why? Because a hold order prohibits the unit from doing so. This implies a hold order, literally means 'don't move forward' even if that movement doesn't take you away from the position the brigade is to hold, which seems a bit daft.

An example of what I think a 'Hold' would look like might be:
• Defend/Hold
Attempt to hold current positions. You may return fire, but may not charge/attack enemy unless
in compulsory pursuit, have an attached officer, are mounted or wishing to perform a counter-charge.

Thus with the example orders above, the unit could support by manoeuvring accordingly, within its current position.

Surely a brigade commander should be able to fight his brigade as he chooses, within pre-defined limitations, provided he does not take his brigade away from the position it has been tasked to, in this case, hold. Thus on repelling an attack he would be forced to rein in and fall back to his position.

The rules seem to imply a much greater limitation in the ability of the units to manoeuvre and initiate combat against units attacking the position they are on or in.

I say seem, in that this is our second go with these rules at club and the last time was few months previous, so perhaps we have got the wrong end of the stick. Mr Steve has tasked himself to see if we can get some clarification.

The situation outlined and the previous one are not unsurmountable to a house-rule revision and agreement but it is a frustration that these situations are not better defined.


So there we are, another interesting game of To Defy a King which produced a very good little set too with two very different armies. Steve has plans to produce courier figures to better represent the position of orders moving between commanders along with the other markers mentioned and has produced a lovely looking collection.

Thanks to Steve M and Mr Steve for a very entertaining afternoon back in the 17th Century. I look forward to the feedback from the forum.
Posted by carojon at 15:23