Augustus to Aurelian - Battle on the River Visurgis 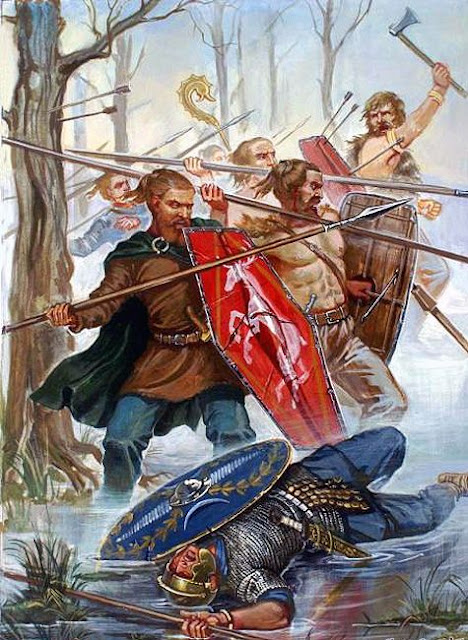 This month Mr Steve dug out his 15mm Roman and German collection to play a second test game of Augustus to Aurelian by Phil Hendry.

The last scenario played was very much on the Germans home turf and the warbands made full use of the forest terrain to take it to the Roman foe.

In this test I chose a scenario published by Phil Hendry in the Lardies Summer Special 2013 where Phil had the Roman forces taking on a British army defending a tidal river crossing. The Romans have split their force sending off a powerful left flanking force of legionaries and a right flank group of mixed cavalry.

The Romans are tasked with getting across the river with their auxiliaries and reinforcements whilst the water is relatively low, but with the threat of the waters rising at some stage whilst not being certain as to when their flanking forces will turn up. The Germans with their full force have the opportunity of taking on the Romans piecemeal but in relatively open ground that may favour Roman tactics.

The Britons were replaced with Germans and the Romans Imperials with Steve's Republicans, but this is after all a play-test and the scenario produced a really interesting game. 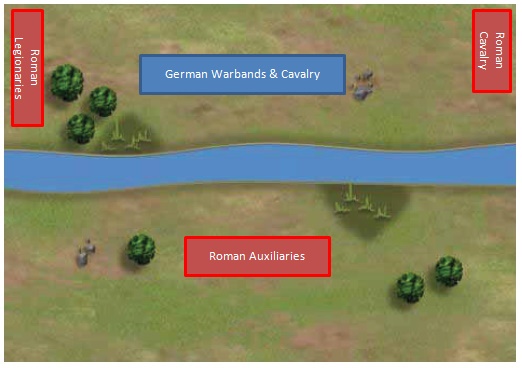 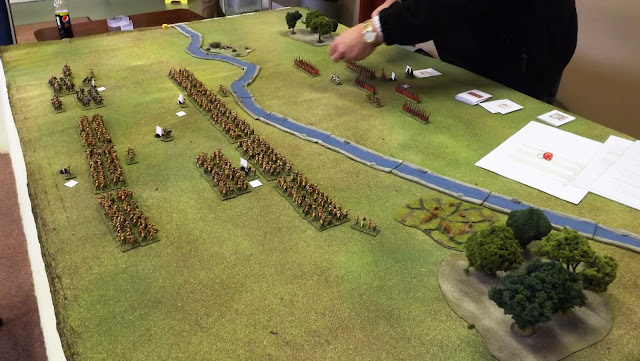 The river is deemed to be fordable between the two areas of marshy scrub seen at either end of the opposite banks and was currently deemed to be 'difficult terrain' causing the Roman formed units to cross it at half speed.

In anticipation of the Roman advance five German warbands with one in support are doing the 'Dirty Harry maneuverer' and have pressed up to the river bank and with shouts of abuse and clashing weapons on shields goading the silent Roman line to try their luck - the classic "well do you feel lucky punk?" tactic. 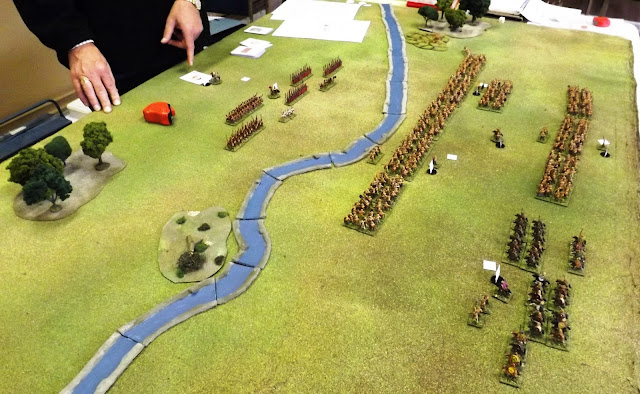 This is our second game using the rules which we played back in January this year and after a bit of time taken sorting out the card deck which activates the various divisions and takes care of when specific events will occur and the placing of markers to identify the various commanders we were quickly into the sequence of the game and play flowed along very seamlessly.

For those not familiar with these rules, they display influences from various other rule sets out their for playing ancients, with the addition of the card activation system favoured in other Lardy rule systems which really capture the friction of battle so well.

The use of unit and commander attributes together with special abilities are a very familiar idea as is the splitting of units up into divisions under a commander and I have attached pictures of the orders of battle sheets to illustrate how we kept a note of who was who and what they could do.


The individual unit stats are straight forward with the size of the unit indicated as Tiny (T) through to Large (L) indicating the number of figures in the unit and the 'footprint' it makes. Movement rate is in inches for 28mm or as we played centimetres for 15mm.

Combat Dice - the number of d10 rolled when in hand to hand (note there can be additions to this such as Romans using the gladius can get an extra die).
Combat Attack - the measure of how good the unit is in hand to hand, the higher the better with a d10 roll equal to or under plus factors required to score hits.
Shooting Dice and Shooting Attack work similarly to the Combat Factors except for missile fire.
Outlook (Training) - Indicates how up for the fight the unit is and added to casualties the unit inflicts in hand to hand versus what the opposition inflicts together with their outlook sets up a comparison to determine who has won the combat. Again the higher the better.
Rating (Morale) the number used to roll against, including plus or minus factors, when reacting to events with a need to roll equal to it or lower to pass a Reaction Test.

The Armour, Weapons and Special Rules indicate where the unit can claim extra benefits to its normal stats, with for example Romans having Pilum that can cause additional hits in hand to hand combat. 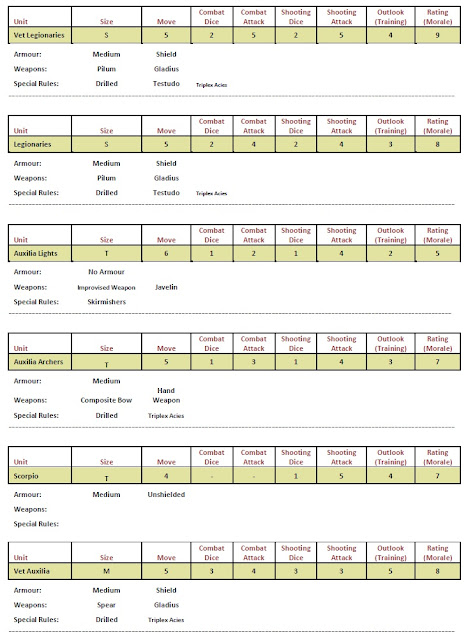 So with the opposing forces set up and off table reinforcements sorted out, Legatus Metellus ordered his auxiliary infantry forward preceded by his skirmish screen of javelin-men and slingers who started to pepper the German line with deadly accuracy causing the first casualties In response the German skirmishers ran forward aiming to return the compliment with interest only to find their ability to hit the Roman infantry less effective than their opposing counterparts. 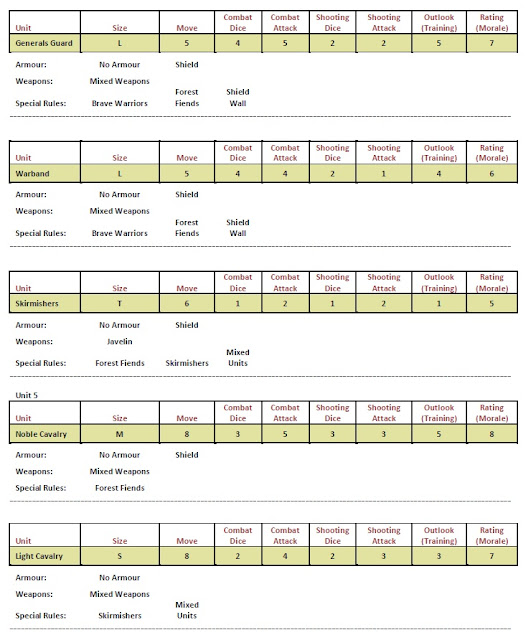 Valwerd the German commander was well aware of how able and likely the Romans were to attempt to outflank his position here on the upper reaches of the Visurgis deep within the territory of the Langobardi but was confident he could take the fight to this small force of Romans and pin them back into the river whose tidal flow was dramatic at this part of it and likely to destroy any units caught in it at the full flood.

Nevertheless he cautiously held a second line of warbands in reserve, including his personal guard together with his cavalry to enable him to react to any potential threat to his positions from another direction.

With the initial skirmish battle well and truly joined the first auxiliary cohorts tramped into the relatively shallow water taking their time to maintain formation and avoid slipping on the unseen rocks and boulders littering the river bed; whilst endeavouring to shelter behind their scutums under an ever increasing hail of missiles directed toward them.

Every now and then an unfortunate comrade would let out a despairing cry and fall into the waters as a German javelin found its mark with the yells of the centurions and optios calling out the orders to close up and maintain the line.

With the opposing lines closing rapidly the need to maintain order and react to the enemy began to cause pressure particularly in German ranks. The right flank Roman auxiliary cohort had suffered under the German javelins and Cahallra the commander tried to order his warband to charge in whilst the enemy struggled to reach the opposite bank.

Tribune Decianus aware of the need to hit the German line with a charge and knowing his auxiliaries didn't carry pilum got the drop first and his line left the river crashing into the German shield wall with spears thrusting into the opposing ranks. 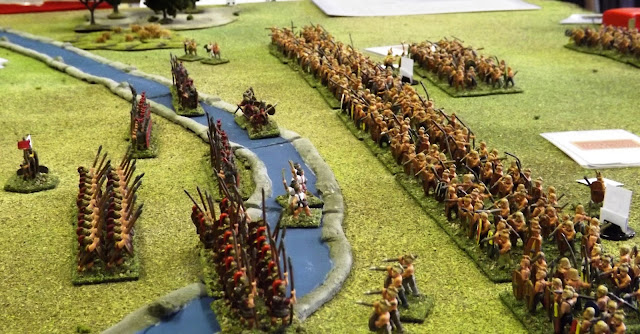 With the heavier infantry locked in mortal combat, the opposing skirmish lines fell off to the flanks to continue their jousting as the the two lines commenced a push of shields.

The Romans grabbed the advantage on their left but were losing on the right most part of the line. Decianus displayed his lack of experience by not ordering his reserve cohort through the ranks of those hard pressed troops to their front, but was saved from embarrassment by the lead cohort reacting to their defeat by coolly withdrawing through the ranks of their supports who were able to take up the fight as a fresh unit.

(Note an extraordinarily low die roll with two d6 converted what seemed like an inevitable rout into a full move withdrawal facing the enemy; and avoided the reserve cohort from having to react to routers passing through them - junior officers save the blushes of their more senior commanders yet again).

The battle on the river was in full swing with the waters steadily rising and with the Germans getting stuck into their task.

Suddenly trumpets blared and Praefectus Superstes a veteran commander of many seasons lead his veteran legionaries onto the Field of Mars just at the right moment.

As if to emphasise it was time for Valwerd to get his hat and coat, Roman cavalry under Tribune Valens wheeled into line on the German left flank in the next turn.

The arrival of the Roman flank marchers couldn't have arrived more opportunely as the German commander contemplated settling the battle on the river by throwing in elements from his second line.

With the arrival of the newcomers there was a flurry of movement among the German commanders as new orders were hurriedly issued and units repositioned to contest the advance from the flanks.

Meanwhile on the river both commanders were throwing in their 'Carpe Diem' cards as they attempted to get every advantage going in the hand to hand fighting; with the auxiliary infantry getting stuck in with gladius in the second round of combat bestowing an extra d10 to reflect their handiness with the deadly short sword against their unarmoured opponents.

However it was left to Superstes legionaries to demonstrate how to combine the use of pilum with the gladius as they positively seemed to be licking their lips as the German line turned to greet their approach.

Superstes dispensed with any attempt at maintaining a reserve line as, preceded by skirmish javelins and Scorpio bolts, his four small legionary cohorts unleashed a hail of pilum as they charged into two large German warbands. The right most warband evaporated under the assault in the first round with the second left flank unit struggling to stay in the fight and getting pushed back on its supports but now with two victorious legionary cohorts hovering on its unprotected flank.

As the Roman cavalry acted as a threat to the German left flank and prevented the German cavalry from swinging in on the auxiliaries still fighting hard on the river, the waters rose inexorably higher providing some respite to the Germans as one auxiliary cohort was swept away in the flood and both Metellus and Decianus were left stranded on the opposite bank only able to observe the battle on the opposite side.

We ended the play test there with Roman fortunes on the high rather like the River Visurgis but with some interesting command and control issues to attend to.

The game rolled along really well and we were soon rattling through the moves as the factors and processes became more familiar, which is always a good sign. I really like the use of cards to control the play and the 'Carpe Diem' cards really allow the players a modicum of control which gradually dissipates as the battle unfolds, just as it should.

Play tests always reveal some issues that need resolving and I am happy with changes made from the previous game including the more concise orders of battle and unit stat sheets, but need to think about some combat resolution ideas when fighting with multiple units of differing quality, together with improved and additional markers.

I really like the look of the game these rules produce and am now confirmed in using them for my Dacian Wars collection of 28mm figures with the anticipation of the release of the new Victrix plastic legionaries, hopefully next month.

Thanks to Mr Steve for providing his figures to stand in for my lack of armies at present so I could work out if these rules would fit the bill and to him, Nick, Steve L, Ian for playing a very entertaining game.