Pickett's Charge - A View from the Front 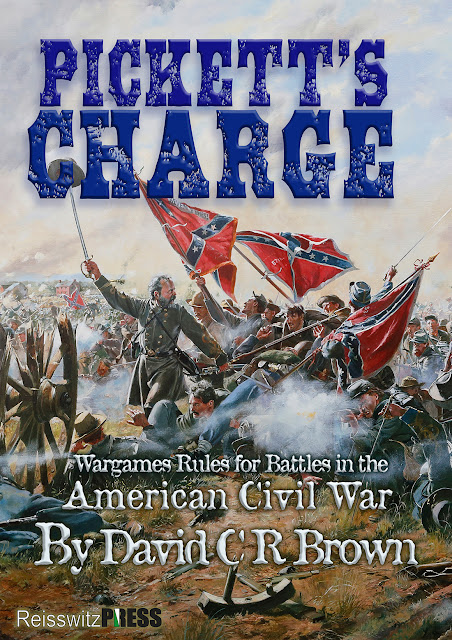 Editor JJ Comment - Following on from the game report posted, Battle of Antietam/Sharpesburg - Pickett's Charge,  fellow DWG member Mr Steve L, not to be confused with "Mr Steve", sent me his thoughts about the rules and how they play and so for completeness and to add comment to what are a still relatively new set of rules to most of us they are posted here for your information.

As an aside to Simon's report I would like to add my 'two penneth worth' about the rules. This is based on first impressions.

I am not going to go into all the mechanics of the rules as then I would have to copy whole sections and that would infringe copyright laws. Buy your own copy.

These rules are all about Command and Control and Morale. You have ADC’s who job it is to take orders to brigade commanders. These are diced for to see if you get them and then to see if they get to give the order. Certain jobs require more than one ADC so allocation of them is critical. Allocate too many to one job and another can’t be done, so beware. All of this is done concurrently.

After the allocation of orders you then dice for initiative. The winner then becomes the “Phasing” player and the loser the “Non Phasing” player. Why? Because in this PC world, everybody is a winner remember!

The phasing player then does everything first.

Charges are declared and supports are allocated by the phasing player. Only cavalry can counter charge just like in a lot of rules. Both sides then dice, adjusted by the modifiers and then do what the results table says. Only on a draw does melee actually occur. Only once in our game did that happen. The non-phasing player now does his charges. Now I like a good melee so I may have a house rule so that + or – 1 also results in a melee I will have to think about that.
(Editor JJ Comment - I guess it rather depends what 'melee' means. Actual bayonet crossing and hand to hand fighting in the open was comparatively rare with one side usually breaking and running before it came to that. Perhaps that it what the author is attempting to model)

We are now into the movement phase. This is pretty obvious. There is a table of movement distances and in certain circumstances you will need to dice to make sure you can move and to see if you remain formed, change formation or going over certain ground for example. This is where I come to another possible house rule. I will look at moving normally until interdicted by enemy fire. This may be artillery or infantry depending on terrain.

Firing is nice and neat. Check the range then dice. Add/subtract the modifiers then reference the casualty tables.

Casualties from all combat are allocated to the target. You can record these using the forms provided or various stands in as Simon used. The number four is important and this number denotes when you move down in effectiveness. Just like in Fire & Fury (F&F). However in this game no stands are removed. For casualty read morale as it is assumed that people are not just dead or wounded but there are tired shocked soldiers as well. At a certain point, depending on the size of unit, the unit will disperse.


There is much more to these rules than I wish to write about at this point so you will need to try them yourselves.

The rules include a point system so you can build your own units and try and get a balance when playing attack/defence games. I actually checked the points for the game we played had it been in full and as per the rules and the Confederates actually had more points than the Unions by about a hundred.

After only one game I will say that I can compare them favourably with F&F. I will be playing them a few more times with different people and gathering their views. A lot of problems I find with new rules are that we often go into it with fixed views based upon other rule sets and we can be quite biased. In my opinion this is because we inherently don’t like change. At this point a strong 7/10.

I will post another report and more views as we play and introduce more of the optional rules.

My next game will be on mirrored terrain and with mirrored troops. I just want to make sure that the rules are not favouring one side or the other. The results should be based upon dicing ability only and better generalship not on rule bias.

After that it’s making sides based upon the points system so a lot of gaming still to be done. It’s a dirty old job but I will do this for the greater good of my fellow wargamers.