Kiss me Hardy in the Indian Ocean 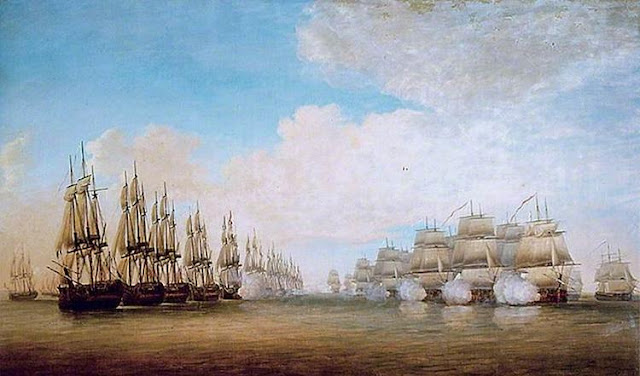 How better way to start the new year and new season of wargaming here at the Devon Wargames Group than getting some well needed winter sun and setting sail for the deep blue waters of the Indian Ocean in the year 1782.

I have plans for developing my Age of Sail collection going forward with ideas of focusing on the naval conflict that developed during the American War of Independence.

I find this period more interesting than the early nineteenth century that tends to be the favourite of most wargamers in that it saw the Royal Navy rise up from a period of stagnation and mixed competency, following the victories of the Seven Years War to become the overwhelming power that it would be in the following century with a corresponding leap in tactics and technology from Admiral Rodney, mentor to Lord Nelson, braking the French line at the Battle of the Saintes, to the introduction of copper sheathing and carronades.

My initial collection of ships has been built to model the fleets of Admirals Suffren and Hughes who battled for supremacy and bargaining chips in the Indian Ocean in the last years of the American War of Independence that had by then become a global conflict. 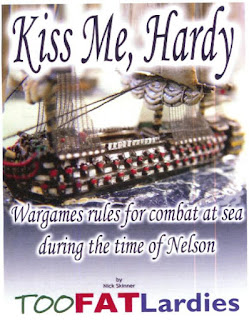 Some of the chaps were keen to play Kiss Me Hardy (KMH), the Age of Sail rules from the Too Fat Lardies and so I dug out my cards and gaming paraphernalia together with the ships and threw together a scenario loosely based on the Battle of Sadras 1782 which sees a French fleet of one heavy and one light squadron bearing down on a similarly sized British fleet having caught the British admiral at a disadvantage down wind and having to bear up in line to fend off the advancing French.


As well as using the standard rules and card deck I decided to incorporate Nick Skinner's thoughts on Admirals, Command and Control and Signalling covered in his article "I wish to amuse the fleet" in the Winter 2009 Special.

Command and control during this period was dominated by the line of battle and the development of tactics and signals to allow admirals to better command the ships at their disposal.

I am often amused at the  recent developments in Age of Sail rule sets that treat these ships and fleets rather like WWI aircraft where the individual ships happily sail in amongst the enemy and dogfight with each other without any consideration of the strict rules of engagement that the commanders of multiple ships were forced to operate under, for very good reasons. 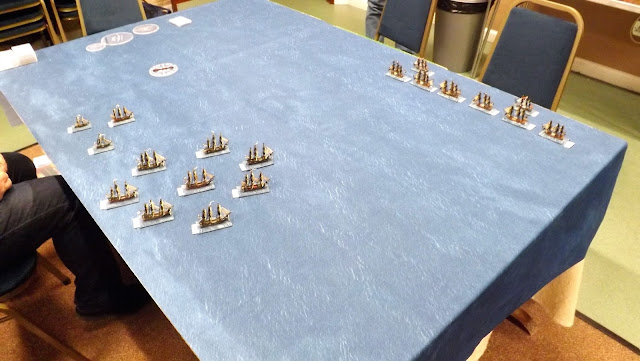 These fleets and their commanders did not operate as a group of frigate captains, making individual decisions on where to point their ships, but were forced under very strict rules of engagement to fight as ordered by the most senior man on the spot who, not having the helicopter like view that a wargamer enjoys, tried to make sense of what was happening and relied on his relay frigates to repeat his flag signals throughout his fleet to get control of the battle.

This aspect may frustrate many wargamers who like to be able to do things when they choose in the order they desire, but if like me and others you are interested in exploring why these battles weren't fought like many games portray them, then a little frustration is well worth it if you gain a better understanding of why Admiral Graves failed to fight his way into Chesapeake Bay and why Rodney's victory at the Saintes eight months later was so dramatic in the developments of tactics and thinking. Not only that but a greater satisfaction at overcoming those difficulties and triumphing in the face of them only adds to the pleasure of the game.


I have put together a pdf of the scenario briefings together with the individual 'ship stats.' should others wish to have a go and will make them available on my personal blog, JJ's Wargames for download.


So to our game which, as well as inviting the players to get their heads around thinking ahead so as to signal the fleet accordingly, we also incorporated the "admiral/captains purse" procedure where the respective commanders were invited to roll two d10 and use the points generated to improve the ships which I had randomly created from the guide within the rules.


This is a really clever way of simulating the likely training that the commanders of the squadrons and fleets would have conducted at sea on their way to the theatre they would operate in, not to mention having the ships under their command repaired and fitted out to their liking within bounds prior to going to sea.

Thus for example you could push the budget by spending 5 points to improve the sailing qualities of one ship or for 2 points train a crew up to be 'fervently determined' making them more likely to fight on than strike their colours. 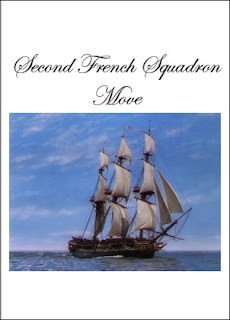 As part of the command and control aspects I rewarded the French admiral's better command profile by giving the French two 'Commander's Signal' cards within the deck as opposed to just one for the British admiral.

The war in the Indian Ocean presented commanders with theatre-specific concerns in that casualties to crews were much more difficult to replace due to the fleets operating in a back water theatre and this fact together with the great reluctance of crews to surrender and face a death sentence in a prison camp on the Indian mainland, meant that both fleets tended to shoot into the hull than try to dis-mast and disable their opponents. Thus all firing was assumed to be at the hull.


With both commands set up and happy with their respective squadrons agreed, each having two, one of ships of the line and one light squadron, we shuffled the cards and began play with the scenario representing the afternoon of battle and thus just twelve turns for the respective sides to drive a result.


Suddenly aware of this potential threat the British admiral signalled his line to turn in column with the wind to double back on the French looking to protect the rear most ships. 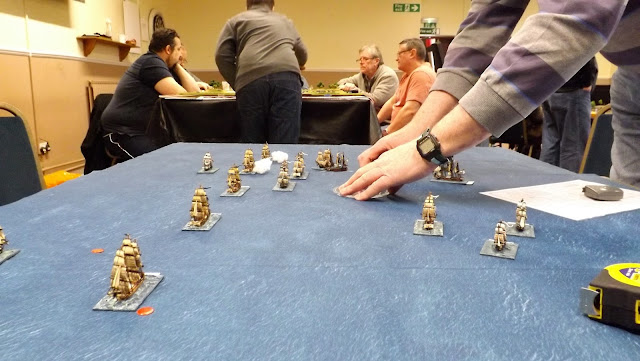 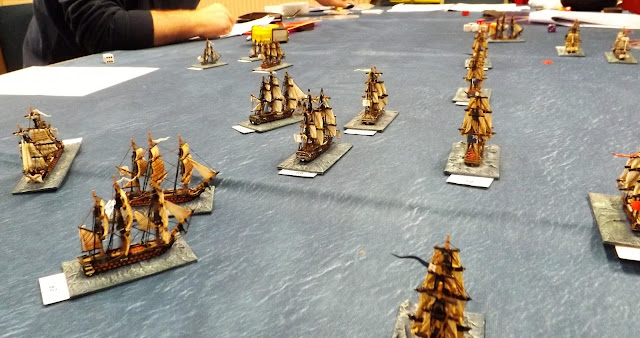 
However when the French return broadsides erupted the French fire proved equally destructive and HMS Monmouth's foremast shuddered under the fire before toppling with the wind onto the starboard bow. 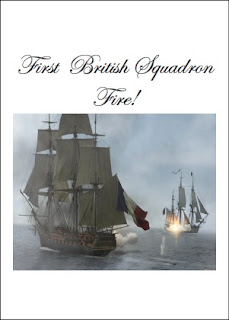 The better ship sailing qualities then came to the rescue of the two most rearward British ships as the French vessels trying to get around their rear only managed a few medium range shots before the British managed to extend the range and then the French managed to mess up their tack to get on a parallel course thus allowing the British to extend the distance still further.


As Monmouth and Inflexible battled it out with four French opponents gradually getting the worst of the exchange but giving a good account of themselves in the process the van of the British line turned with the wind accompanied by the two frigates to head back and help their hard pressed comrades.


With the French 40 gun frigate Cleopatre leading her two consorts La Subtile 24 and La Sylphide 20 towards the now struck Monmouth and badly damaged Inflexible, a race developed between the opposing light squadrons to reach the two battered British 64's first.


However the prompt signal to altar course by the British now offered some hope of preventing the French from capitalising on their early success as the Flagship HMS Superb 74 accompanied by HMS Gibraltar 80 and HMS Eagle 64 started to come up on the French van with the British admiral signalling "to engage the enemy more closely" thus moving into short range. 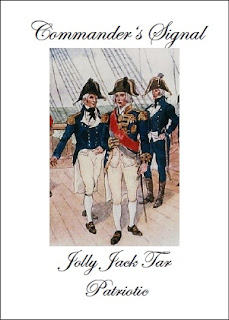 The three British ships opened up a devastating initial broadside, leaving the French flagship Heros battered and forced to drop out of the line, also leaving Admiral Suffren badly wounded, and thus removing the extra command card from the deck.


With just two turns remaining the light ships raced towards the British line with the British 36 gun frigate Juno getting to the struck Monmouth first and managing to throw a tow line aboard causing the French Cleopatre to fire off a despairing bow chaser that caused little damage. 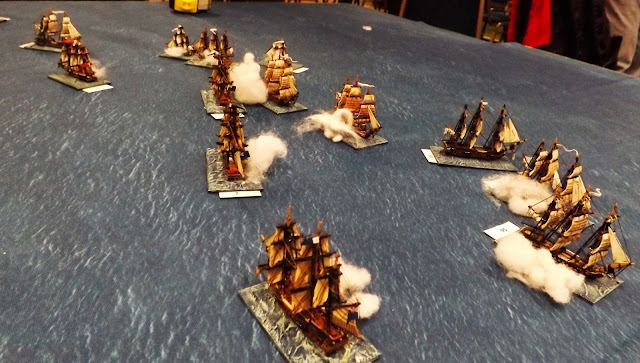 The final turn saw the opposing fleets pass on now opposite courses as the light started to fade and the respective commands prepared to break off.

The last exchanges of gunfire saw the French get a critical hit on the British flagship Superb causing a fire aboard and additional hull damage, but with the British now in a position to prevent the capture of their damaged ships. 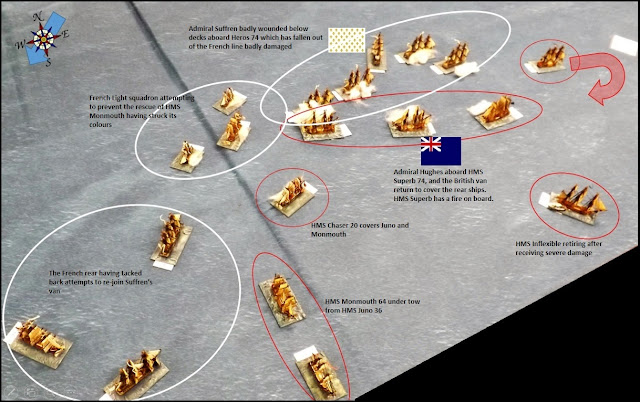 The final picture shows the two fleets as the action closed, with the battle judged to be a marginal French victory based on the damage caused to the British ships, all be it finely balanced with the wounding of Suffren and the likely impact of one of his less able subordinates taking command of the French fleet.

KMH played well and gave a very entertaining game with the command rules working seamlessly with the core rule set. I really like the way they play, but have reservations on using them to play larger games as I feel they like many of the other widely used rule sets, they try to straddle the lower and higher command roles.

That is to say the rules incorporate all the detail you would want for ship to ship actions but that level of detail becomes rather laborious when playing as an Admiral of say three or four squadrons in a fleet.

With the additional cards controlling movement for ship to ship engagements I think KMH would still be a rule set of choice, but for the larger games I have in mind, I think I might have found a more appropriate set to use, more anon.

Thanks to Nick, Jack, Ian and Bob for producing a very entertaining afternoon and to Steve L for the loan of his very nice Tiny Wargames sea mat which only added to the fun.
Posted by carojon at 16:20