Black Hawk Down - Force on Force, Day of the Rangers 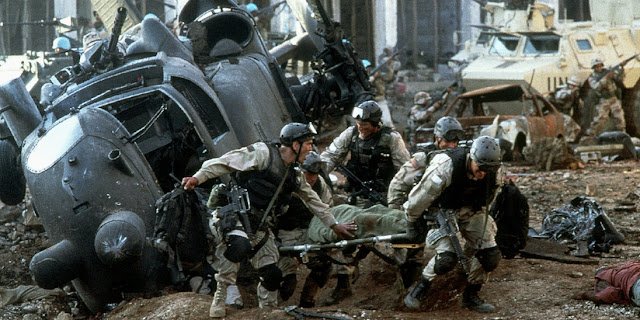 Today Chas took us back to his time in General Aidid's militia. Specifically the events surrounding the downing of an American Black Hawk and the attempts by the "Yankee Dogs", to rescue the captured aircrew and destroy the secret 1990's technology onboard the helicopter (think something considerably less capable than the phone in your pocket and you won't be far wrong). 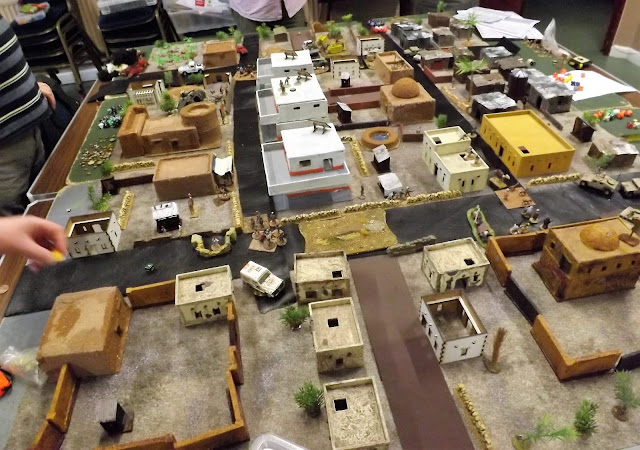 Bob & Steve H took the part of the local defence forces (or paid gunmen hyped up on drugs, depending on your view point) and myself, Charlie & Mark were the foreign aggressors (or heroic forces of freedom). 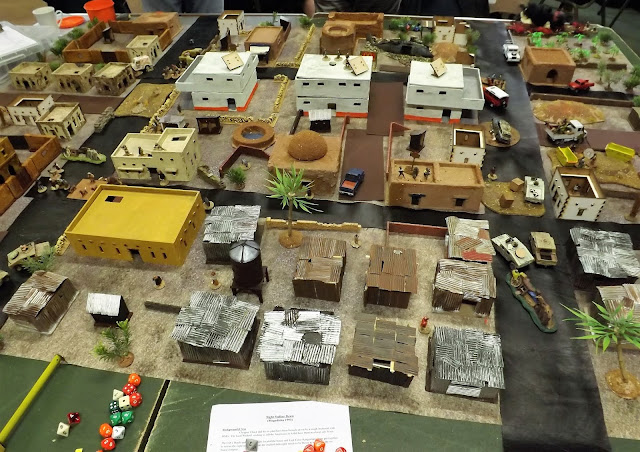 Mark commanded four CIA Operators who were watching the building where the aircrew were being held and a squad of Delta Force soldiers, who would carry out the rescue operation. Charlie & I each had a column of three Humvees, entering town on parallel roads. Each convoy consisted of a stick of Rangers in two gun Humvees (mounting 50 cals) and an unarmed Cargo Humvee. Our task was to pick up the rescue team and the hostages. 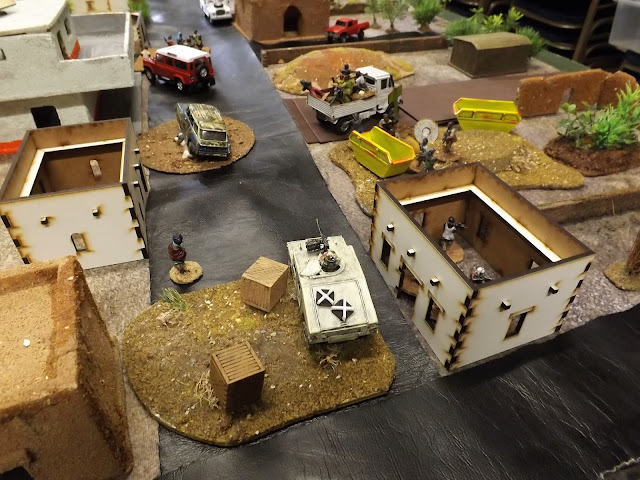 The game opened with the CIA Operators calling in 2 "Little Bird" helicopters and the Delta teams fast roping from them onto the roof of the target building. Needless to say, this generated considerable interest among the locals.

With militia taking up firing positions, the CIA men gave effective covering fire and dropped a number of fighters. Despite this, a Little Bird was hit and had to head for base, but not before the Delta teams made it to the roof. 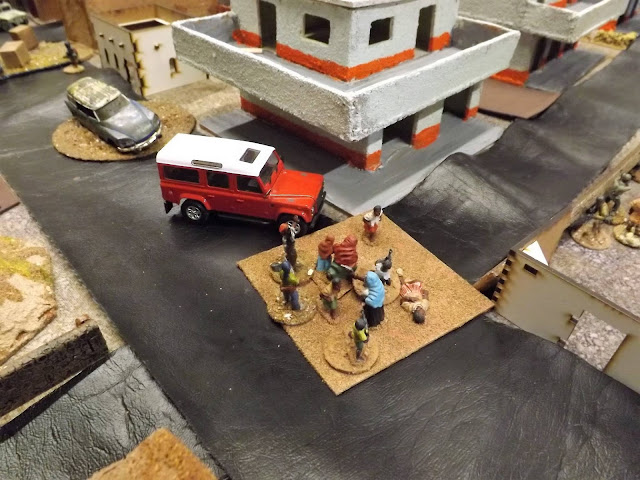 With the sound of firing, Ranger Command signalled the Humvee columns to head into town. My column had not gone far, before local gunmen were spotted. "Targets left 200 metres, engaging"
screamed the gunners and the 50 cals gave them the good news, suppressing the mob, as RPGs fired
wildly at the vehicles.

Charlie's column was making better progress, suppressing targets as they appeared and one Ranger team debussed in front of a compound. The breaching charges set, they waited for the bang and nothing happened. "What the ****. I thought you were a demolition expert ?" the team leader shouted. 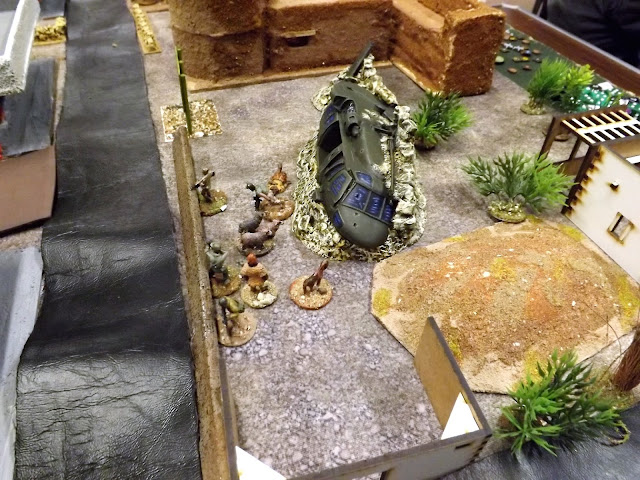 With Delta teams on the roof, the guards in the target building pushed the hostages in front of them into the street. In the confusion, no Delta or CIA man had a clear shot and the hostages were hustled off into an alley.

With the prisoners on the move, a fire fight developed between Delta troops and Somalia militia. When a technical mounting an HMG joined in, a Little Bird joined the party and its minigun spoke and settled the argument. 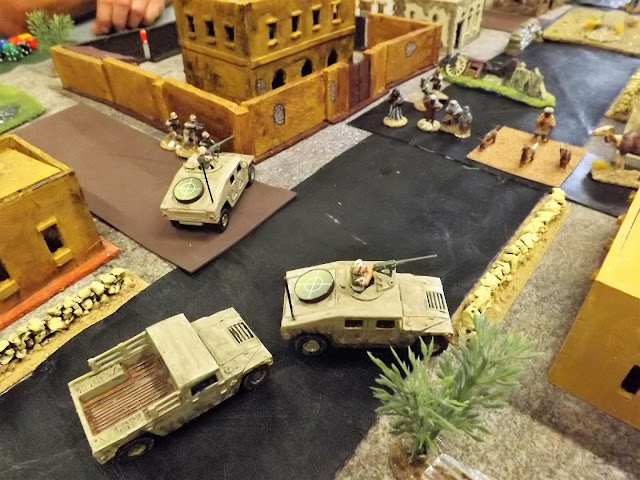 The Delta teams set off in pursuit of the aircrew, as the CIA Operators blew up the wreck of the crashed Black Hawk.

Meanwhile my convoy was in some difficulty. The 50 cals on the Humvees were firing in long bursts at targets all over the place. A technical joined in the fire at my vehicles, as RPG rounds and continuous small arms fire, made further progress unwise. Then an RPG round blew off one of the 50 cal mounts and the other gun Humvee had a tyre shot to shreds. The writing was on the wall and the drivers slung their machines into reverse. Racing backwards. we were pursued by the jeers of militia men. 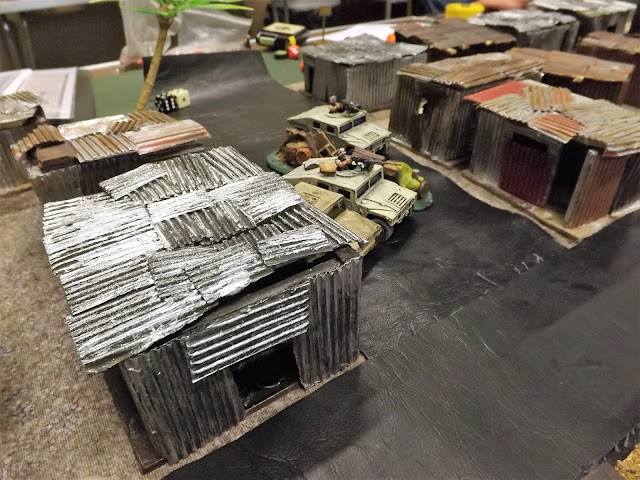 Charlie's convoy found its passage blocked by a crowd of women, children and livestock. Not wanting to appear on the Six O'clock news mowing down civilians, they were forced to debus and make their way on foot, whilst a gun Humvee was sent over rough terrain to try and intercept the group containing the hostages.

With the Deltas firing and moving, they were now in sight of the group containing the hostages. Despite concentrated Somali fire, the Deltas strode down the street firing as they went, killing or routing militia groups as they progressed. With clear shots on the guards, four short bursts of fire settled the matter and the hostages scuttled behind their Delta shield. 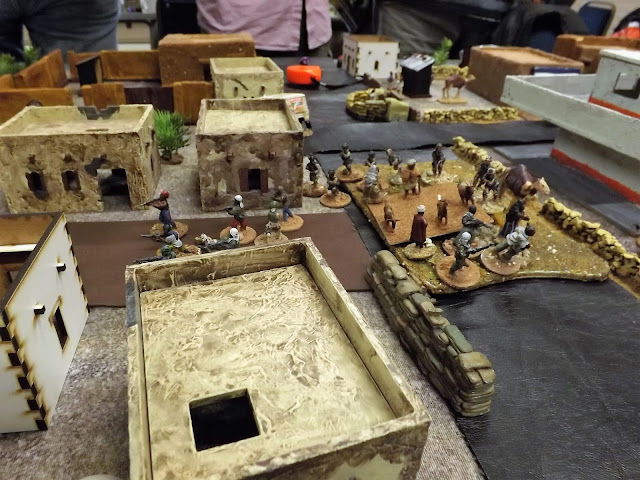 It turned out Charlie's cargo Humvee was driven by a suicide jockey. He casually used reckless speed to dodge HMG & small arms fire as he went, arriving behind the Delta team right on cue. The hostages were bundled into their "battle taxi" and out of town, under the covering fire of the returning Little Birds. 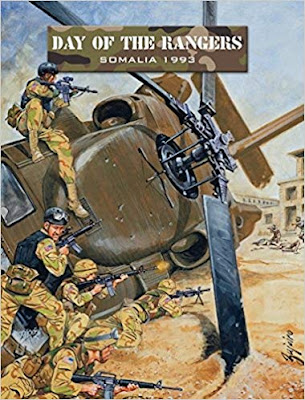 A fast paced game, played to "Force on Force", using the "Day of the Rangers" supplement.

Many thanks to Chas for putting on the game and Mark, Charlie, Bob and Steve H for playing it in some style.

Now, where can you get parts for a Humvee round here?