Nelson Who? - Trafalgar re-fight using Grand Fleet Actions in the Age of Sail


This is a report of our victorious action against the English pirates under Admiral Lord Nelson and his nefarious bunch of vagabonds. We in the glorious Spanish Fleet under Admiral Don Federico Carlos Gravina, shamelessly made second to a mere Vice Admiral Pierre-Charles Villeneuve by the Beast Emperor Napoleon, managed a magnificent victory over the not so glorious Royal Navy of England.


Following the instruction of the Beast to form a fleet to threaten England Admiral Villeneuve fled his
usual hiding place Toulon. With us meeting with him after he left the Mediterranean and
accompanied him on his summer cruise to the Caribbean. Why he went there rather than taking on
Adm.. Lord Nelson we have yet to determine. Probably French cowardice.

We eventually made it back to Cadiz in September 1805.
After much vacillation and 'noncing about', the Beast’s lap dog Villeneuve finally gave orders to leave port. Leaving port, in as much disarray as only the French could arrange, we made to sea
heading for the Mediterranean and hopefully the glory of Spain. We shook ourselves into proper
order thanks to the efforts of the professionalism of the Spanish commanders and headed south. 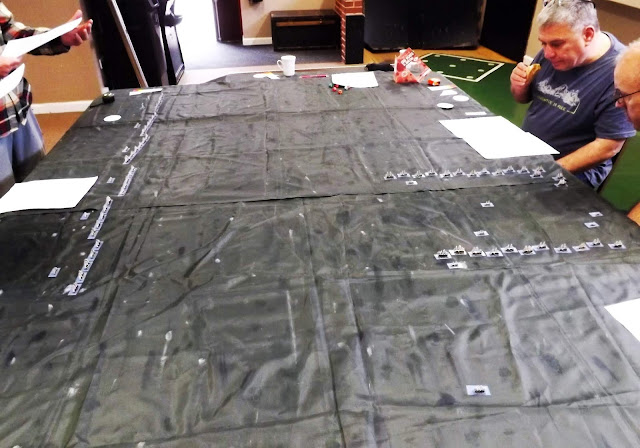 Early on the 21st October 1805 the English Fleet were spotted to our west and we hoped for a
chance to best the English. Only to have the Beast’s coward order a retreat to Cadiz, yet again
throwing the French into total disarray, with the English twenty miles away. This was compounded by the wind shifting against our fleets and giving the damnable English the weather gauge!

The mad English, ever impetuous for action drove straight at our lines. Slowly as the wind was light.
Our gallant R. Adm. Baltasar Hidalgo de Cisneros on the Santissima Trinidad, his flagship, was first
into the fight [The Coward Le Pelley still pushing hard for Cadiz]. A few smart broadsides from our
heroic ships in his squadron and the English formed line in accordance with the English Fighting
Instructions. The lead ship HMS Victory having enough of the hot fire and, as the English would say
‘bottled it’. As our squadrons passed each other in opposite directions, more hot fire was poured
into the English ships. The Victory leading it’s squadron and wing of the English fleet passed Adm.
Villeneuve’s squadron where more shot was exchanged, again the gallant Spanish taking the lead in
the action.

During this time V. Adm. Collingwood of the English fleet also tried his luck in a headlong charge,
again to be blunted by V. Adm. Ignacio Maria de Alava y Navarrete in the Santa Anna. Again the
English wing resorting to the English Fighting Instructions and trading broadsides with limited effect.

It was only with V.Adm. Alava putting the Santa Anna [112] in the path of the English Victory
[literally] that the English were brought to action. Adm. Lord Nelson veering off with most of his
squadron with only HMS Conqueror [74] courageous enough to come to close quarter action. With
the 2 ships thudding together the action was led by our heroic sailors in sweeping on the conquerors
decks. With a fierce and hard fought action our heroes being beaten back to our own ship, only for
the ferocious English to take the fight back to the Santa Anna, within the hard fought action V. Adm.
Alava was struck down dying on his deck. The Santa Anna was taken as a prize by the English.

During these actions V. Adm. Collingwood and Adm. Lord Nelson of the English fleets, whilst still
firing broadsides were heading to the south and I’m sure trying to escape the battle. It was only the
English Commodore Conn in the Dreadnought bringing up the rear of Collingwood wing that ordered
his whole squadron to close and attempt to board our ships under R. Adm. Charles-Rene Magon de
Medine. All attempts being hotly contested by both the French and our heroic Spanish sailors. 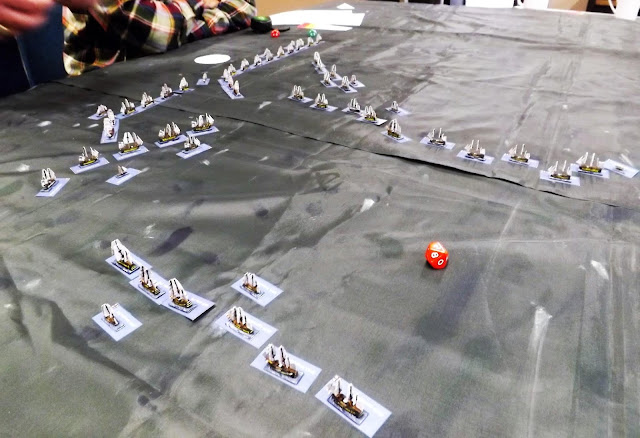 Unfortunately in the hard fought action Montannes [74] fell as a prize to the Thunderer [74]. All
other actions being fought to a stand still and all other ships breaking off. 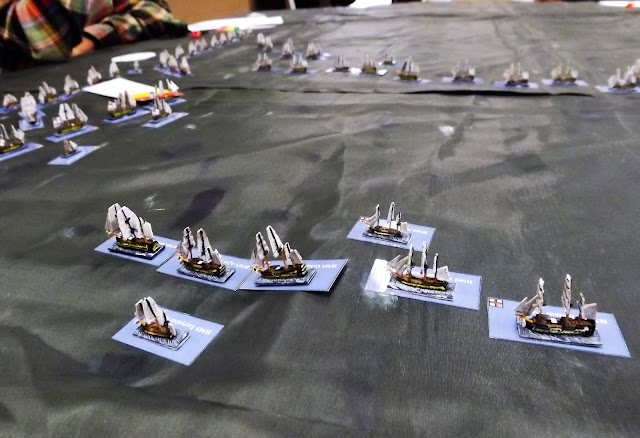 At this point the English declared they had had enough, time for their afternoon tea I think, and they
broke off and heading for Gibraltar to lick their wounds and contrive a report of a victory. 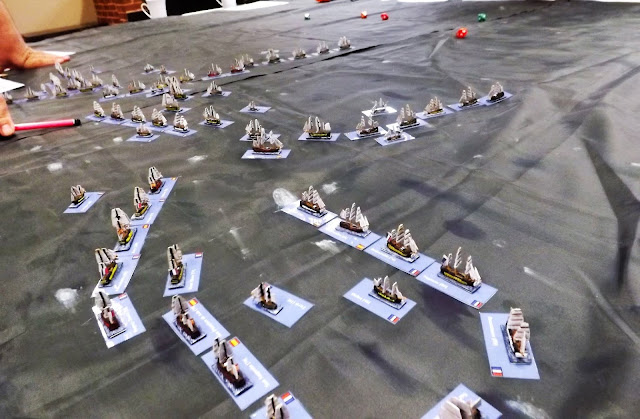 The battle was a raging success to our heroic Spanish fleet. It is hoped that a square in Madrid will be
named after this battle with a statue to the true hero of the battle V. Adm. Ignacio Maria de Alava y
Navarrete.’ 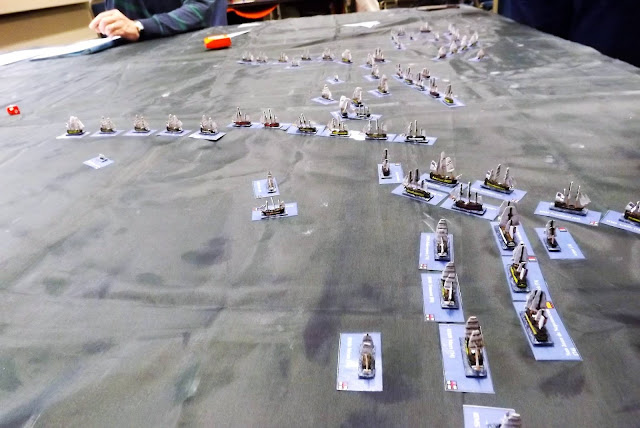 Trafalgar is always a difficult battle to recreate as there is so much expectation on the Royal Navy
side due to the legendary colossal victory Adm. Lord Nelson achieved and his death in bringing it
about. Psychologically this is always perceived as an easy win for the RN. However it’s anything but.
In this action, with the Royal Navy team deciding to follow the English Fighting Instructions and not
do as Adm. Lord Nelson did, break the line, board and destroy everything in sight. This resulted in a
very inconclusive win to the English side. With most of the allied fleet making it back to Cadiz. Adm.
Villeneuve will undoubtedly try and claim a victory and still be cashiered by Napoleon.

So, in this alternative universe we have to ask; Nelson who? With there being a Trafalgar Square in
Madrid with Alava’s column in the centre of it.