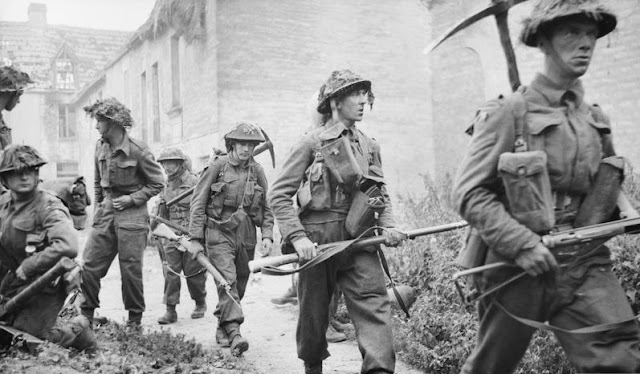 This battle is an updated version of the original which was written for an earlier version of IABSM. The ‘Big Man’ levels have been updated from the ‘D6’ method to ‘Levels’ and additional Big Men have been added in line with the more recent scenario format.

The game got off to a troubled start when I realised that I had constructed my hills the wrong way
round so had to put them on the table on a different corner to the map and adjust the terrain accordingly, but the game played well despite my ‘faux pas’. 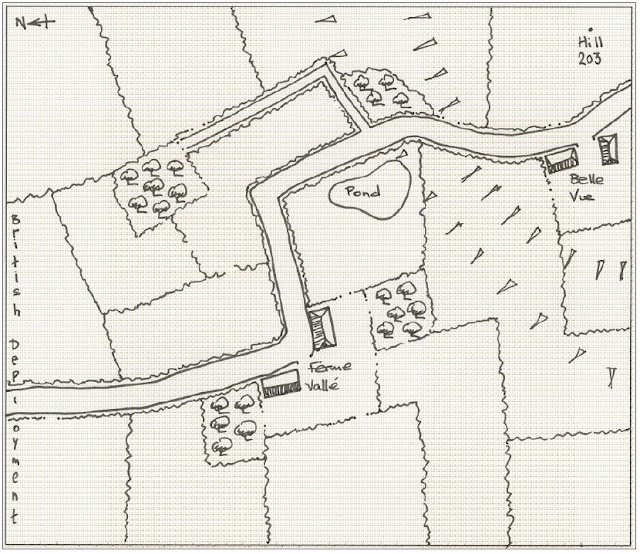 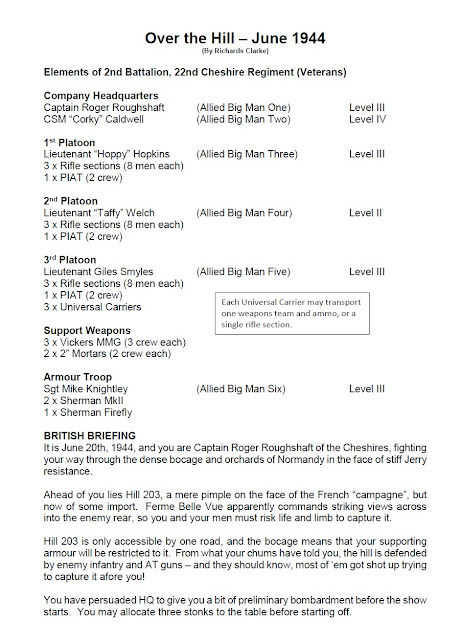 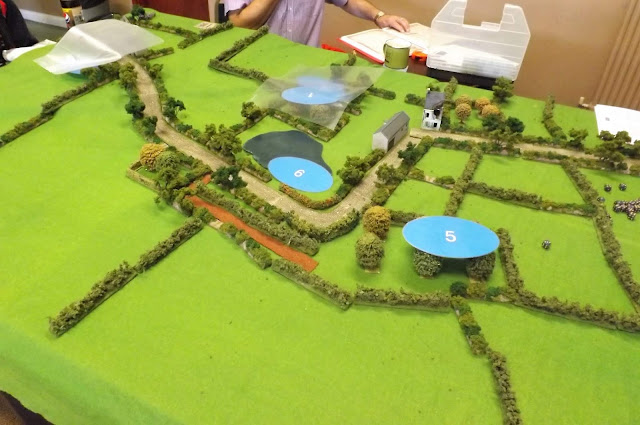 The British deployed on blinds with five real and two dummies, whilst the 12th SS had the benefit of
hidden troops so could deploy either marked on the map or by using their blinds. Their allocation was
five real and five blinds, with the number of real blinds able to deploy reduced for each hidden unit.
The 12th SS hidden deployment had their FOO in Belle Vue farm on top of the hill, with a good view
across the terrain; one Zug across the two buildings of Ferme Vallé; their three MMGs in the orchard
behind Ferme Vallé; the second Zug behind the east side of the hedge where the road turns south
towards the pond. Finally, their anti-tank team was in the corner of the field across the road from
Belle Vue. The Germans then placed their remaining blinds. 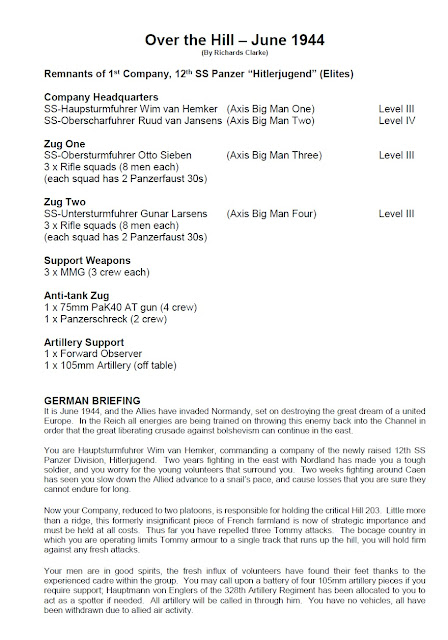 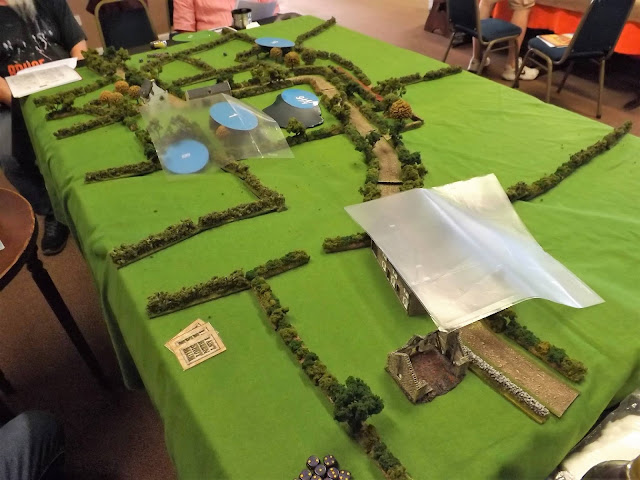 Before the game commenced the British had three ‘stonks’. They placed one of these over a dummy
blind near the pond and the other two stacked on Belle Vue. The single ‘stonk’ was ineffective whereas the double barrage on Belle Vue caused six shock on the lonely FOO who decided it was time to scarper. With the barrage over, when his card turned the German big man rushed from the orchard to Belle Vue in order that he could direct the four off-table 105s; fortunately for him the FOO left his radio behind in his frantic attempt to get out of the way of the ‘stonks’. 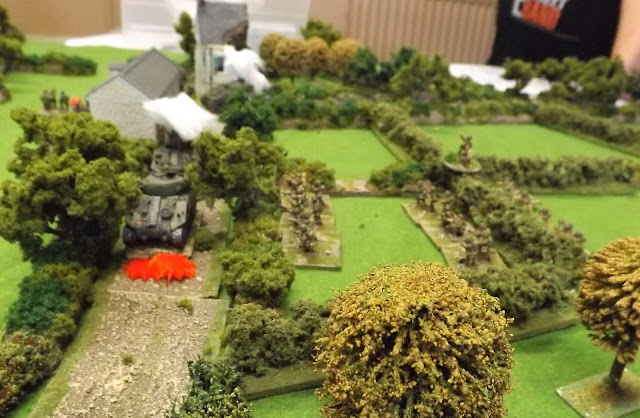 The start of the game favoured the British who had two blinds moves before the Germans could react.
As there were Germans hidden in Ferme Vallé looking straight down the road any British units entering on the road had to be placed on the table as automatically spotted. They decided to lead with their armour troop followed by 3rd platoon carried on the universal carriers. They had 1st platoon coming on a blind to the west of the road and 2nd platoon and the support weapons coming on between the east of the road and the hedgerow running towards the orchard.

Their first two moves with the armour showed no finesse with the tanks tearing down the road with three dice plus road bonus each time. This took the two leading tanks around the first major bend with the third waiting to turn the bend. 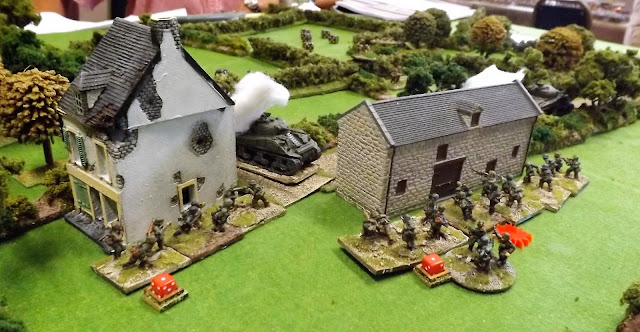 Unfortunately for them the next card turned was the Germans blind and they saw a great opportunity for an ambush. In an instant a panzerfaust round hurtled into the rear tank which promptly exploded killing all the crew and Captain Roughshaft who was hitching a lift. There was collateral damage to the section in the carrier behind with two being killed and the Germans in the building also lost one man. 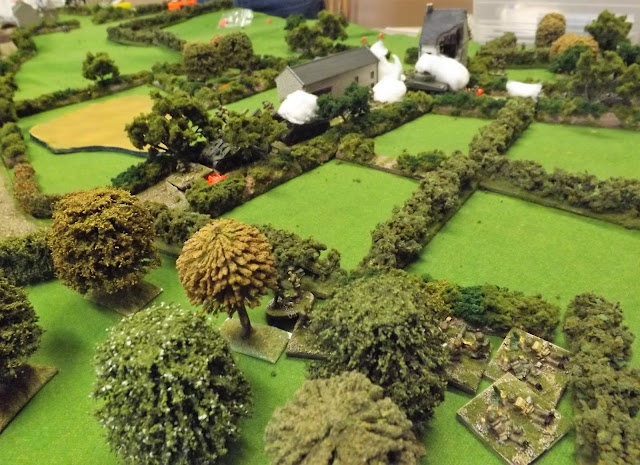 Whilst the Germans had been waiting for the British to come in to a firing position the Cheshires’
infantry had deployed off blinds, thus giving them more cards in the deck. They managed to get a
section within 4” of the building facing north on the bend. This initiated a close assault (the first of five such engagements in this very bloody game) with one British section fighting two Germans who also had the benefit of heavy cover, ensconced as they were in this thick stone farmhouse. The result was slaughter to both sides each losing a whole section. Meanwhile the Germans were desperately trying to call in their 105s. They were successful on the fourth attempt, which probably reflects the loss of their dedicated FOO. After all this effort their barrage was ineffective. 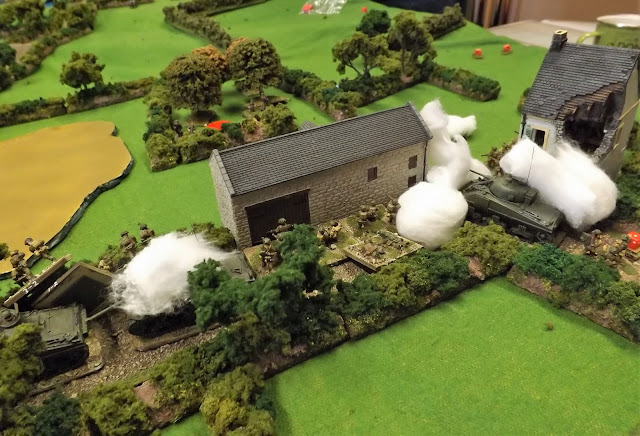 A panzerfaust round then hit the second Sherman in the rear, the fire coming from the other Ferme
Vallé building. This Sherman also erupted causing some collateral damage to friend and foe alike. In
the meantime, a British infantry platoon managed to move through the orchard west of the road and
close assault the western-most building of Ferme Valle. Although the German section in this building
had the benefit of cover, they had suffered casualties and were carrying a lot of shock. Following
another bloody hand-to-hand combat the result was another 12th SS section eliminated. 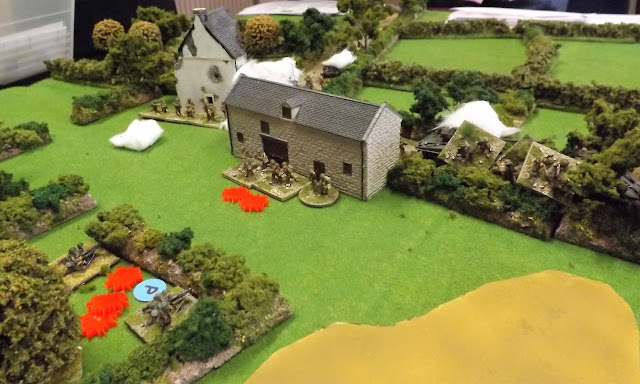 Having lost the buildings the Germans deployed their machine gun teams to fire on the farm buildings. This made the British realise that they should have used their 2” mortars to lay smoke which they promptly did. Following a further close assault by the remaining platoon of Cheshires on the second German Zug further casualties were inflicted on both sides and the 12th SS decided to disengage and withdraw.

A British victory, if somewhat a Pyrrhic one considering the high casualties.

Thank you to Steve, Steve, Steve and Steve for a very entertaining and friendly game.
Posted by carojon at 18:45