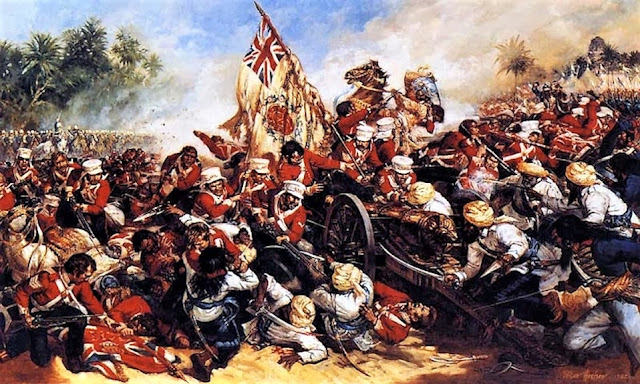 Late at night the British commander finally received the message he had been waiting for, it was the details for all the Sikh forces movements in the next few days. It told him that a detachment would be sent out to secure a small well in a nearby village; he therefore put together a strong force to intercept and destroy them. 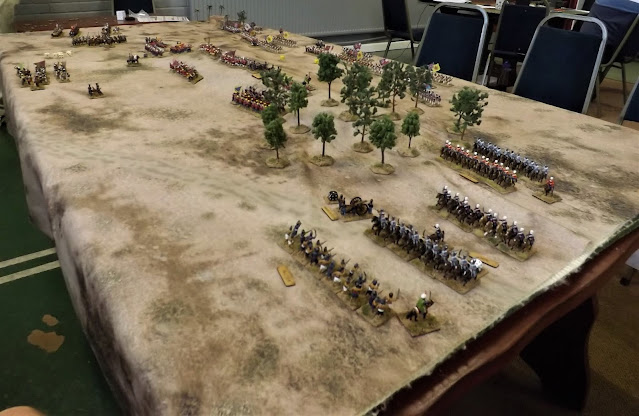 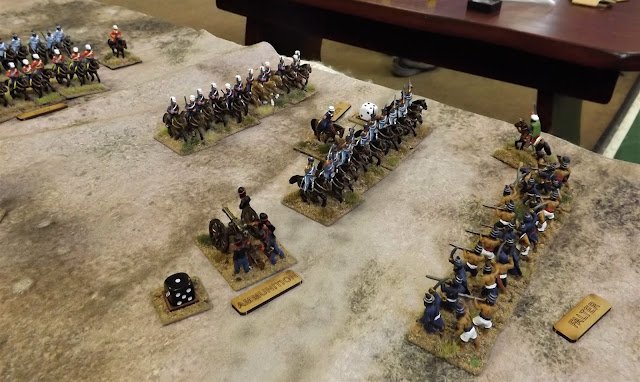 On arrival they discovered that the Sikhs had already secured the village and were now advancing onto the nearby high ground to confront the advancing British column, the British forces deployed into battle order and prepared to attack. 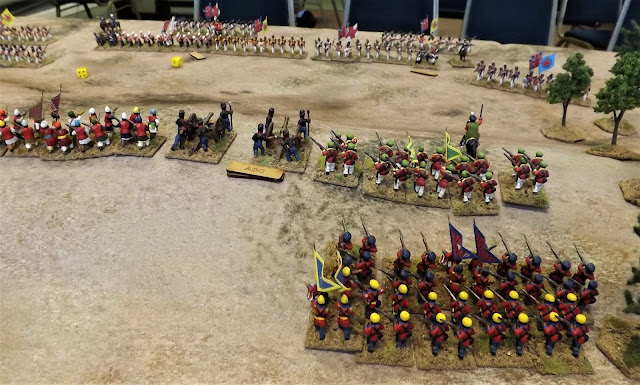 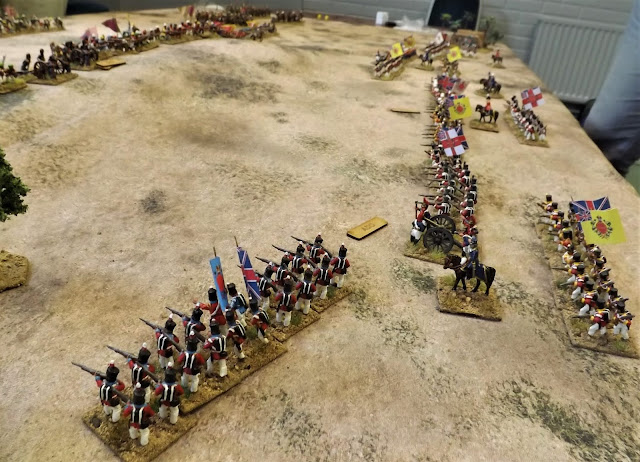 Using General d’Armee rules you get an agreed number of ADC chits each turn which can be used for various activities, you then have to roll to see how many are available for that turn. Usually at the start of the game the main use is for encouraging units forward and later in the game you might decide to instead add some to the artillery to enhance their firing or to the infantry/cavalry to give a bonus to melee etc. I gave the British six chits and the Sikhs only five to reflect the disloyal commanders and reluctance amongst the non-Sikhs. 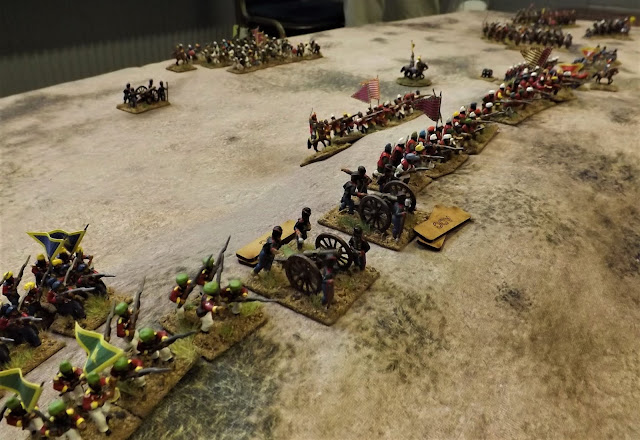 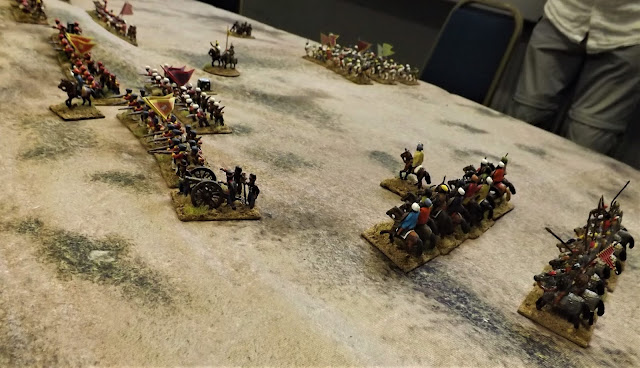 With the heavy Sikh guns deployed on the hill there was quite an understandable reluctance for the British and their sepoys to advance which was reflected by my frequent ability each turn to throw a 1 or a 2 for the relevant brigades orders which classed them as hesitant (each turn you roll for each brigade a 3-6 means obey orders, a pre-allocated ADC chit will allow a re-roll), my adding an ADC just meant me throwing another 1 or 2 so I decided give up and instead to try and blast them off the hill with my 9-pounders. 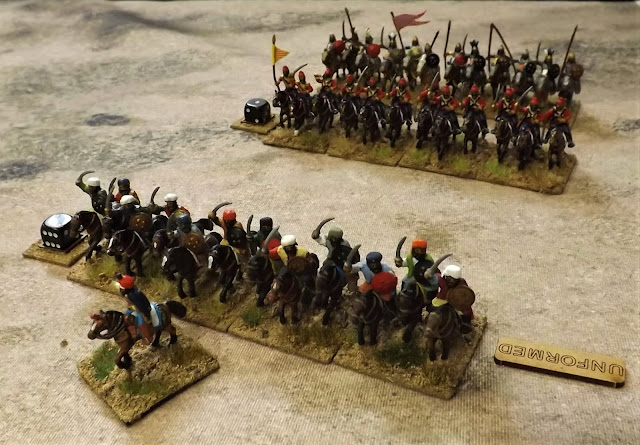 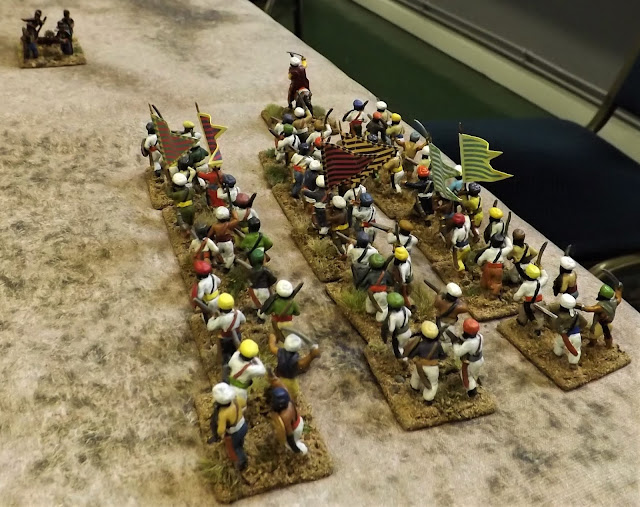 Two ADC chits will give you two extra dice that each has a 50% chance of an additional hit (no saving throws in this game). When using the firing table any really low rolls on your two dice will not only cause no casualties but will result in either fatiguing your guns or making your infantry fire become ragged; by enhancing your artillery firing, as I tried to do, you run the risk of inflicting even greater fatigue on your guns with a poor roll; queue a combination of rolls of 3’s 4’s and 5’s (with a -2 for shooting at guns not helping). 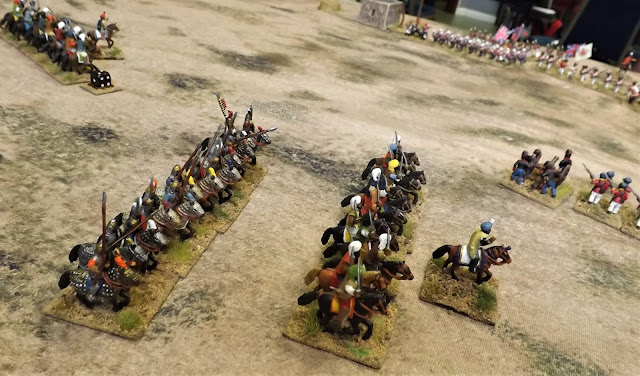 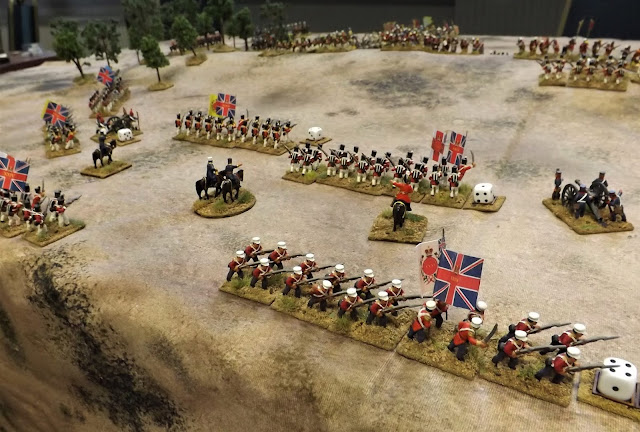 It wasn’t all bad, the Sikh guns whilst causing serious damage to some units had apparently forgotten to bring any ammunition with them as a series of double ones by my opponent were thrown on numerous occasions which meant a low ammo result for the concerned unit as well as fatigue, on each instance this was met with typical British indifference and absolutely no-one ran around the table with their shirt pulled over their head. 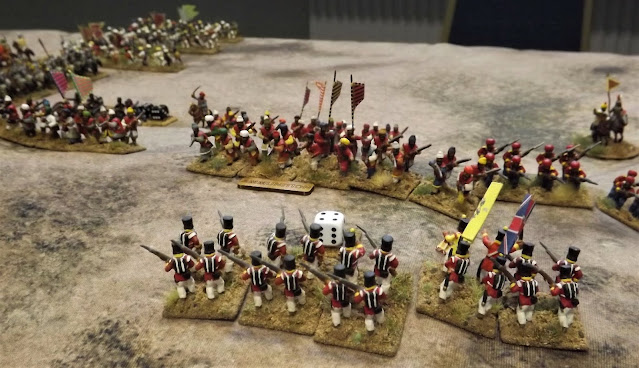 On the left of the British attack the cavalry smashed through the Sikh irregulars and the Akali Fanatics who were holding that sector, plus overrunning the attached gun, and the whole brigade was destroyed (loss of ADC chit). 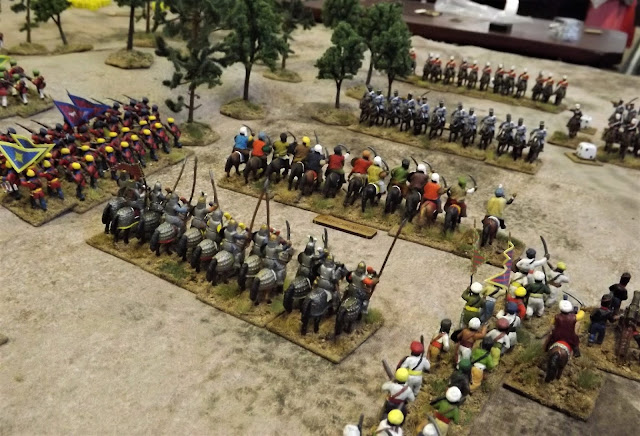 On the right a lone British 9-pdr potted away at a very reluctant Sikh cavalry wing that were clearly waiting to see who the winners were before plundering the losers. Inside that a couple of brigades advanced on what they hoped was a slightly weaker sector of the Sikh line whilst keeping a wary eye on the cavalry. The Sikh gun in this area was also unfortunately low on ammo but were backed up by a brigade of regulars who despite teetering on the edge of breaking flung back all the attempts to break through, with both sides casualties now getting close to having to take units off the table, one of the Sikh gunners suddenly remembered that he had some extra cannon balls in his spare jacket (2 ADC chits) so the British fell back. 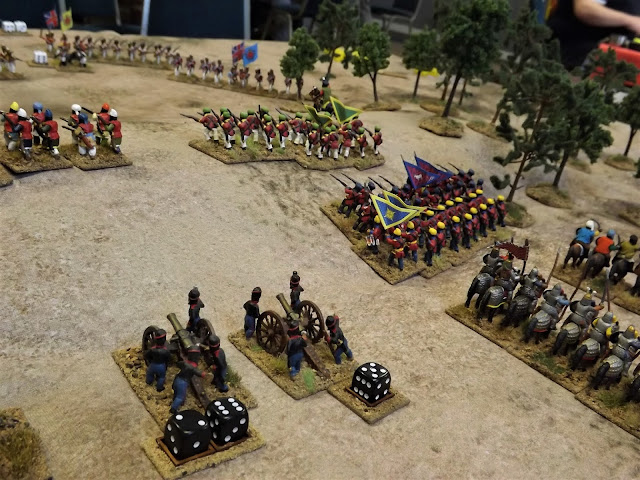 To their left a lone Sepoy regiment attacked up the hill were there were no guns or Sikh regulars, this was the high water mark of the British attack, stopped by a Jagadari brigade (local warlords semi-trained troops) they tried to shoot them away, charge them away (“not to keen on that Sir”) and then looked hopefully over their shoulders for any support. None was coming! 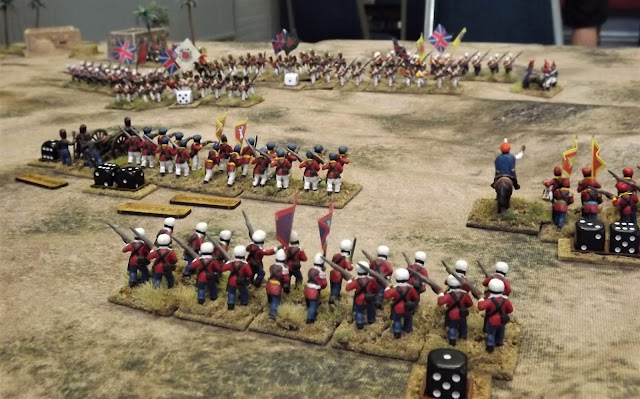 Meanwhile the Sikhs having seen their right flank collapse countered this by redeploying another irregular brigade to stem the British cavalry and finally convinced the Sikh cavalry to get involved and so moved them behind the front line to the other flank. Some half- hearted charges combined with yet more hesitant rolls by me saw the British Cavalry threat disappear. 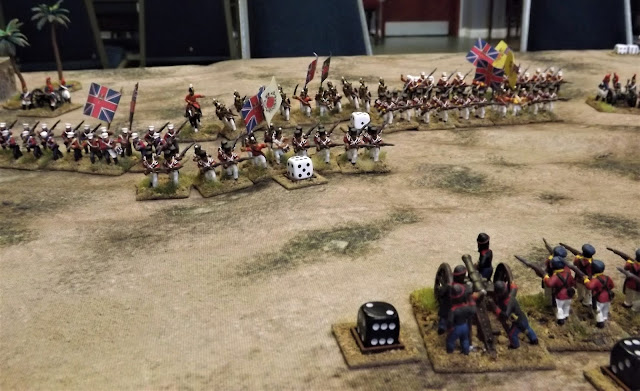 Suddenly the word “PUB” was heard from the flanks, looking around both players realised that they were the last game playing so a draw was quickly agreed and rapid packing up commenced however the British were in no real state to have pushed the Sikhs off the hill so they would have withdrawn anyway. 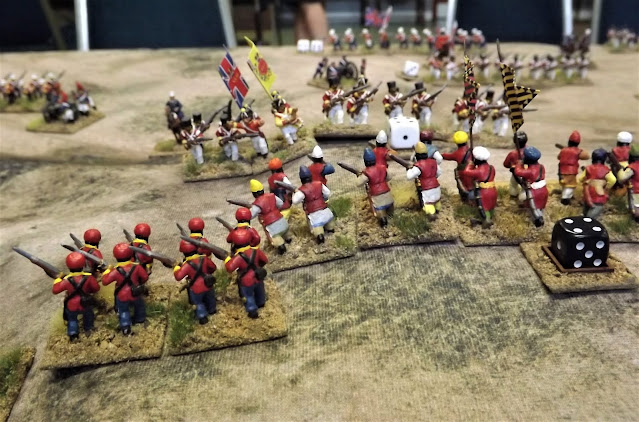 I have been looking for some time to find rules suitable for Sikh wars and out of the many, many sets tried these are the best yet. I liked that I could fit in all the relevant units from the Sikh wars to the terms used in the rules without too much trouble, I also liked the way that unit effectiveness degraded as casualties mounted or by increasing fatigue/hits if artillery. 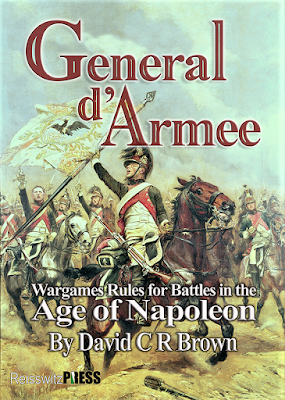 Having played and owned the ACW version, Pickets Charge, I was already familiar with and liked the use of ADC chits, movement and the command methods, I recall that I wasn’t convinced at the time about the way firing and melee was done when I played the ACW set, now, after a couple of games using the very similar Napoleonic version, my only remaining concern is about the melees but cannot tell you why so don’t bother asking.
Thanks to Dave for playing and for throwing so many double ones.
Figures: 1/72nd Newline Designs
Cloth: Zulu mat from Tiny Wargames
Trees: Woodland Scenic’s
Buildings: Hovels
Rules : General d’Armee available from Two fat Lardies
This has been a Mr Steve production.
Posted by carojon at 08:30