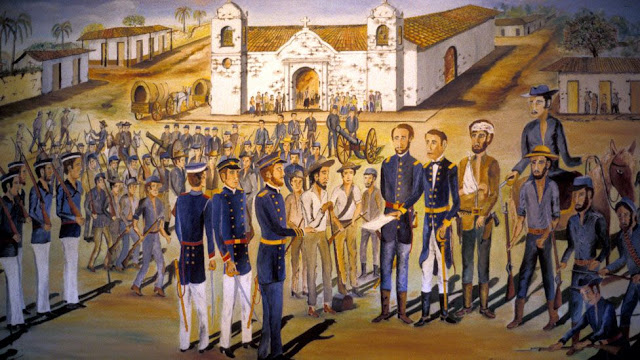 William Walker (President of Nicaragua) was on board his Steamer "La Virgin", watching what what was happening to his forces trapped in the church of Guadalupe. They had been given orders to burn the city down, but unfortunately they found some alcohol and when they woke they found themselves trapped by the Nicaraguans.
However fate intervened and more Filibuster reinforcements arrived, it was therefor time to save his brave lads. 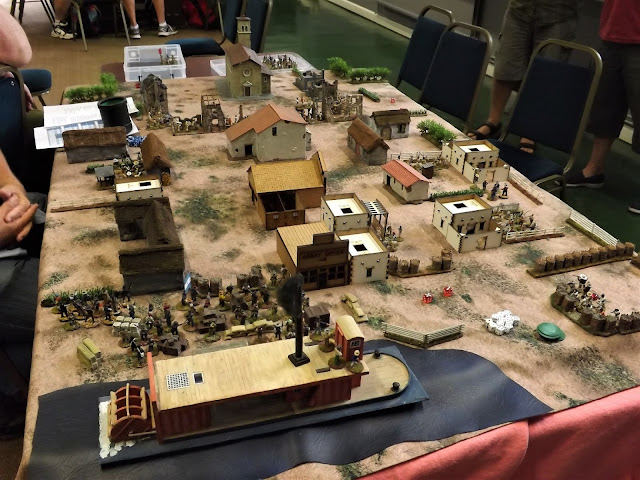 This is where our game starts. Juan and Carlos were in command of the city they had put an iron ring around the church, anyone trying to escape would be cut down (think Butch Cassidy and Sundance).
Other soldiers were scattered around the town and on the water front. They had a plan, that was to let
the Americans land and move inland, then the defenders would appear from the side streets and cut them off. 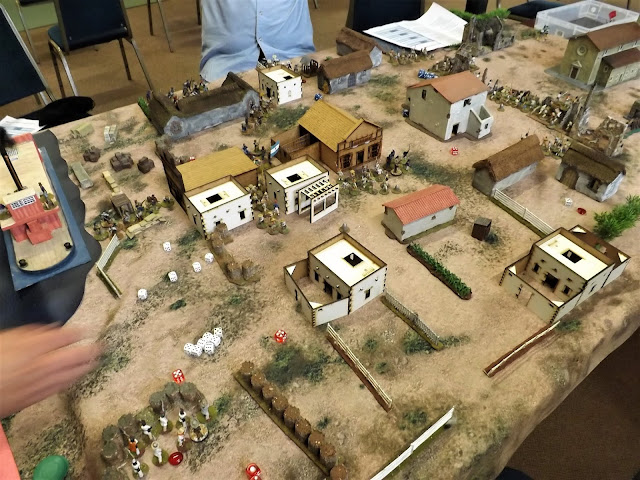 Walker had two brave volunteers, Gregory an American Patriot and Vince a British mercenary. They brought the steamer up close to the docks and let loose a terrifying volley, the dock guards ran away. The Americans then disembarked unopposed and formed two columns. 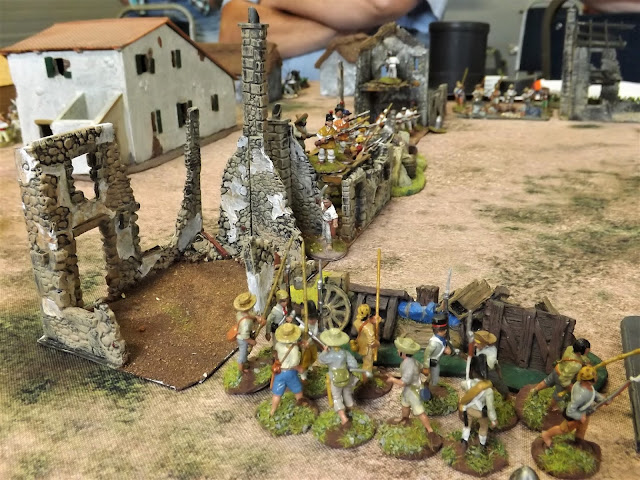 Gregory took his men up through the back gardens until encountering a large unit of peasants. There was then a long one sided firefight, the Peasants could not shoot back, however neither would they run away. 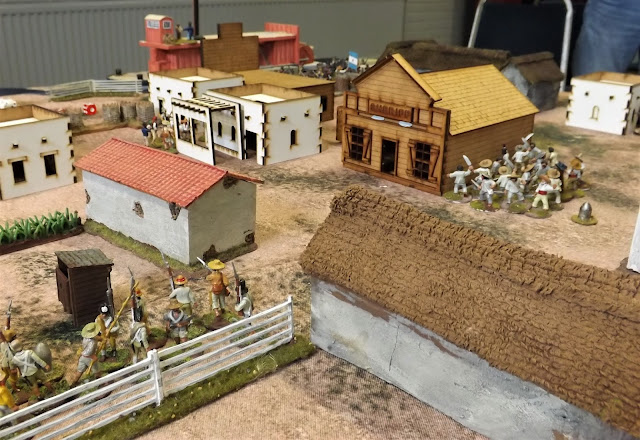 The other column lead by Vince advance cautiously up the high street, using long range fire to drive back the militia. On the flank was a fort held by some regulars, here there was a long range firefight by the American steamer guard which included a cannon. This too went bad for the defenders as the regulars refused to activate then finally ran away. 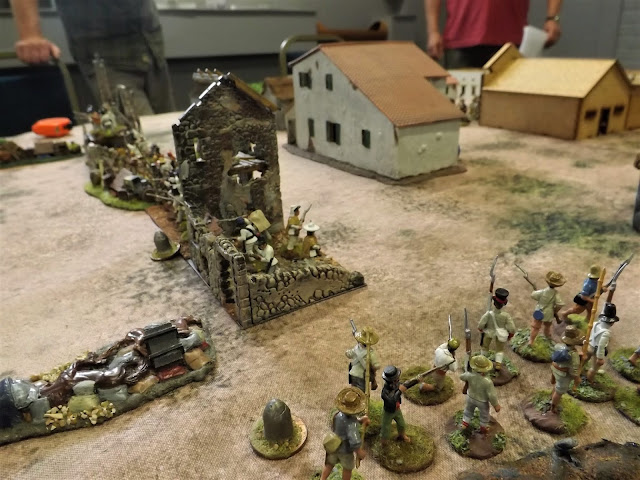 Things were basically going wrong for the Nicaraguans, poor discipline of the militia and peasants meant they joined the battle piecemeal and were shot to pieces. Units were even pulled out of the church guard but still could not change the run of the battle. 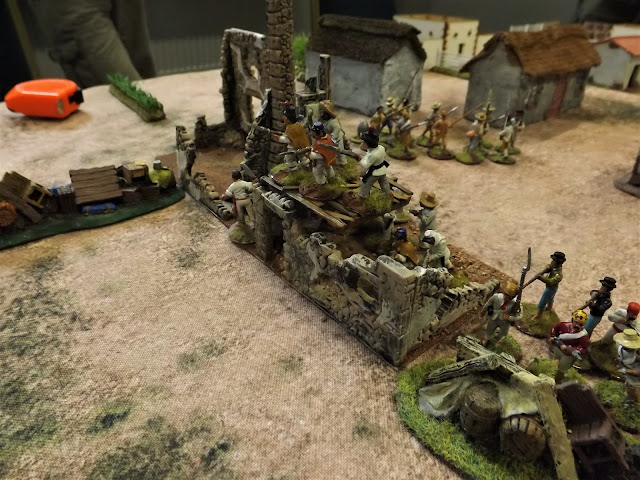 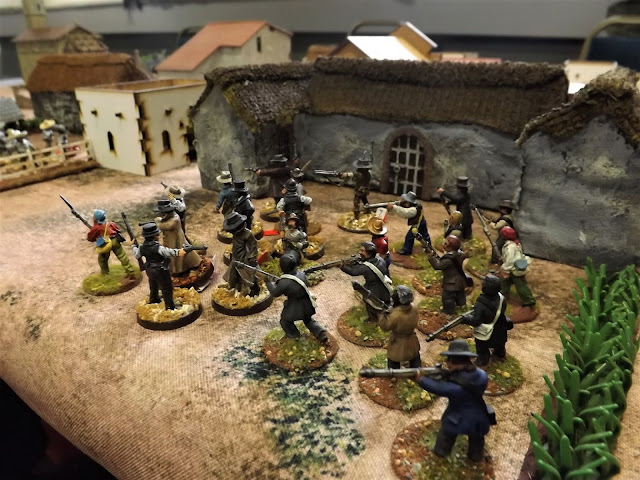 At this time Juan and Carlos thought it was time to pack up.
Now for some technical stuff.
Rules were Rebels and Patriots, these give a fun fast moving game. 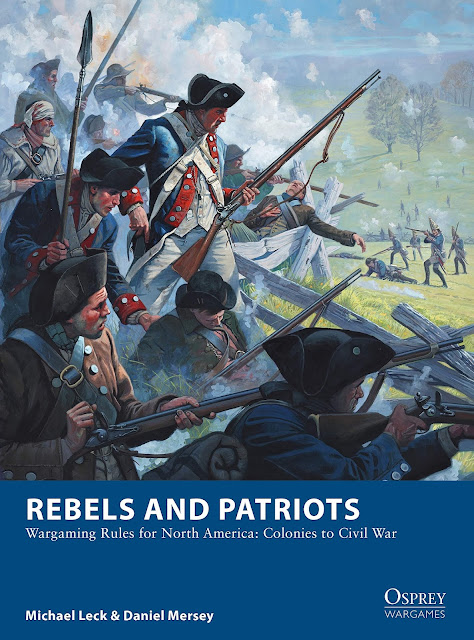 The Americans were classed as well armed light infantry, they provided their own weapons and were not well disciplined.
The Nicaraguans consisted of standard Line Infantry, Militia Line Infantry (-1 discipline and poor shots) and Peasants (Natives with-1 discipline).
Figures, 28mm, Americans Alamo to ACW/Cowboys ranges. From manufacturers such as Boot Hill, Perry, Redoubt Enterprise, 1st Corps and Wargame Foundry.
Nicaraguans were Napoleonic Spanish Guerrillas, South American Wars of Independence, Maximillian Mexico plus Mexican Cowboys ranges. Manufacturers most of the above plus Orinoco Miniatures.
In conclusion, the game played well and the Filibusters victory was due to their good tactics, playing to their strength and not letting the Nicaraguans use their advantage of numbers. If they got in close the game would have ended differently.
In case you were wondering, the game gave an historical result.
Thanks to Gregory, Vince and John for playing and letting me cross another battle of my to do list.
The Filibuster War
Posted by carojon at 17:42