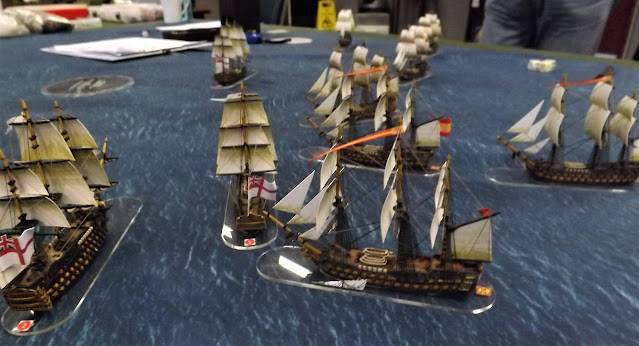 It was at this stage of the battle that the Fleet Preservation Rule kicked in with the Combined fleet now having lost a flagship (Argonaute) and another third rate, struck and captured by the enemy forcing a morale check first on Gravina's Spanish Van Squadron, needing a 5 or 6 on D6 to stay in the fight, which they promptly rolled.
However the two lost Spanish ships also breached the Combined Fleet's test threshold requiring to see if Villeneuve would hold his nerve or signal a disengagement, which was failed and the battle now changed to a rear-guard action as the Allies sought to get their squadrons clear without losing another ship and seeing the British trying to organise a 'General Chase' by units able to close in whilst trying to tack ever closer, revealing the benefit of having the wind to control events when either attacking or defending.
In the closing last moves of the game the Allies managed to break contact, with Villeneuve and Dumanoir able to bring their line across to cover the withdrawal of the Spanish and most of Magon's squadron, however unable to prevent the British van securing a third prize, the Indomptable, which was caught in the manoeuvre to break off and boarded by three British ships, including the 98-gun Barfleur, Commodore Martin's flagship, that closed with her and with this third prize secured a better result than the historical outcome.
'British take between 3 and 6 ships of the line:
Well done, you have bettered the historical outcome and probably saved yourself from the court martial that Calder had to face.'
Thank you to Gregory, Jack and Lawrence who took the roles of Calder, Martin and Stirling respectively and to David, John and Steve M who took the roles of Villeneuve/Dumanoir, Gravina and Magon respectively.
Both sides fought their battles more aggressively than their respective historical predecessors which is no surprise to most wargamers and it was pleasing to see Kiss Me Hardy working well for large games like this, with half the number of ships involved as at Trafalgar and producing a result playing from about 11am to 5pm with the chit driven activation standing up well to recreating the peculiar aspects of this difficult battle, made all the more fun in the spirit it was played.
I always think it shows how well a set of rules work when you can refight an historic battle and recreate so closely the events on the day, even with the commanders adapting the plan as best they can to those of their predecessors, and still deliver a final result that closely matched what happened.
I aim to put on more games with the collection this year to include some of the smaller actions so we can get more familiar with the nuances of this fun set of rules.
The collection uses the excellent 1:700th models from the Warlord Black Seas range of kits, the 10 by 5 foot sea cloth is from the also superb selection of cloths from Tiny Wargames, see the link top right, and all the model ships are based on acrylic pill bases supplied by Fluid 3D.
Posted by carojon at 08:53