Background
The year is 1068, King William did not have full control of his new kingdom. Harold's sons are organising raids on the South West together with their Viking Allies. Local collaborator Saxons are organising the militia defence and fast moving Norman Lords are there to come to the aid of the militia.
This months game was a four player game set up to reflect this situation. 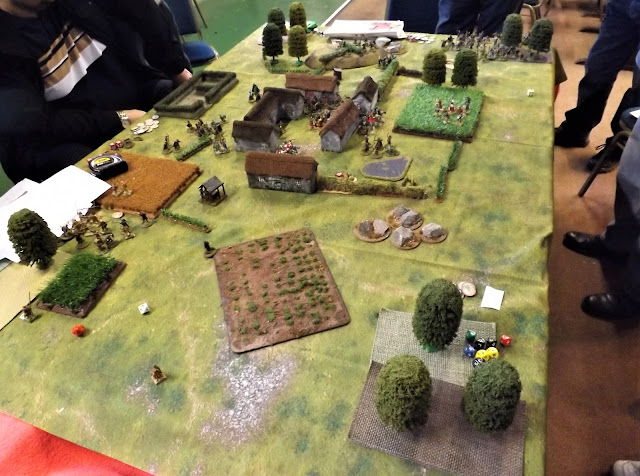 Saxon Militia had set themselves up in a village in the centre of the table, just before the attacking Saxon Exiles and Vikings arrived. On the opposite table edge the Normans were poised ready to support their loyal subjects. 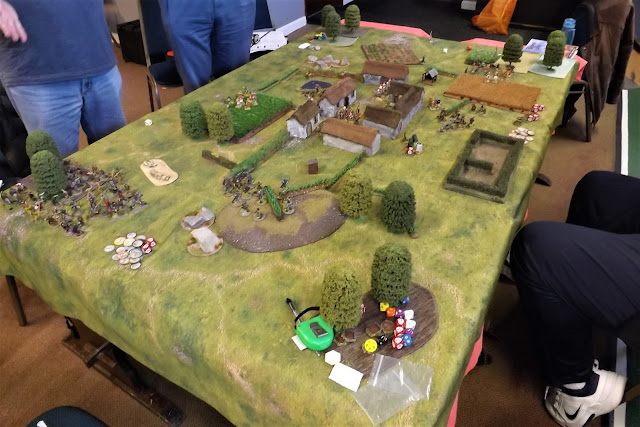 This was to be our club's first game playing Barons War, none of us had played the rules before so each force was given different characteristics.
Saxon Militia – third rate force. Thegn, Fyrd, Bows and Gebur.
Normans – first rate force. Knights, Death Squad, Milites and Crossbow.
Vikings – second rate force. Hirdmen, Berserker's. Bondi and Bow
Saxon Exiles – second rate force. Huscarl, Thegn, with Irish Kerns (Gebur with javelins), Irish Horse Boys (Saxon Mounted Scouts with javelins). It was assumed the exiles would have padded out their force with Irish.
It was also assumed that good Vikings and Saxons would have Dane Axe, the rest having spears. 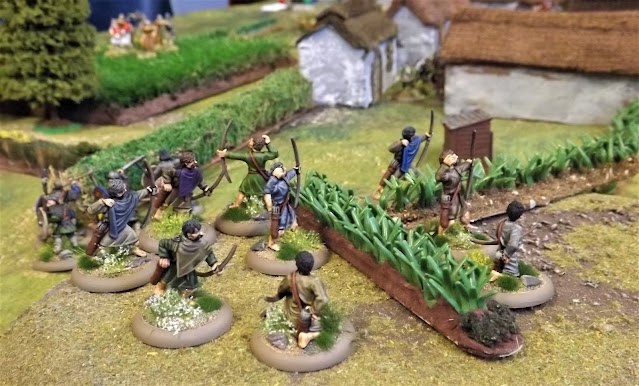 The sides were picked randomly.
Jason (“I am happy as long as I don't get the Militia”) set the Militia in the village. Vince with the Exiles took the left flank of the attack and Chas with the Vikings the right. Steve H sat on the opposite base line with the Normans. 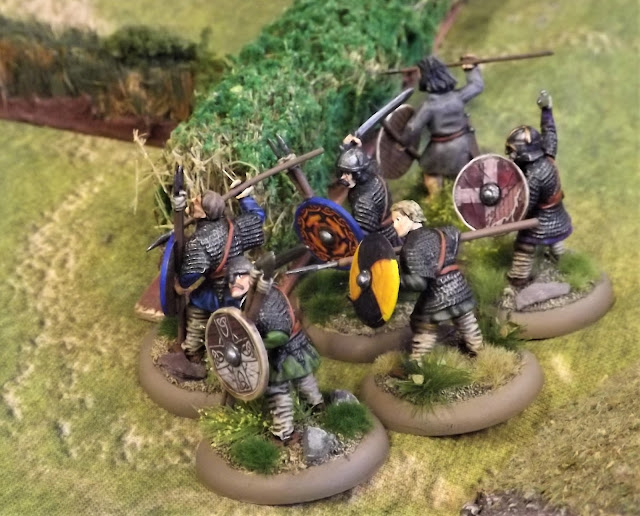 As this was a Medieval Game it was assumed there were a few grudges that needed to be settled, so each player was given a second objective which was to kill another character. 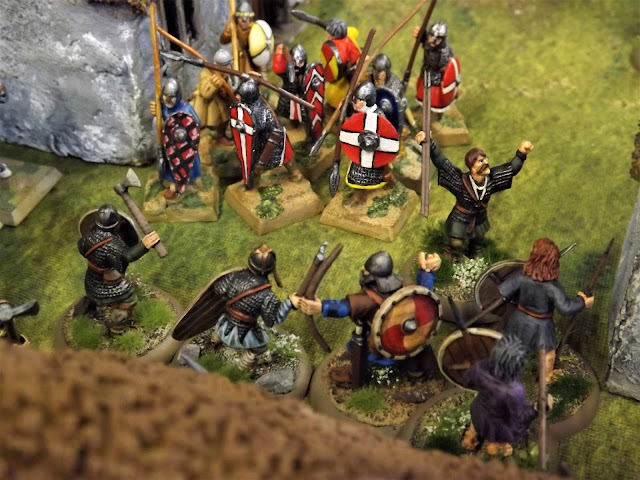 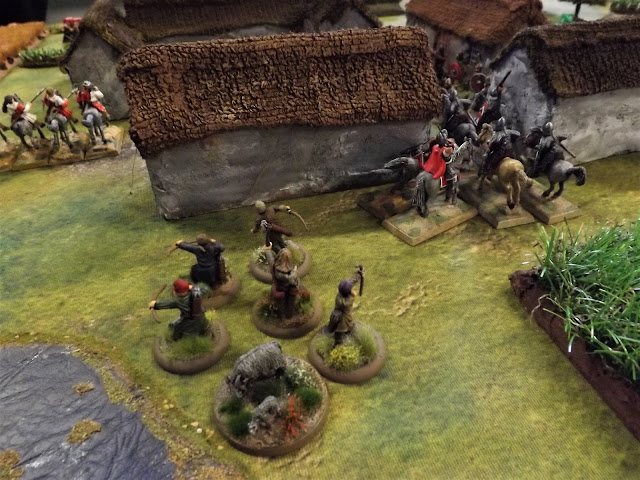 Needless to say the Kerns got shot to pieces by the crossbow, the Horse Boys then thought better of it and retired behind the village.
The Berserker's did what Berserker do and laid into to the missile troops, but they were soon dead. The rest of the Vikings kept close together and pushed forwards all the time keeping in command distance of the leader. 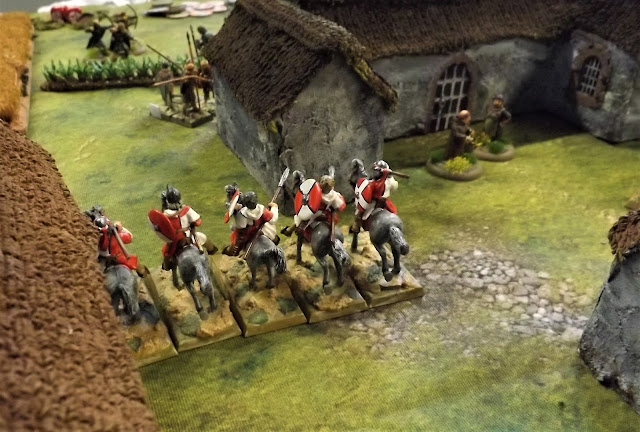 By now the Horse Boys had moved close to the Viking leader and let go a hail of javelins, which did a lot of damage. The leader and the one other survivor of the attack broke (but soon rallied). The Vikings, who were not to impressed with this act of infamy, shot at the Horse Boys with their bows, braking them, so honours were even. 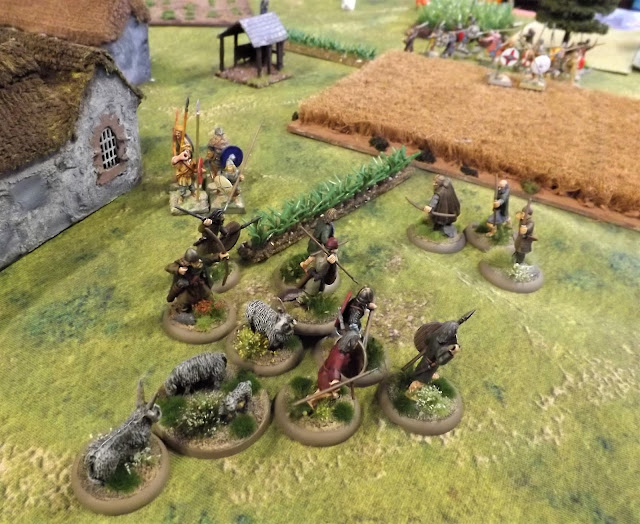 By now the Militia had had enough and were pulling back. The Normans were now moving into the village.
At this point the Exiles and Vikings thought they had run out of momentum and called it a day. 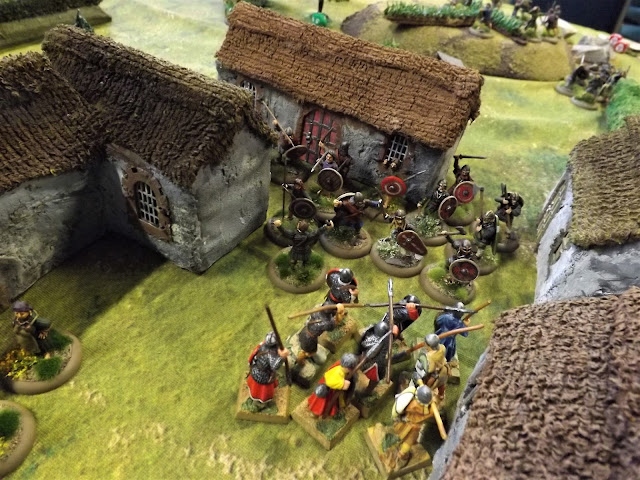 Technical Stuff
Like to thank Vince for providing the figures. In addition Steve H, Jason and Vince for playing a cracker of a game. Lots of laughs.
The rules play very well and recommend anyone reading this should give them a try. After the game Vince bought a set of rules, what better recommendation could there be. 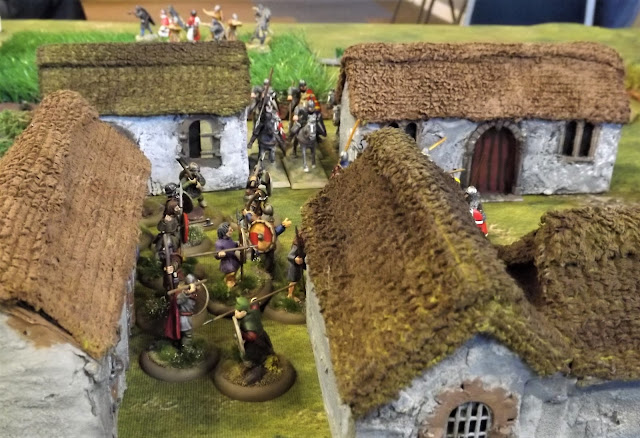 The rules give a game that has a good skirmish feel and, as we found, as the game proceeded it pays to plan ahead. Off course like all rules we found things to disagree with but that's what wargamers do.
If you plan to play a game yourself, recommend you use a lot of scenery and keep the abilities to a minimum for the first game.
Posted by carojon at 07:16