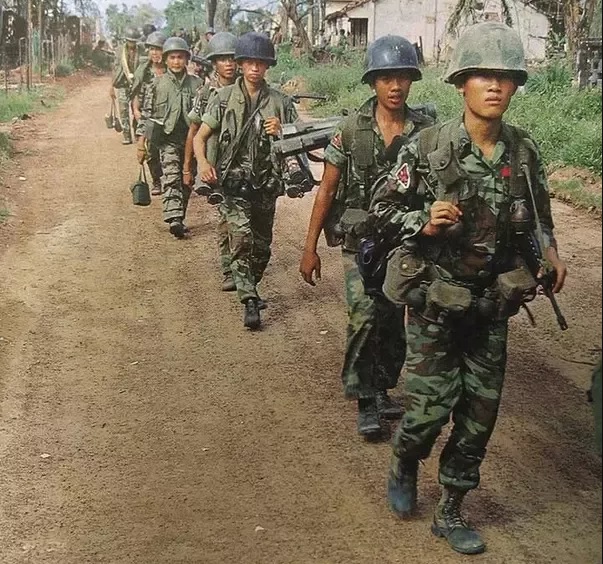 I have always enjoyed playing Chain of Command (CoC) by the Two Fat Lardies. Originally written for
late World War Two, I have enjoyed playing CoC games ranging from the First World War to Vietnam. Today I organised a CoC game set in Vietnam using the rules supplement “Chain of Command DMZ- Second Tour”, by Jason Sendjirdjian of
https://carportgaming.blogspot.com.
Jason’s supplements cover both the war in South Vietnam and the earlier French Indo-China war; there is other material of interest on Jason’s blog too. 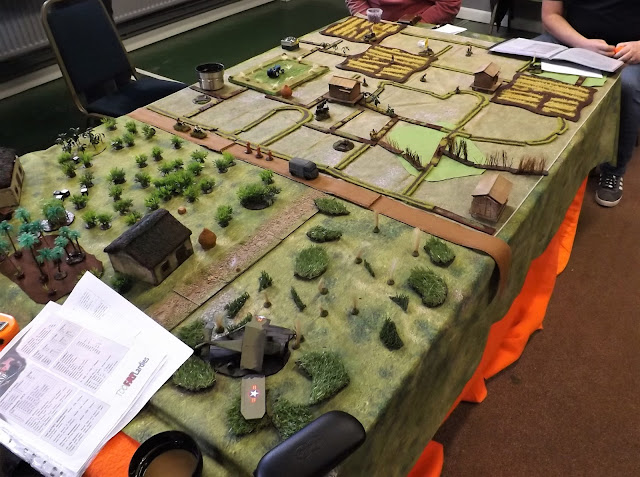 Our game was set in South Vietnam in 1962, the time of Premier Diem, when there were about 15,000 US military “advisors” in South Vietnam’ the crashed light aircraft represents one such US intervention “Operation Farm-Gate”.
The USA had long been involved with Vietnam in some way or other. In WW2 the US supporting the Vietnamese nationalists/communists against the Japanese and then the French against the same nationalist/communists. The protagonists in our game however, were strictly The Army of the Republic of Vietnam (ARVN) and the communist Viet Cong (VC).
At this stage of the Vietnam conflict, engagements were mostly of a small scale, unlike those following the deployment of thousands of US troops to South Vietnam.
The Game
All four players in our game were familiar with the main CoC rules, which made being the GM much easier, once the Vietnam specific rules had been explained.
The army lists for both armies are available on Jason’s site, for those interested.
The ARVN is based along reasonably conventional military lines, equipped with US military equipment. The VC are equipped with Soviet/ Chinese weapons mostly the SKS automatic rifle, rocket propelled grenades and light machine guns. The ARVN use the conventional morale system in the main rules set, but the VC, being irregular troops (farmers by day, soldiers by night) use the CoC irregular forces morale rules.
The ARVN morale is pretty flaky as they have to take a morale text for every figure killed; this represents the problem of building-up a national army while a conflict was already underway. 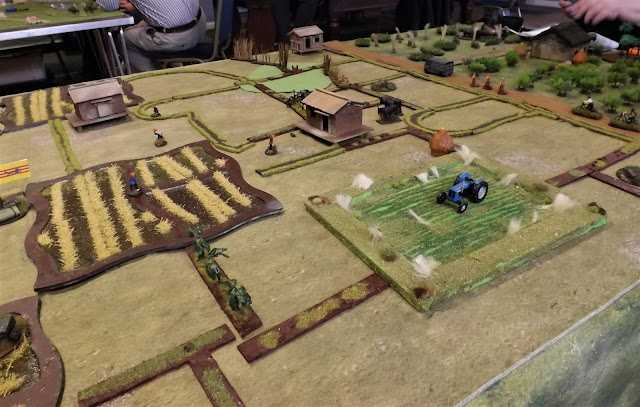 As a side note, President Diem of Vietnam, while deeply anti-communist was also deeply anti-French. Once Vietnam was divided into north and south, Diem insisted the French depart South Vietnam without delay, which did not allow much time to build up a new national army to replace the departing French forces. The result was an urban franco-phone, Christian officer corps commanding Buddhist, Vietnamese speaking soldiers recruited in rural area.
Corruption was a persistent problem too, the US Embassy called The President “Per-Diem”, the Latin for “daily rate of pay”. The communists had, on the other hand, a simple and consistent message based around national reunification and social/economic equity of the Marxist/Leninist brand, though much of the latter went over the heads of the rural folk. 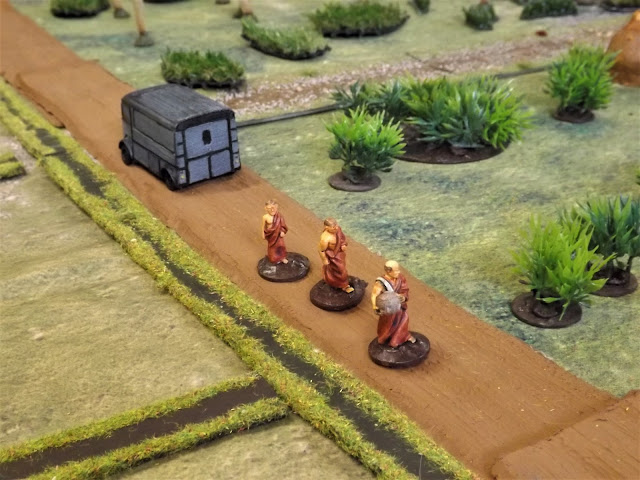 Our game was set amongst the paddy fields in the Mekong Delta region, a tranquil and bountiful region of the world. The players rolled to select the scenario and it was scenario four, a delaying action by the VC (page 77 of the main rules book).
The ARVN morale was pretty good and the patrol phase quickly completed. The ARVN players had selected an extra section from their support points, along with a sniper and one round of off-table support fire.
The VC selected…well that was for the VC to know and the ARVN to worry about. The ARVN advanced quite rapidly through the paddy fields enjoying good movement dice rolls and a double phase too (2 x D6 command dice), despite the terrain being heavy going.
The ARVN wisely kept off the paths between the fields and made good use of the field bunds to give them hard cover wherever possible. The ARVN sniper took up position under a farmer’s hooch to keep watch but the VC were not to be seen. 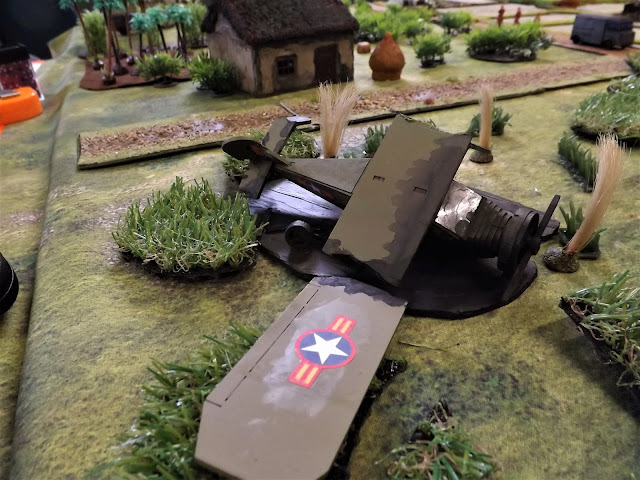 After several phases of command dice rolling, all hell broke loose as two large groups of VC appeared from their hide-out Jump off points. As irregulars the VC didn’t have a formal unit structure, their force consisted of 27 figures armed with SKS rifles and two NCO’s, to be basically organised as the VC players wished.
The VC support options allowed some rifle armed figures to be swopped for RPG and light machine guns and the VC had taken these support options.
The VC are considered poor shots, so they deduct one from the to hit dice roll, but the volume of fire directed at the ARVN meant shots were finding their mark and ARVN troops going down. The effect on the ARVN’s flaky morale was soon felt, despite their returning fire and inflicting losses on the VC.
The VC, using the irregular rules for morale absorbed these casualties, especially when the VC’s motivation increased as they saw the ARVN casualties pile up. Not withstanding their casualties, the ARVN players took full advantage of the extra infantry section they had used their support points for, to push forward.
Once the VC had exhausted their three RPG rounds carried, they disappeared from view, back down their JOP’s. 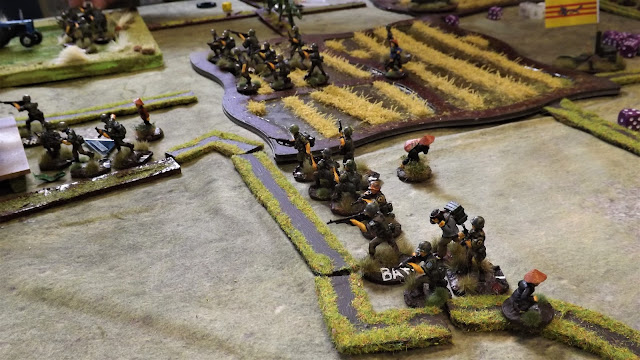 The ARVN’s victory condition was to capture two VC JOP’s and now the field was clear for them to do so. The ARVN used a chain of command dice that they had now accumulated to relocate their sniper forward to a position within four inches of a VC JOP, shutting the JOP down so the VC could no longer deploy from it.
Elsewhere the ARVN advanced as fast as possible, taking advantage of the VC’s temporary absence, to seize a second JOP. Alas the earlier good movement dice rolling for movement seemed to have deserted the ARVN, just when it was needed.
Sections were stuck out in the middle of paddy fields, without adequate cover and the VC were ready to pounce. Having good local-knowledge the VC were allowed to relocate one JOP up to 18 inches, once in the game. The VC proceeded to move the JOP shut-down by the ARVN sniper, to an advantageous position on and behind the ARVN’s flank. Now deploying from this relocated JOP the VC poured fire into two ARVN sections that had previously enjoyed the hard cover of a rice paddy bund. 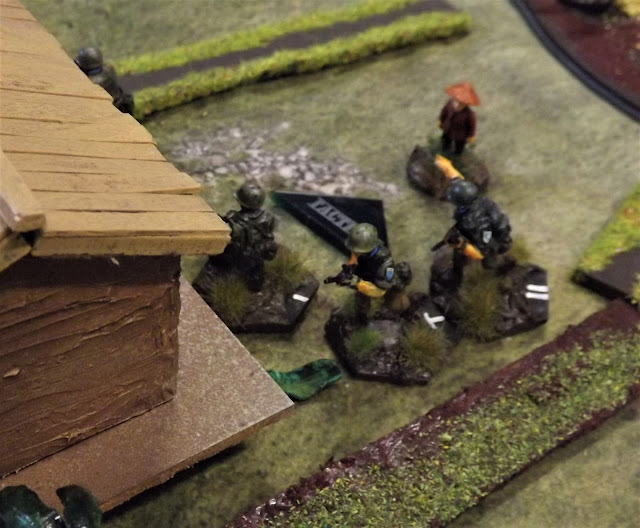 At the second JOP the ARVN were targeting; the VC deployed their master-stroke by ambushing the ARVN with a medium machine gun concealed in a bunker. This was a bit of a gamble by the VC as this
support option had used up most of their support points, but it paid off for them. Despite valiant attempts by the ARVN to fight back, the loss of command-dice due to declining morale, meant the engagement was over for the ARVN. 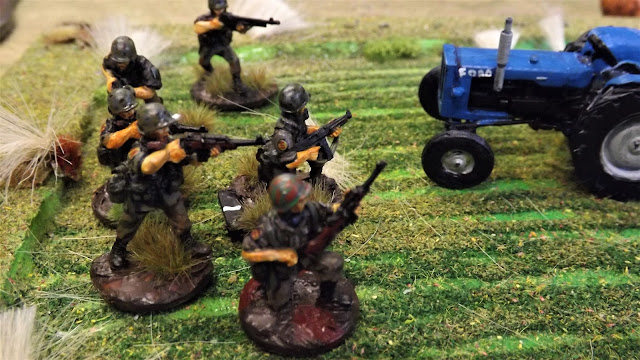 As everybody had enjoyed the game and it was decided to play another game on the same terrain to take advantage of lessons learned. This time Scenario 3 was selected form the main rules set – attack and defend, with the ARVN as the attacker.
The ARVN pushed their patrol markers deep into VC territory concentrating on dominating one flank only. This time the ARVN had selected extra off-table support fire, rather than an extra section as their support options. Again the ARVN pushed forward quickly to seize the nearest VC JOP.
This time there was no delay from the VC who deployed two groups of fighters, jointly commanded by their inferior senior leader. The nearest ARVN section was subjected to murderous VC fire, but put up a good fight with support fire from the other two sections.
The ARVN senior leader called in the off-table support fire, but as soon as the VC realised what was to happen they surged forward to melee the hard pressed ARVN section, which by now was denuded in manpower and pinned down.
So great was the VC’s advantage in the melee (more than four times as many combat dice) that the ARVN troops simply broke, before the melee took place. With so many morale rolls on the “Bad things happen” table, the ARVN morale collapsed again. Try as they might the ARVN couldn’t get the artillery right and the game was declared another VC win. I think it must have been the shortest CoC game I have ever seen. 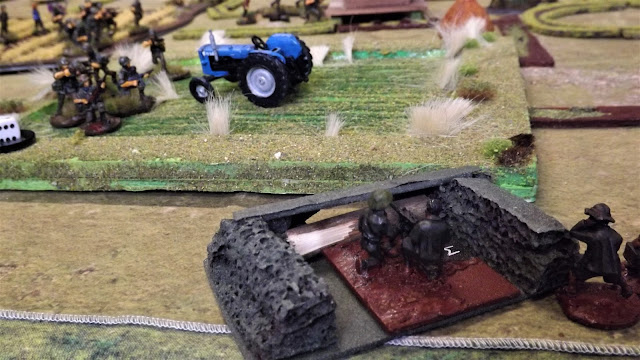 Thanks to Jeremy and Colin for playing the ARVN and Bob and Nathan the VC. We all agreed that while we were playing CoC, the feel of the game was different and reflected the historical difficulties of the time and situation quite well. I look forward to more CoC games set in Vietnam and French Indo-China, where things are even more desperate!
Posted by carojon at 08:08