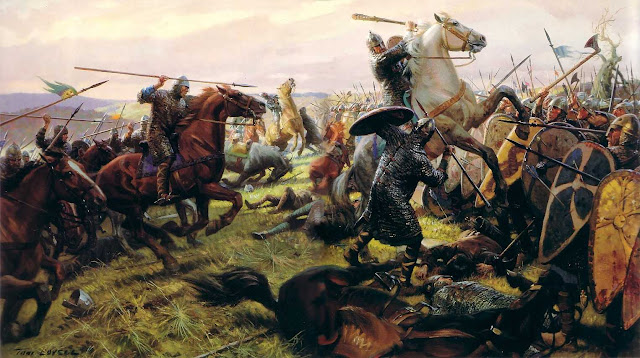 Normans V’s Saxons played using the Crusader Rules. The armies were just over 6000 points each 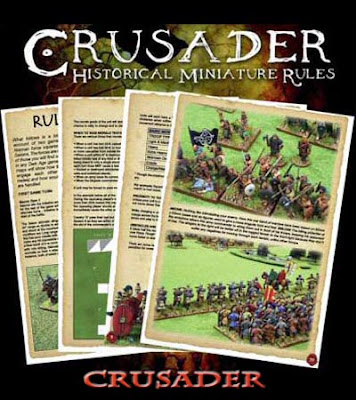 Before the report just a note on one major idiosyncrasy that I observed, a unit will conduct ALL of its
actions before the next unit is activated. If your unit routs then no other of your units can be activated
in that turn. Choose very carefully which units to activate first otherwise you may be up the creek
without a paddle.

The very friendly Normans have crossed the channel in the hope of civilising the very uncouth Saxons but as usual the Saxons get uppity. The Normans, under the command of their very famous generals have advanced towards some low hills with a small farmstead in the low ground leading to it. On the Normans right there is the house itself. In the middle is a small wooded area and on the left is a walled field.

The Normans and Saxons then deployed units alternately until they were arrayed in all there splendour.

The Normans had the cunning plan of holding their right flank with their not so very good infantry and then smash the Saxon infantry on the left with their poor to very good cavalry and hence roll up the Saxons from the right all the way through.

The Saxons deployed with Ian (The Dice Master) on their right, Steve M in the middle and Nick on the left. This is where the Normans plans unravelled. 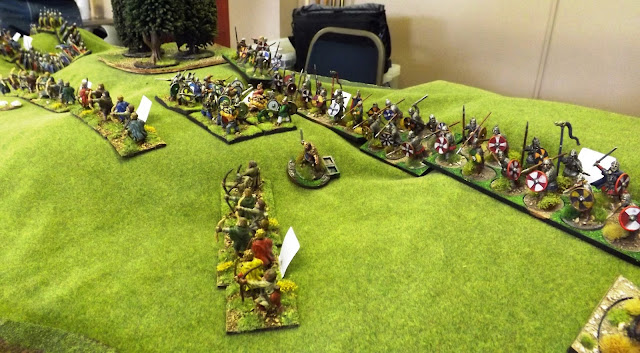 On the Saxon left Nick moved forward to occupy the farmhouse. This was countered by Norman
infantry and skirmishers. In the middle Steve M pushed his bowmen forward this was countered again by the not so good Norman infantry. 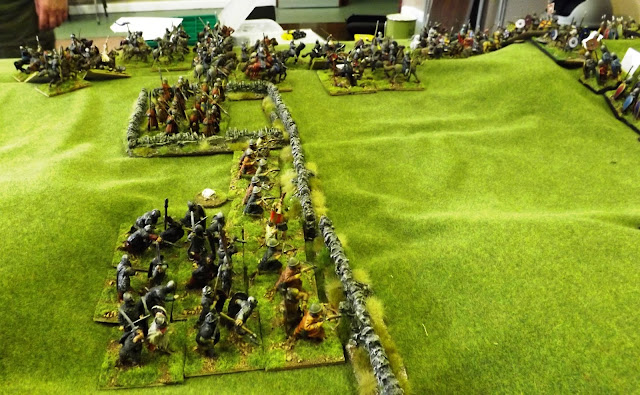 On the right Ian waited soiling his underwear as the Norman cavalry advanced. The Normans flung their worst cavalry at the waiting Saxons. Up goes the Shield Wall, long pointy stick and all. The dice are thrown by both sides. What are the Normans thinking? The Dice Master is there. Cracking dice from Ian, not so good from Nathan and the cavalry rebounds with minimal losses. OK now the Normans know. Huscarl in all their armour and with all the training known to man are not to be trifled with using poor cavalry. Undaunted the Normans try again using slightly better cavalry and against another unit. Surely it can’t be as good. They are not, Thegns in medium armour this time, the results are worse, the cavalry routs. 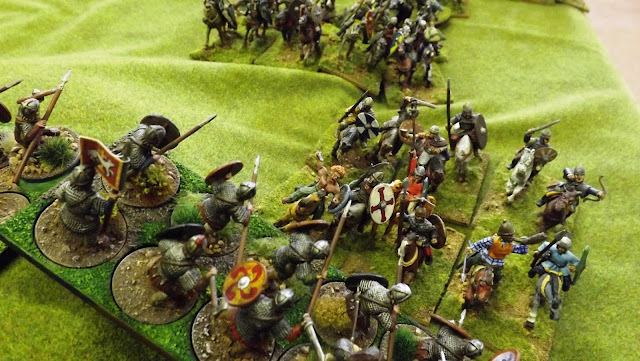 On the Norman right Steve L, after exchanging arrows with Nick, launches a couple of charges. One unit of skirmishers is routed from the field but the other unit holds on. This has the effect of stalling the Saxon left. 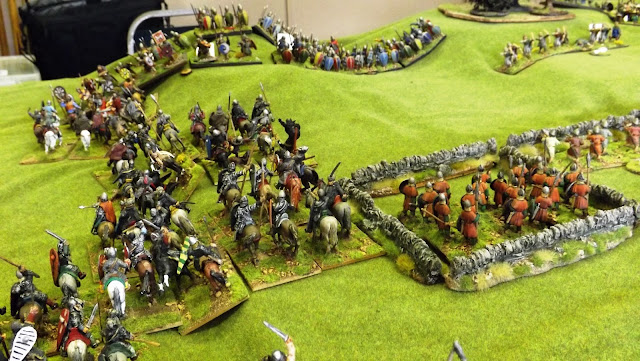 In the middle Steve M has now become the Dice Masters apprentice and proceeds to push back all
attempts to get at him and then pushes forward himself. 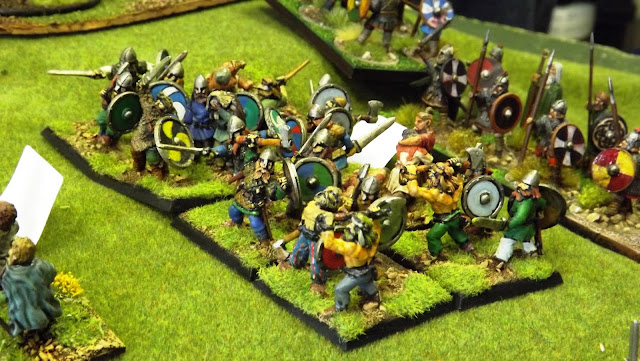 On the Norman left Nathan puts in his third unit of cavalry. You can’t beat the Dice Master Nathan. OK change of tactics. The Normans have two units of very good cavalry left. They are withdrawn and pushed against the centre where Steve M awaits. Nathan is confident. Surely there can’t be anymore Huscarl or Thegns. You are right there. Instead they are Viking Mercenary with medium armour. Still heavy horse should do the job, except Steve M is now the Dice Master’s apprentice and Nathan is out thrown again. The Norman Cavalry is pushed back. 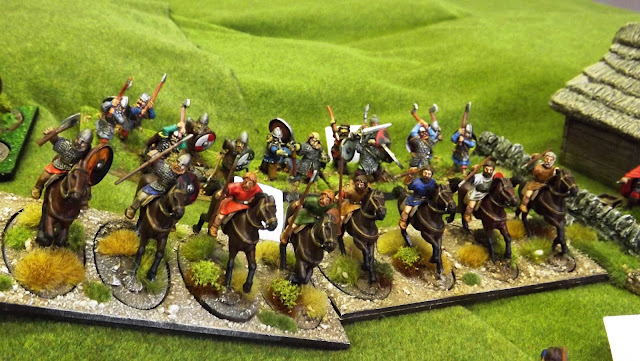 All the Saxons are now pushing forward and are relatively unscathed having had no routs at all.
The game is decided as the Normans call it a day. One in the eye for the French then? 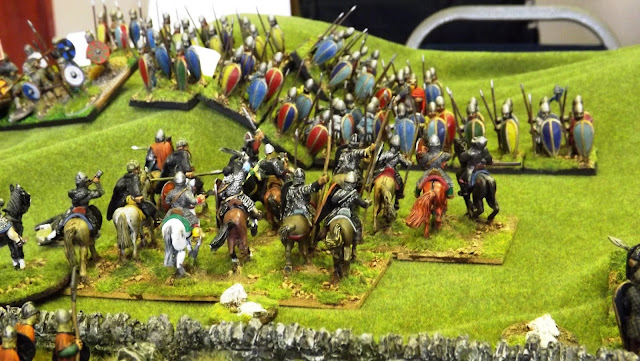 Junker and Tusk are unhappy and accuse everybody of everything and Brexit is still 950 years, god
knows how many wars and a referendum away. Meanwhile in France the King, Tony Blair the first, has been accused of getting his intelligence chiefs to “Sex Up” the intelligence to enable him to launch an illegal war against those poor Saxons. 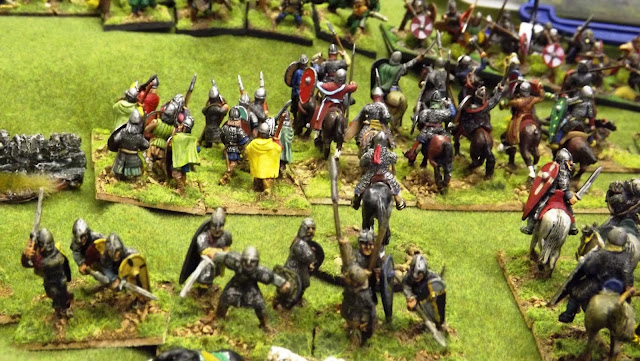 No political opinions intended, much. 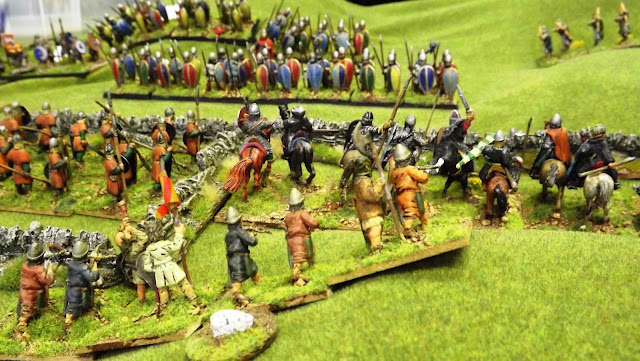 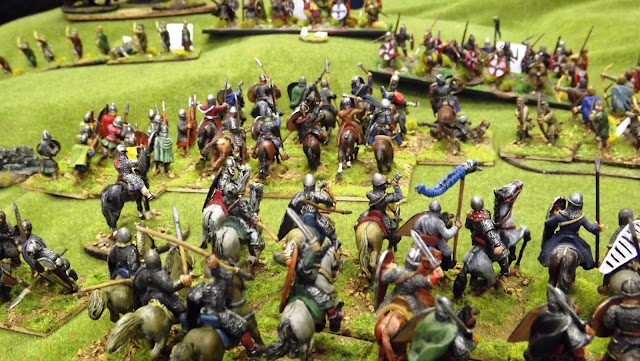 On the whole I think everyone enjoyed the rules if not the outcome. Nathan and Steve L were well and truly out thrown. Personally (Steve L) I am not sure that I like the “unit does everything before moving” bit. The game seemed to stutter a little bit. As an alternative to Hail Caeser it has somethings going for it and I will certainly play then again. It was, after all, only the first time that four of the five had played them. Three or four more goes and I will give you a definitive opinion.

Game Report by Mr Steve L.
Pictures by JJ.
Posted by carojon at 16:32