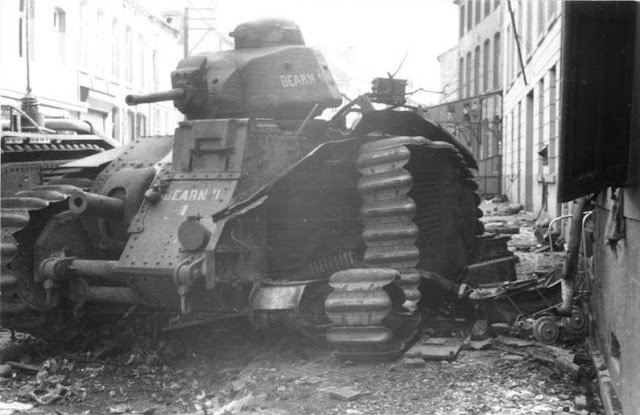 One of the games played at this month's gathering of the DWG was this 1940's clash in the Battle of France when French tanks counter-attacked the Sedan bridgehead at Stonne, 14km south of Sedan overlooking the Meuse river valley.

As German armoured spearheads carried out their charge to the channel it became imperative for the German infantry to move into the Sedan bridgehead to secure the German lodgement and protect the supplies that would follow.

German infantry was still the foot-slogging, horse powered entity that had entered the first war and it would take time for them to catch up the rapidly moving motorised elements thus providing an opportunity for French forces to counter-attack before the German lodgement could go firm with the infantry defences in place. 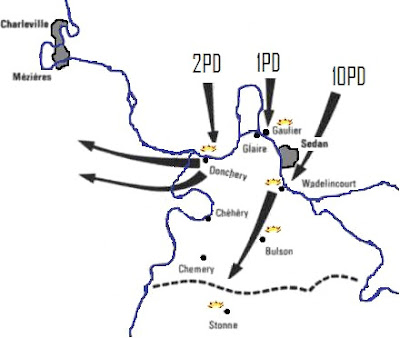 The town of Stonne with it's strategic position overlooking the Sedan crossing soon became a focal point as 10th Panzer Division along with Gross Deutschland (GD) Panzer Grenadiers were quickly moved to secure the area in the face of significant French forces including their heaviest tanks. 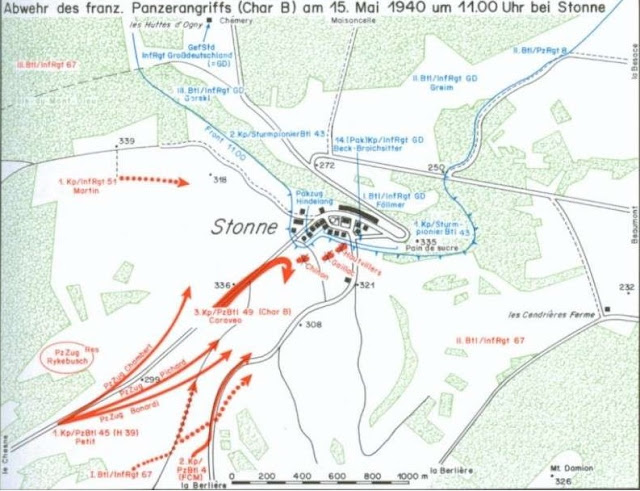 Over the course of several days of heavy fighting, the town would change hands several times as both sides struggled for dominance and with the German attack in the west very much in the balance on the outcome of this battle.

In the end, despite French heroics culminating in the single handed attack by French tank commander Captain Pierre Billotte in his Char B1 who penetrated the German defences destroying two Panzer IV's, eleven Panzer III's and a couple of guns whilst receiving 140 non-penetrating hits on his tank, the town was held by the Germans when Stuka dive bomber support was brought to the defenders aid.

Our game was representing one of these attacks as French infantry having been forced out of the town were back on the offensive as they were joined by yet more French infantry supported by tanks.

In the town was a company of Gross Deutschland (GD) infantry with company assets including an HMG, light mortar, infantry gun and anti-tank gun platoon.

At some stage they could expect reinforcements of a StuG company and a further two platoon company of GD infantry.

The rules we were using were second edition 'Fireball Forward!', a set I had seen in action last year at the Devizes wargaming show and was keen to try out, being more familiar with the Lardies, 'I Aint Been Shot Mum' thus keen to compare and contrast.

Fireball are modelled on the next level up with bases of infantry representing sections and companies as units, but as far as I could see they would be easy to use at the IABSM level of groups and platoons.

Activity is driven by drawing out playing cards from a standard deck with red and black suits determining which sides forces get to activate, thus four black suit cards, followed by a red suit card would allow the German player to activate four units(companies) one after another unless interrupted by use of a limited number of initiative grabbing chits. The initiative would then revert to the French and continue for every further red card drawn and so on until all units had activated.

Our game was time limited to eight turns to put pressure on both sides to be holding the majority of the built up area on the northern edge of town held by the GD infantry at the start of play. 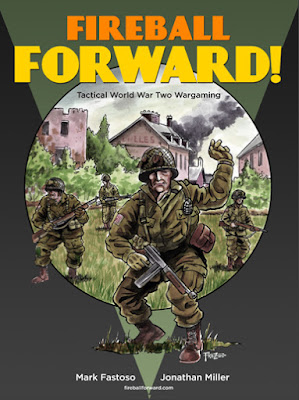 The French attack began with the French infantry that had been pushed out of the town earlier by GD infantry, moving to a hedge line on the western approaches and whilst taking infantry gun fire and light mortar attacks pushing over the road into the first block of houses opposite the grey house held by GD 3rd Zug.

Eager to try out a combined assault the GD with a combination of three activation cards laid down yet more mortar/IG fire on the French suppressing three of the four French infantry bases, before launching a close assault by the GD 3rd Zug from across the road.

The GD got the worst of it as they came to grips in the houses and were repulsed a platoon leader and section/squad lighter as the survivors fell back towards their company HQ.

With all the fun of infantry close combat going on in the west-end of town, French heavy tanks entered stage right or on the road from the south, moving slowly and rather cautiously.

Knowing the difficulties my anti-tank gun assets would have dealing with the French monster tanks and the likely ill-effects my infantry in the buildings might suffer from their 75mm guns, the GD wisely held their fire.

The Char B's were soon followed up by lighter but no less formidable Hotchkiss models with French infantry following.

My French opposite commander was conducting a French infantry tank attack, with his armour moving at infantry speed to stay in close proximity to his foot troops but buying the Germans much needed time.

With the defeat of the GD 3rd Zug, the forward defences under 2nd Zug started to come under sustained and heavy tank fire as the French tanks "brassed up" the buildings in front of them.

However by turn three with weight of numbers favouring the French and with the three GD infantry sections and a platoon commander destroyed the German company was looking decidedly wobbly as the French threatened to close with the defenders.

Relief couldn't have come at a more opportune time as with the fourth turn German StuG's drove into the town from the west shelling the buildings on the road and destroying two French infantry sections in the process and forcing the  others to fall back to the forces attacking from the south.

The counter-attack by the StuG's had relieved the German company commander of one headache allowing him to redirect the fire of his IG and mortars towards the French main-force attack.

The StuG's now had control of the road running across the face of the French attack from the south and threatened any French units from the flank that attempted to cross in front of their guns.

A Char B attempted to deal with the threat by firing down the road with its 37mm gun only to see the shots bounce off the StuG's heavy front armour.

Following close on the heals of the StuG's a second reduced strength GD infantry company (Two Zugs with AT Rifle and HMG support platoons) arrived on the northern outskirts of town having climbed the steep road up from the valley below.

These infantry reinforcements allowed the GD to move in to secure buildings on the eastern and central sectors of the town backing up the forward elements of the initial defenders.

As the French tanks and infantry edged ever closer to the the forward buildings manned by the GD, the German AT guns held their fire waiting for the best opportunity of surprising the French tankers.

One of the two gun teams had little choice but to open up frontally as French infantry closed in on the grounds of the grey house held by 2nd Zug.

They managed to squeeze off two rounds which bounced off the oncoming Hotchkiss before succumbing to the fire of the approaching French infantry.

Throwing caution to the wind and with the eighth turn rapidly approaching the French went for it, standing off with the Char B's to provide covering fire on the buildings occupied by 1st and 2nd Zugs, the Hotchkiss tanks and infantry moved against 2nd Zug.

The battle reached its crescendo as the French and Germans fought bitterly in hand to hand in the house occupied by 2nd Zug. Clearing the ground floor the French took the fight upstairs as the lower floor was then counter-attacked by 1st Zug GD infantry from the house behind.

With the Hotchkiss tanks now presenting their flanks the last of the German PaK's opened up from an orchard on the eastern town-approaches and gained an early success as the first target exploded sending its turret up in the air.

The French tankers ignored the surprise fire and their armour shrugged off further insult as they poured their fire on the buildings to their front in support of their own infantry.

The game was called at the end of turn eight with the grey house still contested and little chance of the French making further headway in the time allotted. Thus GD were deemed to have done enough to secure their hold until the next French attack.

This was a great scenario with the battle in the balance for much of it as the weight of French fire battered the Germans and the French infantry threatened to overwhelm them. Perhaps if the French had moved some of their tanks forward more rapidly and closed unsupported, the German defence might have been unhinged by the follow up attacks.

The rules play very well and both Tom and I were soon getting our heads around the different dice combinations used to calculate hits from the various weapons. I particularly like the use of D20 or D10's to randomly determine effective range from one fire to another thus preventing the predictable, "I'll stop my advance right here to be just outside of effective range" approach to gaming where weapon ranges are constant, but allow that unreality of combat to occur.

Our playing of the game for the first time was greatly enhanced by having Si B as our game-meister for the day and thank you to him and Tom for a very fun day.