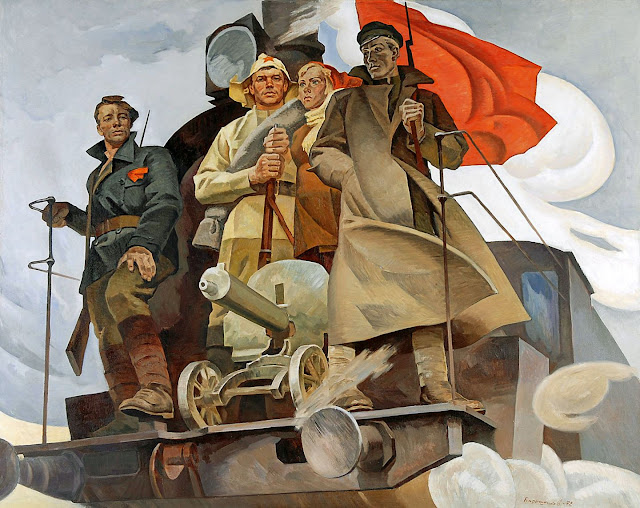 I knew I should have been suspicious when Chas invited me to join him on a slow train to Dushak (in modern day Turkmenistan). He told me that it would be a pleasant journey to Transcaspia, where we would meet a cosmopolitan mix of people from all over the world. He neglected to mention that the train was armoured, mounted a 75 mm field piece and three HMG's and that the people we were going to meet were Sikhs and Turcomans of the British Malleson Mission. 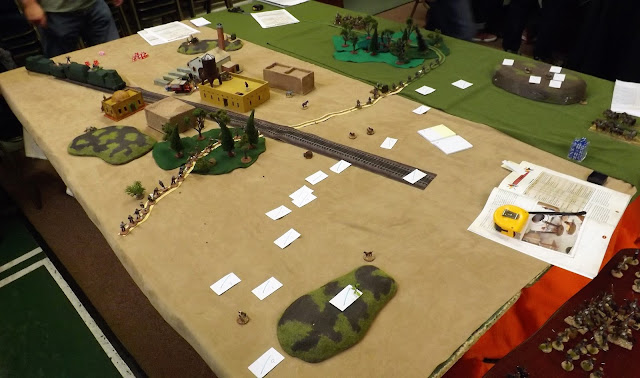 We deployed towards a line of trenches defending Dushak, I led my Cheka force into a wood on our left, supported by Bolshevik cavalry, Bolshevik infantry lined the trenches, whilst railway workers deployed in the town supported by HMGs and field batteries. Naturally Commissar Chas remained on the train with three of his Red Army companies. 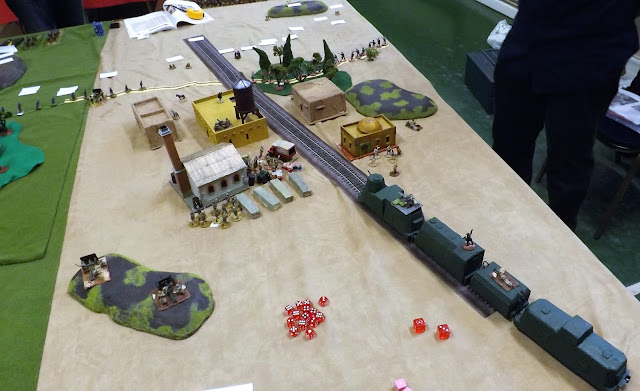 At dawn the British attacked the trenches. A battalion from the 19th Punjabi regiment led the advance. They were supported by three batteries of artillery and an HMG on a hill to their right. A troop of the 28th Light Cavalry was on the same flank, with Turcoman infantry and cavalry, supported by White infantry and guns on the left.

The battle opened with the Punjabis making short work of a company of Bolsheviks in the trenches and engaging their supporting 75mm battery at close range. The 28th Light horse routed their Bolshevik opposite numbers, whilst the Turcoman and White infantry advanced on the other end of the trenches. 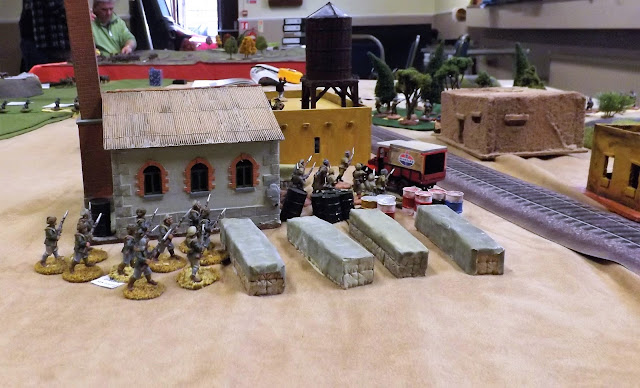 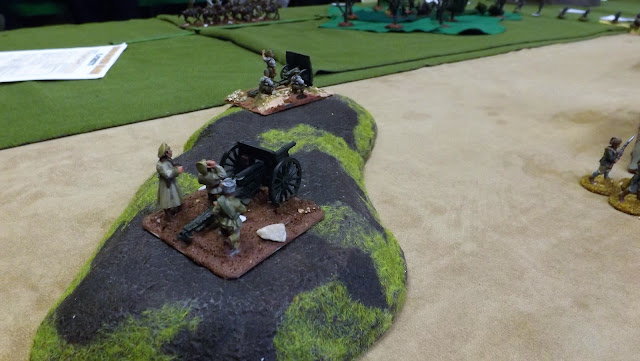 As the Punjabis pressed on, they came under effective fire from the red field pieces and HMGs on high ground, leading to them seeking cover in the woods. On the other side of the field, entrenched Bolshevik infantry were attacked by White infantry and Turcoman cavalry. 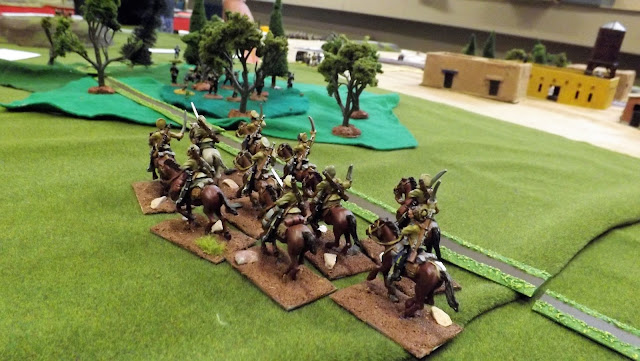 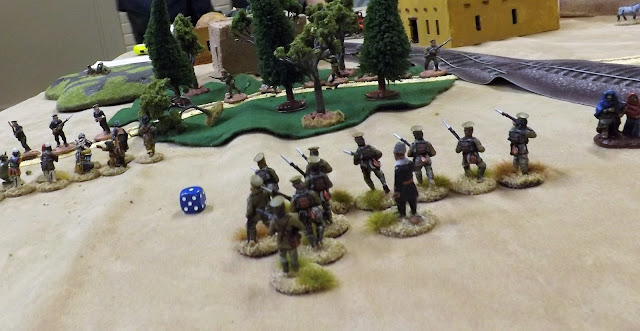 Encountering a force of Cheka in the woods, the Punjabis soon saw them off, but their own casualties to red heavy weapons were starting to mount. Similarly the 28th cavalry were forced to dismount and seek cover in the trenches, as 75 mm shells burst amongst them. British guns attempted to relieve pressure on the Punjabis, by firing on the Bolshevik guns and succeeded in driving one battery off the hill. 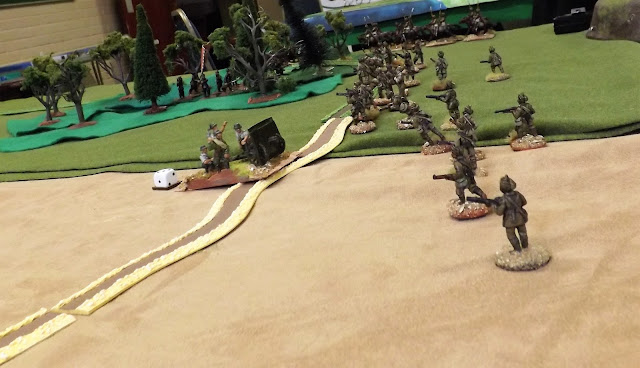 With the armoured train 'beasting' the Punjabis with fire and three platoons of Red army infantry supporting the right hand trench, the Turcoman and White attack was driven off and the Punjabi infantry's advance slowed. 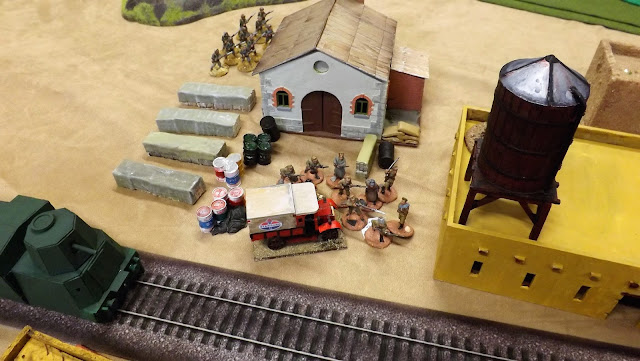 Fire from the train and red units in the town had forced the Punjabis to go to ground and neither side looked capable of sustaining a sensible attack. The commanders agreed a local truce and both sides withdrew from the field. 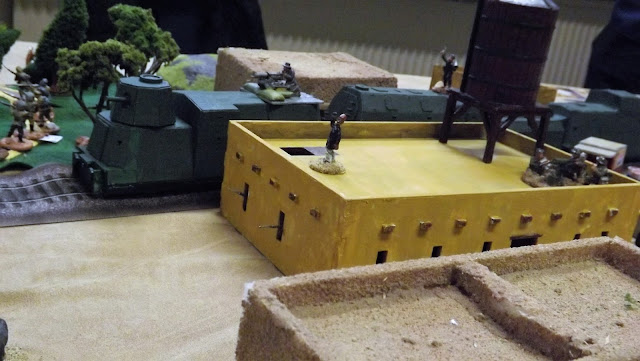 As usual Chas provided an entertaining and obscure battle for the scenario (who has ever heard of Dushak?), which was played to "Setting the East Ablaze - Back of Beyond Rules" in 28mm. The rules gave a fast paced game, with some simplifications that are needed in such a large game. 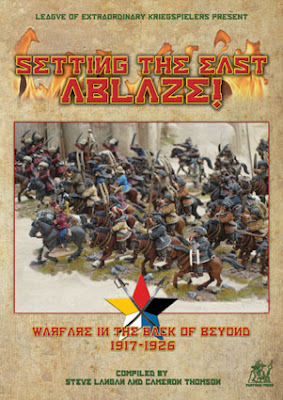 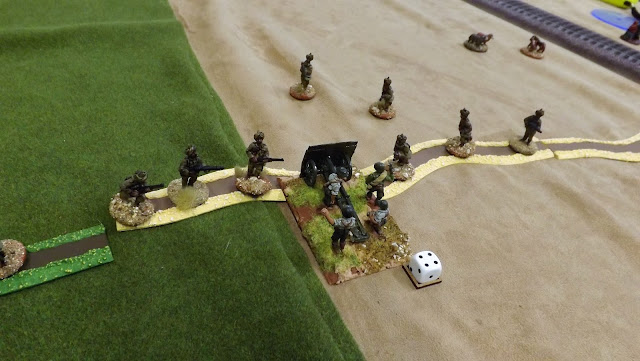 Historically the British force drove off the Bolsheviks, inflicting over a 1000 casualties, whilst taking a quarter of that figure themselves. Most of the fighting fell to the Punjabi battalion, with the local Turcoman forces proving next to useless, only joining in when the day was won.

All in all a good day out and Chas's "croupier rake" was much in evidence to clear up the casualties.

Many thanks to Chas and Steve H for providing the figures and running the game.

Labels: 28mm, Back of Beyond, Russian Civil War