A Rumble in the Desert - Battlegroup Tobruk 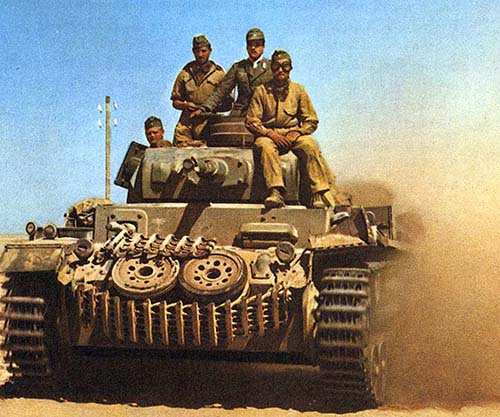 It’s not unusual to have ‘Steve’ put on a game in the club, but this month it was a rare sight as my
WW2 desert armies made an appearance!

I've built up fair amount of 8th Army, DAK and Italians over the years, and they have appeared
previously on these pages, but my ‘go to’ set of rules has always been FoW. These are not particularly favoured within the club, so the figures have not seen the light of day for probably a couple of years and I've not even considered version 4! 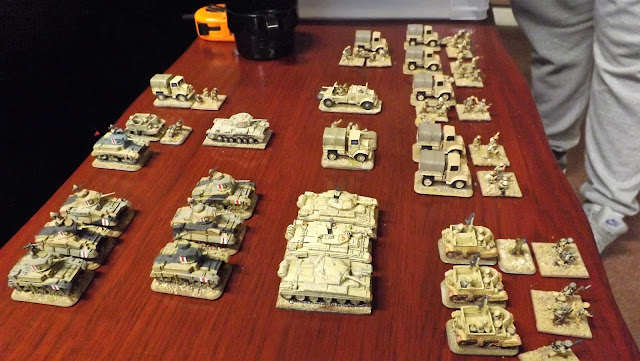 The release of Battlegroup Tobruk by Iron fist publishing, made me think that maybe I could redress
that, so I purchased the rules a few months ago, had a play around with a bit of a solo game and
committed to putting on a club game. 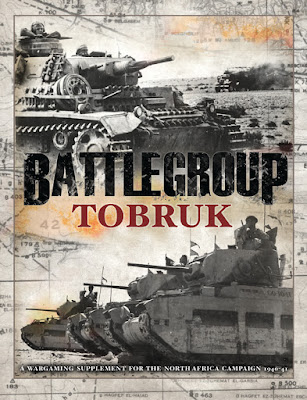 I’ll not go into a ‘rules review’, just give an overview of the game and some thoughts. 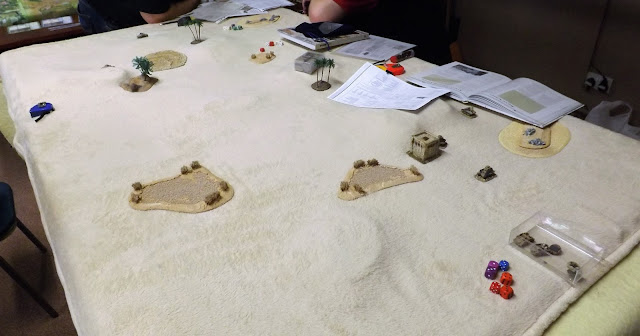 I wanted to get a mixture of ‘toys’ onto the table, to see how the rules handled things, so didn't go
for an historical scenario or forces. Love them or hate them, Battlegroup uses a ‘points’ system, so I
put together forces of company strength, equal to just under 900 points, based on an armoured battlegroup.

Additional fire support consisted of a timed 4.5’’ barrage and a timed 6’’ howitzer barrage, which
have to be pre registered on the table, and a turn of arrival declared. There was also a ‘counter
battery’ fire mission available. 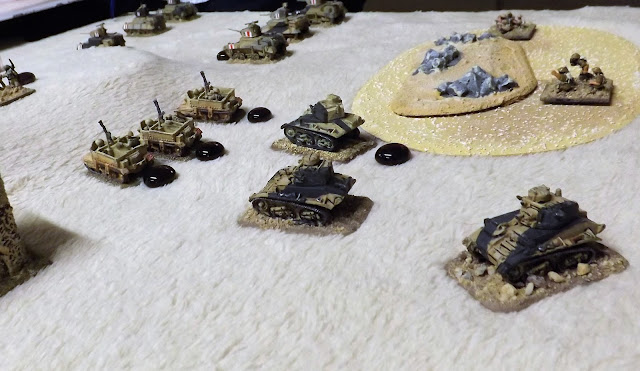 The scenario was the ‘Attack/counter attack’ scenario taken from the main rulebook, with Nathan &
Jason taking the DAK, and Si and Chris the 8th Army.

The DAK deployed their Panzer II’s, III’s & IV on their left flank, while the Brits deployed the Honey’s to counter. On the DAK right, the 50mm anti-tank guns came on and deployed at long range, soon to be supported by the M13/14’s and the infantry platoon with supports. On the British right, both 2 pdr anti-tank guns and the Valentine tried to keep out of sight behind the hills, while the Crusaders deployed in the centre, followed in the later stages by the infantry. 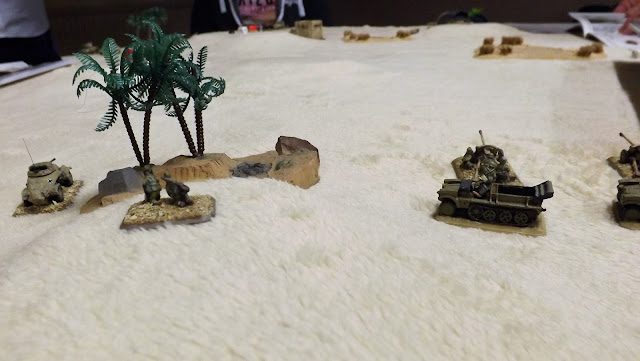 The main combat took place between the Panzers and the Honeys, with the Honey’s generally getting
the worst of the encounter. On the other flank, the 50mm took long range shots at anything in range, while the Crusaders took long range pots at the M13/14’s. Consequently not a lot of damage was done.

The German timed barrages were effective, taking out the FOO and the carrier officer who was also
able to call in mortar support. Unfortunately the 8th Army were not quite so lucky!

Force cohesion is based on the total ‘battle rating’ (BR) of each force, with each unit contributing its
own BR to that total. Reduction of that BR is based on drawing a ‘chit’ each time a unit, or objective
is lost. Each chit is numbered 1-5 and when one is drawn, it reduces the Force BR by the associated
number. When a Force is reduced to 0 it is adjudged to have lost its battle effectiveness. There are
also ‘special’ chits which may cause an enemy unit to breakdown or run out of ammunition, or a
friendly unit to carry out an ‘heroic act’. We had some of the former, but none of the later. 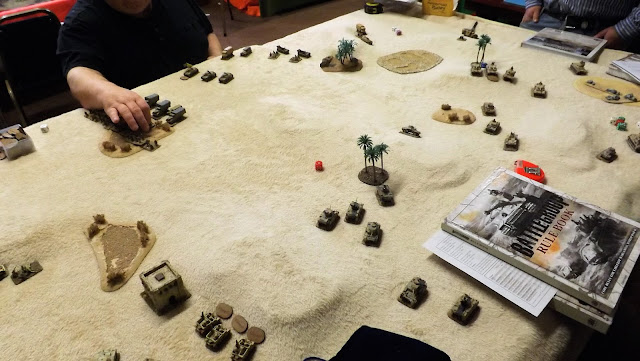 Because I wasn't keeping detailed notes, exact details of what took place are a bit hazy, but by the
time we called it a day, each Force’s BR was only down by about 50%, so maybe a company level
game is too big for a club day? Although both sides were doing a lot of long range shooting!

I enjoyed putting on the game, but didn't know the rules as well as I thought! The basic mechanics
are simple enough, calling in and firing artillery appeared quite involved, and against armour took a
bit of working out.

Once everyone got familiar with the basics, turns flowed quite quickly. Spotting every turn before firing takes some getting used to, and we weren't sure if some of the factors were totally effective. 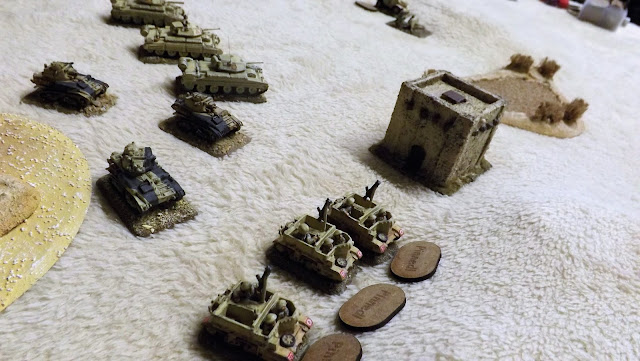 There’s no ‘automatic’ spotting of infantry, even if you’re right on top of them and no ‘tank assault’. This was one of my bug bears for a desert game, as I like to think I'm quite well read on this period. The rules even make comment on infantry vulnerability in this theatre.

Nathan did think there was a ‘gun shield save’ when shooting at a/tank guns, but we couldn't find it in the rules and I think that’s from FoW. 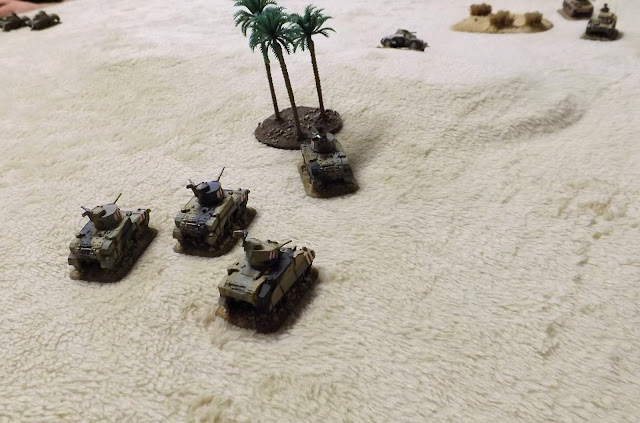 Overall, I’d give them another go, not a perfect set of rules in my opinion, but maybe a few ‘home
grown’ amendments in the future? 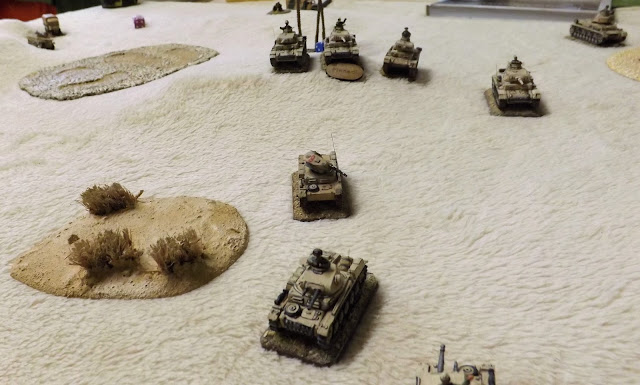 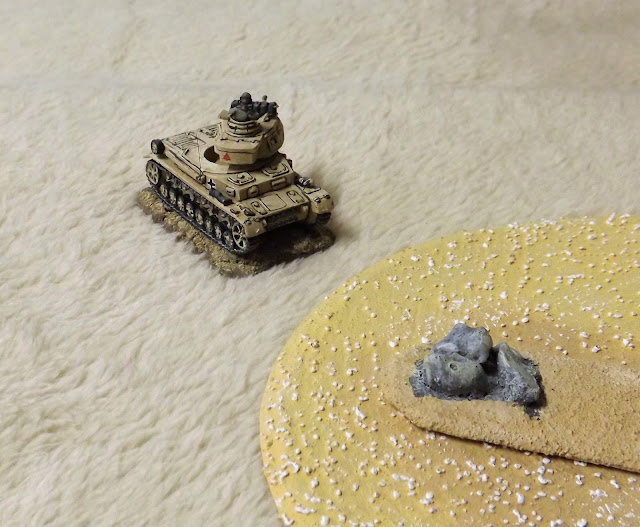 Thanks to Nathan, Jason, Si & Chris for playing in the spirit, and putting up with me spending most of the time with my nose in the rulebook! It was good to get the desert stuff on the table again. Most
of the armour is Battlefront, with a smattering of Skytrex, mostly pained by JJ. The anti tanks guns
are all Battlefront, again by JJ. The infantry are a mixture of Battlefront, Skytex and Peter Pig, mainly
by yours truly – Steve M
Posted by carojon at 08:26