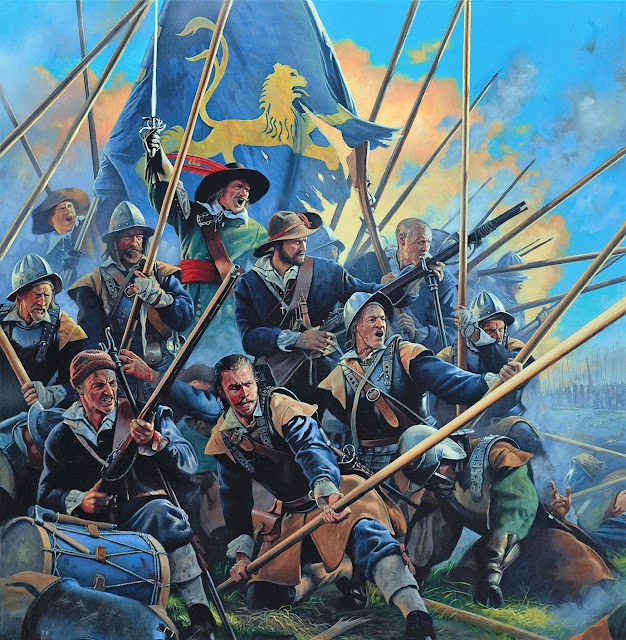 This was our first attempt at using Pikeman's Lament and as we had had great games with it's stable mates we thought it was about time we gave it a go. We played a scenario from the rulebook (Storm the Redoubt) and used about 54 points of troops on each side split between the four players. 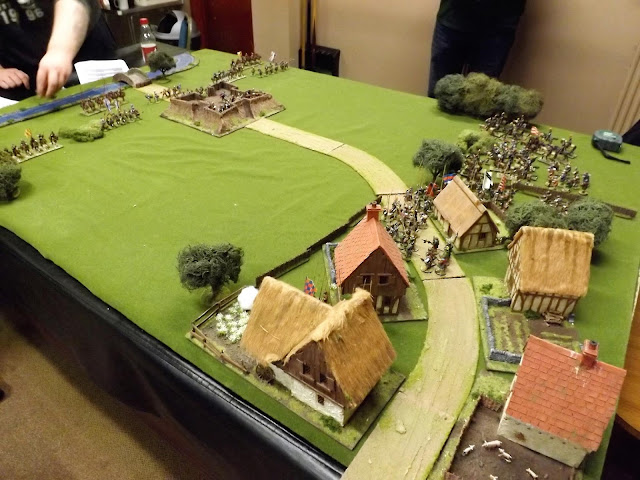 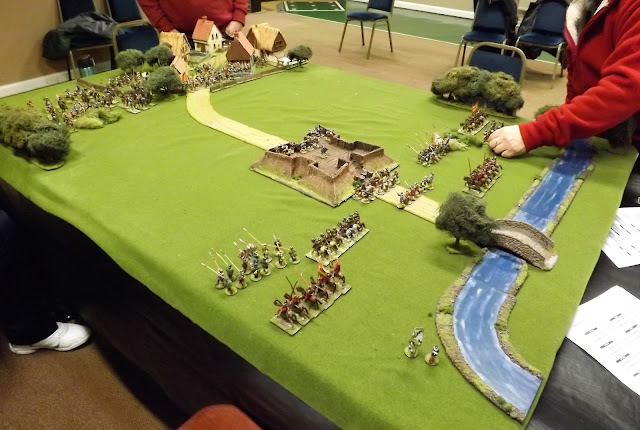 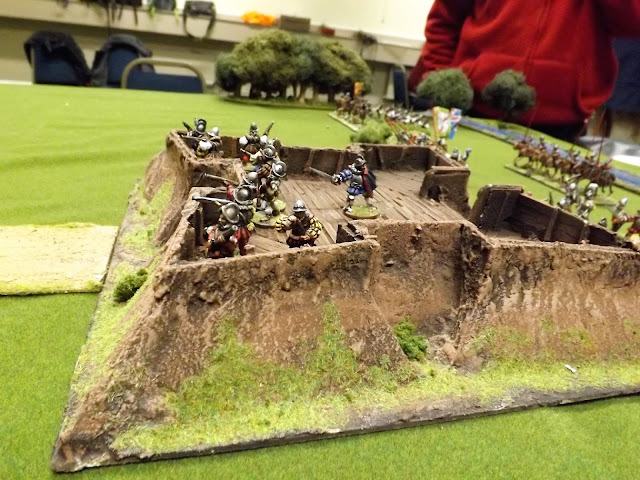 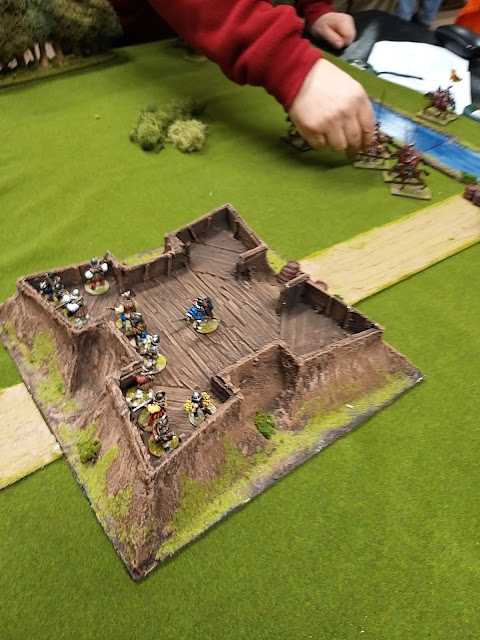 The Spanish started with a unit of shot and the Swordsmen in the Sconce and quickly moved a second unit of shot in order to bolster their defences. The Dutch split there forces into a one that contained all the Horse supported by two units of shot on the right flank and all the pike and the remaining shot coming through through the village on the left. 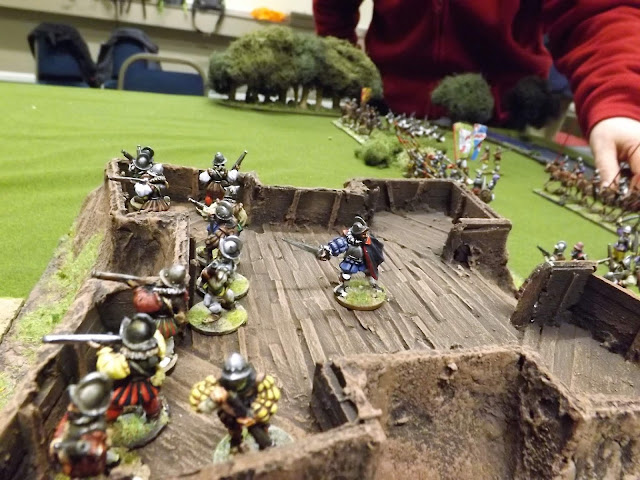 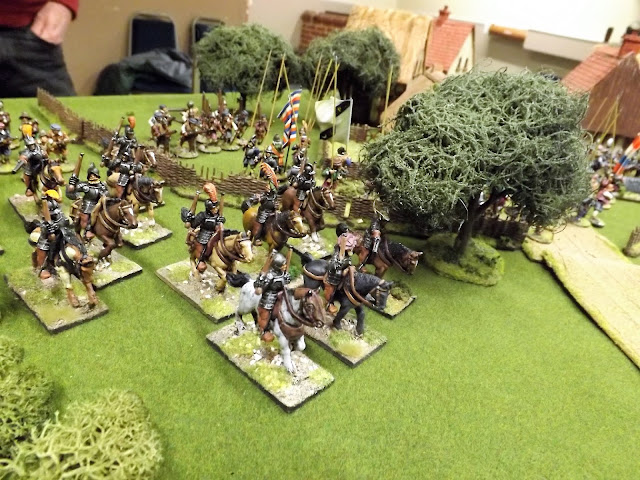 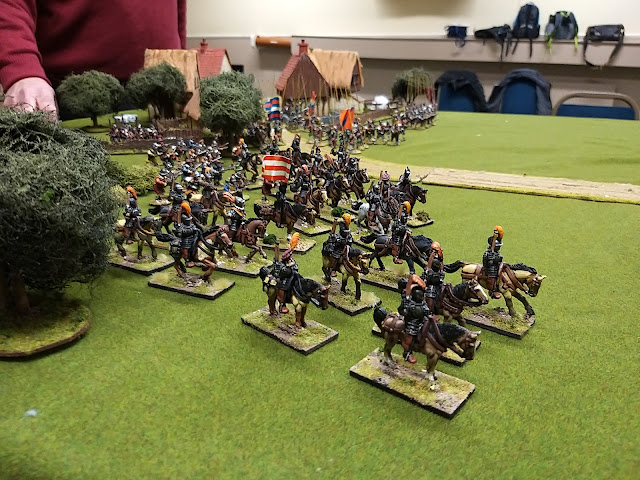 The Spanish moved most of their pike to their left to deal with the German mercenary horse and left the last pike unit and a unit of shot on the right flank. They spit their Horse evenly between the two flanks. 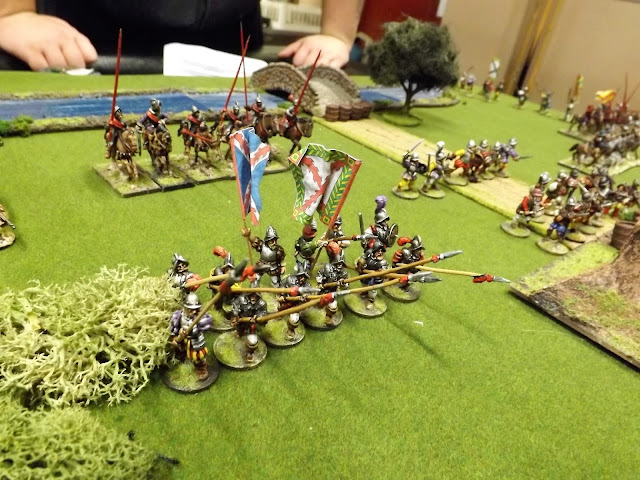 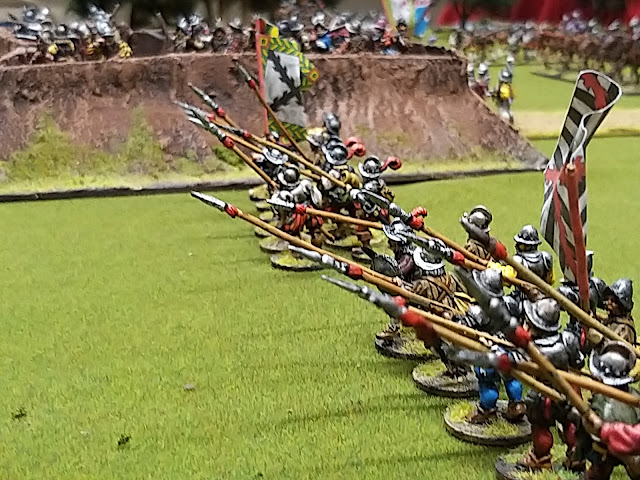 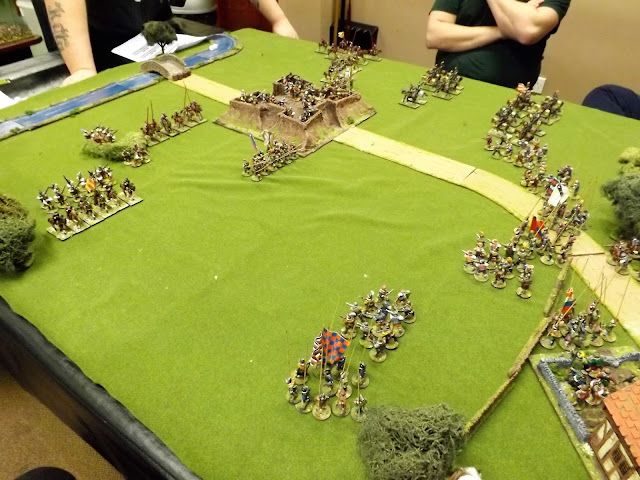 Most of the action early in the game happened on the Dutch right flank (the Spanish right took a long time to do anything as their commander repeatedly failed his activation rolls and they glumly stayed stock still). The Reiters came on gave one of the pike units a quick bloody nose and almost immediately their commander decided they were needed elsewhere and they left the field (a double 1 on the activation roll meant that a special event was rolled and they were taken off the board). 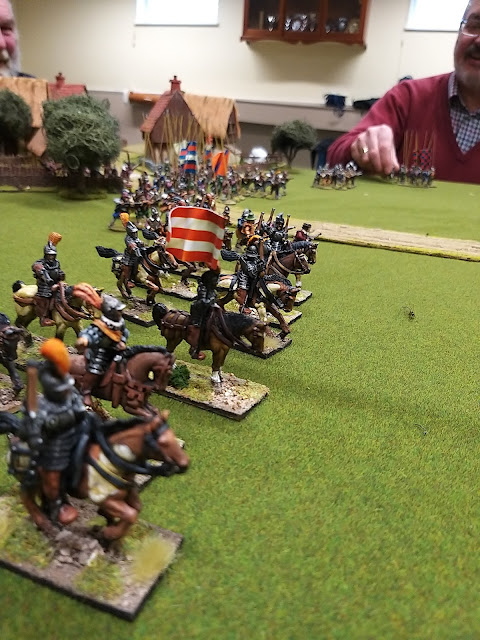 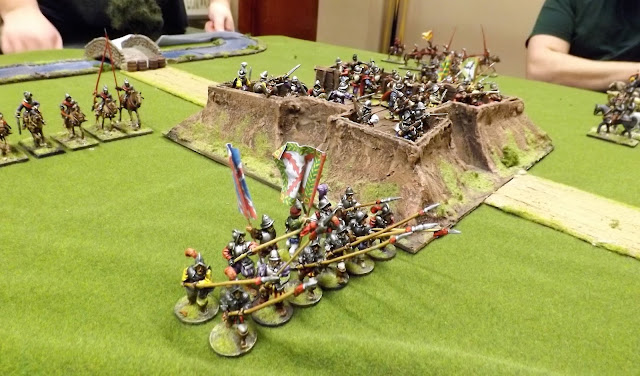 The Germans, however were taking a pounding from the shot in the sconce and were keen to close with the Spanish Horse in order to avoid more of the same. On the other side of the field the Spanish and Dutch foot were tentatively moving toward each other with the Spanish Lancers eyeing up a unit of shot that was straying from the protection of the pike. 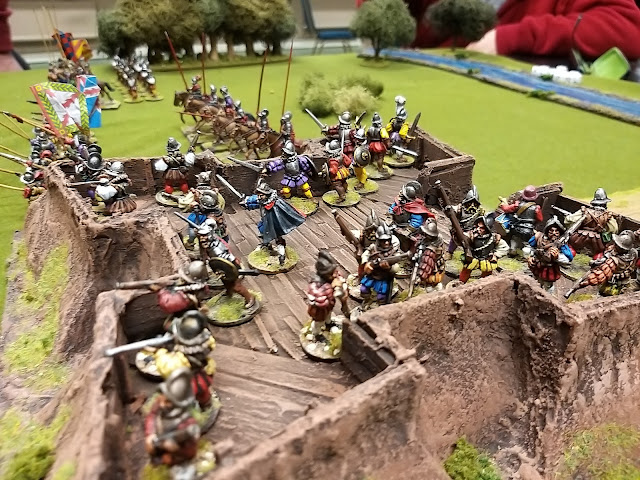 First into action was a the Spanish mounted shot, however, who were first to feel the hot lead that the Dutch men had saved up for them.

Meanwhile in the Sconce, double 6's on activations meant that some Heroes of the Spanish Empire had heard of the importance of the battle and come to join the fight, bolstering the countrymens courage. 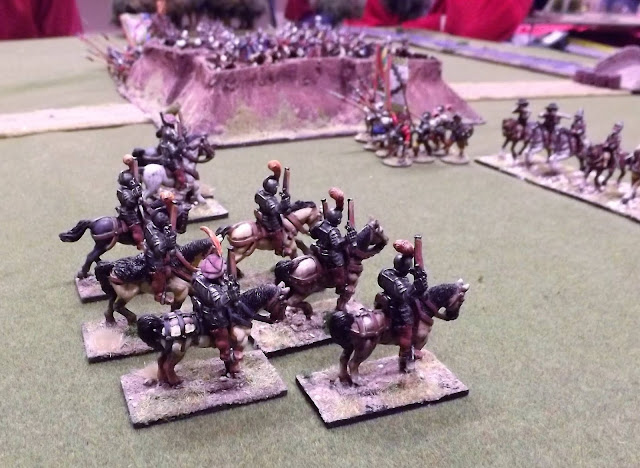 The fire from the Sconce and the charges of the Spanish Lancers had broken the resolve of the German Mercenaries and the last of them was chased from the field, at the same time the exhausted Spanish horse left leaving the flank in the hands of a beleaguered unit of shot and some mounted arquebusiers. 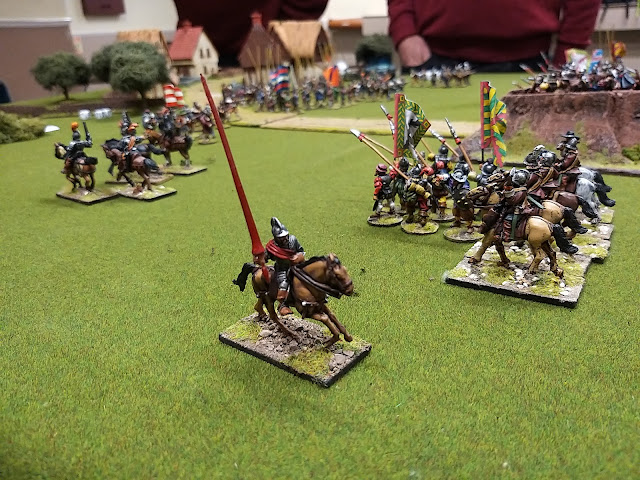 Within a round the Spaniards outside the Sconce collapsed, the remaining horse fled and single unit of pike remained on the right flank. Caught flat-footed, the Dutch tried to regroup, only minutes ago it appeared as if they were surely to be beaten but now there was a chance to gain some victorious pride for their homeland.

The veteran shot and the remains of the shot units from the right flank scrambled towards the sconce.
The pike and Halberdiers form the left fought their way up the slopes of the redoubt in the face of determined opposition! 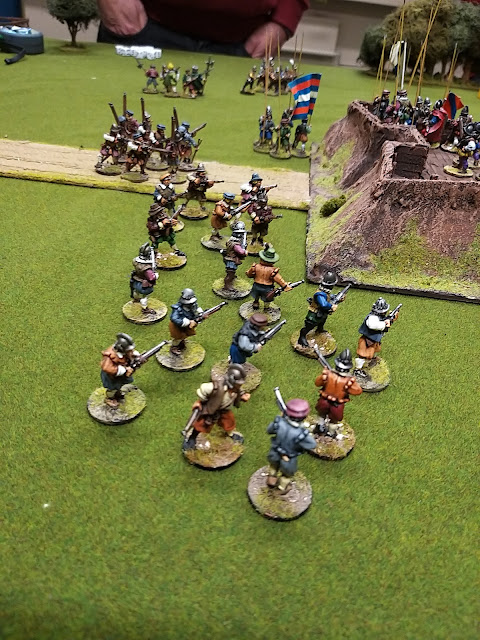 Back and forth the battle raged with the Dutch first gaining and foothold only to be sent tumbling down again. The Spanish pike seemed shocked at what had happened to their mighty force and stood immobile with indecision. All the while the Spanish in the Sconce were being whittled away by the attacks from the Dutch, one unit of shot panicked and fled, leaving only two hard pressed groups battling for the sconce! 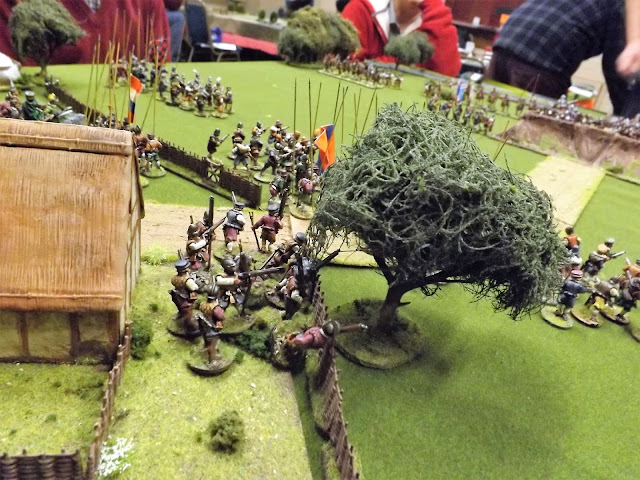 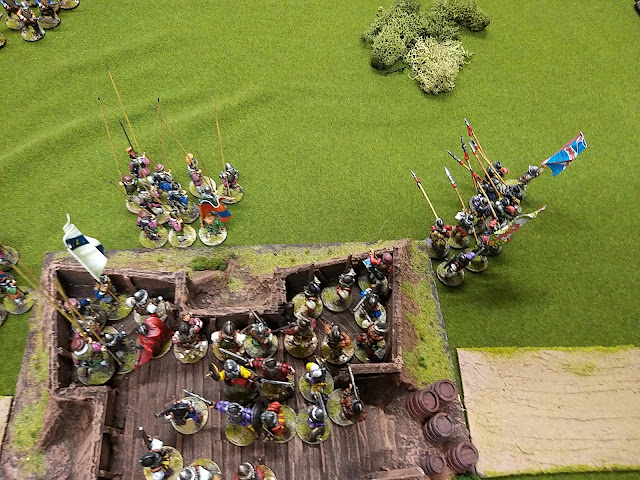 With one of the Spanish units gone, the Dutch shot, who had suffered so badly from the Spaniards fusilards, gained the walls of the earthwork and were able to bring their full force to bare on the desperate Spaniards. Beset on all sides, first one, then both remaining Spanish units in the Sconce failed to hold onto their morale and swiftly taken prisoner by the jubilant Dutch, surrendered to the inevitable. 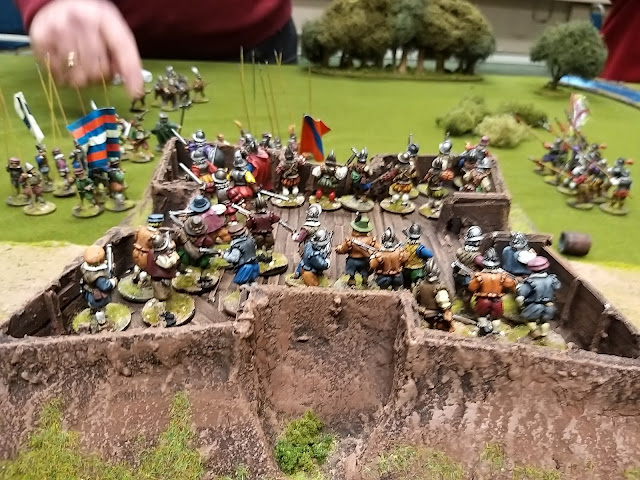 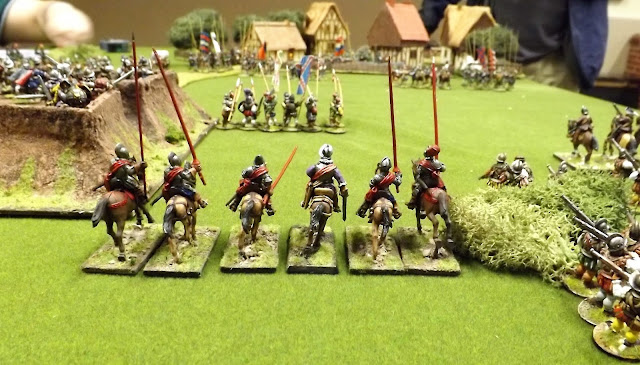 Pikeman's Lament gave a great game and we managed to fight to a conclusion within two and a half hours. 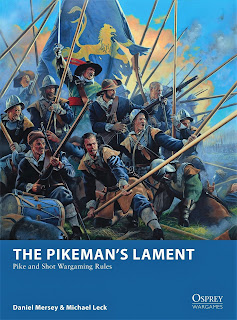 We did get some of the morale rules wrong at the start of the game but it didn't make too much difference to the outcome. We all had a great time, thanks to the boys for playing in a very gentlemanly manner, right to the end!
Posted by Whiskey Priest at 08:55