Teutons and The Battle of the Snowman - Hail Caesar 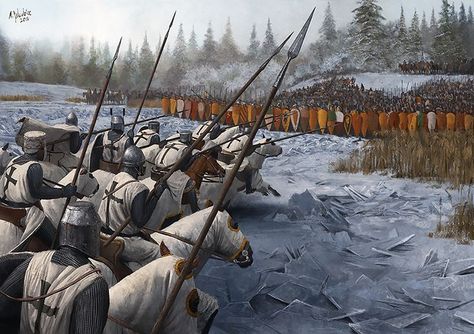 Battles in snow clad terrain tend to be rather eye-catching affairs especially in periods of yore when gaily coloured forces often as not lined up to face each other across a vastness of white.

One such period that offers a chance to model such a clash is the Teutonic Order of Knights and their push for dominion in the east against the Baltic tribes.

Our scenario saw the Slavic forces lined up, rather sensibly, behind an unknown, well unknown to those of us commanding the Teutons, frozen river barrier that had potential to disorder and generally mess up any attempt to come crashing across it, in spite of any perceived solidity.

If that wasn't bad enough, their confidence in their position shone through, in that they had obviously taken the time to build a snowman which chimed perfectly with the taunts in broken German drifting across the snowy waste suggesting our parents smelt of elderberry and to go away with out stupid German Kernigits before they would taunt as some more!

Well any self respecting Teutonic Hochmeister wasn't prepared to put up with that kind of nonsense from some anonymous, badly groomed, and very smelly Slavic peasant, no matter how big and sharp those axes looked.

Taking stock of the enemy position securely lined up on their river with woods at either end and a mass of spears, archers and axemen awaiting any rash assault, with heavy cavalry and horse archers hovering behind in close attendance, we Teutons decided to create a 'Schwerpunkt', something that would become a favourite tactic of later generations, but I assure you, we invented it first!

So in accordance with our cunning plan Nathan led our heroically, or is that hysterically, brave infantry across the snow towards the right flank of the enemy position, protected on their right flank by a refused advance of massed German knight types covered in plenty of metal and carrying very long sharp sticks.

This cunning plan had two advantages in that it left a lot of the nastier enemy types staring at open snowy waste, wondering if they should come on over, the water is lovely, and should our hysterically brave infantry do the business, not only would they unhinge a very difficult position but they could equally deal with that insulting snowman.

Of course, you can always trust such dastardly foes as these peasants obviously were, to not play fair and so they sat doggedly behind their frozen barricade content to push forward a mass of of foot and horse archers to pelt our brave lads from front and flank with very annoying and dangerous arrows, likely to take an eye out if not very careful.

Well this insufferable tactic couldn't be borne for long, so in went the infantry types who soon started to gain ascendancy on the enemy right flank, knocking down that little snowy dwarf as they went and generally upsetting what till then had looked a very tidy line.

Meanwhile on the right amid arrows, our brave light cavalry spears supported by some heavy sergeants, with the occasional push back, eventually forced the enemy horse archers and foot skirmishers to back away from our right flank as the Hochmeister led forward the serried ranks of our finest knightly orders.

With the enemy right turned and pushbacks starting to happen along the line behind the river, the time had come to see if our 'donkey wallopers' were very overpaid and had an exaggerated sense of their own self worth or if rumours of their martial abilities were really true.

So unleashing the dogs of war, the first ranks of heavy Teutonic knights charged over the ice and thankfully nothing happened, I mean it held firm and no one slipped.

Before you could shout 'don't point that bloody thing at me!' the flower of German knightly manhood were across the ice and prodding peasant types back from where they had come from, breaking one unit of spears in the first charge and turning in on the flank of some rather large hairy chaps, carrying two handed axes.

This latter confrontation proved to be most beneficial after the experience of fighting these chaps from the flank underlined the extreme risk of tackling them from the front whilst ones horse was desperately trying to maintain its footing on a frozen iced up river.

However as so often happens in these types of actions once a gap has appeared in an apparently secure line and with a flank being remorselessly driven back the initiative and direction of travel starts to roll in one direction, not to say that the Teutons had it all their own way, but by the closing stages of our game, the position on the river looked compromised and the snub of the snowman comprehensively avenged.

Thus the peasant hordes would wake up the next morning to the comforting thought that feudalism was here to stay and everyone knew his place in the order of things, just as it should be!

Anyone fancy a quick crusade to the Holy Lands?


Thanks to Mr Steve for bringing down his excellent 15mm collection to play with and to Steve L and Nathan for adding to the fun.