REBELS AND PATRIOTS in the French Indian Wars 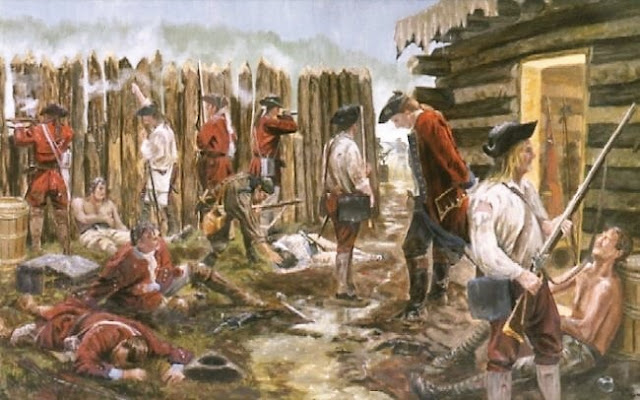 At the last club meeting, Steve M bought along his lovely French and Indian War collection of toys for us to play with. We used the Rebels and Patriots rules by Michael Leck and Daniel Mersey, published by Osprey https://ospreypublishing.com/rebels-and-patriots , using one of the scenarios from the book. Each side had a mixed force of twelve units made up of Regulars, Provincials, Militia, Light Infantry, Skirmishers and Natives. The British side had a team of engineers who were tasked with building a bridge over the river which separated the two forces. The river was difficult to cross, although there was a ford at the far end of the table. 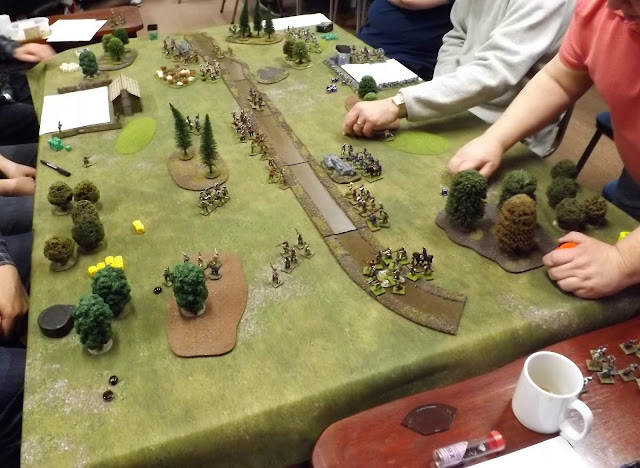 None of the players had played many games using these rules, but they were easy to pick up and provided an enjoyable game, and it is a game rather than a simulation. Activation of units is by rolling a modified 6+ with two D6’s. Roll a Double 6 or a Double 1 and stuff happens. More of this anon. Shooting is worked out by rolling 12D6s for Regular Units, 6D6s for Native Units and Skirmishers. Depending on the quality of the troops, a hit is scored on 5+ or 6+. You normally need two hits to cause a casualty and this is modified depending on cover and formation, so if the target unit is in soft cover or skirmish order, three hits are needed to remove a casualty; a skirmish unit in soft cover needs four hits and so on. Simple and quick. Moral is similar to unit activation. Roll a modified 6+ on two D6’s and your units keep smiling. Roll below and Disordered and Retreating come in to play. Roll a modified 2 or less and it’s time to pack your toys away. 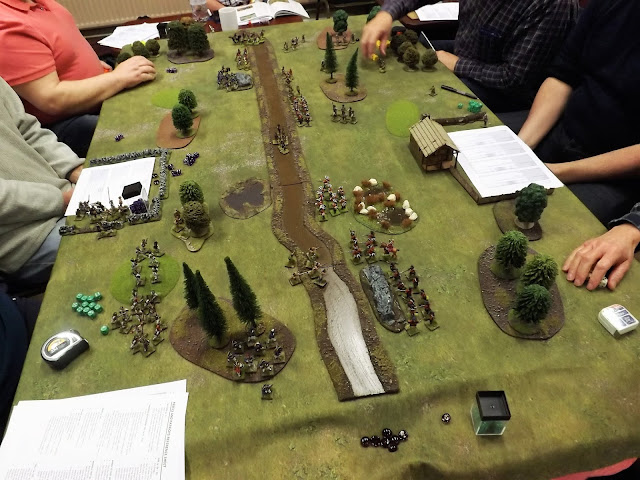 We played the scenario twice, changing sides. As I was on the flank in both games, I will leave it to someone who was in the thick of it to provide a battle report.

He gave a grunt of satisfaction. His planning application for a bridge had been approved, despite objections from the White Coats. No more trekking several miles downstream to the ford for his daily journey to the hostelry on the opposite bank. The work would start tomorrow; he went to bed a happy man. 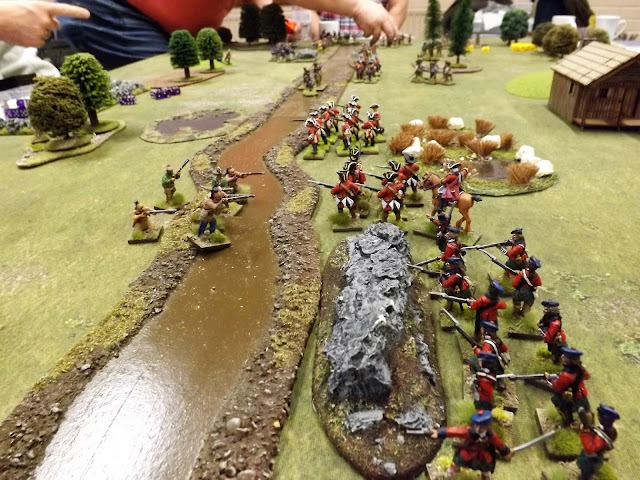 He was awoken by popping and banging sounds. He thought at first that it must be Independence Day celebrations but quickly realised that was impossible. He went to the window – and stood open mouthed. He knew the White Coats had lodged objections against his application; but this? The opposite bank was covered with them, together with some Natives. None of them looked particularly friendly. To the left of his homestead, opposite them, were some hairy men sporting skirts, and not doing much, unlike the Red Coats lining the river bank, who were busy popping away. To his front, apart from some Red Coat Natives running away on his side of the river, nothing much seemed to be happening, the White Coats having gone to ground in the appropriately named sheep enclosure on the opposite bank. But where in all this mess was his bridge? And then he saw it - and had to look again in disbelief. Far, far down stream, by the ford, the Red Coat engineers were erecting - a bridge. 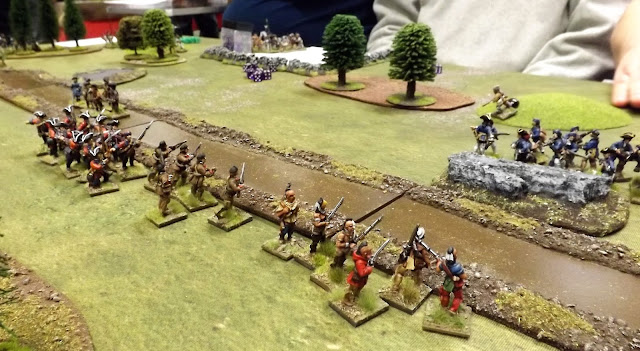 Maybe the White Coat Natives could dissuade them? Highly unlikely as the Red Coats had crossed the ford and were delivering crashing volleys into their rear. 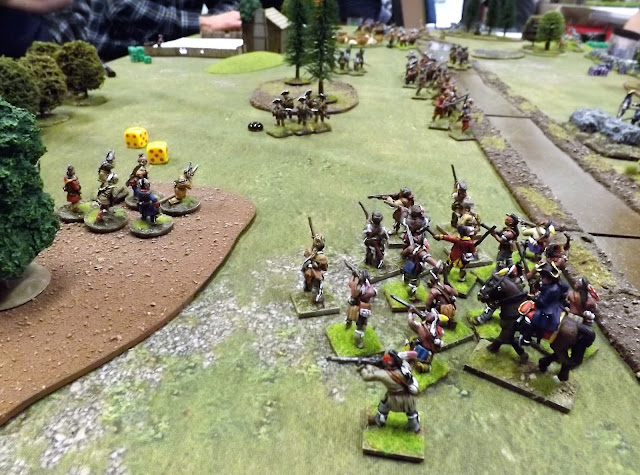 He was distracted by a cry of ‘Double Une’ to his left. The White Coat Natives, wearing not a lot, were charging across the river straight at the hairy men in skirts. He supposed it must be their battle cry as he had heard it several times from the White Coat’s side of the river. The Natives were finding it hard going crossing and eventually floundered to a halt. They’d have found it easier if there had been a bridge there, he thought wryly. The Natives sporting not a lot were no match for the hairy men sporting skirts. There was another cry of ‘Double Une’ and the White Coats, who seemed to have lost interest in the Red Coats, started using the White Coat Natives as target practice. ‘Pour encourager les autres,’ he assumed. It didn’t seem to be working as there were no White Coats, Native or otherwise, anywhere near the river. 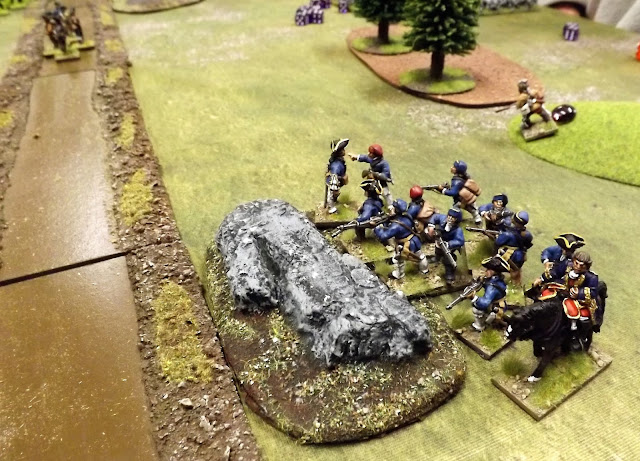 He watched in bemusement as a group of Red Coat engineers proceeded to start to erect another bridge – in front of his homestead. He found it hard to reconcile the two words, ‘Military Intelligence’. Another party of engineers was also coming into view from the direction of the ford. Maybe he would get his bridge after all. But something wasn’t quite right. With an uneasy feeling he peered again towards the ford – and realised there wasn’t a single Red Coat in sight. All he could see were some Natives, White Coat Natives, lots of them, on his side of the river, heading towards the engineers, or at least where the engineers had been. They too, like the Red Coats, had vanished. 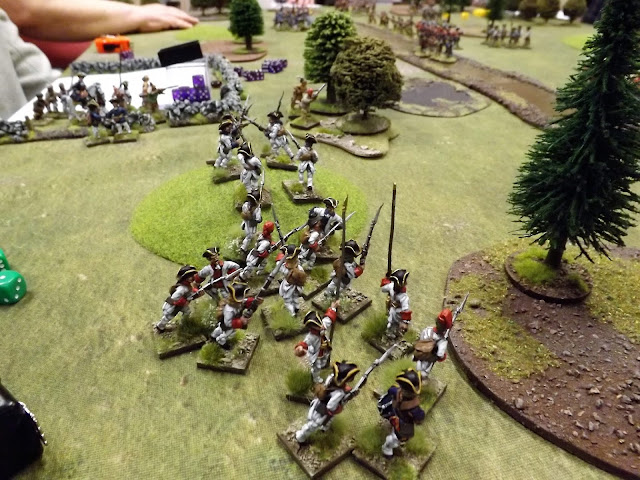 As had his bridge.

With a resigned sigh, he started to fill in another planning application form.

My thanks to Jason, Ian and Nathan, who gave me, Colin and John a damn good thrashing in both games, and of course, thanks to Steve M for organising the game and running it in such good spirit to
say nothing of his endless patience.
Posted by carojon at 16:10